Zoroastrianism And Persian Mythology: The Foundation Of Belief

Zoroastrianism was the main faith of the Achaemenid Persian Empire. Attributed to the prophet Zoroaster, this Persian religion was a key influence on both Christianity and Judaism. 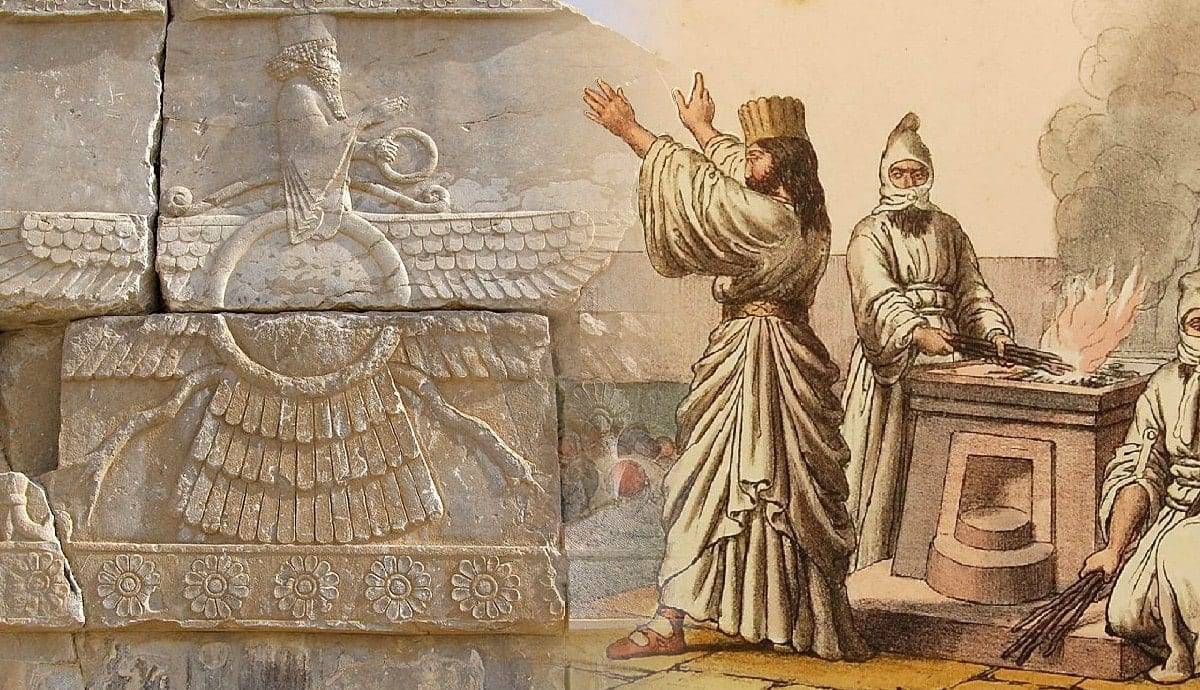 Zoroastrianism was the dominant faith of the Achaemenid Persian Empire. Developed centuries earlier by the prophet Zoroaster, this Persian religion spread across the empire. With a central belief in the supreme deity Ahura Mazda, Zoroastrianism is perhaps the first true monotheistic religion. Its teachings and mythology heavily influenced the Judaeo-Christian tradition, leaving a legacy lasting thousands of years. Here are the origins, central beliefs, rituals, and impact of Zoroastrianism.

Zoroastrianism became the main religion of the Achaemenid Persian Empire, but its origins precede it by around five centuries. This earlier Persian mythology has similarities with the Vedic tradition that would eventually develop into Hinduism. The Persians themselves were an Aryan people who emigrated to Iran from other parts of Asia, bringing this fledgling belief system with them.

Ahura Mazda was certainly present in Persian mythology before the development of Zoroastrianism. In this polytheistic mythology, he was seen as the leader of a pantheon of multi-faceted gods. He was the personification of light and good, battling the forces of evil led by Angra Mainyu. The purpose of mankind was to live according to Ahura Mazda’s teachings, whilst resisting Angra Mainyu’s temptations.

Ahura Mazda created both the physical and spiritual worlds. He did this in seven stages. First was the sky, then water and earth. Then he created plants and the Primordial Bull, the source of all animal life. Then he created the first human couple, and finally, he created fire. Angra Mainyu murdered many of Ahura Mazda’s creations. But Ahura Mazda simply used these setbacks to create more life, an idea that influenced many beliefs of Zoroastrianism.

The Religion Was Founded By The Prophet Zoroaster

Zoroastrianism was developed from this earlier Persian mythology by a prophet called Zarathustra, also known by the Greeks as Zoroaster. Following his father’s footsteps, Zoroaster entered the priesthood from a young age and seems to have been born into a relatively wealthy family. When he was around thirty, Zoroaster had a vision while performing a purification ritual.

On the other side of the riverbank, Zoroaster saw a glowing being who beckoned to him. The being called himself Vohu Manah, meaning “Good Mind”. He led Zoroaster to discover Ahura Mazda and his six spiritual beings called Amesha Spentas. They informed him that the old beliefs were falsehoods and that Ahura Mazda was the one true God. Zoroaster then began to spread his teachings and develop them over subsequent visions, each time asking further questions of Ahura Mazda.

There is debate amongst scholars about when Zoroaster preached his teachings. The consensus is that he dates between 1500 and 1000 BC. However, some scholars believe that Zoroaster was a contemporary of Cyrus the Great; the founder of the Achaemenid Empire. Despite his status as a prophet, Zoroaster himself was not worshipped.

In contrast to ancient Persian mythology’s polytheistic beliefs, Zoroastrianism recognizes Ahura Mazda as the one true God. This supreme being was believed to be the creator of the universe. He was omnipotent, omniscient, and omnipresent. Ahura Mazda is also known as the “Wise Lord”, and is the personification of all that is just and good.

As in ancient Persian religion, Ahura Mazda was opposed by Angra Mainyu, who was the essence of evil. Zoroastrians believed that Ahura Mazda granted humanity free will. With this ability, they could choose to either follow the good, pure teachings of Ahura Mazda or the path of falsehood and evil under Angra Mainyu.

Other ancient Persian deities that had surrounded Ahura Mazda were still acknowledged. However, Zoroaster instead saw them as representations of different aspects of Ahura Mazda – the six Amesha Spentas or “Holy Immortals”. These beings personified concepts such as “Asha”, or truth, which were central to the beliefs of Zoroastrianism.

The opposing forces of good and evil were also made up of “ahuras” and “daevas”. These were spirits, and many were based on older Persian gods such as Mithra, who later became the focus of Graeco-Roman cults.

Like many ancient religions, Zoroastrianism was primarily an oral tradition. Hymns and prayers were taught to the priesthood and passed down through the generations. The main holy text of Zoroastrianism is the Avesta. This is a collection of hymns, called Yasna-Gathas, along with prayers recited either by the priests or by common worshippers. These 17 songs came from Zoroaster himself.

Each individual Yasna is a hymn, while the Gathas are the wider groups each Yasna belongs to. Yasna translates as “devotion”. Alongside these hymns, the Avesta was split into several sections that evolved over time. A collection of 23 prayers called the Visperad accompanies the Yasnas.

The Yashts were 21 hymns devoted to the sacred elements of fire and water. Yashts were also dedicated to specific manifestations of Ahura Mazda that the worshipper sought to invoke for aid, such as Mithra. These spirits were often based on older Persian gods.

The Vendidad acted as the moral code of the Persian religion, determining rituals and acting as instructions for how one should live. This covered topics such as funerary rites, appropriate social behavior, and even personal hygiene.

This rich oral culture took the form of traditional texts after later generations wrote it down.

Zoroastrianism revolves around the idea of living through “good thoughts, good words, and good deeds”. The dichotomy of good and evil was a strong narrative. Living by the order and purity of Ahura Mazda, through one’s actions and words was considered a good life. Core concepts like “asha”, or truth, faced their opposites such as “druj”, or falsehood. Individuals had free will to choose their path.

As creations of Ahura Mazda, humans were seen as holding some essence of the divine. By following the path of truth and righteousness, humans could become closer to Ahura Mazda. To do so, people were encouraged to be honest and truthful, charitable, compassionate, and to be moderate in their behavior and diet.

Purity was also a strong concept in Zoroastrian belief. The elements created by Ahura Mazda, like water and fire, were seen as pure and should never be tainted. Zoroastrians saw nature as something to be respected and treated with love. They took great pains not to contaminate rivers or the soil, especially in regards to dealing with the body after death. Many animals were seen as sacred, especially dogs, due to their role in funeral rites.

Alongside an individual’s actions, religious services and rituals were also key to coming closer to Ahura Mazda. The pure, sacred elements of fire and water were key parts of these services, called Yasnas. This term applied to both the religious service as a whole and the individual hymns that were part of it.

The centers of Persian religion were the fire temples, which were likely widespread across the Achaemenid Empire. Examples have been discovered across the Middle East and Asia Minor. In these temples, a fire was kept alight at all times, often outside. The priests, also known as Magi, would recite prayers and sing hymns. Sacrifices were also offered, although these were mainly offerings such as food or treasured objects and talismans. Animal sacrifices were not a common part of Zoroastrianism, and Zoroaster himself reportedly disapproved of them.

These ritual services were often designed to give worshippers the continued strength to remain pure and resist the temptations of Angra Mainyu and his evil spirits. They also served as a chance for individuals to recommit to the path of “asha”, meaning truth and order.

Funeral Rites And Death In Zoroastrianism

Zoroastrianism held that all individuals had both free will and an immortal soul. After death, the soul would be judged according to one’s deeds. A life of “good thoughts, good words, and good deeds” would see the soul reunited with Ahura Mazda in Paradise.

But if it had succumbed to the deceitful temptations of Angra Mainyu, the soul would go to Hell. However, as Ahura Mazda was a benevolent being, all souls were reunited with him during the final judgment, regardless of whether they dwelled in Paradise or Hell.

When someone died, their soul was believed to stay close to the body for three days. During this time, the body was cleaned and prepared for death. A dog was then brought in to chase away any evil spirits or daevas. This would protect the nearby soul while it was undergoing judgment.

The body was then taken to a Tower of Silence, which were flat, open-air stone platforms also known as Dakhmas. The body was then left to be eaten by vultures and other birds of prey. Burial and cremation were considered to taint the sacred elements of earth and fire. The bones were then placed in ossuaries.

Zoroastrianism And The Persian Empire

With its deep roots in Persian religion, Zoroastrianism was the dominant faith of the Achaemenid Empire under Cyrus the Great and his successors. Through Persian conquests, Zoroastrianism spread into Mesopotamia and Asia Minor. It is highly likely that Persian kings like Cyrus, Darius I, and Xerxes I were devout followers of Zoroastrianism.

However, despite ruling over several ethnic minorities with their own faiths, the Persians did not force Zoroastrianism upon their subjects. Other native religions were allowed to remain, especially in satrapies like Egypt and Babylon. This tolerance was first demonstrated by Cyrus, who liberated the Jews from Babylon and allowed them to rebuild the Temple of Jerusalem. Cyrus built his rule around the idea of “asha”, or truth, and his tolerance of other faiths is synonymous with the core teachings of Zoroastrianism.

Persian kings frequently claim in their inscriptions that Ahura Mazda bestowed upon them a divine right to rule the Achaemenid Empire. This is especially true of Darius the Great, who mentions Ahura Mazda in the Behistun inscription. Darius claims that the rebellious rivals that he defeated after his accession were influenced by daevas, and were therefore in opposition to Ahura Mazda.

Zoroastrianism Is The Foundation Of Western Belief

Given the core practices and beliefs of Zoroastrianism, it is easy to trace how this Persian religion influenced the Judaeo-Christian tradition. Zoroastrianism represents the first monotheistic belief of a single, supreme God. This is not only its biggest connection with Judaism and Christianity but also with Islam. The dichotomy between good and evil is also a central shared component between these religions.

Biblical concepts such as Heaven and Hell, angels and demons, Judgement Day, and the Rapture all draw direct influence from Zoroastrianism. Jewish and Christian figures like Adam and Eve not only have roots in Zoroastrianism but also in the ancient Persian mythology that preceded it. The archangels may have been derived from Ahura Mazda’s Amesha Spentas – immortal spiritual beings that carry out the will of a single all-powerful God.

This point of influence can probably be traced to when Cyrus the Great freed the Jews from captivity in Babylon. Thanks to Persian conquest, Zoroastrian concepts filtered down into early Judaism. When Cyrus allowed the survivors to return to Jerusalem and rebuild their temple, they created the Hebrew bible, probably drawing influence from Zoroastrian teachings.

By Edd HodsdonBA Professional Writing, member Canterbury Archaeological TrustEdd holds a BA in Professional Writing, he has worked at the Dover museum as well as the Canterbury Archaeological Trust. He is most fascinated by the Achaemenid Persian Empire and has been interested in the Ancient world his entire life. His hobbies include walking, philosophy, history, photography, and writing fiction.

Kings of Persia: These 12 Achaemenid Rulers Led an Empire