Facts you may not have known about David, Michelangelo’s masterpiece and one of the most famous monumental sculptures ever created. 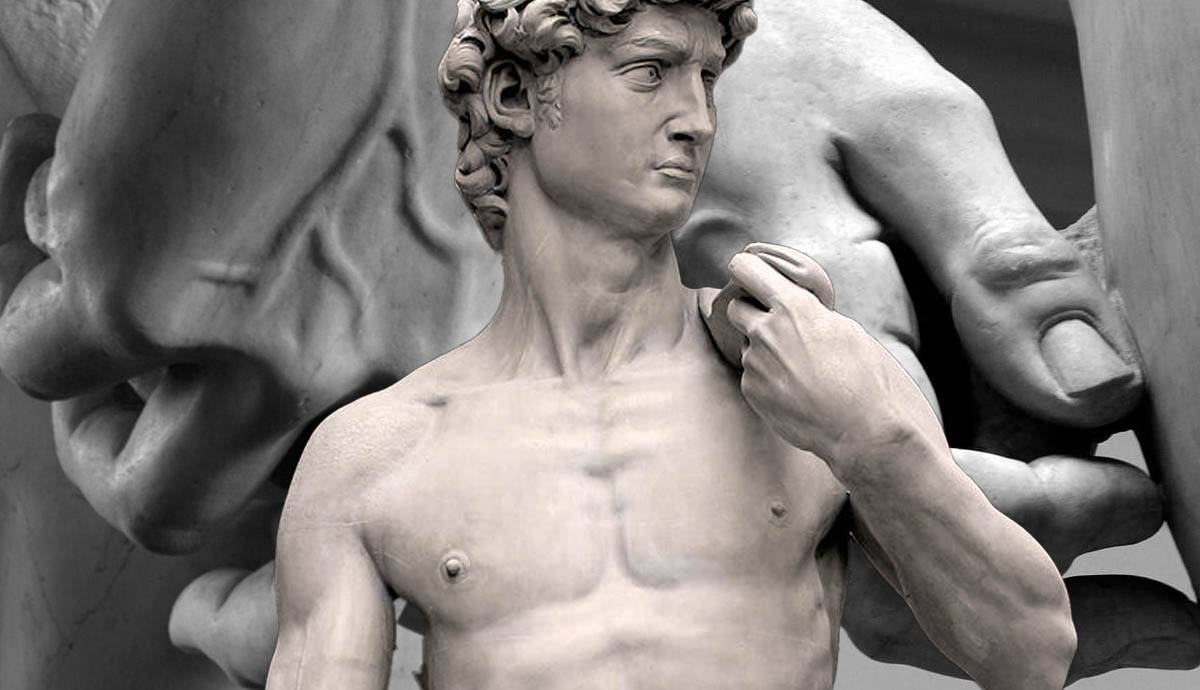 Michelangelo’s David, the colossal marble statue representing the biblical tale of David and Goliath, has become a modern institution. Its craftsmanship, attention to detail and idealized body have captivated audiences for hundreds of years, and it has become a symbol of Renaissance art and the classical style. The statue secured Michelangelo’s position as one of the most famous Renaissance artists, keeping his legacy alive for centuries after his death. Below are some facts highlighting the colorful history behind the Renaissance’s most beloved masterpiece.

1. Michelangelo’s David Was Sculpted From One Massive Block Of Marble

The massive 17-foot-tall statue weighs 6-tons, the equivalent of around 90 adults. It is carved from a single slab of white marble from the quarries in Carrara, Tuscany. So, David is quite a tall sculpture!

2. Michelangelo Was The Fourth Sculptor To Work On David

The slab was originally commissioned in 1464, worked on by Italian sculptor Agostino. After shaping just the legs, Agostino stopped working on the statue. Work was then resumed by Donatello and later Antonio Rossellino. After both artists ceased work on the block, it was left unattended for 26 years. In 1500, the Operai began to search for an artist to complete the project on the marble slab, which had been nicknamed the ‘giant.’ Although other famous Renaissance artists, such as Leonardo da Vinci were considered, Michelangelo won the bid, completing David in 1504 at the age of 29.

3. He Is Portrayed Without Goliath

Previous representations of David in Renaissance art portrayed him in conflict with or in victory over his biblical enemy, Goliath. In famous depictions by Donatello (1440) and Verrocchio (1473-75) as well as other artists, David is shown standing, sword in hand, over the severed head of Goliath. However, Michelangelo’s David stands alone, supposedly in the moments preceding his battle with Goliath. This unprecedented technique inspired later Renaissance artists such as Bernini, who completed a David sans Goliath in 1624.

4. David Was Meant To Be On The Roof Of A Florentine Church

David was originally meant as part of a series of prophetic statues positioned on the roof of Florence Cathedral. However, due to the sheer size and weight of the statue, getting it to the roof of the Cathedral posed a challenge. A committee that included famous artists such as Leonardo da Vinci, Botticelli, Giuliano da Sangallo, Filippino Lippi, Cosimo Rosselli and others was subsequently formed to decide where the statue would be placed instead. The committee decided that David would be installed in the Piazza della Signoria, now called Palazzo Vecchio. Today, however, David stands in the Galleria dell’Accademia in Florence.

5. The Statue Has Been A Symbol Of Civil Liberty In The Past

The story of David and Goliath is a typical underdog narrative, in which the seemingly weaker opponent defeats an imposing villain. This message deeply resonated with the Florentine people, as the Republic of Florence was threatened by several surrounding city-state powers and the Medici hegemony. Michelangelo’s David became a symbol of Florentine liberty and identity, as said by Giorgio Vasari, “this was intended as a symbol of liberty for the Palace, signifying that just as David had protected his people and governed them justly, so whoever ruled Florence should vigorously defend the city and govern it with justice.” It was even said that his wary glance was purposefully directed towards Rome in order to watch over Florence.

6. David Has Suffered Both Natural And Inflicted Deterioration

In 1527, David was hit by a chair thrown by rioters in the Piazza della Signoria during an anti-Medici protest. The chair damaged the statue’s arm in several places. In 1991, an Italian artist named Piero Cannata attacked the statue. After smuggling a hammer into the Galleria dell’Accademia, where David is held, he smashed off one of the statue’s toes with it. He later claimed that a model for Renaissance artist Paolo Veronese had told him to do so.

David’s weathering over time has also been attributed to heavy tourist traffic. Millions of viewers come from all around the world to visit the statue at Galleria dell’Accademia, and their footsteps around the statue create small, almost constant vibrations. These miniature, earthquake-like vibrations have worn down and cracked the marble of David’s legs, prompting restoration work.

David perfectly embodies the rejuvenation of ancient Greco-Roman art and culture in 15th century Florence. Based on monumental statues from the Classical and Hellenistic periods, his naturalistic, idealized body harkens back to the Apollonian youth male in many ways. He also stands in the archetypal classical contrapposto, with his weight shifted to the side and his hip protruding. It has also been said that David is meant to depict Hercules, a hero who has been closely linked with Florence and had appeared on the Florentine seal.

8. David Has Been Censored

In 1857, Queen Victoria was given a nude replica of David by the Grand Duke of Tuscany. However, she was so shocked by the nudity of the statue that she ordered the attachment of a plaster fig leaf to cover its exposed genitals before being placed in the Victoria & Albert Museum. As the same technique has been used to cover Adam and Eve’s genitals in numerous depictions of the pair, the leaf is said to symbolize the transition from Greco-Roman ‘heroic’ nudity to Christian censorship.

Historians, academics and viewers have always thought of David as the epitome of classical and artistic perfection. However, Stanford University’s Digital Michelangelo Project revealed that the statue’s eyes point in different directions; his right eye looks off into the distance while the right remains fixed forward. This flaw remained unnoticed for hundreds of years, and is claimed by some to be the intentional work of Michelangelo to give the statue an imperfect attribute.

10. No One Knows Who Really Owns Michelangelo’s David

In 2010, a legal battle commenced between the city of Florence and the nation of Italy over who really owned David. The statue has resided within the Galleria dell’Accademia, a state-run institution, since 1873, where it has been maintained, protected and restored until now. However, the statue was commissioned and made in and for the city of Florence, and the city has maintained the statue in Piazza della Signoria for 500 years prior to its move indoors. The dispute has yet to be resolved, leaving David between the city and the nation.