A deeper look into the development of ancient Greek art and sculpture through time, covering various styles, forms and mythological contexts. 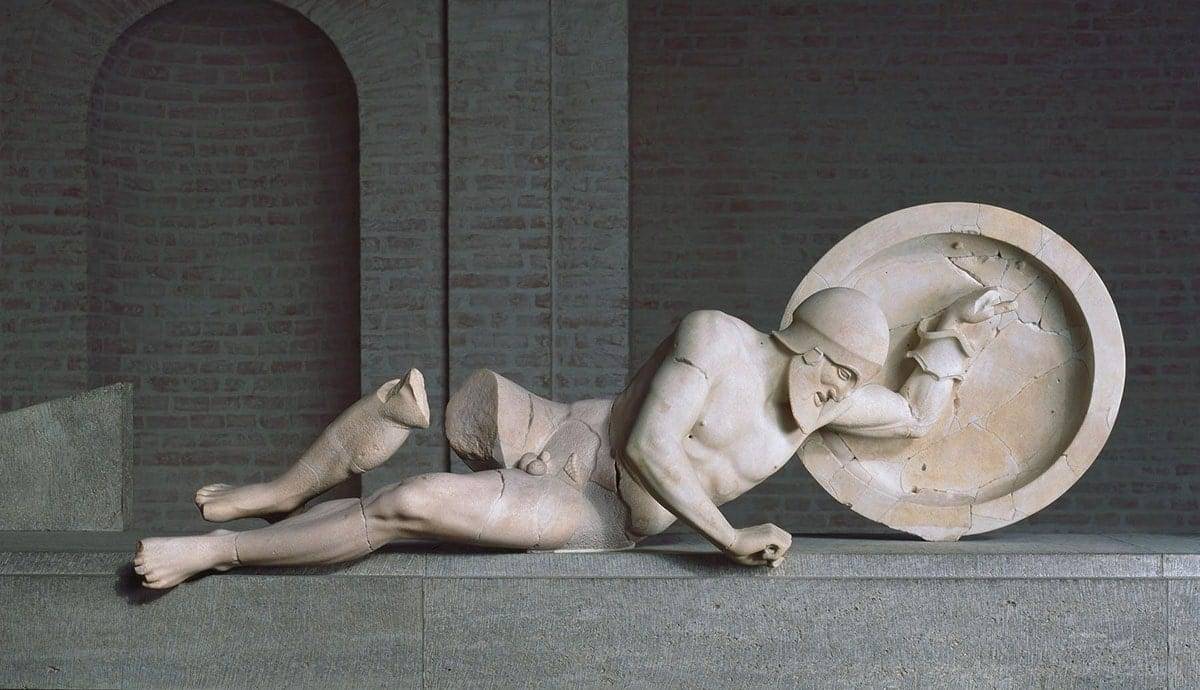 Ancient Greek sculpture has continued to fascinate throughout the Roman Empire, the Renaissance, the Grand Tour, and today’s modern audiences. Numerous later copies of ancient Greek originals remain in museums all over the world, attracting millions of viewers. These sculptures have become symbols of western society, intellectualism, and history. Below details the timeline of ancient Greek sculpture through time, wars, and leadership changes.

Following the Greek Dark Ages, the Archaic Period can be characterized by increased interaction with Egypt and the Near East regions. Historically speaking, this period featured the heightened exposure of several autonomous city-states and cultural groups and thus increased trade and influence.

This cultural shift manifested in two main types of monumental Greek sculpture. The first of these is the upright nude male, known as kouros or plural kouroi, meaning ‘youth’ or ‘boy’. Kouroi were free-standing statues that represented quasi-naturalistic young men. They were often used as tombstones to commemorate the deaths of young men or as trophies in games.

Kouroi were widely known for their rigid body posture and idealized bodily form. They stood upright and frontal with wide shoulders, narrow hips, legs together and arms often at the sides. They also held the archetypal ‘kouros smile’, characterized by a blank expression and a mouth that was slightly upturned at the sides.

Early kouroi embodied the Egyptian artistic style in many ways, depicting the more geometric, rigid characteristics widely seen in ancient Egyptian sculpture. However, as time went on the Greek kouros evolved into a more naturalistic, classicizing figure with smoother edges and a fuller figure. Additionally, unlike their Egyptian counterparts, Greek kouroi did not hold religious significance and appeared nude rather than clothed.

The second type of Greek sculpture in the Archaic period was the female version of the kouros, the kore or plural korai. Like kouroi, korai are upright standing statues with stiff frames, narrow hips, and blank faces. However, unlike the kouroi, the kore is draped, ornamented with jewelry, a dress, and sometimes a crown or headdress. They also hold fruits or other symbols of female fertility in front of them.

The Classical period in Ancient Greece saw the end of the aristocracy, the dissolution of the Athenian tyranny in 510 BC, and then later the introduction of Athenian democracy. It began with the Persian Wars in the 5th century BC and ended with the death of Alexander the Great in the 3rd century BC. Although a time of conflict, the intellectualism and creativity of the Classical period produced a plethora of memorable works of art and has even been considered a ‘golden age’.

Classical Greek sculpture incorporated more diverse figure types and bodily poses as well as a sharp increase in technical dexterity, resulting in far more naturalistic and realistic sculptures compared to their Archaic predecessors. It was also noted as the first period to represent individuals in sculpture rather than the archetypal ‘young male’ like the kouroi of the Archaic period.

Statues were used as a study of anatomy, often depicted in motion with extending musculature. The classical contrapposto, or the curved body position, was also introduced during this period. This has been most notably seen in the Kritios Boy (480 BC), which stands with a slight weight shift to the one side and his hip protruding. The contrapposto subsequently became one of the most iconic classical bodily poses used in artistic depictions of the body.

The Classical period also featured an increase in sculpture purpose; statues famously decorated buildings such as the Parthenon and the Erechtheion within the Athenian Acropolis, as well as buildings at the ancient Greek cities of Olympia and Delphi. This included not only free-standing votive sculptures such as The Athena Parthenos (447 BC) or The Charioteer of Delphi (ca. 478 BC) but also the decoration of pediments and friezes, such as the Parthenon Frieze (ca. 440 BC), which is now on display at the British Museum.

The Hellenistic Period began after the death of Alexander the Great in 323 BC and ended at the Roman conquest of Greece in 146 BC. It has been seen as a continuation, refinement, and expansion of Greek, or Hellenistic, influence in the Mediterranean world after Alexander the Great. This period boasted a geographically and culturally diverse group of people under the umbrella of Hellenism, resulting in considerable artistic variation.

Hellenistic Period sculpture can be characterized by a marked increase in expression from Classical sculpture. Many artistic subjects appear significantly more dramatized than before and for the first time emotive facial expressions featured in monumental sculpture. While the Archaic and Classical periods focused on idealized subjects and figures, the Hellenistic embraced adverse themes such as suffering, old age, and death. Artists no longer clung to the ideal of physical perfection, exploring other artistic avenues.

Ancient Greek sculpture continued to gain variety in subject matter. Artists began to portray people and situations that extended beyond that of the votive or commemorative nature. Hellenistic portraiture explored the world of Dionysia in monumental sculpture, which had not been previously done. Satyrs, maenads, fauns and other mythical creatures were depicted, sometimes even in a comic or ironic way. These unorthodox subjects represented a more diverse, post-Alexandrian Hellenistic population.

The Hellenistic period also saw an increasing fascination with anatomy and detail. Monumental sculptures were crafted with extreme detail to the human muscular system. Rather than the more rigid, upright poses of the Classical period, Hellenistic sculptures often appeared to be in motion or positions to accentuate the details of the body.

The same precise attention to detail was applied when sculpting details such as hair or clothing, which have continued to captivate viewers into the modern age. The most famous among these is the ‘wet drapery’ detail, meant to accentuate the bodily features of the drapery’s wearer.

Another marked shift in the Hellenistic period of Greek art was the privatization of art and sculpture. The centralization of government at the time led to a more strict stratification of social classes. The wealthier groups could afford to purchase sculptures for their private homes. This could have accounted for the increased variation within monumental sculpture, as certain sculptures were likely commissioned for domestic pleasure.

One of the main avenues for classical rebirth was the monumental style sculpture. Numerous Renaissance sculptors forged Classical and Hellenistic sculpture as a return to the ‘high culture’ of ancient Greece and Rome. Michaelangelo’s David (1501-04 AD) stands 17 feet tall and weighs over 12,000 pounds. It is one of the most famous sculptures of the Renaissance period. Crafted in white marble and carved from a single block, the Apollonian figure stands in a classical style contrapposto with one hand towards his chin.

The reiteration of ancient Greco-Roman style sculpture has since remained prominent into the modern world as a symbol of status and intellectualism. One may find classical style statues on display in palace gardens or estates, such as the garden at the Palace of Versailles. Ranging from film to visual art and architecture, ancient Greco-Roman sculpture continues to be prominent in contemporary culture.