HomeArtistsEverything You Should Know About Louise Bourgeois’s Textile Art

Everything You Should Know About Louise Bourgeois’s Textile Art

Louise Bourgeois started working with textiles when she was a child. As an artist, she returned to the medium late into her career. 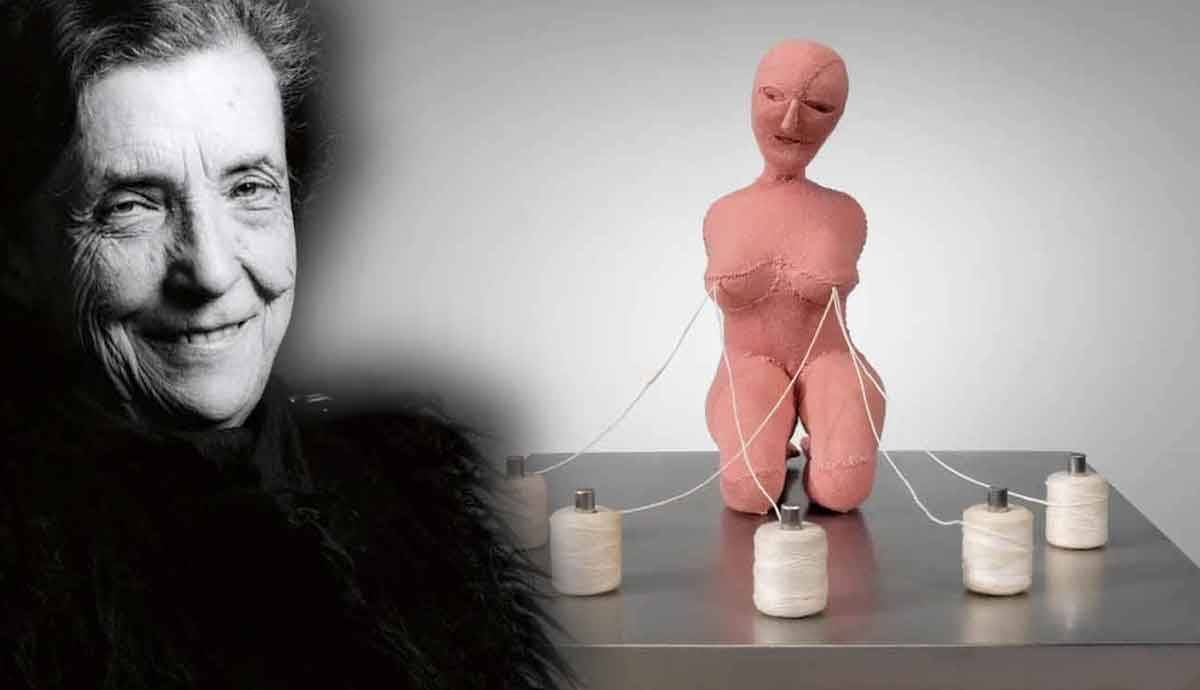 During her long career, the French-born artist Louise Bourgeois worked in several mediums. Even though her use of materials changed over the years, she continuously explored themes such as childhood trauma, fear, loneliness, sexuality, and motherhood. Louise Bourgeois’s textile art marked the late period of the artist’s career. Her pieces of fabric summon memories of her childhood while representing aspects of her adult life, her own experiences with motherhood and giving birth, and the complicated nature of relationships.

Louise Bourgeois was born in 1911 in Paris as the daughter of tapestry weavers. Her family had their own tapestry restoration workshop and Bourgeois often helped with the reparation of old textiles. She even made her first drawings for her parent’s business. Bourgeois first went to Sorbonne University to study mathematics, however, she later decided to study art. She married an art historian called Robert Goldwater and moved to New York in 1938. She would live in New York until her death in 2010. Today, Louise Bourgeois is probably best known for her large spider sculptures. In the last 20 years of her life, however, she returned to the material of her childhood: textiles.

Bourgeois made her textile works using tapestries, clothing, and fabrics from her own household. The clothes that she used came from all stages of her life. In 1995 she mentioned this trend by saying The beautiful clothes from your youth – so what – sacrifice / them, eaten by the moths. She asked her assistant Jerry Gorovoy to take the clothes that were tucked away on the upper floors of her home and bring them down to her studio in the basement. She sorted these by color and picked out the pieces that were meaningful to her. The clothing that she found significant was kept intact for pieces like the Cell installations. The other pieces of clothing were cut, modified, and turned into completely new forms.

Louise Bourgeois: The Woven Child at the Hayward Gallery

The 2022 exhibition Louise Bourgeois: The Woven Child at the Hayward Gallery in London was dedicated to Bourgeois’s textile art. The extensive exhibition included about 90 textile artworks made by Bourgeois during the last two decades of her life. It even included four works the artist created during the last five years of her life. These last works were made to examine the relationship between the psyche and the body, the unconscious and conscious, and the possibility to repair and break things. The exhibition featured body parts made out of fabric and clothing.

Rozsika Parker, the author of the book The Subversive Stitch: Embroidery and the Making of the Feminine, mentioned Bourgeois’s textile art as a significant example of how a medium that was traditionally disregarded as women’s work gained the status of fine art. According to Parker, Bourgeois’s work explores the deep association of fabric with female sexuality, the body, and the unconscious.

Bourgeois started working with textiles early in her life, due to her parents’ tapestry workshop. For Parker, Bourgeois’s work with textiles can therefore be interpreted as a representation of how female sexuality develops during childhood and in the family. Her works made out of fabric depict couples having sex, pregnant women, the subject of birth, as well as vulnerable and painful feelings.

Bourgeois once wrote about how the women she grew up with were all doing needlework. This caused the artist to develop a fascination with the needle and its magic power. She associated the needle with reparation and forgiveness. For Rozsika Parker, however, Bourgeois’s textile art is also evocative of destruction and aggression.

Sexuality, motherhood, and pregnancy are recurring themes in Bourgeois’ work, therefore they also made their way into her textile art. The artist was aware of the sexual connotation of her pieces and said that the female body and its various shapes played an important part in her work. She often combined male and female bodies, for example by creating phallic breasts. Bourgeois’s work also often featured couples in sexually suggestive or explicit situations. Her figures made out of fabric were no exception. Her piece Couple IV shows two black fabric dolls embracing and lying on top of each other inside a glass cabinet. Alice Blackhurst wrote for The Guardian that the work comments on the oppressive nature of intimate relationships, but it is also a testament to our longing for closeness.

The portrayal of motherhood becomes visible in works like The Good Mother. The figure’s breasts are connected to five spindles through pieces of string. The strings seem to represent the process of breastfeeding and nurturing a child. The title of The Good Mother suggests that the work discusses society’s expectations of mothers as perfect and loving.

Louise Bourgeois did not abandon her iconic theme in her textile art. The spider is often understood as a symbol for the artist’s mother who, instead of webs, weaved tapestry. To Bourgeois, spiders were also the embodiment of protection and reparation, but they were also predatory. Her friend and assistant Jerry Gorovoy stated that the artist’s early work was inspired by her relationship with her father.

Bourgeois’s textile art, however, was about her identification with her mother and her occupation as a seamstress and a tapestry worker. This change marked a shift in the artist’s work. In a poem from 1995, Bourgeois associated her mother with a spider since they both share many qualities like cleverness, patience, and a soothing nature. Bourgeois integrated spiders into her textile pieces. Her Lady in Waiting from 2003 features a chair and a small doll made of fabric sitting on it. A slender, silver spider is crawling on top of the doll.

Bourgeois’s Spider (Cell) is the artist’s first piece where the spider’s web functions as a cell. Viewers are supposed to go into the cell and sit down on the chair inside. This way, they are under the protection of the motherly spider. The piece includes a tapestry panel.

Bourgeois’s cells often feature ordinary objects like clothing and furniture. Her assistant Jerry Gorvoy said that the artist was afraid of throwing things away, especially the objects that were valuable to her. Bourgeois’s cells therefore also discuss the notion of memory. The objects that were once significant to the artist still live on in her art.

The piece The Reticent Child from 2003 consists of six small figures placed in front of a concave mirror. The work’s subject revolves around the pregnancy and birth and early life of Louise Bourgeois’s youngest son Alain. The piece was made for an exhibition held at the Freud Museum in Vienna. The installation includes the display of a pregnant woman, a womb, a fetus shining through the body of a pregnant figure, a woman giving birth, and a man burying his head in his hands while standing in front of a bed with a child lying in it.

The figures are all made of fabric and sewn by hand, except for one figure representing the child lying in bed, which was made from marble. In a text accompanying the installation, Bourgeois described her son Alain as a child who refused to be born which made him, as the title suggests, a reticent child.

The work called Self Portrait is a late example of Louise Bourgeois’s textile art. It was made only a year before the artist’s death. Self Portrait is part of a series of eight clock works that Bourgeois made in 2009. The fabric-based collage depicts the artist’s life in the form of a clock. The clock starts with an image of a young Louise Bourgeois and shows her development through depictions of adolescence, relationships, pregnancy, and other recurring topics of the artist’s oeuvre. The images used in this self-portrait were printed onto pieces of fabric, which were then stitched onto a larger sheet. The hands of the clock point to the numbers 19 and 11 since 1911 was the year when Bourgeois was born. The letters L and B are embroidered at the bottom of the sheet.