HomeAnswersAncient Roman Coins: How Were They Made? 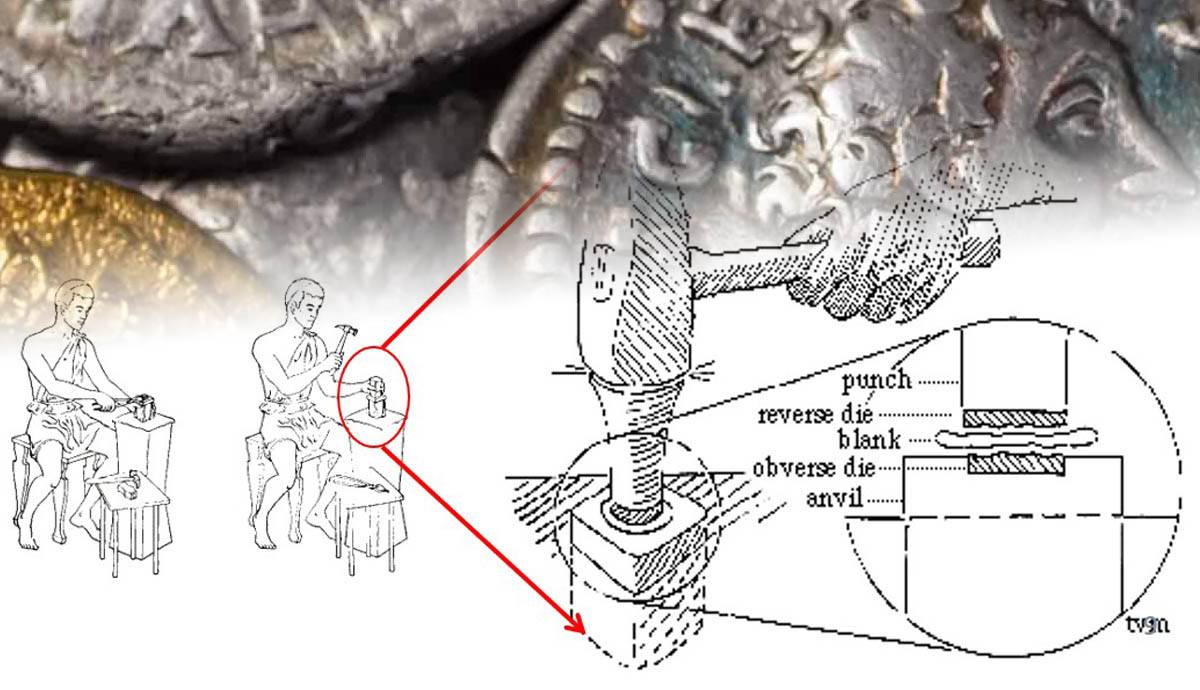 In today’s culture coins have become almost obsolete, as we increasingly rely on bank cards, online shopping and mobile phone apps. But back in ancient times coins were the only form of currency available, making them very valuable indeed. The same coin currency was used across the entire Roman empire, which meant Romans could spend their hard-earned money in some pretty far-flung places, particularly as the empire grew. Today ancient coins are sought-after collector’s items that only continue to increase in value. But how, exactly, did they make these much-prized objects, which don’t look so different from the coins in circulation today? Let’s take a closer look at the processes they discovered for making their finely detailed currency.

Romans made coins out of flat, round discs, or ‘mints’ of pressed metal, developing a technique now known as minting – in fact, we still use the term ‘minted’ to describe someone rich today! Nowadays the minting process is all done by machines in factories, but the Romans made their minted coins entirely by hand. They were made in a workshop space known as a mint, resembling a blacksmith’s shop. Early Roman coins (from the 200s BCE) were made in bronze, but they later evolved to include silver, gold and copper in the coin-making process. The most popular and prevalent coin of the Roman Empire was the denarius, made from pressed silver; it remained in circulation for an astonishing five centuries. When making their coins, Romans used two different processes on metal – cold striking and hot striking.

The cold striking process involved striking coins out of a cold, unheated sheet of metal, to create round discs that were flat on both sides. Sometimes these were then pounded flat on a metal anvil to make sure they were really nice and smooth, ready for the next stage of the process.

Making coins using hot striking was quite a different process. Metal was heated in a hot fire or furnace. It was either melted into a liquid and poured into molds, or softened and rolled into large sheets, which were then pounded into shape on an anvil. Specialist tools were needed, such as tongs to hold the metal sheets and hammers for all that pounding and flattening.

In the next stage of the process these plain minted discs needed to be decorated, and it was this that gave them the real finishing touch. Dies, or heavy stamps made of bronze and iron, were engraved with the details of the coin face, and these had to be pounded onto the flat mint to leave an impression. The metal discs were heated to soften it beforehand. Much like today, Roman coins had different images on each side, meaning both had to be pressed onto the coins. Romans came up with an ingenious system for doing this, by using a hinged die that had one image attached to the top, and another to the bottom (like the inside pages of a book cover). The mint disc could be slipped in between them, clamped tightly shut, and pounded from above. Pretty efficient, eh?

Two or Three Workers Were Needed to Impress Stamps Onto Coins

Impressing images onto coins was an exacting process that required two workers. One would put metal discs or sheets into the die and clamp it shut, while the other would pound it with a hammer to make an impression onto the coin. After this, the impressed coin would then be passed on to a third party, a master engraver, who would go over each coin and make sure they were perfect. He would also add fine details such as lettering and curls of hair, making each one a true work of art – no wonder they were so valuable!

Roman coins had different features on the front and back. As we still see in the coins of today, the front face of ancient Roman coins featured a portrait, usually of a Roman emperor or noted leader, or one of their family members. This was most often a profile view, with descriptive text around them. One the back of the coin, images varied from battle scenes to religious messages, or even former revered emperors. To round things off, a code identifying the city that minted the coin was added in, giving us fascinating historical insight into the busiest and most prosperous areas of the ancient Roman Empire.