To commemorate and celebrate the imperial expansion, emperors issued coins that spread the idea of Roman might and dominance to all of their subjects. 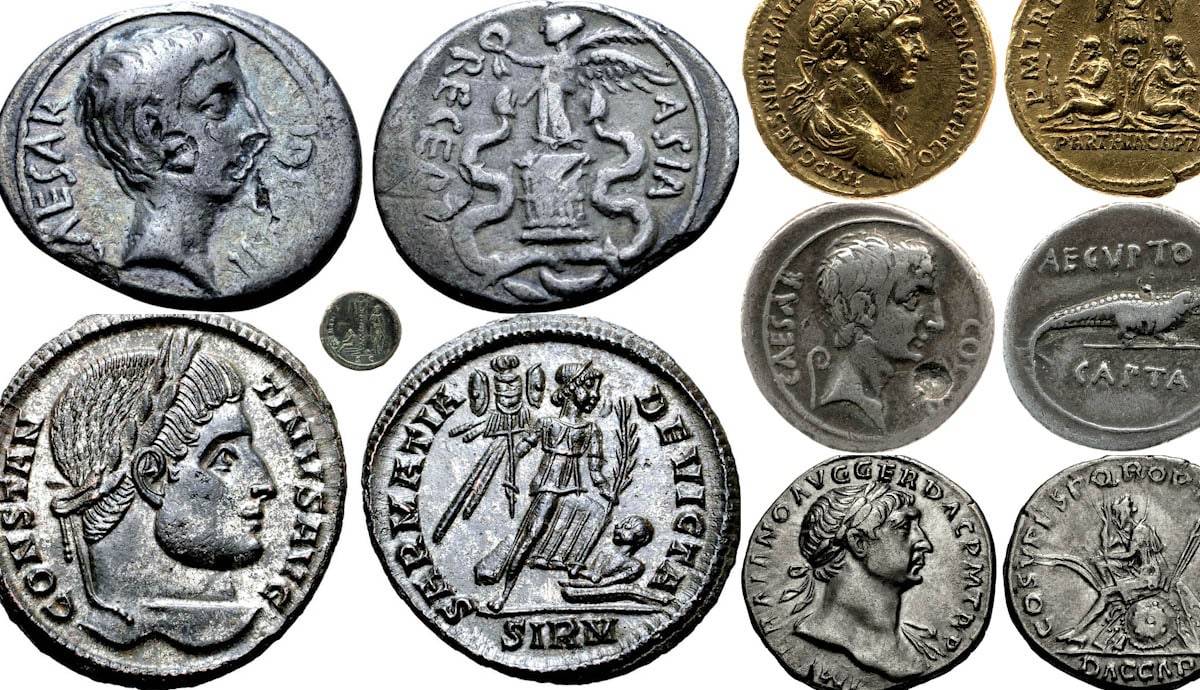 Rome’s territorial expansion was synonymous with conquest. Their territorial gains were celebrated with majestic triumphs and magnificent monuments, displaying the might of Rome, its leaders, and their armies. However, not everyone lived in the capital, or in the Empire’s major cities. The most efficient way to promote the emperor’s splendid achievements was through coinage. Small and light, Roman coins could easily reach all corners of this enormous Empire, allowing the populace to familiarize themselves with the ruler, whom they would never see in person. While all types of coins played a role in promoting the emperor and his policies, the coins celebrating conquest were essential. Through the combination of carefully chosen images and legends (text) on the obverse (front) and reverse (back), the coins sent a powerful message to the populace — the tale of Rome’s triumph and superiority across the known world.

Wealthy and powerful, ancient Egypt was a tempting target for any conqueror. Thus, it should not surprise us that the Romans had their designs on the “gift of the Nile.” The weakening of Ptolemaic power brought Rome to Egypt’s doorstep. Literally. In 48 BCE, following the murder of his rival Pompey the Great, Julius Caesar arrived in Alexandria. There, he got embroiled in a dynastic struggle between Cleopatra VII and her brother Ptolemy XIII. In the ensuing civil war, Caesar’s legions backed Cleopatra, securing her the Egyptian throne. Caesar’s death, however, led to the last war of the Roman Republic, between Mark Antony and Octavian. After the Battle of Actium in 31 BCE, Antony and Cleopatra committed suicide, leaving Octavian the sole ruler of the Roman world, and an emperor—Augustus.

The fall of the Ptolemaic Kingdom left Egypt in Roman hands. Unlike other provinces, Roman Egypt became the emperor’s private estate, the breadbasket of Rome. To mark the conquest and annexation of the wealthy Mediterranean region, in 28-27 BCE, Octavian issued a series of golden and silver coinage — the first Roman coins explicitly glorifying conquest. Like the rest of the ancient currency, the coin bears the ruler’s (Octavian) portrait on the obverse. The reverse, however, is a novelty. The legend, clearly visible to an observer, proudly proclaims — AEGVPTO CAPTA (Egypt Captured). The accompanying image of the crocodile hammers home the importance of the conquest. The Nile crocodile was a symbol of ancient Egypt. In addition, the ancient Egyptians considered the large reptile to be a child of the crocodile-headed god Sobek. He, in turn, was the protector of the pharaohs and the Ptolemaic rulers.

The Nile crocodile appears on another Roman coin, which commemorates the conquest of Egypt. Unlike the earlier example (issued for the occasion), the famous dupondius of Nimes continued to be struck for several decades, from 29 BCE up to 10 CE. The obverse is reserved for a joint portrait of Augustus and Marcus Agrippa, signifying the importance of the alliance between two close friends and colleagues. The motif used on the reverse, however, is a crocodile chained to a palm tree. The Dupondius was a copper coin of low value, widely used in everyday transactions. Thus, this Roman coin acted as an important medium in reminding the public of Octavian’s great victory over Cleopatra, the last of the Ptolemies, and the subjugation of Egypt.

Not all the Roman conquests were actual military endeavors. In 30 BCE, Octavian became the sole ruler of the Roman world. Among Mark Antony’s former territories that came under Octavian’s control was Anatolia, a wealthy and urbanized region filled with towns that could trace their origins to the Classical Greek period or even beyond. It was an ancient and proud land, which saw its share of great rulers and conquerors. But, more importantly, the area was an integral part of Roman territory since Pompey the Great’s defeat of Mithridates VI, the king of Pontus, in 63 BCE.

Yet, Octavian decided to commemorate his takeover of Asia Minor with the special issue of a small silver Roman coin. The legend on the reverse — ASIA RECEPTA (Asia Recovered) — does suggest that the Roman authorities did not want to stir up trouble among the inhabitants of the region. Octavian’s regime was not a violent occupation. Instead, it was a peaceful reintegration of the renegade territory into one unified domain.

The motif chosen to illustrate the message was cista mystica, flanked by two serpents and topped by the figure of Victory. The image of Victory is self-explanatory. This brings us to a key motif intended for the Greeks living in Asia Minor. The cista mystica, the sacred casket containing a live snake, was a ritual object used in the secret rites of Dionysus. It was also a motif adopted by many Asian cities as the reverse design for their silver coins. Thus, its appearance on the Roman coin guaranteed the preservation of the Hellenistic towns’ rights and customs and a prosperous and bright future under new management.

3. Parthia Capta: Triumph in the East

Throughout its long history, Rome fought numerous wars against many of its rivals and enemies. But there was one adversary whom Rome considered almost as an equal — Persia. The wealthy and powerful empire was a tempting target for many Roman generals and rulers. The greatest victory and glory could be achieved in the East. However, Persia was a hard nut to crack, and instead of success, most would-be-conquerors — from Crassus to Emperor Julian — found their doom.

One of the few Roman leaders who waged a successful campaign in the East was Emperor Trajan. In his 115-117 CE campaign, Trajan crushed the Parthian Empire, leading the Roman legions to the shores of the Persian Gulf. To commemorate this splendid achievement, Trajan decided to issue a special gold coin. The Roman coin, minted in 116 CE, proudly proclaims PARTHIA CAPTA (Parthia Conquered). The text is accompanied by the usual image of bound captives seated among tropaeum — captured weapons and armor. Unfortunately, Trajan’s victory overstretched the Roman Empire. The Romans never occupied the territories around the Persian Gulf, withdrawing to the Euphrates instead. Parthia would eventually recover, continuing to trouble Rome for more than another century before being replaced by an even more dangerous Sassanid Empire.

4. Dacia Capta: Across the Danube

Under Trajan, the Roman Empire reached its greatest territorial extent. While the push in the East turned into an overstretch, Trajan’s campaign over the Danube got Rome both new land and gold mines of Dacia (modern-day Romania). Further, the conquest of Dacia (101-102 and 105-106 CE) was the last major territorial addition for the Empire. The great achievement was immortalized in Rome, with the erection of the famous Trajan’s Column. The monumental pillar, however, could only be seen by a limited number of people. So Trajan turned to a proven method to spread the message across his vast Empire — the Roman coinage.

The legend on the silver coin boasts DACIA CAPTA (Dacia Captured). Interestingly, the text is abbreviated, being just a smaller part of the entire inscription. Several versions of the image accompany the legend, some carrying strong military connotations, like the emperor trampling a kneeling Dacian, or receiving a shield as a symbol of Dacian submission. However, the most powerful motif is the mourning personification of Dacia, seated on a pile of captured weapons, weeping. The message to the Roman subjects was clear — the emperor and his army triumphed, humiliating and defeating the enemy, erasing from the map the powerful Dacian Kingdom, now only one of Rome’s many provinces.

For centuries, the Danube and Rhine rivers formed the northern border of the Roman Empire. Across the waters was “barbaricum”, the area inhabited by the barbarian tribes who periodically invaded the imperial lands. When Rome tried to push the boundary over the Rhine river (into the area known as Germania Magna), the result was a disaster. In 9 CE, in the Battle of Teutoburg Forest, three Roman legions were wiped out, never to be reconstituted again. While the imperial army ventured into Germania on several occasions, those were punitive campaigns, not wars of conquest. However, even a minor victory in the forests of Germania could be used for imperial propaganda.

In 83 CE, Emperor Domitian led a military expedition into the Black Forest region. Little is known of his campaign, which seems to be a small-scale affair without any significant impact. However, we know that no additional territory was taken, and the Roman boundary remained on the west bank of the Rhine. Thus, Domitian’s campaign was not a traditional conquest. Yet, the emperor decided to commemorate the occasion. The Roman coin bears the legend GERMANIA CAPTA (Germania Captured). The choice of the text and imagery (the tropaeum flanked by the captives) echoes the coinage issued by Domitian’s father Vespasian and his brother Titus, to commemorate a much more significant and impactful victory in the Jewish War.

Instead of major wars of conquest, the third century saw Rome fighting for its very survival. The so-called Third Century Crisis was a turbulent period when Roman emperors and their armies fought against both external and internal enemies. Parts of the territory had been lost and then regained, most notably by Emperor Aurelian, who in a relatively short time unified the entire Roman Empire. While the conflicts notably weakened the legions, the fourth-century Empire could still make one final push in the West.

The silver Roman coin issued in 323 CE is probably the last coin celebrating actual conquest in the Western part of the Empire. The bronze coin bearing the legend SARMATIA DEVICTA (Sarmatia Conquered) celebrates the victory of Emperor Constantine the Great over the Sarmatians and the annexation of territory on the other side of the Danube. The image accompanying the text is a traditional motif chosen from the Roman triumphal iconography — the personification of Victory trampling a kneeling barbarian. Yet, while Constantine achieved a great victory, the newly taken territory was soon abandoned. The open steppe was too hard to defend against mounted warriors, and Rome’s limited manpower had to be employed elsewhere, including in costly civil wars.

Emperors would continue to celebrate their largely imagined victories on coinage until the fall of the Western Roman Empire, following the example set by Domitian. After all, the idea of the Roman Empire and its emperor being unable to defeat their enemies was simply unthinkable.