Andrew Wyeth’s Christina’s World provides ample ground for speculation. Who is Christina, and why is her world filled with mystery and nostalgia? 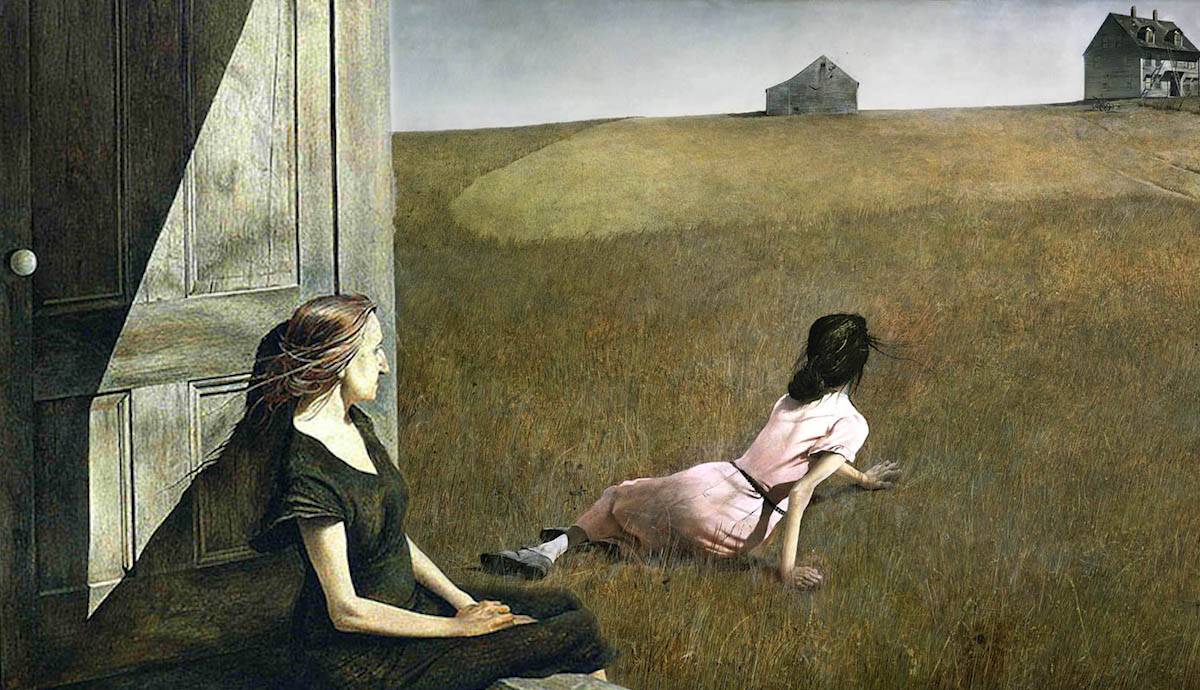 Andrew Wyeth is remembered as one of the most influential and talented artists of the North American art scene. His style is overflowing with emotional sincerity, realism, and undercurrents of abstraction and symbolism. However, thematically he tends to focus on individuals, daily life, and landscape. Wyeth’s work is remembered fondly, but none is more discussed than his famous 1948 masterpiece Christina’s World. This seminal work invites the viewer to a mysterious pastoral scene introduced by the curved figure of a young woman, and sets the tone for a heartfelt story about human endurance and strength.

A young woman lies crookedly on a field of dry grass. She stares behind her towards a large grey wooden farmhouse surrounded by a plain fence. Around the property stand other shabby structures while a dirty car track cuts through the dry yellow field. The scenery is captivating and powerful in its stillness and quietness. Thanks to Wyeth’s masterful hand, you can see each meticulously painted blade of grass; you can feel the slight breeze running through the field and smell the faint essence of grass.

Yet as domineering as the landscape is, the form of the faceless woman immediately captivates you and keeps you tethered with feelings of uncertainty. Something feels…off. It’s not her clothing; her long soft pink dress and grey shoes perfectly juxtapose the cool tones of her surroundings. It’s not necessarily that she’s lying on the ground, nor the absence of her face. Even though mystery encircles her absent facial features, and you’ve wondered once or twice what she might look like, there is something else that causes a distinct feeling of tension and uneasiness: her twisted arms and crooked figure.

Although many artworks stand on their own, separate from any contextual information regarding their creators or their time, many others are framed by the stories of their masters. Christina’s World is one such work that demands we look at its creator’s life and story to fully understand the painting’s composition and meaning.

Andrew Wyeth was born on the 12th of July, 1917, in Chadds Ford, Pennsylvania, into a family of artists. Wyeth’s father, Newell Convers Wyeth, better known as N.C. Wyeth, was a successful painter and illustrator, producing more than 3,000 paintings and illustrating 112 books in his lifetime. Naturally, under his father’s guidance, the young Andrew Wyeth began to illustrate from a very young age, and even produced illustrations under his father’s name by the time he was a teenager.

Although Andrew Wyeth happily helped his father, he did not have a passion for illustrating. He preferred painting. With the attentive assistance of his father and later the help of his brother-in-law Peter Hurd, Andrew Wyeth mastered painting with what would become his preferred mediums: watercolors and egg tempera. Slowly, Wyeth grew to be concerned only with depicting the simplicities of life, embracing the artistic tendencies of the regionalist style, while maintaining, as he claimed, a strong connection with abstraction, surprising those who regarded him as a realist painter.

Wyeth argued: “My people, my objects breathe in a different way: there’s another core—an excitement that’s definitely abstract. My God, when you really begin to peer into something, a simple object, and realize the profound meaning of that thing—if you have an emotion about it, there’s no end.”

By 1937, Andrew Wyeth was an established artist, selling out the entire inventory of his first solo exhibition at the Macbeth Gallery in New York City. Wyeth’s style had now fully evolved into regular depictions of formal pictorial beauty with undercurrents of emotional and symbolic content, along with underlying abstractions. Meanwhile, his palette was known for its limited, muted color range. While Wyeth was secure in his recognition as an established, talented artist, he was not yet considerably admired by the public or critics alike. This all would change after a fateful meeting with the resident of the Olson House in Cushing, Maine.

In 1939, Wyeth decided to take a trip to Maine for his 22nd birthday, where he planned to meet with an old artist friend. While visiting his friend’s house, he met 17-year-old Betsy James, who Wyeth would eventually come to marry just ten months later. After Betsy’s proposition, the pair decided to visit her old friends. There Wyeth would meet his future neighbors and close friends, Alvaro Olson and his sister, Anna Christina Olson.

Andrew Wyeth quickly became extremely close to the Olson siblings, spending most of his time and his talent on them. In fact, Wyeth grew to have full undisturbed access to the farm and painted nearly 300 drawings, watercolors, and tempera paintings at and of the Olson’s farm from 1937 to the 1960s.

However, Wyeth’s favorite subject was Christina Olson. Anna Christina Olson, born on May 3, 1893, suffered from Charcot-Marie Tooth (CMT) disease, which causes weakness in the feet and lower leg muscles. CMT disrupts the movement and coordination of the fingers, hands, wrists, and tongue. As such, Christina was immobilized from the waist down and often moved around her property by crawling, as depicted in Christina’s World.

Christina’s determination for life inspired Wyeth to create Christina’s World. Her passion for life and independence struck Wyeth with a desire to, as he stated, “do justice to her extraordinary conquest of a life which most people would consider hopeless. If in some small way I have been able in paint to make the viewer sense that her world may be limited physically but by no means spiritually, then I have achieved what I set out to do.”

Ultimately, Wyeth depicted Christina in a number of his works, and through his devotion, he produced what would become his most recognizable and successful work of art.

Interestingly, despite Christina Olson’s and Andrew Wyeth’s great personal and professional relationship, it was not her character and way of life that first drew the artist to their farmhouse, but the farmhouse itself. Wyeth had stated that it was an initial artistic fascination with the Olson House that he requested to stay on the farm. And stay on the farm he did. Over the next three decades, Wyeth had full access to the Olson House and even had a small work studio on the second floor from where, in the summer of 1948, he saw Christina crawling through her fields, giving way to the creation of Christina’s World.

Wyeth only ever drew two locations in the entirety of his 70-year career; his hometown of Chadds Ford, Pennsylvania, and both the Olson House and his summer home in Cushing, Maine. Regarding the Olson residence in Maine, Wyeth has stated that “I just couldn’t stay away from there. I did other pictures while I knew them but I’d always seem to gravitate back to the house. … It was Maine.(…) In the portraits of that house, the windows are eyes or pieces of the soul almost. To me, each window is a different part of Christina’s life.”

Andrew Wyeth remained very close friends with both Christina and Alvaro Olson, even moving to a house next to them with his wife, Betsy. Wyeth often expressed his love and respect for Christina: “her voice is immediate, without self-pity, and she follows what she has to say with a shrewd slow look from her brown eyes. She has a force of character that would make any condescension to her paralysis an insult.”

From Christina’s side, her admiration of the artist was explicit, as was her gratitude for being included and “transported,” as she claimed, to different locations through his paintings. The pair’s friendship was so great that Andrew requested to be buried next to the Olson siblings.

After the siblings’ deaths, Wyeth painted Alvaro and Christina as a way to immortalize their friendship and memory. The piece functions as a type of portrait. “I conceived this as a portrait of the whole Olson environment, and I painted it the summer after Christina and her brother, Alvaro, had both died. I went in there, and suddenly the contents of that room seemed to express those two people–the basket, the buckets, and the beautiful blue door with all the bizarre scratches on it that the dog had made. The Olsons were all gone but powerfully there nonetheless.”

Despite its rich contextual history, Christina’s World stands alone as a powerful piece dedicated to the human psyche and its relation to the surrounding landscape. More than anything, Wyeth’s seminal work is a psychological landscape: a masterful exploration and depiction of Christina’s own inner world, just like the title suggests. In the painting, as in life, Christina moves toward her ancestral property despite her difficulties, thus depicting her hard-working character. The viewer finds Christina facing a literal uphill battle, placed there by the artistic prowess of Andrew Wyeth. Through loving experience, Wyeth knew that she would overcome this difficulty like she had many times before.

Christina’s World is now registered as one of the foremost examples of 19th century American art. While the painting’s artistic and compositional beauty makes it stand out, it is its loving history of friendship and compassion that truly sets it apart.

Famous Artworks by Anonymous: Must Art be Connected to an Artist?

By Despoina TsoliBachelor of Arts w/ cultural analysis concentrationDespoina is a curator who graduated with a degree in Literary and Cultural Analysis from the University of Amsterdam. Anything regarding art, archeology, and mythology will spark her interest although she is known to also heavily enjoy an exhilarating book and good board game.

Famous Artworks by Anonymous: Must Art be Connected to an Artist?