The Art & Architecture of the Abbasid Caliphate

From mounting a revolution and slaughtering the previous dynasty to the Golden age of Islam and Islamic art, the Abbasid Caliphate was the last universal Islamic Empire. 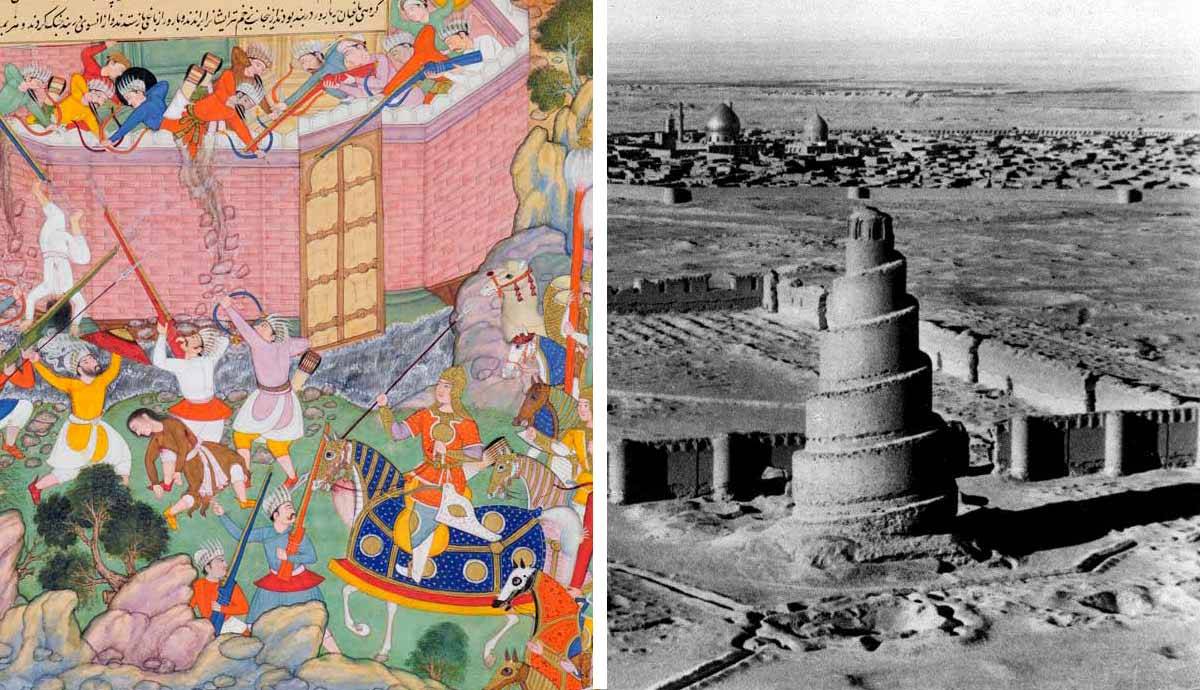 In the middle of the 8th century, the Abbasid Caliphate rose to power, reframing the structure of the Muslim realm. Baghdad and Samara became the new great centers of the Islamic world and art. From these two cities, new artistic styles and techniques spread throughout the Caliphate and beyond. Here’s a look at the Abbasid Caliphate through its most innovative cities, its architecture, and the artistic tehcniques that were developed during the Golden Age of Islam.

The Rise & Fall of the Abbasid Caliphate

In 750, the state ruled by the Umayyad Caliphate witnessed a revolution that spread from eastern Iran and almost wiped out the ruling dynasty. The leader of the revolution, Abu al-Abbas as-Saffah, destroyed the Umayyad troops in a massive battle near the Great Zab. Soon, a new Abbasid Caliphate was established east of Damascus in the city of Raqqa and then moved to Baghdad in 762 by caliph al-Mansur. The Abbasid Caliphate was the second major Islamic dynasty and one of the longest in power. Its rulers claimed to be descendants of Muhammad’s uncle, Abbas ibn Anbul-Muttalib, and thus more closely blood-related to the Prophet than the Umayyad dynasty.

During the final centuries of their rule, the Abbasid caliphs were rulers in name only, having become the puppets of other princely states, such as the Buyids, the Samanids, and the Seljuqs. Caliphs retained only moral and spiritual influence as the heads of Orthodox Sunni Islam. The Abbasid Caliphate witnessed a brief revival under caliphs al-Nasir (r. 1180–1225) and al-Mustansir (r. 1226–42) when Baghdad once more became a center of the arts. The sack of Baghdad by Mongols in 1258 made the surviving Abbasids flee to Mamluk-led Egypt, but these caliphs had minimal influence. Thus ended the third Caliphate since Muhammad’s death and the last universal Arab-Muslim empire.

The Golden Age of Islam

The first two centuries of the Abbasid Caliphate are considered the Golden Age of Islam, with its center in Baghdad, where construction, art, and scholarship thrived. Abbasid Baghdad attracted many people, including the most important scholars. During the reigns of Abbasid Caliphs Harun al-Rashid and al-Ma’mun, a space dedicated to scholarship, the Baghdad House of Wisdom was established. Al-Mamun made special efforts to recruit famous scholars to the House, regardless of their religious background. Here, Arab and Persian scholars collected the information they took from translated works of Ancient Greeks, enabling some scientific contributions of the Abbasid Caliphate.

Scholars living in Baghdad during the Abbasid Caliphate contributed to preserving Greek and other existing knowledge about philosophy, astronomy, medicine, and many other disciplines. Ibn al-Haythm invented the first camera and was able to form an explanation of how the eye sees. Doctor and philosopher Avicenna wrote the Canon of Medicine, which helped physicians diagnose dangerous diseases such as cancer.

A new method of carving surfaces included the repetition of abstract geometric or vegetal forms, later known as arabesque, and was widely used as wall decoration and in metalwork and pottery. Another technique of luster painting over a white glaze was especially admired in Samarra for its glittering effect. This technique, along with many other elements of Islamic art, went on to be used all the way in Spain and even contributed to the development of ceramic decoration in Europe.

Baghdad: The City of Peace

According to historical accounts, Caliph al-Mansur built Baghdad as a round city with four gates and a palace and mosque at the center. The center of Baghdad was left largely open around the palace and congregational mosque, while the houses, workshops, and markets were arranged in a ring inside the walls. Unfortunately, nothing remains of al-Mansur’s city, with the possible exception of a mihrab (prayer niche) today in the Iraq museum.

Some buildings that survive from the late period of the Abbasid Caliphate (12th and the 13th century) are the Zummurud Khatun Tomb, the Mustansiriya Madrassa, the building known as the Abbasid Palace, and two minarets. The Zummurud Khatun Tomb, built in 1209, consists of a conical muqarnas dome built on an octagonal base. The Mustansiriya Madrassa was constructed between 1227 and 1233 and is Baghdad’s most famous surviving building. It was built by the caliph al-Mustansir and contained four Sunni law schools (i.e., Shafi, Hanafi, Maliki, and Hanbali). The madrassa is a rectangular courtyard building with four large iwans, one for each law school.

The building now known as the Abbasid Palace was probably originally the madrassa of al-Sharabiyya, built by Sharif al-Din Iqbal in 1230. The brickwork decoration of the building is identical to that of the Zummurud Khatun Tomb. Seljuks later rebuilt Zummurud Khatun Tomb into a mosque, whose minaret is considered the oldest surviving minaret in Baghdad.

Considering almost nothing remains of 9th century Baghdad, the city of Samara is still the most important place for understanding Abbasid art. After fervent clashes between a local population and the caliph’s soldiers, Caliph al-Mu’tassim established a new capital in Samarra on the banks of the Tigris River in 836. The city remained the capital of the Abbasid Caliphate until 892, when the capital was moved back to Baghdad. In Samarra, Islamic art and architecture developed their own characteristics. Extensive palaces and mosques stretched over 40 kilometers along the Tigris.

Jausaq al-Khaqani was the caliph’s palace most of the time and was always his official residence. It was built by one of al-Mutasim’s Turkish generals and reflects features of Central Asian influence, such as wall paintings with Bactrian camels. The palace is a vast complex, including a mosque, a polo ground, and a horseracing track. On the west side of the palace, facing the river, there is a monumental gateway or portal known as the Bab al-Amma, or public gate. This structure was probably an official entrance and a place for public audiences. Directly to the east of the palace is one of the largest mosques in the world, the Great Mosque of Samarra, with its spiral minaret (the Malwiyya).

In the north of Samarra are the remains of an extension to the city built by Caliph al-Mutawakkil in an attempt to found a new city. This new area had a palace, garrisons, and a congregational mosque known as the Abu Dulaf. The Abu Dulaf Mosque is a smaller version of the Great Mosque.

Many early Abbasid structures and art recall the Sassanian culture, as they used the same techniques, materials, and similar designs. The desert palace of Ukhaidir near the city of Karbala is one of these early examples of Abbasid art and fortification. It carries the name of Isma’il ibn Yusuf al-Ukhaidhir, who carried out a rebellion against the Abbasid Caliphate. It was constructed under the caliph As-Saffah by his nephew Isa ibn Musa and is one of the finest examples of Abbasid architecture in Iraq. Its monumental architecture still recalls the despotic nature of the Abbasids.

The palace may be divided into two structural phases, a central palace core and an outer enclosure wall added slightly later. The central core of the palace contains a mosque, a bathhouse, and the main reception hall. The architects of al-Ukhaidhir Palace introduced a new technique based on the construction of elliptical or pointed barrel vaults.

Art of Dynasties Under the Abbasid Caliphate

Inside the territories of the Abbasid Caliphate, various factions and provinces struggled toward autonomy, weakening the dynasty’s rule. Tahirids, Samanids, Saffarids, and Tulunids, in one way or another, still maintained nominal loyalty to the Abbasid caliphs but functioned autonomously. Ahmad Tulun, a junior member of the Turkic military of Samarra, was sent to Egypt in 868. Soon after he arrived, Ibn Tulun undertook various steps that seemed to outline his desire for autonomy and promote his popularity. He also emulated the Samarra model with his founding of a garrison city for his troops, al-Qataʾiʿ, where he copied Samarra down to its architectural forms and decorative and aesthetic styles. The Mosque of Ibn Tulun, which still stands in Cairo today, includes a minor spiral design for its minaret that recalls, to some extent, the minaret of the Great Mosque of Samarra.

The mosque was begun in 876 and completed in 879. Due to its good state of preservation, the Ibn Tulun Mosque (one of the oldest in Egypt) provides an excellent example of ninth-century architectural decoration and techniques. The most notable feature of the outer walls is the decorative openwork crenellations which resemble paper cut-outs. The courtyard facades consist of slightly pointed arches resting on rectangular piers with engaged colonettes, which is an unusual arrangement for Cairo, where marble columns were usually used.

The Dissolution of the Abbasid Caliphate

Considering the artistic legacy of the Abbasid Caliphate in Islamic art went on further.  Many visual aspects and technological innovations of the Abbasid period, from ceramics to Kufic calligraphy to the patronage of classical scientific literature, remained important components of Islamic art and culture. The multicultural, intellectual environment the early Abbasid caliphs provided enabled the transmission of artistic tastes and styles of Baghdad to the west and east of the Caliphate, as other cultural city centers were established and flourished.