The art of the Rashidun Caliphate represents the earliest visual culture of Islam, made during the reign of the four successors of the prophet Muhammad. 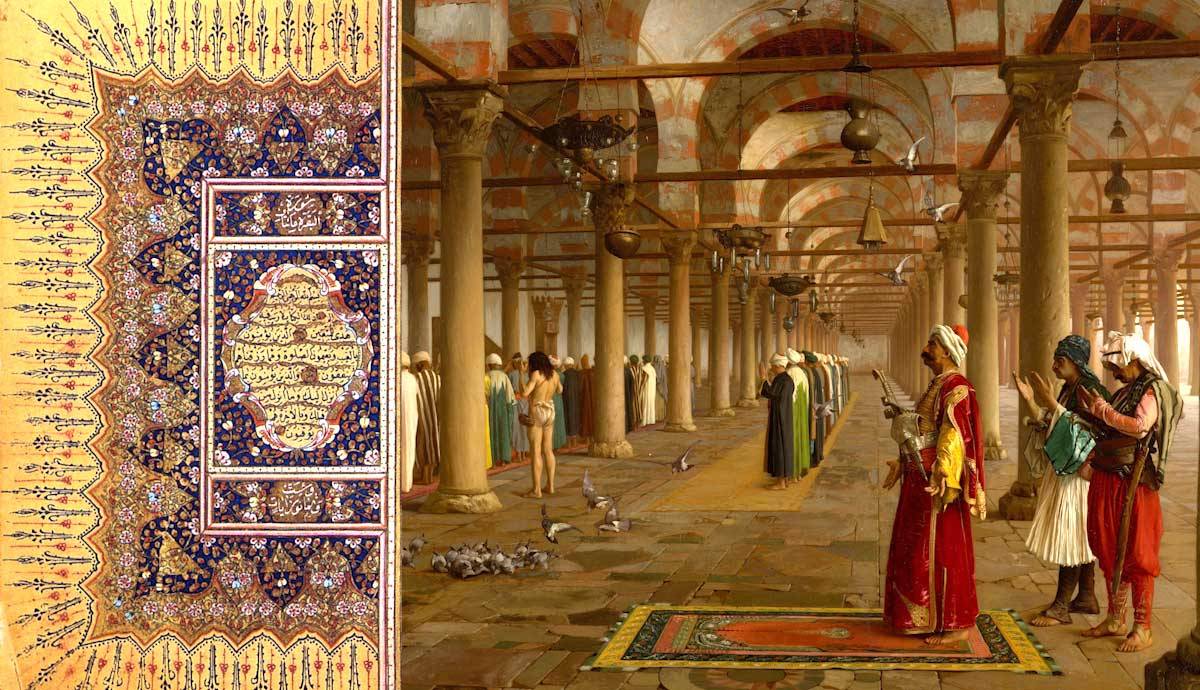 The Dome of the Rock and the Great Mosque of Damascus, masterpieces of early Islamic art, were founded on the ideas established by the earliest adherents of Islam. Examples of art in the Rashidun Caliphate are few and far between, but they are still significant examples of early Islamic art and architecture. For three decades, the rulers of the Rashidun Caliphate concerned themselves primarily with establishing a new state and maintaining religious unity on the Arabian Peninsula. Even out of the examples we know, most were renewed in a way that barely anything survives from their original form. Before the 7th century, the nomadic people of the Arabian Peninsula didn’t produce art of monumental dimensions. On the other side, the newly conquered territories offered centuries-old artistic traditions ready to be incorporated into a new culture.

The Rise of Islam

Before the prophet Muhammad migrated to Medina in 622 (the first year of the Islamic calendar), the Arabian Peninsula already had a strong polytheistic religious tradition centered in the city of Mecca. Muhammad was born in the second half of the 6th century in the tribe of Quraysh, but little is known about his life before his first divine revelations in 610. In one of his spiritual retreats, recalling the practice of Christian hermits, Muhammad had a vision of the archangel Gabriel, who presented him with an apostolic mission of Allah.

Firstly, Muhammad passed the first divine messages only to Khadijah (Muhammad’s first wife and follower) and his intimate friends, including two future rulers of the Rashidun caliphate. In a vision he had in 612, it was commanded to him to make his revelations public. These revelations were subsequently collected and codified in the Islamic holy book, the Qur’an. The opposition in Mecca came from the Quraysh oligarchy, to whom accepting Islam was equal to losing all of their privileges, losing political supremacy, and condemning their polytheistic ancestors to Hell.

Thus, Muhammad was forced to emigrate north to the city of Medina in 622, the year of the hijra. Continuing to attract followers in Medina, within a few years, Mecca largely embraced Islam and Muhammad made a pilgrimage to the city. After his final pilgrimage to Mecca in 632, the prophet Muhammad passed away.

The four caliphs that immediately succeeded Muhammad were called the “Rightly Guided,” translated into Arabic as Rashidun. The Rashidun Caliphate was ruled by Abu Bakr (632-634), ‘Umar (634-644), ‘Uthman (644-656), and ‘Ali (656-661). Their rule lasted for 29 years and defined Islam’s future political and religious development.

They expanded the Islamic state to the territories of Iraq, Syria, Palestine, Egypt, Iran, and Armenia. Rashidun was also responsible for the adoption of an Islamic calendar. After Muhammad’s death, they assumed all of his duties except the prophetic. They were imams, leading the congregation in prayer at the mosque; as khatibs, they delivered the Friday sermons; and as umara al-mu minin, they commanded the army.

After ‘Ali’s death, there was a dispute over the throne, which was ended by the abdication of Ali’s son Hasan in favor of Mu’awiya, the founder of the first dynasty of the caliphs, the Umayyads. The dispute over ‘Ali’s throne led Islam into a division that remains to this day. The majority of the believers, the Sunnis, are under the guidance of the reigning caliph, and the minority, the Shi’ites, are faithful to the lineage of the first “true” caliph, ‘Ali (not recognizing any successors outside the family of the Prophet and his descendants).

Since the term Islamic art arises from the practice of Islam, we must note the religious ideas and beliefs that define such a rich artistic tradition. Unlike Christian art, Islamic art has almost no scriptural foundation. It is derived neither from Qur’an nor from the Hadith. Though the Qur’an doesn’t explicitly forbid it, images are limited in order to avoid idolatry. Arabian people considered themselves descendants of the Old Testament patriarch Abraham’s illegitimate wife and son, Hagar and Ishmael.

Islam came from a long tradition of other Abrahamic religions, especially influenced by Judaism. Probably inspired by one of the Ten Commandments of the Old Testament, “Thou shalt not make unto thee any graven image,” there was an adoption of the ban on idolatry. The strict prohibition on worshiping idols explains the avoidance of figural representation even in early Islamic Art. In all its other elements, Islamic art became very diverse as it extended to other regions of the world. Consequently, it attained different styles based on the time and region it was created. For example, Spain, North Africa, Persia, Turkey, and India all developed distinct styles of Islamic art.

During the Rashidun Caliphate, believers needed mosques for prayer, but since it had been only a decade since Muhammad migrated to Medina, Islamic conquerors had no architectural tradition yet. In Syria, they used parts of Christian churches, and in Persia, the Sassanian palaces provided Islam’s followers with a place of prayer. Eventually, the first mosques were built and were modeled after Muhammad’s house in Medina.

The original house was a simple structure made of raw brick and used by Muhammad and his family. The courtyard was the place where people gathered to hear him. The prophet’s house had been used as a place of prayer after his death. It had a courtyard surrounded by walls, with rooms on one side for the wives of Muhammad and a shaded area on the other. This shaded area was built on supporting columns made of palm trunks and a roof covered with palm fronds. The wall of this shaded area, the qiblah, faced Mecca since the prophet decreed in 624 that prayer be directed towards the city.

One of the four caliphs rebuilt its structure and considerably expanded its size. That building went on to become the model for other mosques and architecture of the Umayyad and Abbasid dynasties. In 706, Caliph al-Walid I destroyed the original brick buildings and created a new mosque on the site. Today, the house is part of the Prophet’s Mosque, or Al-Masjid an-Nabawi, and is one of Islam’s most important pilgrimage sites.

During the Rashidun caliphate, calligraphy, unlike other key components of Islamic art, had already been proclaimed important. Arabic written language was a regional language concentrated in the Arabian Peninsula. After the founding of Islam, it became its universal and sacred language because it was the language of the Qur’an. That’s when Arabic calligraphy earned a special status. Rejection of figural representation, be it in painting or sculpture, elevated writing as the main carrier for signs of belief, power, and legitimacy. Thus, Islamic calligraphy went from the pages of the Qur’an to stone, tiles, plaster, metal, wood, and fabric.

There are almost no manuscripts from the Rashidun period as proof of this standard Islamic religious and artistic practice. Today, the oldest surviving manuscript of the Qur’an is dated somewhere between 632 and 645 and is kept at the University of Birmingham. The Birmingham Qur’an Manuscript is written in an Arabic script known as Hijazi and contains only parts of surahs 18-20 (chapters in the Qur’an).

The lands newly conquered by the Muslims had their own preexisting artistic traditions, and those artists who worked under Byzantine or Sassanian patronage continued to operate under new patrons. Therefore, the first examples of Islamic art of the Rashidun Caliphate reflect the blending of classical and Iranian decorative themes and motifs.

In 642, at Nahavand, Rashidun defeated Yazdegerd III and finally conquered the Sassanid Empire of Persia. Islamic coins minted in the time of the Rashidun imitate those of the Sassanid Empire. For decades, new governors ruling a population that was still largely Zoroastrian were content to let local mints continue to issue silver coins with the portraits and inscriptions of Sassanian ruler Khusrau II. The front of the coin represents a Sassanian-style bust imitating Khusrau II with the Arabic word bismillah, meaning “in the name of Allah,” on the margin. On the reverse is the fire altar with ribbons and attendants, along with a star and crescent flanking flames. Several other coinages were often included in this category named Arab-Sassanian, all with designs from Sassanian coinage but with added Arab inscriptions.

The Rashidun Caliphate in Islamic Art

Far more important than the art of the Rashidun Caliphate is the influence and legacy of its rulers on Islamic art throughout history.

After the death of the first two caliphs, Abu Bakr and ‘Umar were buried next to the Prophet Muhammad in the chamber of the Prophet’s house that used to be Aisha’s (Muhammad’s favorite wife) chamber. Today their tombs are covered by a Green Dome in the Prophets Mosque in Medina. The structure dates back to 1279, when an unpainted wooden dome was built over the tombs. Placed next to the Prophet, their graves are one of Muslims’ most important pilgrimage sites.

Further, in 1847, a renovation of the Hagia Sophia in Istanbul began under Sultan Albdulmejid I. The Swiss-Italian Fossati brothers carried out the work, and calligrapher Kazasker Mustafa Izzet Effendi designed eight gigantic medallions to be hung in the mosque. Mustafa painted four of the medallions with the names of Rashidun caliphs, still hanging from the cornice of the Great Mosque of the Hagia Sophia today.