The symbol of the power of the Byzantine Empire and a great feat of human engineering, Hagia Sophia remains one of the most important structures ever built. 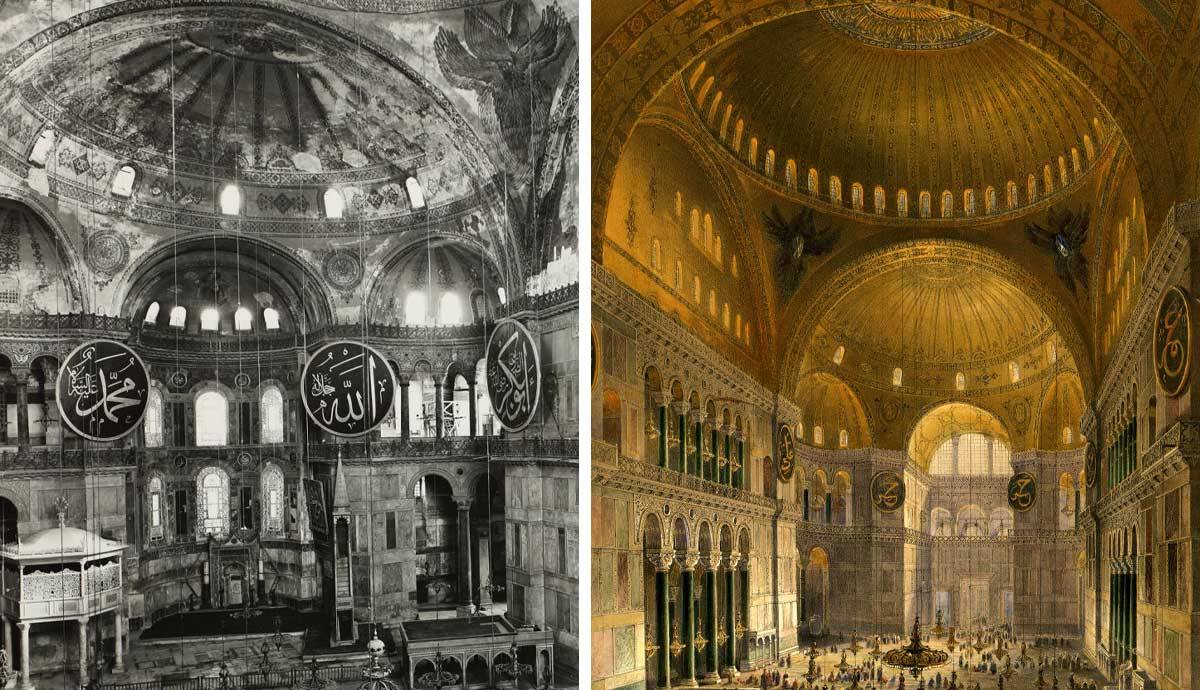 Dedicated to Holy Wisdom, the Great Church of Hagia Sophia is a profound example of human engineering, architecture, history, art, and politics united under one roof. It was built in the 6th century Constantinople, nowadays Istanbul, during the reign of Emperor Justinian I. Hagia Sophia was the most important ecclesiastical building of the Byzantine Empire. Its dome of monumental dimensions, golden mosaics, and marble pavement is just a small part of the greatness of Byzantine art and architecture. Throughout history, it was the largest church of Orthodox Christianity, a Roman Catholic cathedral, mosque, and museum. Though it was converted back into a mosque, this building remains one of the most important places for Orthodox Christians, influencing the construction of similar churches across the world.

The history of Hagia Sophia began long before Justinian. After moving the capital of the Roman Empire to the city of Byzantium and renaming it Constantinople, Constantine the Great had enlarged the existing city by three times its original size. As a large population was being moved to the city, it was in need of more space for new believers. This included building a large cathedral close to the Imperial palace, finished under Constantius II in 360.

Information about what this church looked like or its significance is scarce. It is mentioned as the Great Church, implying the monumental dimensions and importance it held. It was probably a U-shaped basilica, typical for 4th-century churches in Rome and Holy Land. This church was destroyed in the riots after patriarch John Chrysostom was exiled from the city in 404. Almost immediately, the construction of the new church began as ordered by emperor Theodosius II. The name Hagia Sophia came into use around 430. This new church was probably a basilica with five naves, galleries, and an atrium on the west side. Theodosian Hagia Sophia was burned to the ground in 532 during the Nika Revolt against Emperor Justinian I.

After suppressing the revolt, Justinian decided to rebuild the Great Church. In preparation, marbles were brought from all over the Aegean lands, thousands of workers gathered, and logistics and monitoring of the building were handed to Anthemios of Tralles and Isidorus of Miletus. After just five years, the new Hagia Sophia was consecrated. Tradition has passed down Justinian’s words after this event: “Solomon, I have surpassed thee!”

Unlike the previous versions of the church, Justinian’s Hagia Sophia plan is a mixture between a basilica and a centrally-planned building. An important part of the church was the galleries, which the imperial family used during religious rituals.

The interior of Hagia Sophia was paneled with marble of various colors, and columns taken from ancient buildings were reused to support the arcades. The upper part was decorated in gold with a massive cross in a medallion at the dome’s summit. This dome, 31 meters in diameter, is a culmination of a complex system of vaults and semi-domes. The original dome collapsed in 558 after an earthquake and was replaced in 563. Procopius, Justinian’s court historian, described it as a “golden dome suspended from Heaven.”

Justinian’s building went on to reflect theological controversies, imperial donations, and even remarriages illustrating the complexity of the monument’s life within a society.

The two waves of iconoclasm that hit the Byzantine Empire between 730 and 843 wiped out most of the earlier religious images of Hagia Sophia. The reestablishment of the veneration of icons gave an opportunity for a new decoration program based on a new theology of images. New mosaics were placed in the church during the reign of Basil I and Leo VI.

The first image introduced was the Virgin and Child in the apse around 867. Next were the figures of Church fathers and prophets in the north and south tympana. Unfortunately, only a few figures and fragments remain to this day. Probably soon after the death of Leo VI, a mosaic of the emperor kneeling before Christ enthroned was placed above the Imperial door, the main entrance into the church. At one of the southwest entrances is the mosaic with the Virgin Mary holding the Christ Child and flanked by emperors Constantine and Justinian; this mosaic highlights the Byzantine belief in the Virgin as the protector of the city.

In the waning years of the Macedonian dynasty, a new mosaic was added to the southern gallery. Initially, it depicted Empress Zoe and her first husband, Romanos III. The image of Romanos was replaced between 1042 and 1055 with a portrait of Zoe’s third husband, emperor Constantine IX Monomachos. Both versions commemorate two different imperial donations to the church.

Another interesting detail from this period is the Nordic rune inscription found in the galleries. The only readable part of the runic inscription is the name “Halvdan.”

The Komnenos Dynasty & the Sack of Constantinople

By the end of the 11th century, the Komnenos dynasty rose to power, ending the period of decline and strife. Justinian’s Great Church remained an ongoing work in progress, and the new rulers continued to decorate it. Emperor John II Komnenos, together with his wife Irene and son Alexios, funded the church’s restoration, as proven by their portraits in the south gallery. These portraits show the relationship Hagia Sophia had with the cult of the Emperor. The south gallery of the church was meant for the imperial family and court during the liturgy. Since only the highest imperial officials were allowed access to the galleries, these portraits were meant to remind them of the legitimacy and piety of the Komnenos dynasty.

After the Crusaders took over Constantinople in 1204, Hagia Sophia was converted into a Catholic cathedral, a function it held until the reclamation of the city in 1261. Following Byzantine practices, Baldwin I of Constantinople was crowned as the first Latin Emperor in the Hagia Sophia. The leader of the Sack of Constantinople, Doge of Venice Enrico Dandolo, was buried inside the church, but his tomb was later destroyed when the church was converted into a mosque.

The Palaeologus Dynasty & the Fall of Constantinople

In 1261, the capital was reclaimed, Michael VIII Palaeologus was crowned emperor, Hagia Sophia was converted back to an Orthodox church, and a new patriarch was enthroned. Many churches fell into disrepair during the so-called Latin rule, so the Byzantines began a great restoration campaign. Probably on the order of Michael VIII, a monumental new mosaic was installed in the south gallery. Deesis scene consists of Christ in the center flanked by Virgin Mary and John the Baptist.

Hagia Sophia reclaimed its importance as a place where legitimate emperors were crowned. This importance is proven by the double-crowning of John Kantakouzenos. In 1346, John Kantakouzenos proclaimed himself emperor and was crowned by the Patriarch of Jerusalem. Despite already being an emperor, John needed to be crowned in Hagia Sophia in order to be considered a legitimate emperor. After winning the civil war with John V, a legitimate heir to the Palaeologus dynasty, Kantakouzenos was crowned in Hagia Sophia by the Ecumenical patriarch in 1347 and became emperor John VI.

The Great Church followed the fate of the Empire, and its condition was declining in the last century before the fall of Constantinople.

In the last days of the Empire, those who couldn’t fight the Ottoman invaders found refuge in Hagia Sophia, praying and hoping for protection and salvation.

After Mehmet II’s conquest of the city in 1453, Hagia Sophia was converted to a mosque, a status it held until the fall of the Ottoman Empire in the early twentieth century. During this period, minarets were built around the perimeter of the building complex, Christian mosaics were covered with whitewash, and exterior buttresses were added for structural support. Hagia Sophia became the personal property of the Ottoman sultan and had a special position among the mosques of Constantinople. No changes could be made without the Sultan’s approval, and even Islamic zealots could not destroy the mosaics since they belonged to the Sultan.

Around 1710, Sultan Ahmet III allowed a European engineer named Cornelius Loos, attached to the King of Sweden, Charles XII, who was the guest of the Sultan, into the mosque to make detailed drawings of it.

In the 19th-century, Sultan Abdulmejid I ordered an extensive restoration of the Hagia Sophia between 1847 and 1849. The supervision of this enormous task was handed over to two Swiss-Italian architect brothers, Gaspard and Giuseppe Fossati. At this time, eight new gigantic medallions designed by the calligrapher Kazasker Mustafa Izzet Efendi were hung in the building. They carried the names of Allah, Muhammad, the Rashidun, and the two grandsons of Muhammad: Hasan and Husayn.

In 1935, the Turkish government secularized the building, converting it into a museum, and the original mosaics were restored. Great effort has been put into the research and restoration of this great monument. In June 1931, Mustafa Kemal Atatürk, the first president of the Republic of Turkey, permitted The Byzantine Institute of America, established by Thomas Whittemore, to uncover and restore the original mosaics in Hagia Sophia. The Institute’s works were continued into the 1960s by Dumbarton Oaks. The restoration of Byzantine mosaics has proven to be a particular challenge since it meant the removal of historic Islamic art. In 1985, the building was recognized by UNESCO as a unique architectural masterpiece of the Byzantine and Ottoman cultures.

Hagia Sophia held the status of a museum until 2020 when the Turkish government reconverted it back into a mosque. This caused outrage and concerns around the world about what this change might bring to the building of universal significance. Today, it is used by Muslims for prayer and other religious practices. Fortunately, all visitors, Muslim and non-Muslim, are still allowed to enter the mosque, provided they follow certain rules.

Justinian the Empire Restorer: The Byzantine Emperor’s Life in 9 Facts