The Battles of Isandlwana and Rorke’s Drift

This is the story of the Battles of Isandlwana and Rorke’s Drift–the most famous and romanticized actions of the Anglo-Zulu War. 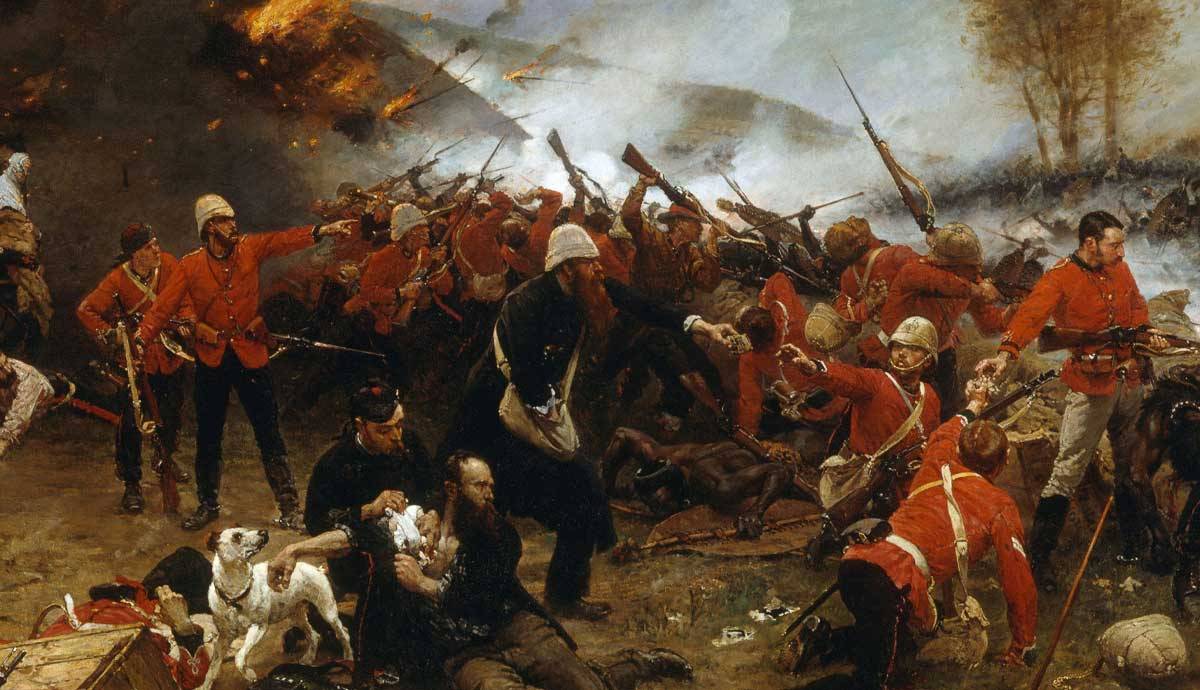 On January 12, 1879, the British Empire invaded the relatively small Zulu Kingdom in Southern Africa and kicked off the Anglo-Zulu War. The British were equipped and well-armed, ready for a quick war against an iron-age people armed with spears, clubs, and leather shields. A mere ten days later, the invasion was in shambles. Britain had suffered its biggest defeat ever against natives, and over 1,300 British soldiers lay dead, their bodies baking in the hot African sun.

A few hours later, the victorious Zulus marched on the tiny garrison at a mission station, and this was where the British redeemed their honor. These two actions were the battles of Isandlwana and Rorke’s Drift.

The Slaughter at Isandlwana

By January 20, the main British thrust into Zululand had crossed the Buffalo River and were well into Zulu territory. Lord Chelmsford, commanding the entire army, decided to pitch camp at the base of a large hill called Isandlwana. Despite British military doctrine, Chelmsford did not take the time to order defenses to be erected. The British had little regard for the abilities of the Zulu warriors and were dangerously overconfident in their own military might.

Once the British camp had been set up, Chelmsford sent out two battalions of the Natal Native Contingent, to scout the surrounding area and locate the Zulu army. There were a few skirmishes with Zulu warriors which Chelmsford believed to be the vanguard of the Zulu army. He decided to split the army, taking the bulk of it under his command, and left camp in order to find the main Zulu army and lure it into battle. It didn’t occur to him that the Zulus that the Natal Native Contingent had encountered were a diversionary force.

Left to guard the camp at Isandlwana were 600 Redcoat infantry, 700 men of the Natal Native Contingent, and about 70 men of the Royal Artillery, along with their two artillery pieces. In total, Chelmsford had left approximately 1300 soldiers of varying quality to guard the camp. Lieutenant-Colonel Henry Burmester Pulleine was left in charge of the forces there.

From 7:00 am, reports began to trickle in that groups of Zulus had been spotted around the camp, but the British were unsure as to whether they had intended to attack. At 10:30 am, a force of 500 men of the Natal Native Contingent and a rocket battery under the command of Colonel Anthony Durnford arrived from Rorke’s Drift to reinforce Isandlwana, bringing the defender’s total to just over 1,800 men. Meanwhile, Chelmsford’s force had been completely outmaneuvered by the main Zulu army which was now prepared to attack Isandlwana. The main Zulu army was discovered by British scouts at about 11:00 am. Almost 20,000 Zulu warriors were sitting in a valley in total silence. Upon being discovered, the Zulu army leaped into action and began the attack.

From Pullein’s vantage point, he could see the Zulu center and right flank appearing, in the traditional “bull horns” formation that the Zulus used to overrun and outflank their enemies. Pullein ordered the redcoat companies forward and spread out in line, while Durnford’s men retreated to a dry water bed. The native troops only had about one rifle for every ten men, and they were old muzzle-loaders. Realizing the seriousness of their predicament, many of them fled the field, and Durnford’s rocket battery was overrun.

The disciplined British soldiers held their line for hours, pouring rifle fire from their powerful Martini-Henrys into the Zulu ranks, causing the Zulu attack to stall. Durnford’s men, however, began to break and flee, exposing the British right flank. With the right flank exposed, the British fell back to the camp in a well-disciplined fighting retreat, but the numbers were against them. As an eclipse darkened the field of battle, the British found themselves in a series of isolated pockets, desperately fighting back-to-back, out of ammunition, bayonet against spear.

The British and the remaining native troops fought to the last. By mid-afternoon, the Battle of Isandlwana was over. Over 1,300 British and native troops lay dead, including their commanders Pullein and Durnford.

The Battle of Rorke’s Drift

Around noon on January 22, two survivors arrived at Rorke’s Drift bearing the news of what had happened at Isandlwana. Upon hearing the news, the commanders at Rorke’s Drift, Lt. John Chard and Lt. Gonville Bromhead, along with Acting Assistant Commissary James Dalton, held a meeting to decide what course of action to take. It was decided that if they tried to escape, their column would be caught out in the open. Their best chance at surviving meant staying and defending the mission station at Rorke’s Drift.

The garrison immediately set about fortifying the position, erecting walls of mealie (corn) bags, incorporating the three main buildings that made up the station. Loopholes were cut out of the walls, and doors were barricaded with furniture. During the preparations, 100 members of the Natal Native Horse that had retreated from Isandlwana, arrived and helped prepare the defenses.

At 4:00 pm, the Zulus had arrived, about 4,000 in total, commanded by Prince Dabulamanzi kaMpande, the half-brother of King Cetshwayo. At 4:20 pm, the battle began. The Natal Native Horse briefly rode out and engaged the vanguard of the Zulu attack, but running low on ammunition and tired from their retreat from Isandlwana, they decided to leave Rorke’s Drift. Upon seeing this, the other native troops stationed at Rorke’s Drift decided to flee. This left 140 British army regulars, 11 colonial troops, and four civilians left to defend the station against the Zulu onslaught. With 39 of these defenders in the hospital as patients, the situation turned into a dire nightmare.

Around 600 Zulus approached the south wall. The British opened fire but failed to keep the Zulus from advancing. The Zulus rounded the station and positioned themselves at the north wall as well, while those with old muskets and rifles taken from Isandlwana the day before started shooting at the British defenders. Another Zulu force attacked the northwestern wall by the hospital. Now almost completely surrounded, fierce hand-to-hand combat ensued as the Zulus attempted to dislodge the British from their defensive positions. The height of the defenses made it difficult for the Zulus, however. They crouched and waited for opportunities to grab the rifles as they poked over the defenses. They also stabbed through openings and used each other to vault over the mealie bags.

The British defending the north wall were continually harassed by Zulu gunfire, and five of the British deaths occurred there. By 6:00 pm, Chard realized the north wall could not be held, and he ordered his men to pull back to a second defensive position of biscuit boxes that had been set up. The hospital was now exposed and in danger of being overrun. The building was set on fire, and Zulus broke through the walls. Fierce fighting ensued from room to room as the British evacuated the building, breaking through the walls of each room and fighting off the Zulus trying to slay them. After the battle, five men would receive Victoria Crosses for their deeds in the evacuation of the hospital.

Outside the hospital, the fighting continued with intense ferocity as the British were pushed back to smaller and smaller defensive positions within the station. As night fell, the burning hospital illuminated the station. By about midnight, the exhausted Zulus calmed the ferocity of their attacks, and piecemeal assaults were made until 4:00 am which were easily resisted. When the Zulus finally withdrew, the British were reduced to holding only the area around the storehouse.

As dawn broke, the assault was finally over. A large force of Zulus appeared on the hill overlooking the station, but they turned and left Rorke’s Drift. They had spotted Chelmsford’s relief column approaching.

After the battle, 351 Zulus had been confirmed killed, and it is speculated that 500 more who were wounded were massacred. After the defeat at Isandlwana, Chelmsford’s relief column had no interest in treating the wounded Zulus nor taking any prisoners. On the British side, 17 men lost their lives and 15 were wounded. Eleven Victoria Crosses were awarded. This is the highest number of Victoria Crosses to be awarded to a single regiment for a single action.

The Aftermath of the Battles of Isandlwana & Rorke’s Drift

While the Battle of Isandlwana was a complete disaster that forced the British to regroup and organize a second invasion, the action at Rorke’s Drift was extremely useful in offsetting the disastrous invasion in the minds of the British public. The Battle of Isandlwana also served to lead the British to respect their adversary as a highly capable opponent. After Isandlwana, new tactics would be adopted to ensure the greatest effectiveness of the British soldiers against Zulu impis and tactics. Despite his ultimate victory over the Zulus, Lord Chelmsford had ordered the invasion without consent from the British government, and he would be remembered as the man responsible for Britain’s most devastating defeat at the hands of natives. He would never receive command again.

While the Battle of Isandlwana is a source of pride in Zulu culture, the same is true about Rorke’s Drift and its effect on British culture. Both battles have inspired countless re-enactments, and both battles have been the subject of blockbuster films, with the Battle of Isandlwana being portrayed in the movie Zulu Dawn (1979), starring Burt Lancaster and Peter O’Toole. The Battle of Rorke’s Drift is represented in the film Zulu (1964), starring Stanley Baker and Michael Caine.

Both sites are dotted with memorials such as bronze monuments, graves, and cairns, and each site has its own museum dedicated to the conflict.

Animals in War: 7 Examples of Animals Fighting in Human Conflict