When the British Empire went to war with the Zulus, the result was a conflict bloodier than the British expected. This is the Anglo-Zulu War. 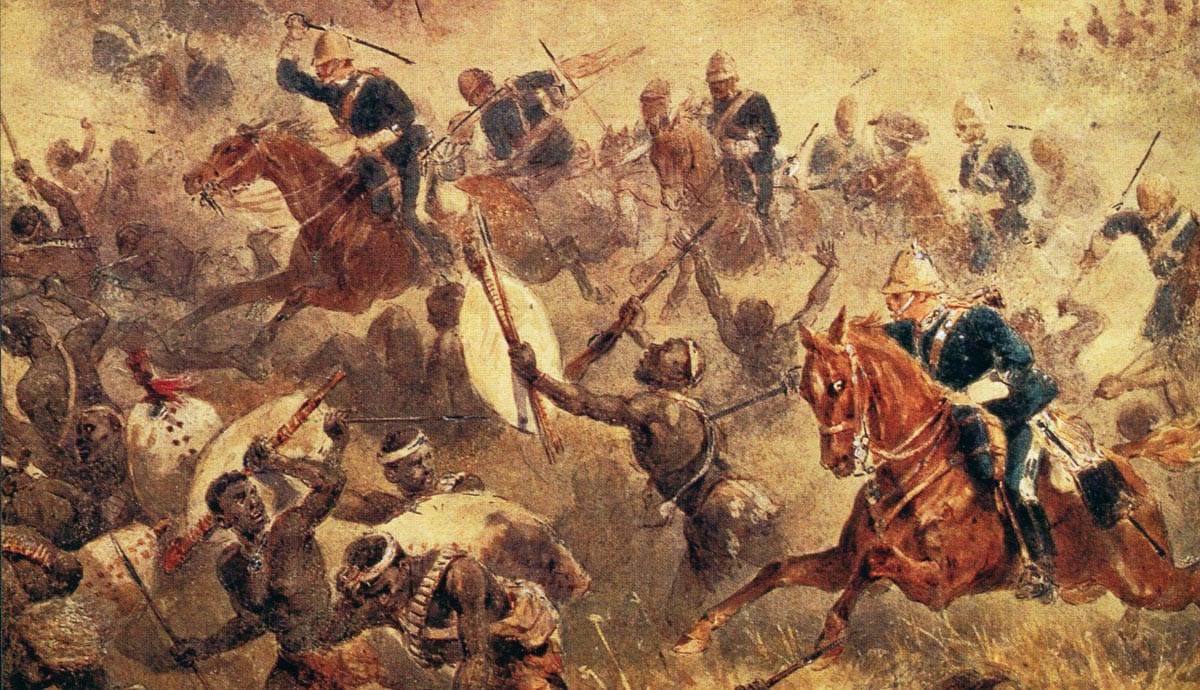 In 1879, the British Empire went to war with the Zulu Kingdom on the east coast of South Africa. Having been exceedingly successful in their battles with native peoples, it was understandable that the British would have had a certain degree of overconfidence. The Zulus, however, were known for their successful military culture. The Zulu Kingdom was young, having only been formed with the accession of Shaka Zulu in 1816, but their brief history was one of capable and dynamic military prowess. They had scattered or subjugated all the tribes around them and had fought many conflicts with the Boers. The British Empire was the most powerful empire on the planet, and it easily had the resources to defeat a small, technologically inferior African kingdom. But before it was done, the Zulus would seriously injure British military pride, and thousands of British soldiers would lie dead under the scorching African sun. The Anglo-Zulu War would be a bloody affair.

The Prelude to the Anglo-Zulu War

As with all wars, the causes for the Anglo-Zulu War were complex and went back many decades before the war started.

In the second half of the 19th century, the British Empire was ambitious in its expansionist policies. Any land seen as being profitable was marked for annexation. The 1867 discovery of diamonds led to the British annexing West Griqualand into the Cape Colony. The following diamond rush saw the growth of the city of Kimberley directly on the border of the Orange Free State, which was a Boer republic. The Boer republics of the Orange Free State and the Transvaal subsequently ended their policy of isolation, and many Boers traveled into British territory to make their wealth in the diamond mines.

The British wanted to create a federation of colonies in South Africa, first approaching the Boer republics, which rejected the offer to join the British Empire. However, the burgeoning industry required a large pool of labor, and the British decided that the best source of cheap labor would be to subjugate the areas of South Africa under native control. As the most powerful native kingdom, it was believed that if the Zulus were conquered, the rest of the native tribes in South Africa would accept subjugation under the British.

In 1877, the British annexed the Transvaal Republic. The Boers objected, but they could do nothing. This would be one of the reasons for conflict later between the Boer republics and the British Empire. The country was suffering financial difficulties, and the Zulu threat remained for them too. The British annexation at least meant the Zulu threat would be dealt with. The Transvaal Republic gained its independence again after defeating the British during the First Anglo-Boer War in 1881.

The British administration in the Transvaal used the issue of border disputes to escalate the situation whereby a casus belli could be used against the Zulu Kingdom. A commission was set up to investigate the claims, but it was found to favor the Zulus. Thus, Bartle Frere, the high commissioner for South Africa, acting on his own, issued an ultimatum with a list of outrageous demands to King Cetshwayo, who naturally refused to fulfill their requirements even though he had desperately wanted to avoid conflict with the British. The Anglo-Zulu War was about to begin.

Lord Chelmsford, the commander-in-chief of the British invasion force, had assembled 18,000 troops along the border with the Zulu Kingdom, ready for the invasion. This force consisted of redcoats, colonial volunteers, and African auxiliaries. His initial plan was a five-pronged assault into Zulu territory. This was despite the fact that he had no authorization from the British government. In fact, the British government had been kept in the dark as much as possible to avoid any political interference, as the prime minister, Benjamin Disraeli, was staunchly opposed to a war with the Zulus.

With overconfidence, Chelmsford settled on a three-pronged attack, with the objective being the Zulu capital of Ulundi. On January 11, the invasion began. In command of a force of 4,700 men, Chelmsford crossed the Buffalo River at a mission station called Rorke’s drift and advanced unopposed to Isandlwana, where they set up camp. The whole advance had gone unopposed, and Chelmsford split his forces to inspect the surroundings, leaving the camp without enough protection. Chelmsford had also, in his overconfidence, abandoned British military doctrine and had not set up proper defenses. Unbeknownst to the British, the Zulus were extremely close. They had managed to outmaneuver the British and wrecked the British center column with an army 20,000 strong, inflicting a crippling blow to the British invasion plans. British casualties were well over a thousand, and all their supplies were captured, including hundreds of Martini-Henry rifles.

Chelmsford retreated out of Zululand, while in the aftermath, another force of Zulus that had been held in reserve at Isandlwana marched on the British garrison at Rorke’s Drift. The Zulu force numbered between 3,000 and 4,000, and although the soldiers were tired and hungry, their commander, Prince Dabulamanzi kaMpande was desperate for glory and ordered the attack on the mission station at Rorke’s Drift. The British garrison numbered a little over 150 men, including a few colonial troops and four civilians, who, against better judgment, had decided to stay. In the face of overwhelming odds, including rifles taken at Isandlwana, the British defense was desperate. The battle lasted well into the night and frequently became chaotic with a lot of melee combat.

The British, however, dazed and bruised, triumphed, and in the early morning of January 23, the Zulus left the field of combat. Seventeen British soldiers were killed and 15 wounded, while the Zulus lost 351 confirmed killed and about 500 wounded. Eleven Victoria Crosses were awarded, and the British press used the action at Rorke’s Drift to shift the focus away from the disaster of Isandlwana hours beforehand.

Meanwhile, the right flank of the British invasion had found itself besieged at Ishowe with its supply lines cut off, and a supply column had been wiped out at the Battle of Intombe The remaining left flank, consisting of 4,000 men under Field Marshal Sir Henry Evelyn Wood, was too small to carry the invasion on its own and had suffered its own loss at the Battle of Hlobane on March 28. The Anglo-Zulu War had gotten off to a disastrous start for the British and would have dire consequences for Chelmsford’s career.

However, things did turn in favor of the British. The day after Hlobane, the Zulus attacked Evelyn Woods’ entrenched positions at Kambula. Just over 2,000 men defended against a Zulu army of 20,000. This time, however, the British had prepared defenses and had learned the lessons of Isandlwana. The result was a Zulu rout. Initial reports suggest 758 were killed, but historians debate this figure. For the British, there were just 29 dead and 54 wounded. The Battle of Kambula was the turning point in the Anglo-Zulu War, and it broke Zulu morale. After the battle, a huge number of Zulu warriors refused to fight.

Meanwhile, Chelmsford’s force, attempting to relieve the contingent at Eshowe, was attacked at Gingindlovu. Chelmsford was prepared this time. The Zulu losses were estimated at 1,200, while the British only lost two killed and 52 wounded. The column reached Eshowe, and the British army evacuated the site on April 5, after which the Zulus burnt it down.

Chelmsford consolidated his gains which geographically amounted to what had been gained in January. The Zulu resolve, however, had taken a beating. Chelmsford was racing against time as Sir Garnet Wolseley was sent to replace him. Chelmsford wanted to bring the Anglo-Zulu War to a close with a single, decisive victory, but it would require several months of preparation. In June, he led a second invasion. This time he built proper defensive fortifications, and on June 4, the British forces arrived at the Zulu capital of Ulundi. Half an hour of sustained artillery and Gatling fire was enough to break the Zulu resolve, and the battle ended quickly. With his honor partially restored, Chelmsford turned over command to Wolseley. The Anglo-Zulu War was over, but Chelmsford would never serve in the field again.

The Aftermath of the Anglo-Zulu War

After the Anglo-Zulu War, the Zulu’s ability to resist was completely broken. The British reconstituted Zululand as a group of thirteen chiefdoms, guaranteeing that they would be engaged in petty feuds rather than be able to unite and pose a threat ever again. Cetshwayo was taken prisoner and sent to Cape Town but was soon released and returned to Zululand. He was not received warmly and, after a brief conflict, had to flee and give up all claims to the Zulu throne.

Today, Zululand is part of the KwaZulu-Natal Province of South Africa. Today, Zulu is the most widespread first language in South Africa, with roughly a fifth of the 60 million population speaking it as their mother tongue, while 14 million South Africans identify as ethnic Zulus.