English painter Bridget Riley is famous for her visually captivating contributions to Op art. Her works explore the world of optical illusions and visual experience. 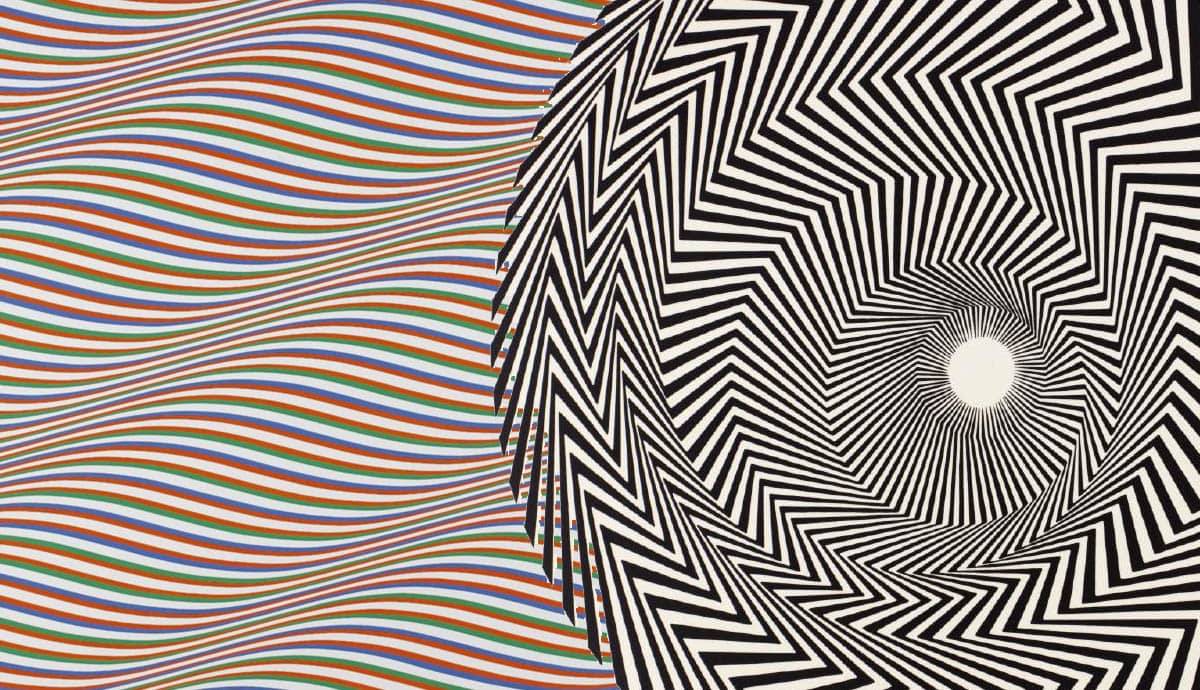 Bridget Riley’s works became a famous example of Op art in the 1960s. Her art is characterized by geometric forms, high contrast, dizzying optical illusions, black and white shapes, and vibrant colors. Despite the fact that her paintings are widely considered abstract, Riley herself emphasizes her role as a painter and not as an abstract artist. From her childhood on, Riley spent a lot of time looking at the world and nature around her. Her artworks represent her focus on visual experience. Even today, Riley still creates art that encourages the viewer to interact with it.

The term Op art is an abbreviation for optical art. The movement became popular in the 1960s through the works of artists like Victor Vasarely, Bridget Riley, and Richard Anuszkiewicz. Artists of the movement used geometric forms to create optical illusions in their abstract artworks. Paintings associated with Op art are also known for their thematization of perception and how color affects the viewer. By manipulating the lines, colors, and shapes of the painting, artists create illusions, ambiguity, or the sense of movement and flickering in their paintings. Bridget Riley’s work “Blaze” is one example of the visual illusions created in Op art. The spiral generates a feeling of movement after the viewer looks at the artwork for a longer period of time.

Who Is Bridget Riley?

Bridget Riley was born in 1931 in Norwood, London. She studied art at Goldsmiths College and the Royal College of Art. From 1957 to 1958, she worked as an art teacher in Harrow. She later also taught at Loughborough School of Art, at Hornsey School of Art, and at Croydon School of Art.

At the beginning of her career, Riley created figurative paintings in a semi-impressionist style. Around 1958, she switched to pointillist landscapes. It was not until 1960 that Bridget Riley created her first abstract op-art works that she is best known for today. Influenced by artists like Victor Vasarely, Riley started experimenting with geometric shapes, abstract forms, black and white lines, and different colors in order to create optical illusions and movement in her works. She became well-known by showing her work next to artists like Victor Vasarely and Josef Albers in the famous exhibition “The Responsive Eye” at New York’s Museum of Modern Art in 1965.

While optical illusions continued to be an important characteristic of Bridget Riley’s work, the artist started to use more color in 1967. The geometric forms of her works were sometimes replaced by curved lines which created a wavelike movement. One example of these colorful and wavelike paintings with an almost dizzying effect is called “Gala” from the year 1974.

A few years later, Riley processed her impressions of trips to places like Egypt and India through her art. Her painting “Achæan” from 1981 is inspired by ancient tomb paintings and landscapes that the artist saw in Egypt. Another work called “Nataraja” from 1993 is a reference to Hindu mythology and the god Siva who is often depicted as the lord of the dance.

In addition to her regular paintings, Bridget Riley has also been commissioned to create several murals, including the interior of the Royal Liverpool Hospital in 1983, a wall painting for the Chinati Foundation in 2012, and a mural called “Messengers” for the National Gallery in London in 2019.

Optical Experiences and the Way We See

One of the most important aspects of Riley’s work is the examination of perception and how we see. The artist is known for exploring optical experiences in her paintings. Her works are inspired by her own perception of the world around her, nature, and artworks. In an interview with Sir John Leighton, Riley said, “Before I started to draw though, I started to look.” She added that she “actually didn’t think about being an artist at all,” but that in order to further exercise her habit of looking she needed to go to an art school. The optical illusions in Bridget Riley’s paintings often remind the viewer of the way they see, how their eye processes visual stimuli, and that the things we perceive are not always what they seem to be.

The connection between Bridget Riley’s art and its exploration of visual perception can be partly explained through her involvement with impressionist and pointillist ideas and methods of painting. The exhibition “Bridget Riley: Learning from Seurat” took place from 2015-2016 at the Courtauld Gallery and examined this relationship between Seurat’s pointillism and Bridget Riley’s Op art. Her work was significantly influenced by Georges Seurat and his emphasis on the optical experience of artworks.

In 1959, Riley copied Seurat’s Bridge at Courbevoie which was essential for her comprehension of color. By looking at Seurat, Riley learned how to use color to induce certain effects or illusions in her art. The pointillist technique is based on the painting of small and differently colored dots that are placed next to each other. The different colors of the dots that were placed very close to each other result in the appearance of one vibrant and luminous color. This illusionist approach to color and art can also be found in Riley’s work.

Despite the fact that Bridget Riley is known for her geometrical and repetitive shapes, optical illusions, and what can be described as highly abstract art, she draws inspiration from artists who painted in completely different styles. Riley once said that she would not describe herself as an abstract artist but as “a painter first and foremost”, which makes these influences less unexpected than they may seem at the first glance.

The painting Diana and Actaeon by Titian depicts a myth from Ovid’s Metamorphoses. It shows the moment of the story where the hunter Actaeon discovers the goddess Diana during her bath. Enraged by Actaeon’s intrusion, Diana turns him into a deer. Unable to recognize Actaeon’s former self, his own hounds consequently hunt and kill him.

Bridget Riley, who pays close attention to the visual influences around her and is very interested in the exploration of color, wrote: “Titian’s legendary mastery of his palette, the color mixing and handling of his crimsons, blues and yellow ochres, is responsible here for what Delacroix later called the first merit of a painting, to prepare “a feast for the eye”.”

Well-known for displaying romantic sceneries, John Constable made an important contribution to the genre of landscape painting. Constable was born in Suffolk and often depicted the environment around him. Like Bridget Riley, he paid close attention to his natural surroundings. Constable’s painting Dedham Vale shows one of his favorite subjects and depicts the view towards Dedham church which was situated close to the watermill of his father. Riley described the painting as an interaction of “opposing and conflicting natural forces“ and “a beautiful and very particular envelope of light.”

The title of Henri Matisse’s painting, La Leçon de Peinture or La Séance de Peinture can be translated as “The Painting Lesson or The Painting Session.” It shows a young girl bent over a book and an artist, possibly Matisse himself, painting on a canvas. Riley, seemingly enticed by the mysterious relationship between the two subjects of the painting, described the scene in an almost poetic manner: “The bond is imperceptible, a mystery plainly visible for all to see and which, by these means, increases in density and impenetrability. The viewer continues looking, scrutinizing the entire situation – nothing is revealed.“ Bridget Riley mentioned that Matisse’s art and the way he was drawing always attracted her attention.

Bridget Riley began to oppose the commercial aspect of the art and fashion world early in her career. When her work was used as a print for fashion items, she was bothered by the exploitation of her Op art for commercial purposes. Keith Moon, the drummer of the band The Who wore a T-Shirt with a print of Riley’s work Blaze for a photograph in front of the Union flag in 1966. At the time, there was no copyright protection for artists in the US.

Bridget Riley also dedicated herself to the problem of unaffordable workspaces for young artists in London. Along with fellow artist Peter Sedgley, Riley founded SPACE, which stands for Space Provision Artistic Cultural and Educational, in 1968. When Sedgley and Riley visited the post-industrial lofts in New York that artists used for both working and living, they thought that the empty warehouses in London could be used in a similar way.

In opposition to art that for many people feels like it’s made only for a small and elitist circle, Riley includes the viewers in her work and offers them an immediate optical experience. Bridget Riley’s art is supposed to be a social act. It integrates the viewer and is completed by everyone’s experience and interpretation of the work. Her works need both the creator and the spectator as well as the interaction between them in order to be art.

Riley said that young people viewing her work can see that her art is about the way she thinks. According to Riley, this is why they enjoy her work so much since they know that they are a part of the artwork. The artist added that she is “very thrilled that they feel included.” When walking into an exhibition with Riley’s works, you, as a spectator, become an important part of the artwork itself.