HomeStoriesUtterly Impregnable: Castles in Europe & How They Were Built to Last

Utterly Impregnable: Castles in Europe & How They Were Built to Last

Castle design in Europe used a number of clever features to make themselves tougher to besiege. Here are 7 of the most important features. 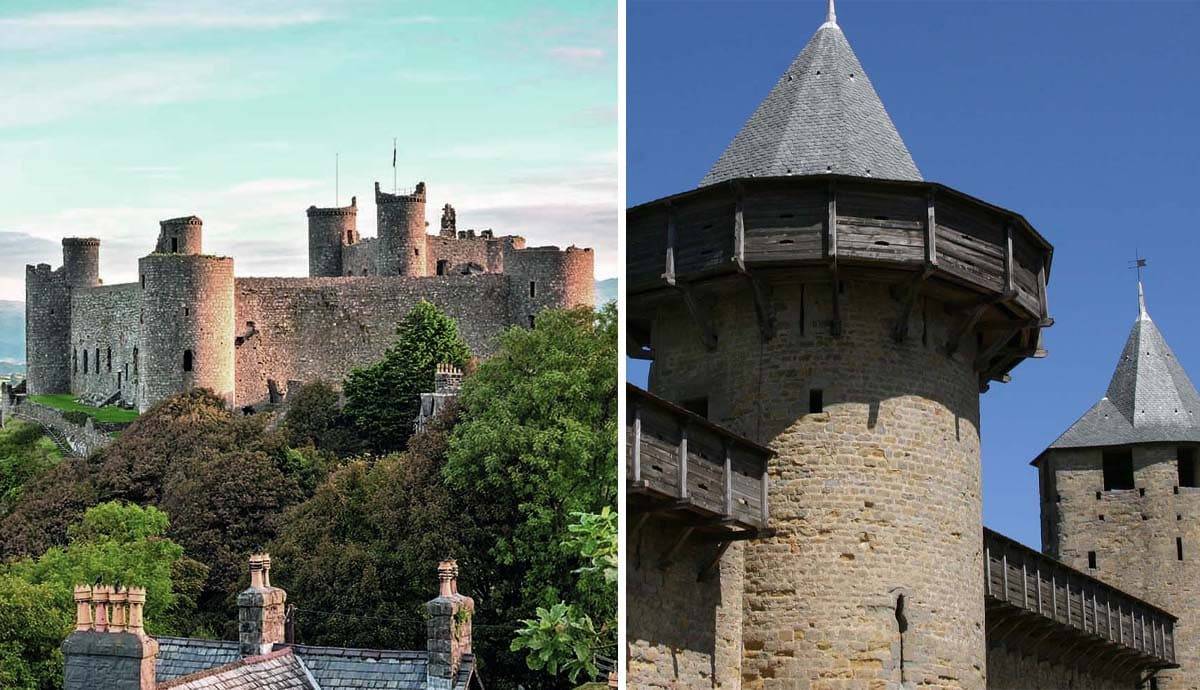 From simple earthworks and wood to the towering edifices of solid stone, castles in Europe stood for centuries as the ultimate symbol of power. They served as bases from which lords and kings could rule over the land and its inhabitants. From inside their halls, they could rely on the fact that they were virtually untouchable.

Castles were built with one overarching purpose in mind: to be defended. Every thought that went into their architecture and construction was one whereby the structure had to be secure by design. As the centuries passed, architects, masons, and designers evolved ever-intricate patterns and features that would make their structures able to withstand the most desperate of sieges. Medieval castles did their job. And they did it well.

Here are seven innovations that castles employed for defensive purposes.

1. Castles in Europe: Their Placement

Natural features were key in being able to build a defensible castle. The earliest motte and bailey castles in Europe were a Norman innovation and were built on small artificial hills; while hills were a popular choice, castles were also built on cliff faces and in the middle of lakes. Ultimately, any place that could command a decent view and was difficult to get to was a preferred location. Castles located at the top of inclines would often have switchback paths leading up to the gatehouse. The enemy would therefore have a difficult time trying to get close to the entrance, all the while being shot at by the defenders.

The first castles in Europe used a simple wooden palisade to fence their structure. As warfare evolved, it quickly became obvious that defensive capabilities would have to be improved. Instead of wood, stone was used (and later, brick). The higher, the better, but walls also had to be thick enough to withstand stones being hurled at them by catapults and trebuchets.

At the top of the wall, along the inside, ran a walkway, and the part of the wall that jutted above the walkway level was called the parapet. The edge of the parapet (also called battlement) was usually topped off with crenellations, which allowed defenders to see their enemies as well as hide from them. With the creation of stone walls, castles in Europe evolved very quickly from simple fortifications to impregnable fortresses.

Although in smaller castles, a tower could be separated from the wall and used as the main keep, towers were generally connected to the walls and indeed linked sections of the wall together. Not only did this provide structural strength, but it also gave the defenders a better vantage point. Inside the towers, stairwells in Norman castles ascended clockwise. This feature is speculated to have been designed bearing in mind that most people are right-handed. Attackers ascending the stairs would have less room to swing their weapons, while the defenders would have not only the high ground but also a wide space to their right to swing their swords.

Towers were originally built on square foundations, but defenders realised that enemy forces could tunnel under the defenses and weaken the tower structure. From the latter half of the 13th century onwards, castles in Europe were built with only round towers as they offered more structural protection from being undermined.

3. From Hoarding to Machicolations

From an early era, hoarding was added to the top of castle walls. This was a temporary wooden structure that extended the top of the walls outward so that defenders could improve their field of fire as well as look directly downward upon their enemies. Holes in the hoarding floor would assist the defenders in dropping stones and other nasty things on the enemy.

Hoarding was often prefabricated and stored during peacetime. Holes called “putlogs” in the masonry walls allowed for the connection of hoarding to the walls.

In later castles, hoarding was replaced with stone machicolations which were permanent structures that offered more protection and did a similar job to hoarding. Machicolations, however, were focused on being holes rather than walkways. Machicolations could also be built in the form of a single hole called a box-machicolation.

4. The Moat and Drawbridge

Common features among castles in Europe that play to their stereotypes are moats and drawbridges, such as that of the Scottish Threave Castle, pictured above. Moats weren’t always filled with water. The most common defensive structure in virtually any situation is a ditch. Thus, moats started out as ditches. Some had spikes added for extra effect. Eventually, many of them were filled with water which quickly became absolutely foul as it was stagnant and the garderobes emptied into it. Those unlucky enough to fall into it were very likely to catch diseases.

In circumstances where a moat surrounded the castle, it made sense to include a drawbridge to capitalize on its defensive capabilities. In early castles, what would become the drawbridge overtime was just a simple bridge that was destroyed in the event of the castle coming under siege. Eventually, however, drawbridges evolved into increasingly intricate and effective winches, pulleys, and counterweight systems that could handle bigger structures.

Unlike in many fantasy depictions, entrances in reality needed to be small. They needed to accommodate the width of a cart or two, but anything bigger would become a liability. The gate was obviously the weakest point in the European castle’s defenses, so it made sense to reinforce it by surrounding it with a gatehouse designed to accommodate defenders needing to kill enemy attackers. And it made sense to make the opening as small as possible–a far cry from the grandiose ideas of fantasy. The gatehouse itself became the most dangerous part of a castle for any attacker.

With many layers of defenses, the gatehouse structure often accommodated several gates, one or more portcullises, box machicolations, and many loopholes (arrow slits) and murder holes. The latter was simply channels in the masonry, or holes that could accommodate objects or substances being tossed through them. These objects and substances usually consisted of rocks, spikes, or very hot liquid.

Having to accommodate so many gates and portcullises as well as the potential drawbridge mechanism made gatehouses very large in many circumstances, so much so that the gatehouse ended up functioning as the keep, or the main part of the castle. In such cases, the gatehouse was referred to as the “gatekeep.”

In the event that the outer gate was breached, the enemy soldiers could be trapped between closed gates and portcullises, where the defenders could unleash a plethora of nasty surprises on their hapless victims.

Castles in Europe were designed with loopholes or “arrow slits” all over the walls and the towers. Defenders could hide behind thick stone walls and be completely unseen while at the same time being able to hit any soldier that came within range. Originally, loopholes were single vertical slits to accommodate bows. As crossbows became more popular, loopholes started resembling crosses to accommodate both weapons.

Ultimately, loopholes evolved into gun loops as the shape needed to take into account new weapons brought about by the invention of gunpowder. Although the forms varied, they generally resembled a standard vertical loop with a bigger round opening at the bottom.

Some castles in Europe had an extra line of defense by including a barbican, a fortified gatehouse forward of the main gatehouse and a defensive curtain wall. The natural and artificial features on which castles were built often made the gatehouse the only way into the castle. Adding a second gatehouse in front of the main gatehouse, along with portcullises, murder holes, and all the other defensive entrapments, made getting into the castle twice as deadly.

The Ultimate Purpose of Castles in Europe

Ultimately, castles in Europe were built to be physically tough and to withstand protracted sieges. In addition to the above examples, individual castles often included innovative surprises of their own. For instance, in several such cases, the entrance to the keep was located high above ground level and accessible by a wooden staircase. This staircase could be removed or dismantled, making it almost impossible to get into the keep.

Castles in Europe were also residences but were designed to be run and defended by as few people as possible. Sieges were often long and protracted affairs that could last months or even years. Before being besieged, it was common for those in charge to evacuate all non-essential personnel. An excellent example of this is Harlech Castle in Wales, which was defended with a garrison of only 36 men shortly after construction finished in 1289. During the Wars of The Roses, the castle was besieged for seven years before finally surrendering to the Yorkists.