In 2017 Damien Hirst attempted his most ambitious project yet, a fake shipwreck titled 'Treasures From the Wreck of the Unbelievable.' 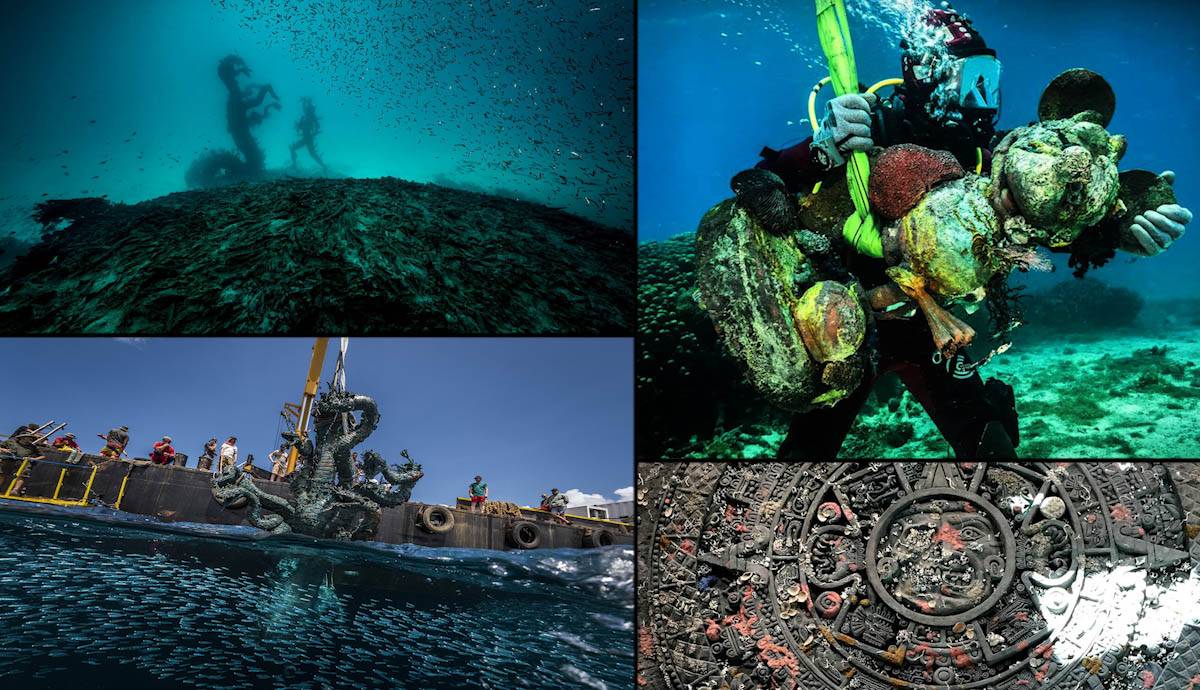 Damien Hirst is one of contemporary art’s most controversial figures. Praised by some for his ever-sharp wit, criticized by others for his emerging ennui, Hirst can’t seem to be pinned down. The formaldehyde-drenched shark which made him famous (The Physical Impossibility of Death in the Mind of Someone Living, 1991) is still the subject of ideological debate. Was it a money grab, or a sincere commentary on art in the shadow of capitalism? A cheap gambit for attention, or a dire warning against the damaging ways we live our lives?

Who is Damien Hirst?

In the last thirty years, Damien Hirst has carved a niche for himself as a master with a certain ineffability. Since his art is so difficult to define, everyone can be just as satisfied (or dissatisfied) as they would like to be. This has propelled Hirst forward for decades as one of Britain’s most controversial artists. It has also garnered him a following of wealthy investors willing to fund his wildest artistic exploits.

Following the negative reviews for his underwhelming 2009 show, No Love Lost, at the Wallace Collection, London, many viewed Treasures… as a grand comeback attempt. And grand it certainly was, encompassing some hundreds of works in marble, resin, and painted bronze, some of the works reaching gargantuan size and height. However, despite its grandiosity, many critics failed to be impressed by the opening of the show, citing its kitschy nature and lack of inspiration. So what did the show really entail, and why did a once-infallible artist so severely miss the mark?

Damien Hirst started his career in the group now known as the Young British Artists (YBA), a group patronized predominantly by Charles Saatchi and known for their boundary-pushing interpretations of what can become contemporary art. Hirst’s most famous early works set a precedent for years to come, with edgy, subversive concepts, content and imagery. Themes of death, religion and medicine dominated his early art.

Despite the fact that Hirst makes up the idea for his projects, most of his actual artworks are created by teams of studio artists following Hirst’s specifications. Hirst himself has said that some of his artworks are not even touched by him until just before leaving the studio. This method of artistic production might seem controversial today, but it isn’t uncommon, harking back to the old masters of the Renaissance.

Over time, the concepts behind Hirst’s work seemed to lose their impact. Although Damien Hirst is known for his trademark motifs (animals in formaldehyde, butterfly wings, and cabinets of medical pills), after years of mass-produced Hirst originals, the critics became bored, and the market value of his artworks threatened to crash. After his first response to the rising demand for fresh concepts failed (the ill-reviewed No Love Lost painting show – see above), Hirst began work on a project larger and more ambitious than anything he had ever done before: Treasures from the Wreck of the Unbelievable.

The Lore of the Treasures… Shipwreck

In order to wow his waiting public, Hirst had to conceptualize something bigger than anything he had done before. The best way to gain attention, he decided, was through the production of a mockumentary, a fake documentary which chronicles a non-existent tale through false artifacts and interviews. Hirst’s mockumentary explores the excavation of a newly discovered shipwreck, a boat named Unbelievable. According to the film, the boat belonged to a freed slave from the first or second century named Cif Amotan II, a man who used his liberated lifestyle to travel around the world collecting priceless artifacts from countless civilizations.

Of course, none of this is true. The shipwreck never occurred, the artifacts were fabricated, and the captain of legend never existed. In fact, Cif Amotan II is an anagram for I am fiction. All of the glamorous shots of statues rising from the ocean covered in coral are staged. Each so-called artifact was meticulously crafted by Hirst or, truthfully, by his paid assistants.

While Damien Hirst has never been one to elaborate greatly on the meaning of his projects, this work seems conceptually sound. It included inventing outlandish fantasy, building fake artifacts and crafting a historical timeline in which different human empires could have been connected by art. Each of these is a fertile basis for an engaging art collection, without further explanation from the artist. However, when Treasures from the Wreck of the Unbelievable opened in Italy in 2017, it was received poorly by audiences and critics alike. So where did Hirst go so wrong, when he could have done so well?

Treasures from the Wreck of the Unbelievable opened on April 9, 2017, in Venice, Italy. The contemporary art exhibition took place in both the Palazzo Grassi and the Punta della Dogana, two of Venice’s largest contemporary art galleries, both owned by François Pinault. When this show took place, it marked the first time the two galleries had been dedicated to a single artist, giving Damien Hirst over 5,000 square meters of exhibition space to fill. Just so it’s clearer, the Guggenheim Museum in New York City has approximately 4,700 square meters of gallery space and often displays over one hundred different artists’ works at once.

Needless to say, Hirst’s use of this space would have to be grandiose, commanding, and  prolific, a challenge he seemed all-too ready to accept. The focal points of the exhibition were several large statues cast in bronze and one stories-high statue made of plaster and resin. The final exhibition included hundreds of pieces, with the structure as follows. There were the “legitimate” treasures, which were covered in painted coral as though they truly were recovered from the ocean floor. Then there were museum copies, staged as reproductions of the shipwreck treasures, recreated in varying materials without the obscuring sea life. And finally, there were collectible reproductions, scaled down and cast in various materials, for the collector who wished to take a piece home from the exhibition but who might not have been able to afford the “original” pieces.

The topics of the works themselves, too, were all over the place. In Mickey, we find a coral encrusted bronze of Mickey Mouse himself, most of his features covered over, but his shape is easily recognizable. In Hydra and Kali (reproduced in bronze and silver), the Hindu goddess wields six swords in battle against the infamous Greek monster. Huehueteotl and Olmec Dragon depicts a Transformer robot, Calendar Stone is a bronze reproduction of an Aztec calendar, and Metamorphosis is a Kafkaesque statue of a woman with a bug’s head.

All in all, this contemporary art show was massive. But how impactful was the work itself? Damien Hirst has been under fire for years now for his market-saturating production, with the harshest critics accusing him of money-grabbing schemes with no real artistic value. Treasures… does nothing to quell that accusation, with its hundreds of statues and reproductions all aimed at attracting art buyers.

But fans of the work praise its imagination, and its fearless rewriting of history. Of course, a Roman ship would have no business carrying an Aztec calendar – but it’s no more ridiculous than a statue of Mickey Mouse, either. It is that very ridiculousness that is the point of the show, artist and money and politics aside. What if it were real? How would we cope with the knowledge that everything we thought we knew was wrong? And in 2017, in the midst of the new post-truth era, that kind of question was just what the world was ready to see. Surely many people rolled their eyes and knew the whole thing was fake right away. But just as surely, someone watched the mockumentary and felt a flicker of doubt, was forced to grapple with a whole new perception of the world, if only briefly. Statues aside, that is the real art of Treasures From the Wreck of the Unbelievable.

In conclusion, is Treasures From the Wreck of the Unbelievable needlessly self-aggrandizing? Of course it is. It’s a Damien Hirst art show, and without a healthy dose of egoism it wouldn’t be his work. The sheer amount of money poured into the project is extreme. And yet, like in many of Hirst’s great works, the concept is beautiful. He wouldn’t be famous if it wasn’t. “Consider how little we know about history,” the show seems to say, “wouldn’t it be grand if it were real?” How easily the real discovery of even one of these objects could shatter our understanding of human history. It’s a fantasy worth indulging in, even if only for a moment.

By Sasha SavenkoBA Art History w/ Contemporary Art and Theory ConcentrationSasha is an artist and musician from Richmond, Virginia. She received a B.A. in Art History from the University of Washington, Seattle, with a focus in Contemporary Art Theory and Architecture. When not reading or writing, she dedicates her time to interdisciplinary practice in visual arts, music, film, and critical theory.

5 Surprisingly Famous and Unique Artworks of All Time