A self-confessed wild child, British artist Damien Hirst shocked the world with his dead animals in formaldehyde, and continues to raise eyebrows today with lavish, ostentatious projects that push the boundaries of good taste. 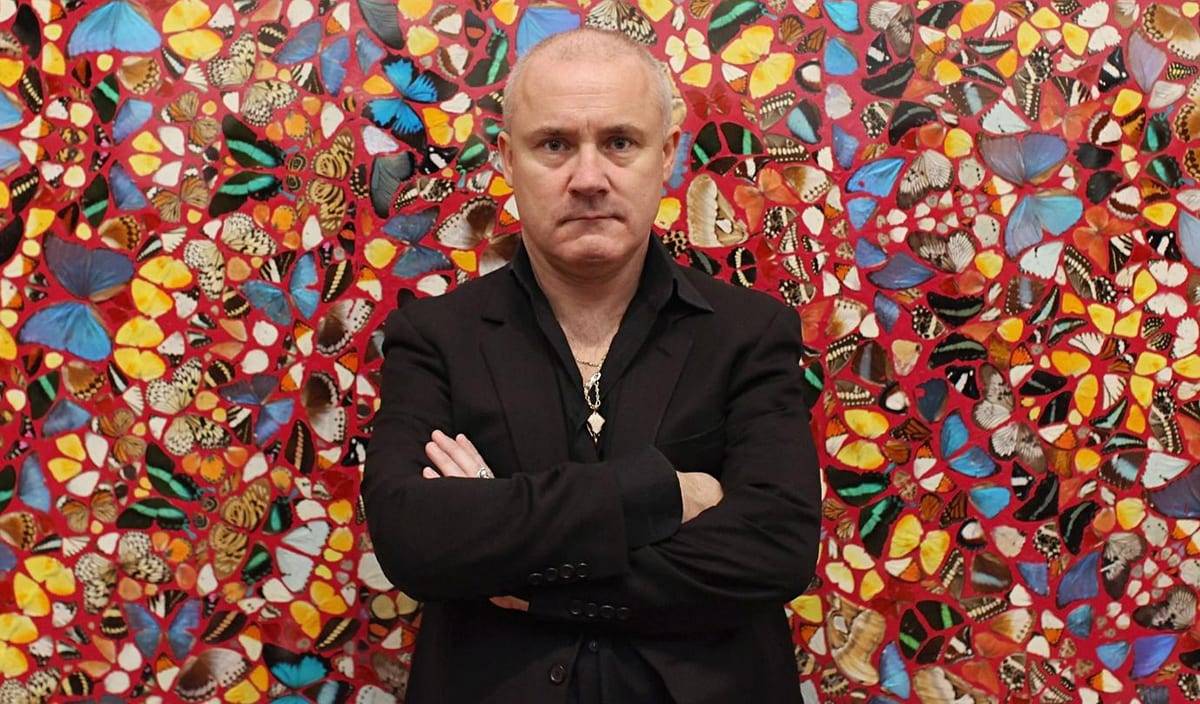 A notorious member of the Young British Artists Movement, Damien Hirst is world-renowned for stirring up shock and provocation. He made his name in the 1990s with theatrical displays of rotting meat, dead animals in formaldehyde and cabinets stuffed with medication, earning him a reputation as the art world’s enfant terrible. After being swept up by art magnate Charles Saatchi, Hirst began selling his artworks for extortionately high prices, making him one of the richest living artists of all time.

Damien Hirst was born in Bristol in 1965. Growing up in Leeds, Hirst’s mother tried to raise him as a Catholic, but he was a rebellious child with a morbid streak. His stepfather left the family when Hirst was just 12, leaving him alone with his mother. As an adolescent Hirst was fascinated by pathology books containing images of disease and injury; this interest prompted him to take on a work placement at a mortuary. There he took the infamous portrait, With Dead Head, 1991, a photograph which would precede the gory material in much of his later work.

Hirst was a wild teenager who often got into trouble, and was caught shoplifting a few times. In spite of this, he gained a place to study art at Goldsmith’s College in London. In 1988, while still a student, Hirst organized the iconic Freeze exhibition in a disused London Docklands warehouse. Featuring work by him and his fellow Goldsmith’s contemporaries including Sarah Lucas, Mat Collishaw, Fiona Rae and Gary Hume, the show presented a series of deliberately provocative, sensationalist artworks, causing an art world and media frenzy, and is now seen as the launchpad for the notorious Young British Artists (YBAs) Movement.

Hirst’s practice throughout the 1990s explored themes of life, death, science and religion. The installation A Thousand Years, 1990, displayed a rotting cow’s head in a large glass vitrine filled with maggots, who were born into flies and fried to death by an insect killer.

The work captured the attention of art impresario Charles Saatchi, who bought the work, catapulting Hirst into the spotlight. With Saatchi’s backing, Hirst began the series Natural History, in which dead animals were suspended in glass vitrines of formaldehyde. The Physical Impossibility of Death in the Mind of Someone Living, 1991, was made from a dead tiger shark that Hirst bought from an Australian shark hunter, and was featured in Charles Saatchi’s landmark Young British Artists exhibition in London.

Throughout the 1990s Hirst continued to cause shock and uproar, dividing critical and public opinion with his confrontational artworks. Whether loved or hated, he was one of Britain’s best known, and wealthiest artists. Nominated for the prestigious Turner Prize in 1992, Hirst later won the prize in 1995 with his Mother and Child Divided, 1995, featuring a cow and calf divided into segments and displayed in a series of glass vitrines. Throughout this time Hirst’s lifestyle was as reckless as his art, as he partied hard with his fellow YBA contemporaries.

As a colourful counterpoint to his animal carcasses, Hirst has also continued with various recurring series’, including spot paintings, butterfly arrangements, spin paintings and various pharmacy displays featuring medicine cabinets and medical paraphernalia. Though conflicting in content, they share the same clean, minimalist, medical displays as his Natural History works. Hirst also branched out beyond the art world, opening the famed series of Pharmacy restaurants, producing films and books, and making music with the band Fat Les.

Hirst’s more recent art projects have been made with huge, ostentatious budgets, prompting many critics to accuse him of being crass and vulgar. Others have noted a drop in the market value of his art since the early 2000s, making his work a less appealing option for some collectors. But with a major retrospective in the Museo Archeologico Nazionale in Naples in 2004, and another at Tate Modern in 2012, there is no doubt that Hirst has made his inimitable, indelible mark in British art history.

Hirst’s mother once melted one of his Sex Pistols records on the stove and shaped it into a fruit bowl to teach him a lesson.

Hirst’s infamous artwork Away from the Flock, 1994, a sheep preserved in formaldehyde, was vandalized by artist Mark Bridger, when he poured black ink into the tank and renamed the artwork “black sheep.” In response, Hirst sued Bridger, who was given two years’ probation.

Hirst’s artwork titled Two F*****g and Two Watching, 1995, featuring a rotting cow and bull, was banned by public health officials in New York who feared “vomiting among the visitors.”

Hirst’s artwork, For the Love of God, 2007, a platinum cast of a human skull had 8601 diamonds on it. Hirst spent £14 million making it, but sold it for £50 million, making it the highest price ever paid for a single work by a living artist.

Teenage artist Cartrain used an image of Hirst’s diamond-encrusted skull in a series of collages, which he sold. But when Hirst found out, he reported Cartrain for copyright and seized the collages and profits.

In retaliation, Cartrain stole some pencils from Hirst’s installation Pharmacy. Both Cartrain and his father were arrested for harboring pencils reportedly worth £500,000.

Hirst made history when he chose to represent himself without a gallery at a Sotheby’s auction in 2008, the first time an artist of his stature had ever done so. Titling the auction Beautiful Inside my Head, sales totaled an astonishing £111 million, a record for an auction of works by a single artist.

The market value of Hirst’s artworks has been dropping since then; the 2008 auction is now seen as Hirst’s economic peak.

To create Hirst’s vast artwork Treasures from the Wreck of the Unbelievable, 2017, he had a series of marble sculptures of gods and mythical creatures made, which were submerged in the ocean, before being retrieved, which gave them the aged appearance of ancient relics.

Hirst’s net worth is still £215 million, making him one of the richest artists of all time, a fact that has attracted both criticism and praise in his much-publicized career.