Oceania exhibitions have made a significant difference, brought international attention to Pacific Island arts and identity, and changed how treasures are displayed and interpreted for the public. 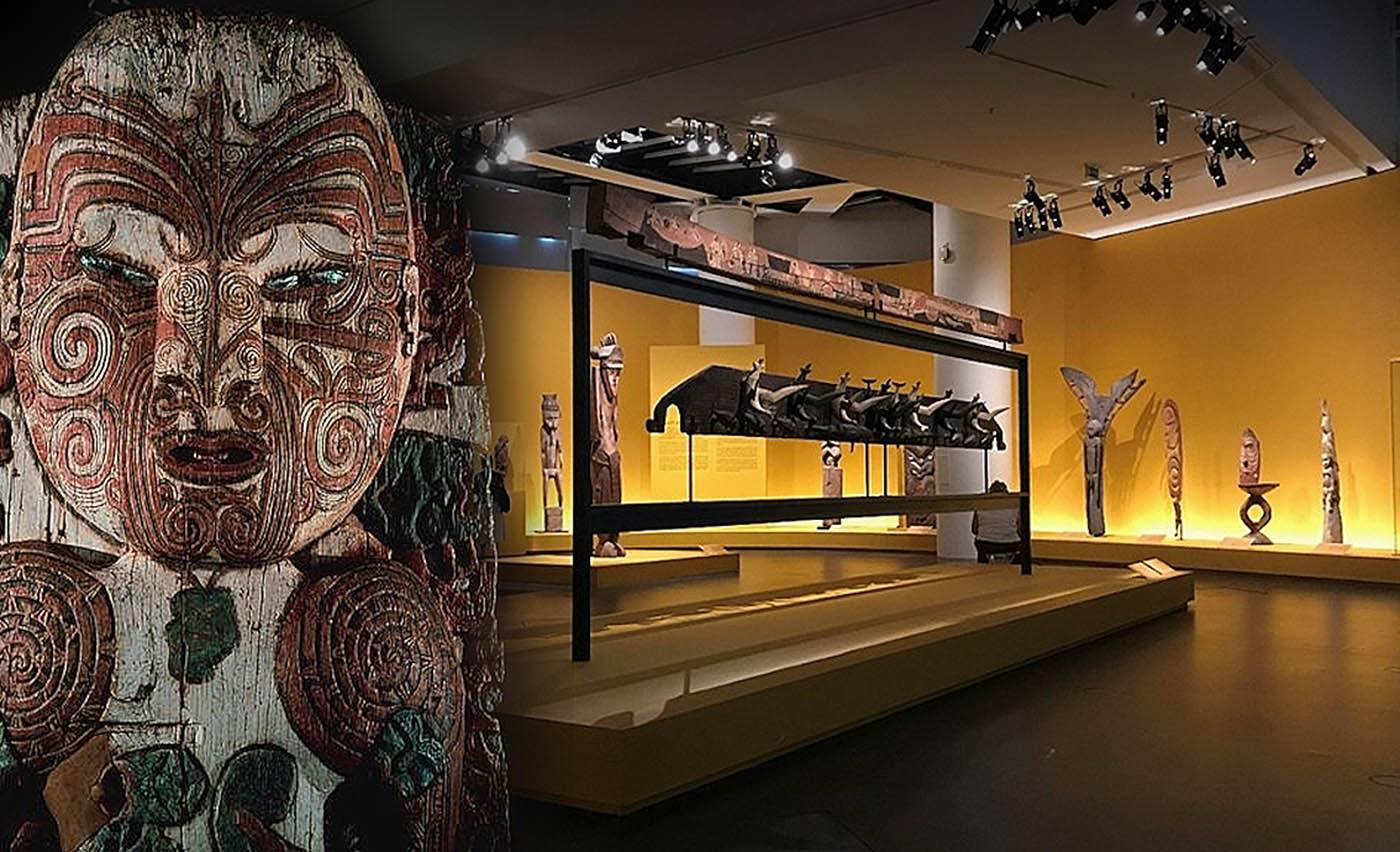 With the new scramble for decolonization in the arts and heritage sector, we have seen numerous exhibitions dedicated to the histories, cultures, and arts of former colonized countries and continents. Oceania exhibitions have emerged as challengers of the traditional model of exhibitions and provide the groundwork for indigenizing and decolonizing exhibition practices. Here is a list of 5 of the most significant Oceania exhibitions that have made a difference and changed the methodologies of museum practice.

This inaugural exhibition is recognized as the one that introduced Māori art on an international scale. Te Māori served as the paradigm shift in how the world looked at Pacific art. The co-curator of the exhibition, Sir Hirini Mead, said at the opening ceremony:

“The frenzied clicking of the cameras of the international press present at the ceremony assured us all that this was a historical moment, a break-through of some significance, a grand entrance into the big international world of art. We had suddenly become visible.”

It introduced now standard decolonization museology methods: dawn ceremonies that allowed interaction with Māori to interact and touch their treasures, Māori accompanying the exhibitions as guardians, and training them as museum guides and use of both English and Māori language. The Oceania exhibition opened in New York City in 1984 at the Metropolitan Museum of Art and made its way through select museums in the United States before ending up in New Zealand in 1987.

This paradigmatic shift in museology was also reflected in the broader context of Māori educational and political activism of the 1970s and 1980s. There was a resurgence of Māori cultural identity during the 1970s and ’80s concerning the violent histories of colonialism in New Zealand and the continued issues of the treatment of Māori in New Zealand.

With a display of over 174 pieces of ancient Māori art, the works chosen represent over 1,000 years of Māori culture. One of the many standout works of the exhibition was the Gateway of Pukeroa Pa, which stood at the entrance to the exhibition, heavily tattooed with Māori and body painted white, green, and red, carrying a set of Māori clubs, or patu.

To commemorate 250 years since the start of Captain Cook’s voyages and invasions, museums and galleries developed several Oceania exhibitions to open in 2018-2019. One of these was Oceania, which was displayed at both the Royal Academy of Art in London and the Museé du Quai Branly in Paris, titled Océanie.

The exhibition used three themes to tell the stories of Pacific Islanders: Voyaging, Settlement, and Encounter. At both renditions of the exhibition, Kiko Moana, by Mata Aho Collective, was at the front to greet visitors. The collective created the piece around the idea of how a creature called taniwha would adapt to combat ocean pollution and climate change. Several masterpieces on display were subject to restitution concerns: the ceremonial trough from the British Museum did not travel to the Museé du Quai Branly due to conservation concerns.

The Oceania exhibition was widely praised at both institutions for their use of decolonization methods and careful intentionality to display objects from Pacific perspectives. An outcome of the exhibition was the positivity of the evolving museum practice, as it served as the first exhibition to display a survey of Oceanic art and offered mainstream exposure to Pacific Island art and culture. The exhibition also revitalized talks of restitution of those collections.

Because of the Te Māori exhibition in 1984, there is now protocol in how treasures are interpreted and displayed as well as around the caring for objects. The show’s curators, Adrian Locke at the Royal Academy and Dr. Stéphanie Leclerc-Caffarel at the Musée du Quai Branly, partnered with Pacific Island curators, artists, and activists to ensure customs were adhered to.

The exhibition was developed by Oceania curator Dr. Ben Burt and Head of Interpretation Stuart Frost as a response to the Collecting Histories series. The series of talks, given by various British Museum curators, focused on providing context for visitors on how objects came into the museum’s collections.

To date, this is the second exhibition that the British Museum has put on regarding the Solomon Islands, with the first opening in 1974. The British Museum has put on over 30 exhibitions dedicated to the Pacific Islands, but this is the first to address colonialism outright. However, some might view it as sidestepping by adding in the varieties of collection methods, as the acquisition might still result from colonial relations and power imbalances.

This Oceania exhibition directly influenced the Collecting and Empire Trail that debuted at the British Museum in the summer of 2020, providing provenance and context to objects around the museums acquired through colonization. Its methods of interpretation will influence how objects of colonial context are displayed and interpreted in the British Museum.

4. Bottled Ocean: Exoticizing The Other

After Te Māori, traditional Pacific Island art began to be displayed in museums and galleries. Contemporary Pacific artists were also gaining success in the art market by having their art displayed. However, there was an underlying duality and concern that their art was being shown because it looked Polynesian rather than based on its own merits. Like any artist, they sought to have their work seen for its particular content and argument rather than for its expression of “Pacific Islandness.”

Bottled Ocean started out as a survey of New Zealand migrant art and evolved into a show that drew attention to the underlying concerns of cultural stereotypes seen in the arts and heritage sector and the expectations of the othering of contemporary Pacific Island artists and their works.

The exhibition was the brainchild of curator Jim Vivieaere, who sought to show the works of New Zealand artists without being restricted by the expectations of the art looking “Polynesian.” The thought process behind the name, Vivieaere says, was to problematize the idea of “Pacific Islandness” and the desire to bottle it. The Oceania exhibition started at Wellington’s City Gallery and toured in several other exhibition spaces around New Zealand.

Vivieaere chose twenty-three artists of various mediums, many of whom had their pieces acquired by national museums and galleries. Michel Tuffrey, an artist of Samoan, Tahitian, and Cook Islands descent, created Corned Beef 2000 to comment on the effect of colonial economies on Pacific peoples. The piece is now part of Te Papa’s collection. Professor Peter Brunt, who attended the show, viewed it as “the arrival of contemporary Pacific art to mainstream galleries.” This exhibition brought contemporary Pacific art to the forefront of the international art market and made the public aware of the backhanded privilege; of being pigeonholed to create a certain kind of art that limits creativity.

Exhibiting indigenous material today is a fraught undertaking, but the outcome through decolonization methodologies and acknowledgment of tensions can ultimately lead to mutual recognition and understanding. One such method is challenging Western museum practice and acknowledging the different kinds of expertise and connections between people and objects.

Pasifika Styles met that challenge head-on. Pasifika Styles, the first major exhibition of contemporary Pacific art in the UK, was the product of a collaboration between University of Cambridge curator Amiria Henare and New Zealand-Samoan artist Rosanna Raymond.

The exhibition brought in contemporary Pacific artists to install their artwork next to treasures collected on the voyages of Cook and Vancouver, as well as to create art in response to the treasures in the collection. It not only showed Pacific art for its own merit but also demonstrated how some Pacific artists’ practice is rooted in traditional methods.

The art made in response to the collections raised questions on cultural ownership, restitution, and decolonization. Jason Hall’s work The Do-it-yourself Repatriation Kit questions the museum’s right to hold cultural heritage. The kit is made up of a suitcase with London airport tags with an inner foam lining in the case carved out for a tiki ornament and a hammer. However, only the hammer remains.

This thoughtful exhibition conveys the importance of reconnecting treasures with their living descendants and generating new connections between museums and their treasures. Treasures themselves can be important sources about its history and historical techniques, so it served as a learning opportunity for museum professionals from the artists, who have expertise from inherent knowledge. It also allowed artists to research the museum’s collections to inform their artwork and bring the information back to the Pacific Islands to inform traditional Pacific art practices.

The Oceania exhibition was a success, resulting in a two-year program celebrating Pacific Island artists and their collaboration with the Cambridge museums with visiting artist programs, museum seminars, and workshops, partnering with local schools to engage with audiences unfamiliar with Pacific cultures. The outcome of the exhibition was true reciprocity of education. The exhibition space became a forum for the renewal of political debates, raising questions on Western museum practice concerning Oceania material, reflections of assumptions about creativity, and decolonization.

By Selena McGonnellMSc Museum Studies, BS HistorySelena is a contributing writer and museologist from the United States. She holds an MSc in Museum Studies from the University of Glasgow, and a BS in History. She has a passion for museums and heritage with research interests in collections of colonial context, curatorial practices, art provenance, and British history.

18 Free Online Museum Tours To Enjoy Without Leaving Your Couch

Anti-Colonial Activist Fined For Taking Artwork From A Paris Museum