Nestled in Houston’s bustling Midtown neighborhood, the Menil Collection’s exhibits and shady green are a favorite spot for locals and tourists alike. 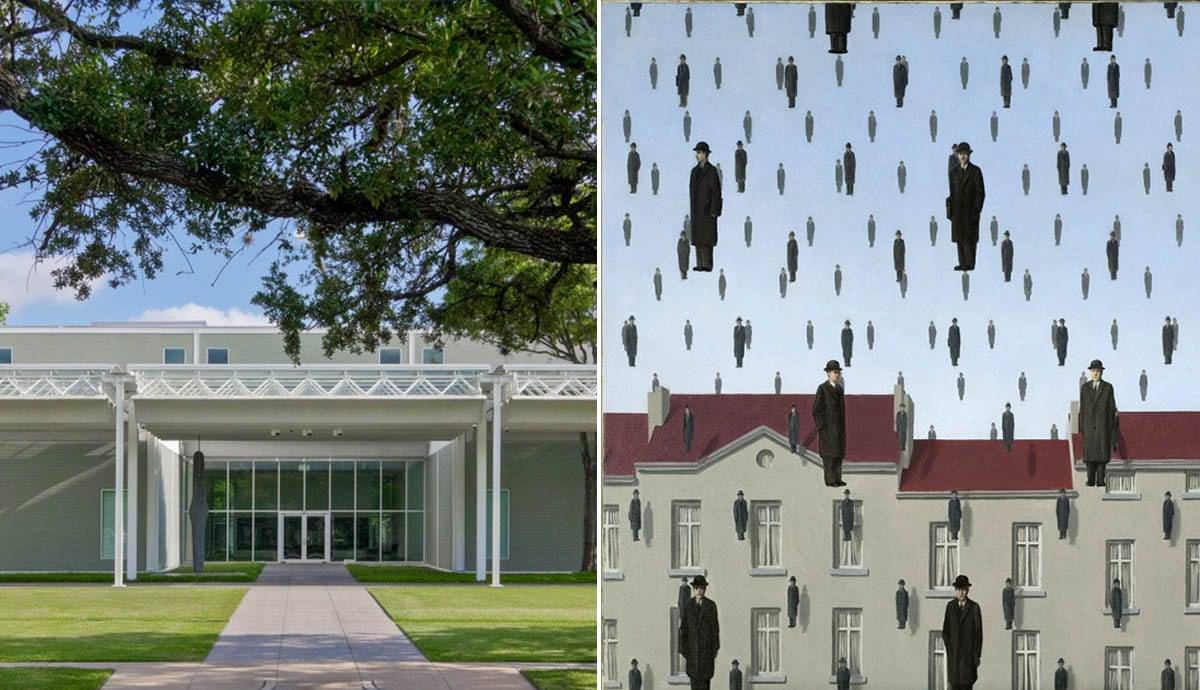 The exhibit halls of the Menil Collection are always free to visit, as are its park filled with sprawling trees and the reverential Rothko Chapel. Its grounds are also home to Bistro Menil and a bookstore, which are separate from the main museum building. Most of the exhibits feature the formerly-private collection of the museum’s founders, John and Dominique de Menil, who engaged a wide variety of architects to create the buildings of the Menil Collection, including Renzo Piano, Francois de Menil, Philip Johnson, Howard Barnstone, and Eugene Aubry.

About John and Dominique de Menil and the Menil Collection

John de Menil was born into a French baronhood in 1904, and his wife, Dominique, was the heiress of the Schlumberger company fortune. John would later become the president of that company. They married in 1931and emigrated to the United States at the outset of World War II. When they arrived in Houston, they hired Philip Johnson to design their new home in the city’s wealthy River Oaks neighborhood. Around the same time, they began seriously collecting art. After John died in 1973, Dominique set about deciding the future of their extensive art collection, and she landed on giving it its own dedicated museum.

While the chapel is technically not affiliated with the Menil Collection, it is located only a few blocks away and was also created by the de Menil’s. Because of this, it is considered by the public to be part of the Menil experience– and what an experience it is. It contains 14 enormous paintings by American artist Mark Rothko, who was commissioned to create them for the space in 1964. The paintings are different shades of black and near-black that, upon close inspection, also contain vibrant purples and blues. The octagonal building was carefully constructed to showcase these paintings, but conflicts between the artist and various architects enlisted to work on the project delayed completion until 1971, a year after Rothko’s suicide. Today, the chapel is one of the most unique religious destinations in the world, with a spiritual energy not tied to any particular faith.

In another building on the Menil Collection campus, there is an homage to the works of Cy Twombly (1928-2011), an American painter and sculptor known for his large calligraphic works. The artist’s creations not only fill the space but also influenced the architecture itself. The architect Renzo Piano designed the building inspired a sketch made by Twombly. He also chose where in the building his works would be placed. Piano added soft natural light to the gallery with intricate layers of skylight, sailcloth, and a steel canopy. In addition to the artwork, the space is outfitted with a complex sound system that plays site-specific audio installations.

A fascinating structure, the Byzantine Fresco Chapel was designed by architect Francois de Menil and completed in 1997. The building sports an internal courtyard, water feature, and unique cubist design. Originally it housed two 13th-century frescoes that were stolen from a church in Lysi, Cyprus. The de Menil’s purchased these frescoes on behalf of the Holy Archbishopric of Cyprus, funded their restoration, and housed them inside the chapel until they were returned to their home country in 2012. Now, the chapel houses long-term installations, although it has been temporarily closed to the public since 2018.

4. The Cabinet of Curiosities

Within the Menil’s extensive Surrealist collection, the museum boasts its own cabinet of curiosities, or Wunderkammer, called “Witness to a Surrealist Vision.” The room houses over 150 objects curated by anthropologist Edmund Carpenter and former Menil Collection director Paul Winkler. Most of these objects, including ritual attire, everyday objects, decorations, and much more, come from various indigenous peoples of the Americas and the Pacific. As disparate as their arts might seem, Surrealists took inspiration from indigenous art, seeing these items as proof of their own creations’ universality. While the connections between these items and the Surrealists are interesting, the room itself is an overwhelming spectacle, and the more you look around you, the more you’ll relate to Alice’s sentiment: “Curiouser and curiouser!”

The Menil Collection boasts an impressive number of Surrealist and Dadaist works, including several well-known pieces by René Magritte and Salvador Dalí. The collection also features many pieces by Victor Brauner and Max Ernst, including a portrait of Dominique de Menil by the latter. In addition to paintings, the collection includes sculptures and photographs by the likes of Hans Bellmer and Henri Cartier-Bresson. Fans of Ernst or Magritte would be foolhardy to miss such an extensive permanent exhibition of those artists’ works.

The modern and contemporary art offerings at the Menil Collection range from works by Andy Warhol, like the portrait of Dominique de Menil pictured above, to pieces by Pablo Picasso, Jackson Pollock, Piet Mondrian, and everything in between. Not only is this era represented inside the main gallery building, but also outdoors, where the lawn displays sculptures by Mark di Suvero and Tony Smith. A few standouts are one of Warhol’s Campbell’s Soup cans, abstract pieces by Mark Rothko, and several pieces by Pablo Picasso. The collection also features works created by living 21st-century artists.

7. Indigenous Art in the Menil Collection

While the Menil has an extensive trove of African art and objects, its most unique indigenous collection is its art and objects from the native peoples of the Pacific Northwest. These items range in time from circa 1200 B.C to the mid-20th century and represent a wide variety of native tribes. Combined with the African collection, the Menil is home to a vast array of indigenous art that intrigues any anthropologically-minded art enthusiasts.

Be sure to visit the Menil Collection’s website before planning a trip to the museum, as some buildings are currently closed for renovations. There you can also find a list of current temporary exhibitions. In the spring of 2020, these include exhibitions on Brice Marden’s drawings, Surrealist photography, and an installation by Dan Flavin. Later offerings this year are works by Puerto-Rican duo Allora & Calzadilla and Virginia Jaramillo’s curvilinear paintings.