René François Ghislain Magritte is perhaps best known in the popular zeitgeist for his 1929 painting The Treachery of Images, which depicts a pipe and the words “Ceci n’est pas une pipe,” French for “This is not a pipe.” 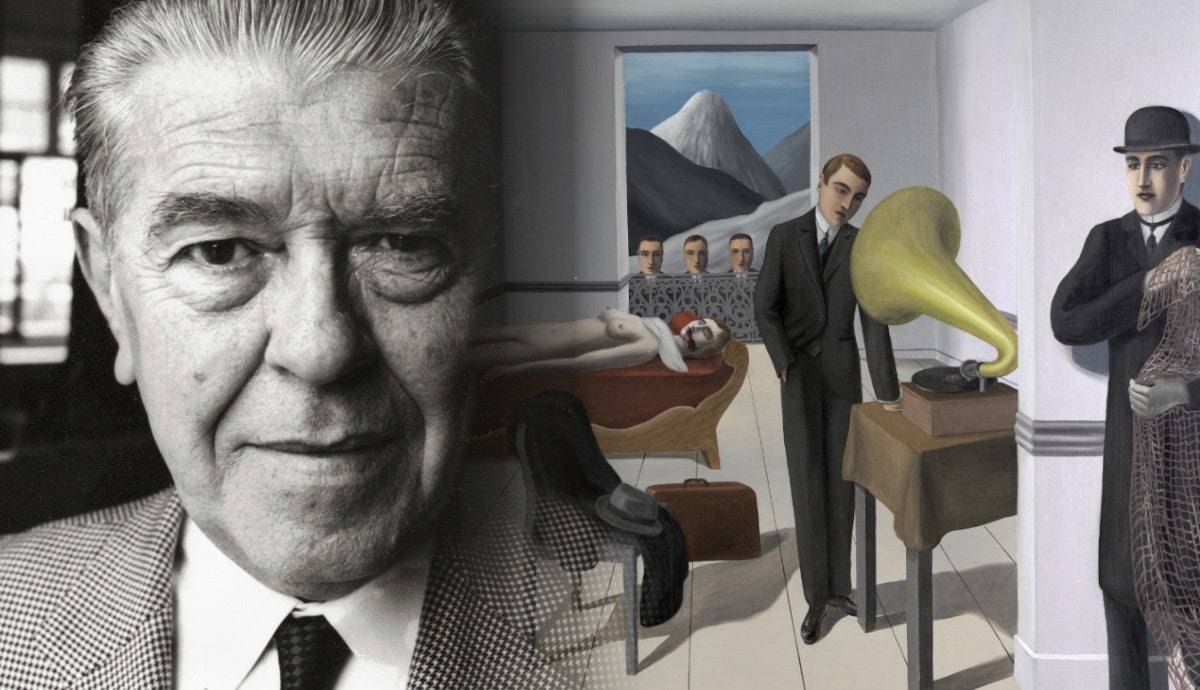 René François Ghislain Magritte is perhaps best known in the popular zeitgeist for his 1929 painting The Treachery of Images, which depicts a pipe and the words “Ceci n’est pas une pipe,” French for “This is not a pipe.” Although this painting, housed at the Los Angeles County Museum of Art, is arguably his most famous, fans of Surrealist art will recognize his many paintings that feature men in bowler hats and suits, as well as his poignant style of introducing the surreal into the everyday via windows and doors that open to impossible views.

Born in 1898 in Brussels, Magritte found an art world consumed largely by Impressionism, a style that he used in his earliest paintings. Unlike many prominent artists, he began studying art in his youth at the age of 11. His childhood was impacted by the suicide of his mother when Magritte was only 13. Beginning in 1916, Magritte studied at the Académie Royale des Beaux-Arts in Brussels, but he only studied there for two years. After leaving the institution, he developed a more Futurist and Cubist approach to his art. In 1922, Magritte married Georgette Berger, whom he had known as a child and later met again in their young adulthood. She had also studied art.

In addition to his working on his paintings, Magritte also held jobs as a wallpaper draftsman and as an advertisement designer in the early 1920’s. In 1922, Magritte’s friend showed him Giorgio de Chirico’s metaphysical painting The Song of Love, which moved Magritte to tears. The style is reminiscent of Magritte’s Surrealist works, and the impact this painting had on his creations seems clear. Fortunately for him and for the generations of art lovers who admire his works, Galerie Le Centaure awarded Magritte a contract in 1926 that allowed him to devote all his time to painting. The same year, he made his first Surrealist painting, Le jockey perdu, and held his first solo exhibition, which was widely panned by critics. One painting included in this show was The Menaced Assassin, a work that has since become one of the artist’s most well-known.

After this depressing experience, Magritte moved to Paris, where he fell in with the local Surrealists, including André Breton, Salvador Dalí, and Max Ernst. At this time, the stated goal of the Surrealists was to leave behind the restricted, conscious mind and allow the subconscious to roam free. This movement was probably inspired at least in part by Sigmund Freud’s psychoanalysis, which had achieved significant popularity by this time. Interestingly, one of Magritte’s developments in Paris was his decidedly not subconscious word-paintings, which used both images and written texts to explore ideas of representation. Perhaps the most famous of these is The Palace of Curtains, III, featuring a frame containing a blue expanse of sky and another frame with the word “ciel,” or “sky” in French.

In 1929, Galerie Le Centaure closed, and Magritte’s contract ended. In need of a steady income, the artist returned to Brussels and resumed his work in advertising. He also began his on-again, off-again relationship with the Communist Party at this time. Additionally, his marriage fell on hard times, with first Magritte, then his wife, beginning affairs. The relationship was not repaired until 1940. He held his first solo exhibitions in New York and London in 1936 and 1938, respectively. During these years, the painter also had a professional relationship with patron Edward James, who is known for his support of Surrealist artists.

Journeys Outside of Surrealism

Magritte stayed in Brussels during the German occupation, which led to his so-called Renoir or Sunlit Period from 1943 to 1946. These paintings feature Impressionist-style visible brushstrokes, bright colors, and uplifting subjects, such as The First Day and The Harvest. Magritte produced these lively paintings to combat the bleak political climate as well as his own personal unhappiness. In 1946, he signed Surrealism in Full Sunlight, a manifesto that rejected the pessimism of earlier Surrealist works and advocated for producing charming pieces instead.

The following year, Magritte began his Vache Period, or Cow Period. The word “cow” has connotations of vulgarity or coarseness in French, and the paintings from this period reflect this. The colors are vivid and striking, and the subjects are often grotesque. These works lack the refinement and attention to detail seen in many of Magritte’s most famous paintings. Some of them also feature the large brushstrokes the artist used in his Renoir Period. During the postwar years, Magritte also supported himself by producing fake works by Picasso, Braque, and de Chirico, as well as fake paper currency. In 1948, Magritte returned to his prewar style of Surrealist art that is so well-known today.

Of his works, he said, “When one sees one of my pictures, one asks oneself this simple question, ‘What does that mean?’ It does not mean anything, because mystery means nothing either; it is unknowable.” In 2009, the Magritte Museum opened in Brussels; it showcases about 200 works by Magritte. The city of Brussels honored the artist’s legacy by naming one of its streets Ceci n’est pas une rue.

Barbara Kruger: Politics and Power
By Rosie Lesso, in Artists
What Type of Artist Was Pierre-Auguste Cot?
By Idalis Love, in Artists