Max Ernst's Une Semaine de Bonté consists of five surrealist collage pamphlets. Divided into seven parts, one for each day of the week, the visual novel is a masterpiece. 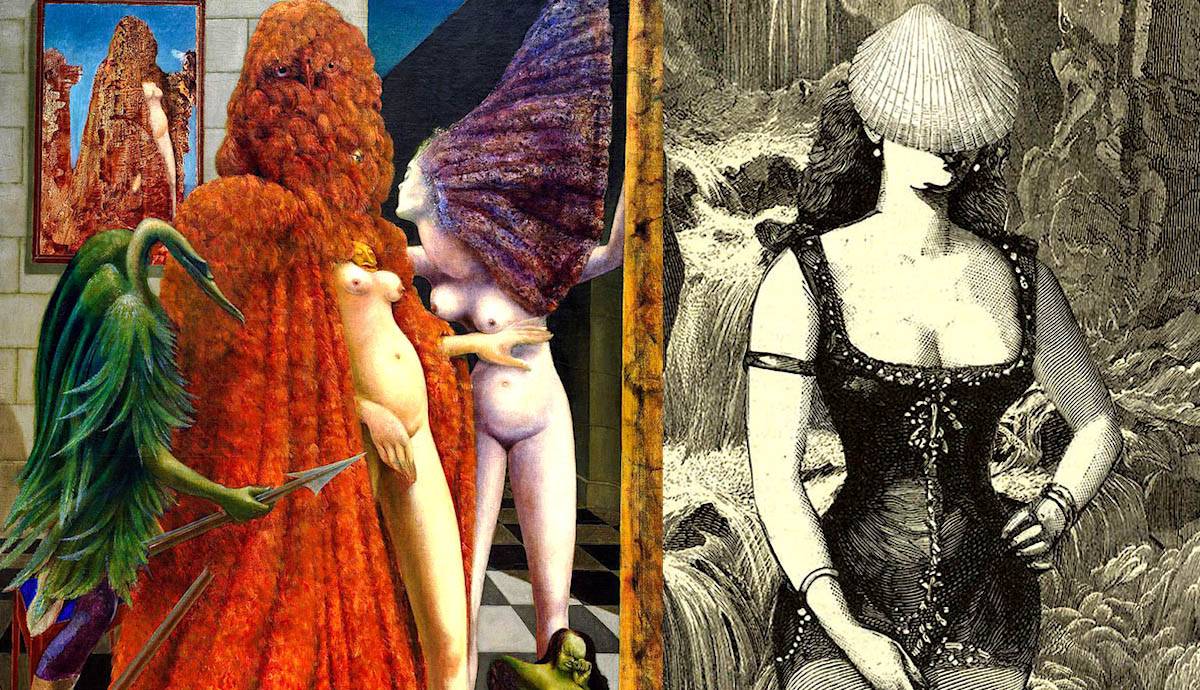 German surrealist painter Max Ernst was born on April 2nd, 1891, in the German city of Brühl. He is a pioneer of two important art movements, Dada and Surrealism. The artist also worked in the fields of poetry, sculpture, and graphic art. Throughout his career, Ernst expressed himself through different mediums, including painting, collage, and printmaking. After he spent four years fighting in World War I, Ernst returned to Cologne in 1918, where he started crafting his first collages. During this period, he used mechanically reproduced fragments and began associating his creations with the surrealist movement.

Surrealism was an artistic and literary movement that took place mainly in Paris during the 1920s. Supporters of the movement promoted aspects of the irrational and the unconscious over order and reason. Max Ernst made an influential contribution to the surrealist movement by introducing the technique of frottage. The method consisted of placing paper over a textured material and rubbing it with a pencil or a crayon.

The surrealists praised his invention. Ernst also translated the method from paper to paint, a process he called grattage. The new technique practiced scraping wet paint from the canvas, which resulted in similar patterned effects. It’s no wonder that the surrealist painter found his primary inspiration in the fragmented logic of the collage technique, as it represented the culture of systematic displacement. The subjects in his works are frequently disjointed, with headless bodies appearing amid the wilderness of the forests or laying on deserted beaches.

Max Ernst’s signature experimental attitude towards artistic expression is partially due to his lack of formal training. Perhaps this absence of educational rules is what preserved his uncompromising creative freedom. Nowadays, the surrealist painter remains widely known for his revolutionary collages, including The Hundred Headless Woman and A Little Girl Dreams of Taking the Veil.

In the summer of 1933, Max Ernst stayed in Vigoleno, located in the north of Italy. He was in the company of the French artist Valentine Hugo, the Italian poet Gabrielle D’Annunzio, the classical pianist Arthur Rubinstein, and many more. For three weeks, the surrealist painter gathered a collection of various novels and started cutting out intriguing illustrations. He collected drawings from Gustave Doré‘s Illustrations for John Milton’s epic poem Paradise Lost, engravings from fashion magazines, and pictures from popular 19th-century novels.

Finally, Ernst crafted his third collage novel, Une Semaine de Bonté or A Week of Kindness. Previously, he published the graphic novels Misfortunes of the Immortals in 1922, The Hundred Headless Woman in 1929, and A Little Girl Dreams of Taking the Veil in 1930. The surrealist painter had initially planned to publish A Week of Kindness in the format of seven notebooks, each one representing a day of the week. In the end, the last three days (Thursday, Friday, and Saturday) were brought together in the fifth and final volume.

The full title of the novel reads as A Week of Kindness or the Seven Deadly Elements. The title also refers to the seven days of creation according to the Book of Genesis. Each part of the novel is distinct by its specific day, example, and element. Additionally, the surrealist painter set the tone for each chapter by inserting quotations on each title page, allowing the reader to interpret the novel more freely.

The collages were exhibited only twice in their entirety, once in 1936 at the National Modern Art Museum in Madrid and over 70 years later at the Orsay Museum in Paris in 2009. The novel was first published in Paris as a series of five pamphlets through a publisher, Éditions Jeanne Bucher. With its 182 striking images, A Week of Kindness continues to stand out as Max Ernst’s most elaborate collage novel artwork, gathering new admirers almost 90 years after its creation.

Volume I, The Lion of Belfort: Sunday

Max Ernst breaks away from the timeline in the Book of Genesis and starts his week with Sunday. The novel opens with a quote from a French writer Alfred Jarry: “The ermine is a very dirty animal. In itself, it is a precious bedsheet, but as it has no change of linen, it does its laundry with its tongue.” It alludes to the fact that the ermine’s fur was the material used to create ceremonial robes. Therefore, the animal represents a symbol of royalty. The quote implies that the prudish impression of the ruling class is only a façade designed to mask their vile actions and shameful desires.

The element of mud that rules the first book ties in with this context, as it represents being filthy and impure. The Lion of Belfort symbolizes the ruling class and the social elite, corrupted and eaten away by lust and pride. As the pages turn, the violence slowly unravels, and the grotesque begins. A variety of snakes, skulls, and weapons represent the main symbolic elements. Among the frightening lions, we see helpless women being terrorized and tortured. A vicious game of domination plays out before us as the surrealist painter torments his characters with suppressed erotic desires, blasphemy, and death.

Volume II: The Colour of Water

Monday, the second book of A Week of Kindness, represents the element of water. The epigraph presents us with an enigmatic statement explored throughout the second volume of the novel. By using his collages, Max Ernst depicted various characteristics of water. It can be calm and cleansing yet, in contrast, turbulent and merciless. Since the novel is in black and white, ultimately, the color of the water is left to our imagination. The atmosphere is once again filled with violence, fear, and death. We see monuments in Paris being washed away by waves. Uncontrolled water flows by the foot of the beds on which lie the sleeping Parisians. We see some people struggling to escape while others surrender to their fates.

Female bodies embraced by the rippling waters represent a frequent motif. We see a woman falling asleep in her bed, shrouded with crashing waves. Another woman has her feet washed by a maid while a man is drowning below her. The surrealist painter shows complete control in depicting these bodies, maneuvering their positions and mannerisms, evoking ambiguity, and eroticism. He creates a strange blend of both serenity and chaos, denying us a sensible meaning once again.

Volume III: The Hidden Desires of the Bourgeoisie

The element of fire rules the third book that represents Tuesday. Fire represents the flames of lust. Volume III: The Court of the Dragon introduces readers to the tragedies of the bourgeois hell. Fire serves as a direct opposite of the natural force of water found in the previous book. The surrealist painter presents us with wicked dreams, fears, and hidden desires of the bourgeoisie. These pages show strong feelings of internal disorder, hypocrisy, and ethical struggles.

Throughout the volume, unsettling symbols are hidden in details. Picture frames in the background discreetly display peculiar images, pistols fire at unseen targets, and reptiles lurk in the shadows. People’s backs are carrying dragon and angel wings, embodying their true inner spirits. In the darkest chapter of his novel, Max Ernst shows us the worst demons of the upper class.

Volume IV, Wednesday: The Blood and Wrath of Oedipus

The book that represents Wednesday tells the tale of Oedipus. Max Ernst opens the fourth volume with a quote from Paul Eluard which alludes to the fact that, according to the myth, Oedipus unknowingly married his mother. In this chapter, Oedipus stands as an example of the element of blood. Oedipus sheds his father’s blood, and the incestuous line flows through the veins of his children. In this book volume, Ernst depicts the mythical character with a bird’s head. Using his collages, Ernst explores Oedipus’ tragedy, including the murder of Laius and the Sphinx’s riddle. In this particular volume, we see the war between the natural and unnatural.

The final book, covering the remaining three days (Thursday, Friday, Saturday) is defined by the element of blackness. Thursday’s lead figure is a cockerel who guides us through a series of sadistic misadventures. The intensity of the images reminds us of the constant presence of death. Anthropomorphic birds are a frequent motif in Max Ernst’s work and this volume is no exception. Ernst even had a winged alter-ego called Loplop that was often featured in his visual novels.

Another story connected with Thursday in Volume V is Easter Island. The story is centered around a man that has the head of an Easter Island statue. This character represents morality. Eventually, he succumbs to his desires, stumbling across the alleys, desperately avoiding women. He begins seeking refuge in a tavern, where he finds himself in the company of drunk people while the upper-class gentlemen are walking the streets with sex workers behind them. In the end, the main figure breaks down in a dark cellar, standing next to skeletal remains.

Friday shows the element of sight. It also contains Three Visible Poems written by Paul Eluard, Andre Breton, and Petrus Borel. Friday offers emblematic pictures following eventful scenes from the previous book. Certain pages show that Ernst was using a method of synthetic collage that he frequently explored at the beginning of his career.

Saturday represents the conclusion of A Week of Kindness. The key element is unknown this time. In this final section, women are leaving their beds in a trance, finally freed from torment. They are flying towards the heavens, smitten, carried by clouds and the wind.