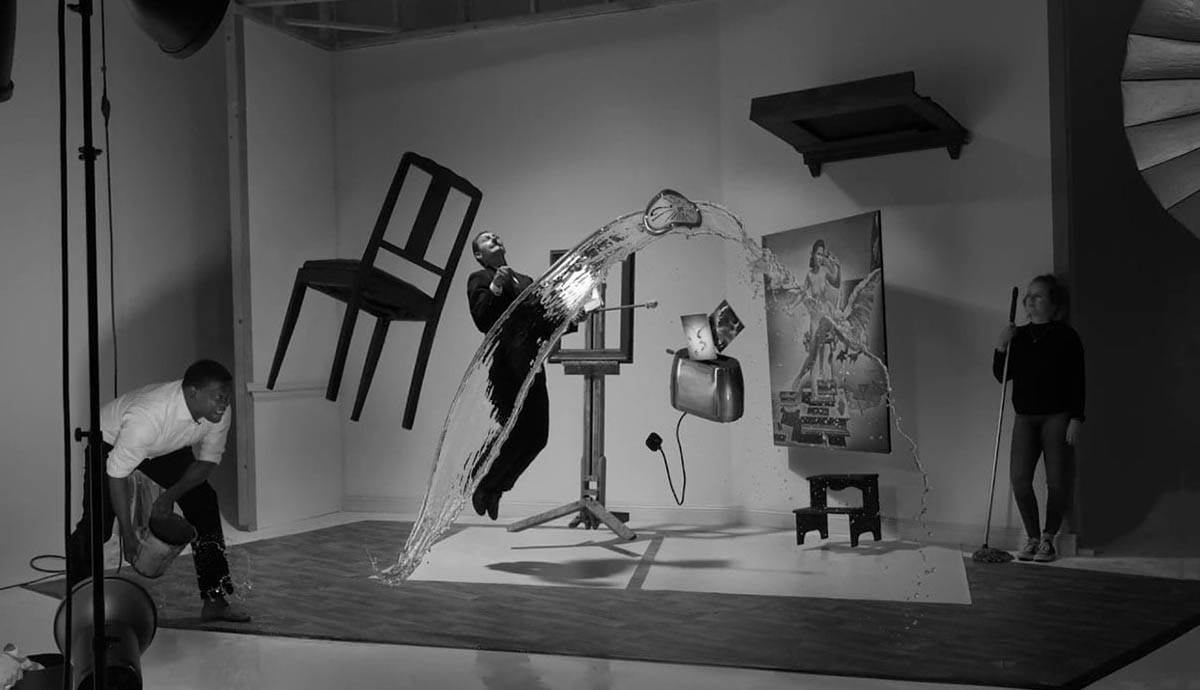 Photography as a medium wasn’t seen as essentially artistic until around the 1930s and 40s. Before surrealist photographers like Philippe Halsman began to emerge, photography was used as a documentary and journalistic tool.

The most famous and widely renowned photos were ones of celebrities or important moments in time. Photography was also used as a tool for scientific experimentation, as with the famous photo The Horse in Motion by Eadweard Muybridge, which was a study of motion conducted in 1878. When artists like Man Ray, Lee Miller, and Dora Marr to name a few began to take an interest in photography as a vessel for expression rather than documentation, surrealist photography was born.

With the recent development of photo editing software such as Photoshop and Gimp, abstract and surrealist photography has become relatively easy to achieve. Creating a surrealist image is attainable through a couple of clicks and adjustments on a laptop. But when Surrealist photography emerged as an artistic style, creating disorienting, unusual images wasn’t so simple.

Surrealist photographs took a lot of time, effort, and rolls of film. Photographers used methods like double exposure, solarization, and combination printing in the darkroom to make their images otherworldly and slightly unnerving. These early experimentation tactics led to later photography movements, like pictorialism, abstract photography, and street photography. While photography was and is to this day, used as a tool by the general population, the birth of surrealist photography has made way for those who wanted to use the medium to express themselves rather than immortalize a scene.

One of the key players in this movement was Philippe Halsman. Although he wasn’t particularly a surrealist photographer, his contributions to the movement led to some of the most famous surrealist photos of the time. He embodied characteristics of the surrealism movement in his work such as distorted perception, dreamlike portraiture, and unexpected angles. His partnerships with other surrealist artists like Salvador Dali are still celebrated to this day.

Halsman had always been an artist who worked outside the box, even as an amateur photographer. His photography career began in Paris, where he became well known and highly celebrated for his portraits. He experimented with light frequently, using different types of dramatic shadow or intense highlighting to characterize his subject. He also became known for the sharpness of his portraits, which differed greatly from the common soft-focus portraits of the time.

As Paris fell during World War II, Philippe Halsman fled to America, where he settled in New York City with his wife and two children. He was relatively unknown in the US at this point and had to build his photography career from the bottom up yet again. He got his one lucky chance when he photographed aspiring model Connie Ford. On a whim, he decided to photograph Ford lying on an American flag and captured an image that would be used in a patriotic-themed commercial campaign by beauty behemoth Elizabeth Arden.

After Elizabeth Arden’s “Victory Red” lipstick campaign was released, Halsman’s American career took off. He continued to work on assignments for LIFE Magazine, shooting cover after cover for the iconic publication.

Throughout the late 30s and early 40s, Halsman continued to photograph famous artists, writers, actors, and public figures. He first met Salvador Dali in 1941, when he was commissioned to photograph some costumes Dali designed for the Ballets Russes production of “Labyrinth.” Halsman’s resulting photograph, of the ballerinas in costume silhouetted by Rockefeller Center, had the same surreal, strange essence as Dali’s paintings, and led to a 37-year long creative relationship between the two men.

Their time spent working together resulted in multiple iconic images, especially Dali Atomicus. Halsman was inspired to make Dali Atomicus after dissecting Dali’s painting titled Leda Atomica. He wanted to take a portrait of Dali that was a moment suspended in time, and suspended in mid-air. To create the scene, he used thin, nearly invisible wire to suspend Dali’s easel, a stool and the painting Leda Atomica in the air. His wife held a chair up just to the left of the frame, to add to the illusion of a lack of gravity.

Then, he had assistants throw three cats and a bucket of water in the air and simultaneously asked Dali to jump. Just as the water, the cats, and the painter were in motion, he hit the shutter. It took 26 takes to get the photo just right. Dali then painted a tiny surrealist motif to fit into the easel on the final photo itself.

This photograph is one of the most influential surrealist portraits and serves as inspiration for many photographers. It challenged the photography world to be more physical in their expression and execution, rather than making their artistic adjustments while holed up in the darkroom. This photo inspired Philippe Halsman himself as well. After taking this photo, he continued to make his subject jump in their portraits, resulting in the infamous photos of Audrey Hepburn, Marilyn Monroe, and the Duke and Duchess of Windsor suspended in mid-air.

In 1949, Halsman received an assignment from LIFE Magazine to photograph Jean Cocteau, a French artist, playwright, and avant-garde figurehead. The assignment was to create a photo series representing what goes on inside the poet’s mind. Cocteau was in the midst of releasing The Eagle With Two Heads, his third film, and the LIFE Magazine series would serve as promotion for the new avant-garde cinema experience.

The quirky artist was notorious for filling his films and plays with allusions to other famous works. Halsman wanted to mimic this with his portraits of the artist by packing them with references to Cocteau’s own work. The photographer employed the use of two models, Leo Coleman and Enrica Soma, along with a conglomeration of random props such as a live boa constrictor, trained doves, and a plastic anatomical model of a man to encapture his vision of the artist.

Each photo that Halsman took for the series was a reflection of one of Cocteau’s own works. For example, one of the photos shows Cocteau slinking down a dimly lit hallway, arms raised as if delivering a soliloquy, as other arms reach out from the walls, copying his pose. This photo is a reflection of a scene Cocteau’s Beauty and the Beast, where Belle runs down a dark corridor that is lit by candelabras held by floating arms. Another photo shows Cocteau and model Coleman seemingly suspended in mid-air, about to touch hands, a la Adam and God in the Sistine Chapel.

The pair are staged around a mirror, a lamp, a table, a chair, and a massive clock, adding even more to the illusion that they are floating along the side of a wall. A third photo, and Cocteau’s personal favorite of the series, was a simple, dramatically lit mirrored image of the avant-garde artist’s face: the left face glancing to the side, the right with eyes pensively closed. The photo was a simple composite of two negatives cut and developed together to create a single image. Cocteau went on to use a drawing he created of the photo as his personal signature.

Salvador Dali: The life and work of an Icon

One of the most recognized photos in the series was not published in the magazine. The image shows Cocteau wearing a suit jacket backward, while he seemingly smokes, reads, and brandishes scissors all at the same time, with 6 arms. This photo is the epitome of surrealism: taking a seemingly ordinary scene and adding an element of bizarre surprise. It was titled simply, as most of the photos in the series were, as Jean Cocteau. The photos that Halsman took of Cocteau that day in his tiny studio solidified his reputation as a spirited photographer and member of the surrealist movement.

Philippe Halsman’s contributions to the photography community are numerous and substantial, and the majority of them aren’t related to surrealist photography at all. Halsman shot 101 covers for LIFE Magazine, a staggering amount for any photographer at the time. He was dedicated to the process of portraiture, and the relationship between photographer and subject.

Rather than shoot his subject in a neutral sitting or standing position, he engaged with them and asked them questions to bring out their true personality. He asked them to make faces, to jump, to dance. He made them laugh or brought raw emotion out of them to get a more candid, personal photo. This technique changed the way future photographers looked at portraiture, especially of celebrities. Other photographers began to make an effort to take a distinctive photo that embodied their subject, rather than a simple headshot.

Although not his magnum opus, his photos of Dali and Cocteau, but especially Dali, played a large part in distinguishing the surrealist art movement from the philosophical movement. The two go hand in hand in theory, but Halsman helped show that the movement could bring about revolutionary photography practices and pragmatic ideas as well as whimsicality and playfulness.

In some ways, Halsman went against the tenets of surrealism by bringing a practical approach to a nuanced movement. But the results of his efforts led to a wider acceptance and understanding of the movement than before. Halsman’s dedication to experimentation and thinking outside the box led him to be one of the most influential photographers of the decade.

By Jenna RossBA PhotojournalismJenna Ross is a contributing journalist and photographer with an extensive interest in the history of photography and art. She has a BA in Photojournalism from California State University, Fullerton. When she isn’t working, she loves to travel, and always takes her camera along with her.