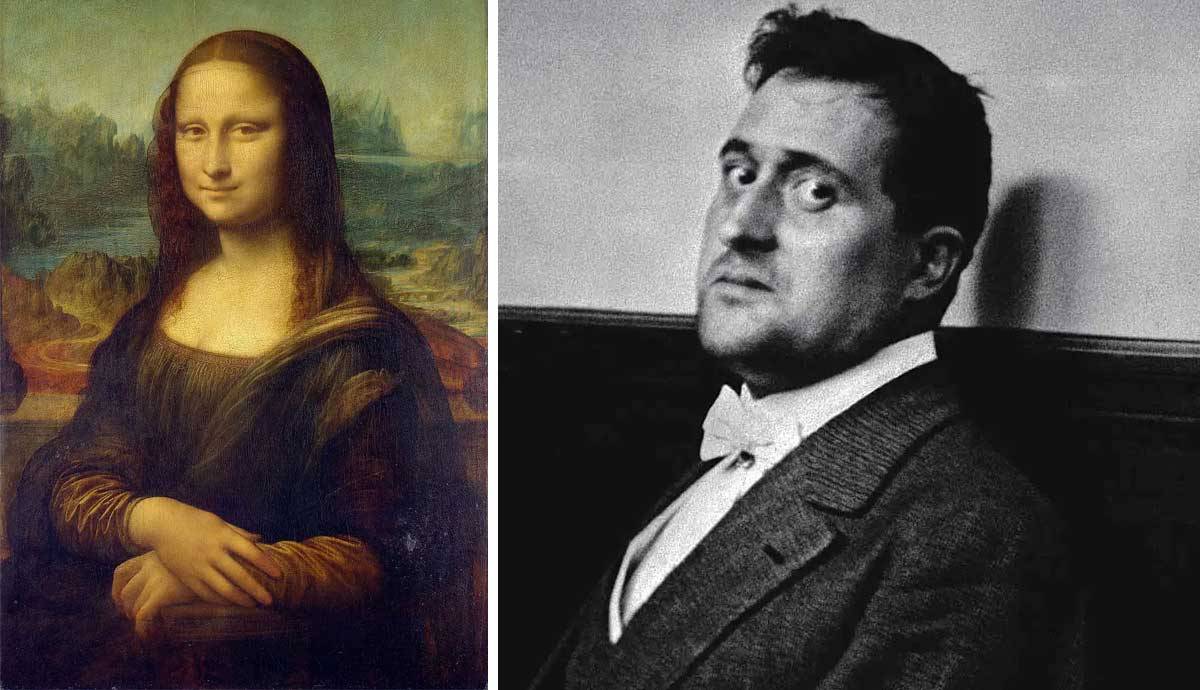 Guillaume Apollinaire was a writer of extraordinary talent, creating some of the most important poetry, art criticism and literature of the entire 20th century. He was also a lively and outspoken socialite, making himself well-known across the Parisian art circles he frequented, and befriending a huge range of artists from all walks of life. In a bizarre turn of events, in 1911 French police arrested Apollinaire for stealing the most famous painting in the world – Leonardo da Vinci’s Mona Lisa, 1503, – from the Louvre in Paris. They even kept him in prison for a week! How did this unlikely turn of events take place, and did he really steal the Mona Lisa?

There’s no denying that an art theft took place on the 22nd of August 1911. Someone stole Leonardo da Vinci’s iconic masterpiece the Mona Lisa, 1503, from the Louvre in Paris, right under the noses of the security guards. The museum closed for a full week, and fired several members of staff. Widespread panic followed as French police hunted high and low for the missing priceless artwork, closing French borders and trawling through every nearby ship and train. Police even issued a reward of 25,000 francs for anyone who could find the missing artwork, and the international press went wild.

On the 7th of September 1911, French Police arrested the then 31-year-old Apollinaire, believing he was involved in the art heist. But how did he become a suspect? French authorities already viewed Apollinaire with some suspicion. He was an Italian immigrant of Polish descent living on French soil. Plus his radical, avant-garde views about art and culture had made him quite famous. But it was Apollinaire’s unlikely friendship with the light-fingered Joseph Gery Pieret that aroused the most suspicion. Pieret was a troublemaker who had developed a habit of pocketing small items from the Louvre, at a time when security was surprisingly low. At around the same time as the Mona Lisa theft, Pieret stole two Iberian busts and gave them to Apollinaire and Pablo Picasso. When Apollinaire tried to discreetly return the busts to the Louvre, the authorities immediately arrested him.

3. Apollinaire and His Friends Were “The Wild Men of Paris”

Apollinaire and his fellow bohemians were well-known as the ‘wild men of Paris’, so it seemed entirely possible to the French authorities that they could be a band of art thieves who had masterminded an art theft. As it happens, Picasso had recently bought the stolen sculptures from Pieret, although it’s not clear whether he knew that Pieret had pilfered them from the Louvre. Picasso had recently developed a particular taste for Iberian art, as seen in the mask-like faces of his artworks during this time. But when he heard the police were onto him, Picasso was so reportedly distressed that he nearly threw the sculptures in the Seine.

Apollinaire confessed the entire story about the stolen busts to the French authorities. After holding him for a week, police released Apollinaire due to insufficient evidence connecting him to the Mona Lisa theft. While the writer found the experience of being in prison deeply distressing, he wrote a poem about it, titled A la Prison de la Sante, (published in the poetry volume Alcools) and told friends about the kind guards, who offered him drinks of eau de nenuphar to ease his pain. Apollinaire subsequently became famous, or perhaps infamous, around the world, as his connection to the theft brought his writing under close public scrutiny.

The real culprit for the Mona Lisa theft was eventually found two years later. It turned out to be a man named Vincenzo Peruggia, a Louvre employee who had been hiding the painting in a false-bottomed trunk in Paris. In December 1913, Peruggia travelled to Florence to meet an art dealer named Alfred Geri, who he hoped would help him dispose of the unsaleable painting. Geri agreed to meet Peruggia, while secretly alerting the police, who were thankfully able to retrieve the priceless masterpiece from an otherwise unknown fate.

An Homage To Leonardo Da Vinci’s Science Of Painting