HomeArtFabulous Gilded Age Portraits You Have To See

Meet the four greats of Gilded Age portrait painters and learn why their monumental canvases are much more sophisticated than people often believe. 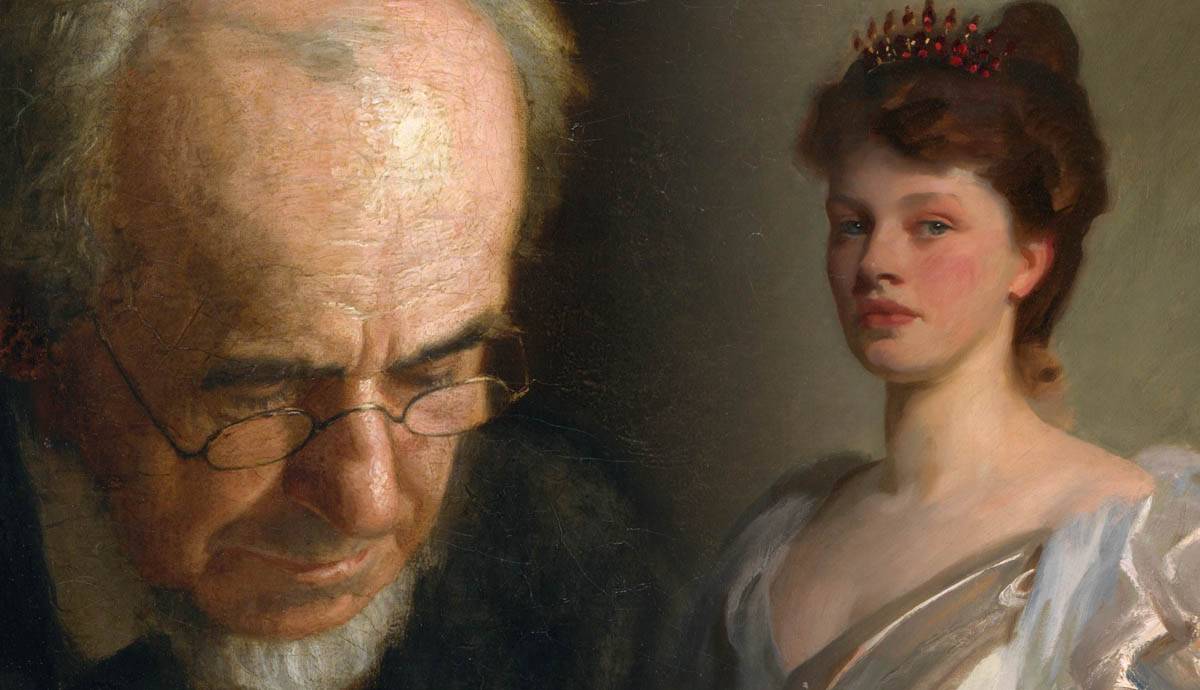 The Gilded Age was a period of industrial, financial, and cultural growth in the United States. It took place roughly between the end of the American Civil War (1865) and the beginning of World War One (1914). It was a time of big business, when tycoons like J.P. Morgan, and Henry Clay Frick made vast fortunes through highly aggressive methods. These so-called robber barons and their families were often art collectors and philanthropists on a grand scale. Accordingly, wealthy elites commissioned countless portraits from fashionable American portrait painters. Continue reading to learn more about the fascinating Gilded Age portraits.

In Defense of Gilded Age Portraits

Some later viewers have seen Gilded Age portraits as the shallow reflections of frivolous high society, with little artistic merit. Their reputation particularly suffered after Modernism came to America at the end of this period. A closer look at the paintings and artists, however, suggests a very different assessment.

The four great American portrait painters of the Gilded Age were Thomas Eakins, William Merritt Chase, Cecilia Beaux, and John Singer Sargent. The first three were influential teachers at the Pennsylvania Academy of the Fine Arts. Sargent, meanwhile, was one of the most successful international portrait painters of the period. Through direct or indirect influence, these four artists shaped subsequent generations of American artists, including many of the avant-garde figures whose reputations later eclipsed them.

All four trained in Europe, primarily in Paris, where they experienced both European academic naturalism and burgeoning French modernism. They studied the Old Masters, particularly great portraitists Anthony Van Dyck, Diego Velasquez, and Frans Hals.  These masters’ influences are readily apparent in works like Chase’s portrait of fellow painter James McNeill Whistler above. Gilded Age portraitists also found inspiration in their French modernist contemporaries Edouard Manet and the Impressionists. Most of them experimented with vivid colors and free-flowing brushwork like that of the Impressionists, though they did not share an Impressionist interest in transitory visual effects. The aesthetic vocabularies of these American portrait painters were much broader and more innovative than they usually get credit for.

The Writing Master by Thomas Eakins

Thomas Eakins (1844-1916) was dedicated to the principle of realism in art. Unique among Gilded Age portrait painters, Eakins‘s primary interest was in painting the world exactly as he saw it, both visually and psychologically. He spent several years in Paris, where he studied at the famous École des Beaux-Arts. In keeping with his French academic training, Eakins had a lifelong commitment to studying anatomy and drawing from the nude. Eakins was also an early practitioner of photography, although he seems to have considered it a tool, rather than an art form in its own right.

Upon returning to his native Philadelphia, Eakins began teaching at the Pennsylvania Academy of the Fine Arts in 1876. There, he perpetuated the tradition of drawing from nude models. He was fired from the Academy in 1886 after the then-shocking act of having a class of female students draw a completely nude male form. He spent the rest of his life in obscurity, and widespread interest in his art came only after his death.

Studying anatomy and drawing from nude models has long been considered essential artistic practice. Eakins’s interest was in no way unusual. However, his photographs of nude figures, in particular, can feel uncomfortably voyeuristic. Eakins painted portraits and genre scenes full of psychological and visual realism. His works are much less flamboyant than other Gilded Age portraits, and they often explore melancholy and isolation. However, they also give humble subjects great dignity. One such example is The Writing Master, which depicts Eakins’s father Benjamin, who was a calligrapher. It beautifully conveys patience in the older Eakins’s face and control in his hands as he painstakingly practices his craft. Eakins influenced many of the so-called Ashcan School artists, who applied vigorous realism to 20th-century urban America.

William Merritt Chase (1849-1916) is equally famous as a portrait painter and as a teacher. Future American masters like Edward Hopper and Georgia O’Keeffe spent their formative years under his tutelage in New York and Philadelphia. As a teacher, Chase is particularly noteworthy for his willingness to encourage the many women amongst his students, both in his role as a faculty member at the Pennsylvania Academy of Fine Arts and Art Students League of New York and also in the summer classes he taught in Shinnecock, Long Island. In addition to the Gilded Age portraits, Chase also painted still lifes and scenes of outdoor leisure at places like beaches and parks. Light, airy, and colorful, these works are generally considered examples of American Impressionism, though some darker-toned examples recall the Old Masters that Chase studied during his time in Munich.

As an American portrait painter, Chase did not portray the fashionable elite as often as he did other artists, members of his large family, and unidentified models in eclectic settings of his own design. His large New York studio was filled with exotic furnishings and props that he used to add interest to his compositions. Like many of his contemporaries, he was particularly taken with Japanese art and design, which often features in his works.

In contrast to his highly-curated scenes, Chase’s portrait of Lydia Field Emmett is equally striking for its simplicity and Old Master-like tone. Emmett (1866-1952) was one of his students, and she became a successful American portrait painter with an over-50-year career. Chase commonly used his students, particularly the women, as subjects for his paintings. Perhaps we can read something of Emmett’s determination to stand out from the crowd in her confident gaze towards her teacher. Chase’s works appear in major museums throughout the northeastern United States.

Man With the Cat (Henry Sturgis Drinker) by Cecilia Beaux

Cecilia Beaux (1855-1942) was one of the most successful American portrait painters of the entire Gilded Age. She was held in such high esteem during her career that she was considered a worthy rival for the internationally-famous John Singer Sargent. Beaux was also the first female professor at the Pennsylvania Academy of the Fine Arts. She had been a student at the Academy, which now owns many of her works, before studying in Paris. She was thus fully versed in the naturalism of the French academic tradition, and she was much lauded on both continents. Her sitters included intellectuals, military men, and society figures from several countries, as well as multiple U.S. Presidents and First Ladies.

Despite her illustrious lineup of clients, Beaux’s most memorable paintings depict her family. Her most iconic image shows her young niece, Ernesta Drinker, at the age of two, wearing a white dress and clutching her nurse’s hand. She also painted a striking portrait of Ernesta’s older brother, Cecil, as a four-year-old in a very impressive coat. Beaux’s numerous portraits of children portray them with sensitivity and grandeur, yet without sentimentality. A nice counterpart to the image of her young niece is Beaux’s later painting of a stylish, sophisticated Ernesta at age 22.

Man with a Cat depicts Beaux’s brother-in-law (Ernesta and Cecil’s father), Henry Sturgis Drinker. Beaux’s handling of Drinker’s dapper white suit, in particular, is just glorious. She pairs naturalistic rendering of light and shade in the suit’s drapes and folds with energetic bravura brushwork.  Beaux made monumental, upper-class portraiture in a style that sympathized with Impressionism, despite not quite being Impressionist itself. Her skillful amalgamation of tradition and modernity makes it easy to understand why her work was in such high demand.

John Singer Sargent (1856-1925) was the quintessential Gilded Age portrait painter, if not the most celebrated American portrait painter of all time. He was born in Florence to American parents, traveled the world, and found fame on two continents. He is best known for his scandalous Madame X, which nearly spelled the end of his portrait painting career and forced him to leave France for England and America.

The Madame X controversy aside, Sargent was usually very adept at walking a fine line between tradition and innovation. This was a necessary skill for any painter of fashionable society members. His subjects appear respectable and dignified, yet simultaneously fresh and lively. His soft, flowing brushwork gives his paintings a modern feeling, yet his works are cohesive and naturalistic enough to satisfy his status-conscious sitters.

Initially, many of the people who commissioned portraits from Sargent were forward-thinking types for whom his slight air of the avant-garde was a selling point. In the wake of the Madame X fiasco, Americans were more likely to patronize Sargent than more traditional Europeans. One such daring American was the woman depicted above. Mary Louisa Cushing Boit was an American expatriate living in Paris with her husband, Edward Darley Boit, and their children. The four Boit daughters were the subject of Sargent’s famous group portrait The Daughters of Edward Darley Boit, which suggests tension and alienation amongst the adolescent girls. Meanwhile, the woman depicted below, Elizabeth Allen Marquand, obviously had more traditional tastes to which Sargent catered in his portrait redolent of early America. Marquand was the wife of Metropolitan Museum of Art co-founder Henry Gurdon Marquand, whom Sargent also portrayed in a similar manner.

As Sargent’s fame grew, a surprising number of establishment figures, including members of the British royal family, clamored for his work. While Sargent’s sitters were all noteworthy individuals in some way, they included everybody from established aristocrats to new money, conservative politicians to progressive intellectuals, writers to artists, musicians, and athletes. He was personally friendly with many of these luminaries. Sargent is one of the few American artists to appear widely in European museums, particularly in the United Kingdom.

Far from being uninspiring, conservative, or superficial, Gilded Age portraits can be wonderfully and subtly innovative. The best examples intelligently blend knowledge of the Old Masters with lively and charismatic brushwork. While many portray members of the leisure classes, the subjects were not necessarily frivolous socialites. The personalities memorialized in images by Eakins, Chase, Beaux, Sargent, and others were often artists, intellectuals, bohemian expatriates, and other intriguing members of turn-of-the-century society. American Gilded Age portraits can be fantastic, and they are well worth taking a look at in any major American art museum.

15 Facts About Anthony van Dyck: A Man Who Knew Many Faces

15 Facts About Anthony van Dyck: A Man Who Knew Many Faces