HomeArtFelix Gonzalez-Torres: Haunting Works of an Artist Afflicted with AIDS

Felix Gonzalez-Torres: Haunting Works of an Artist Afflicted with AIDS

Felix Gonzalez-Torres is well-known for his conceptual art installations with everyday objects, that address themes like his experiences as a gay man, the impact of AIDS, love, and death. 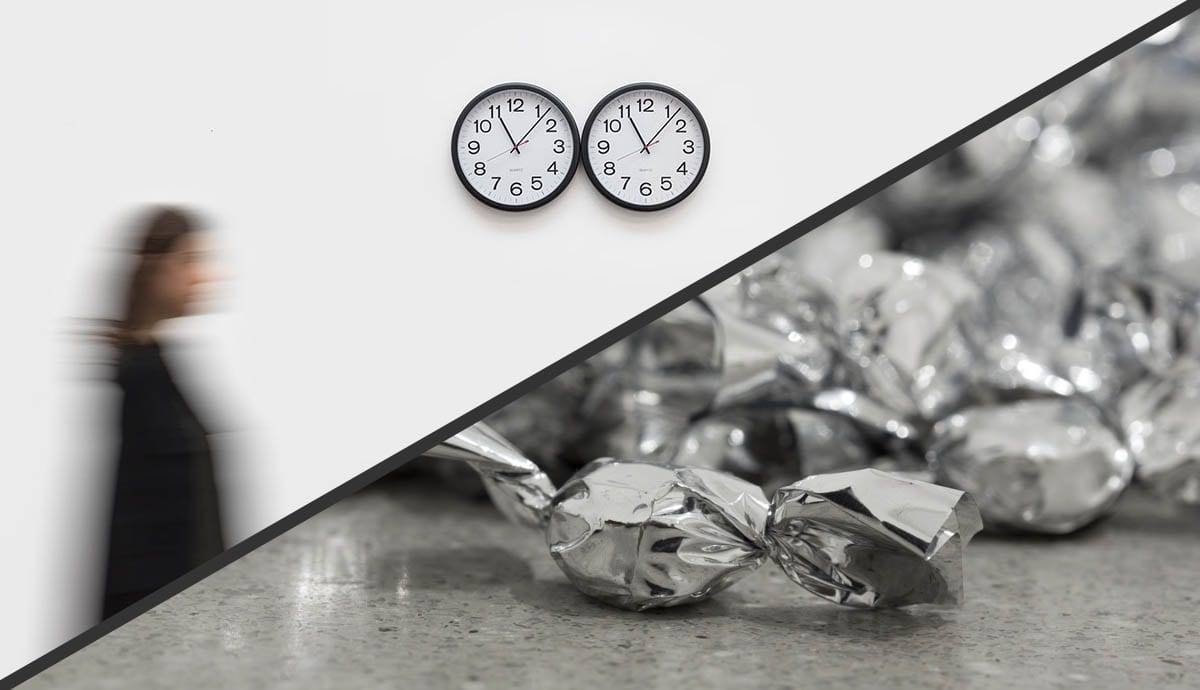 Felix Gonzalez-Torres was born in Cuba in the year 1957. He moved to New York in 1979, where he also earned his Bachelor’s and Master’s degree in Fine Arts. Four years later he met Ross Laycock, who became his boyfriend and played an important role in the artist’s work. Ross died of AIDS in 1991, and Gonzalez-Torres lived until 1996, but he eventually also lost his life to the illness. The experiences of same-sex relationships, losing a loved one, and struggling with AIDS are all subtly yet powerfully portrayed in his works and art installations. Here are some of his most captivating artworks.

Despite the fact that Felix Gonzalez-Torres always named his pieces using the word “Untitled,” he also added a title with personal meaning to him, like “Perfect Lovers.” The work “Perfect Lovers” consists of two identical clocks that are set to display two exact and same times. Since the clocks are powered with batteries, they will not be synchronized forever and will stop working at some point. The artwork indicates that just like these clocks even perfect lovers will eventually stop being in sync and die individually. For some time, however, they are connected through synchronized and rhythmic movement.

When Ross was diagnosed with AIDS in 1987, Gonzalez-Torres had the idea to depict the time they had spent together and the time they had left as a couple. This idea would later become the artwork “Perfect Lovers.” In 1988, Gonzalez-Torres wrote a letter to Ross with a drawing of two clocks stating: “Don’t be afraid of the clocks, they are our time, the time has been so generous to us. We imprinted time with the sweet taste of victory. We conquered fate by meeting at a certain time in a certain space. We are a product of the time therefore we give back credit where [sic] it is due: time. We are synchronized, now forever. I love you.”

The artwork “Perfect Lovers” came in 1991, after Ross died of AIDS. Gonzalez-Torres gave permission for numerous reproductions of the artwork. The possibility to replicate the piece emphasized the conceptual value of the work that lies in the idea rather than in the physical object itself. The artist specified that if a clock stopped working, it had to be repaired or replaced. That way, he and Ross would always be connected through the artwork. Even when one or both partners die, the idea of their love is immortalized in the synchronized clocks of “Perfect Lovers.”

The portrayal of same-sex relationships, which has a history of underrepresentation, conveys itself subtly in this artwork. It stands for the universal experience of love, but it is also the product of a gay artist who refers to the relationship with his lover. The artwork, therefore, establishes an equal view of homosexual and heterosexual relationships.

“Perfect Lovers” additionally discusses the painful realization of only having limited time with the people we love and the frightening inevitability of death. Felix Gonzalez-Torres himself referred to time as “something that scares me” and called the artwork “the scariest thing I have ever done.” The physical implementation of the artwork, however, helped him to face those fears and ultimately overcome them.

The title of the artwork “Portrait of Ross in L.A.” stresses the importance of Felix Gonzalez-Torres’s relationship with Ross Laycock. It shows an unusual portrait that does not depict the subject’s face in a conventional way. It rather exemplifies the density, physicality, and weight of the body. The ideal weight of the art installation is 175 pounds, which was the weight Ross had before he suffered from AIDS-induced weight loss. The visitors of the exhibition were invited to take a piece of candy from the pile.

Through the interaction of the audience, the weight of the artwork was gradually reduced. The artist, however, gave the instruction that the pile of candy would always have to be refilled. The reduction of the artwork’s “body” and weight can be interpreted as relating to the weight Ross lost before his death.

Since “Portrait of Ross in L.A.” was made in 1991, which was the same year that Ross died, one can assume that the artwork helped Felix Gonzalez-Torres cope with his partner’s death. The refilling of the pile compensates for the pain caused by illness, death, and suffering through evoking memories of the healthy and alive loved one. It provokes a bittersweet feeling of love and loss. Felix Gonzalez-Torres once said that Ross was the primary audience for his art. The portrait out of candy stresses the significance of him for the artist even after his death.

The political perspective of “Portrait of Ross in L.A.” relates to the AIDS crisis during that time. Since the effort of the government to deal with this crisis was often criticized as inadequate, the art installation confronts the public with a very personal and emotional picture of AIDS. By taking a piece of candy they take part in the decrease of the pile and also in the symbolic death of Ross. The audience is forced to engage heavily with the illness and the marginalized group of affected people.

Another famous work of Felix Gonzalez-Torres’s “Candy Spills” is “Placebo.” Created in the same year as “Portrait of Ross in L.A”, his “Placebo” art installation also relates to the loss of his lover and the ongoing AIDS crisis. Visitors could again take candy from the artwork which was laid out flat on the floor in a rectangular shape and consisted of almost 40.000 pieces with an ideal weight of 1200 pounds. The weight and size of the artwork naturally decreased during its exhibition.

The name “Placebo” indicates a relation to the placebos that patients with AIDS received during medical trials in search of medication to treat the illness. It presents another example of bringing people to engage with the illness and the ones affected by it. The art installation makes the experiences of those visible who were marginalized by society and were lacking the necessary support from the state because of their affliction with AIDS. Through the act of taking a piece of candy and putting it in your mouth, the artwork and the crisis become part of you, thus evoking a feeling of responsibility.

The minimalist art installation “Toronto” consists of numerous lightbulbs attached to two strings hanging down from a wall. Gonzalez-Torres’s two cords and radiating light bulbs can be interpreted as a depiction of two lives close to and entangled with each other. Since the glass of the lightbulbs is fragile and their lights eventually go out, they can be seen as similar to human life. Our body and life can easily be taken from us and the time we have is limited. “Toronto” therefore addresses topics common for the artist’s work, like life, love, and death. It encompasses the painful feeling of transience and the beautiful sensation of affection and existence. The viewer is again confronted with their own mortality and the inevitability of their loved ones dying.

Felix Gonzalez-Torres did not specify how the strings have to be presented. He wanted the owner to experiment with the presentation of the artwork leading to seemingly endless possible variations of the pieces’ display. This approach reflected the artist’s intention that the appearance, as well as the meaning of the work, should be individually shaped by the viewers.

Felix Gonzalez-Torres’s work “Billboard of an Empty Bed” shows a black and white photograph of an unmade bed with two pillows. The picture was placed on billboards all over New York. Both pillows show noticeable dents that reveal the heads of a couple that recently rested in the bed. The artwork’s reduced aesthetic does not give away much else. Since the piece was also created the same year Felix Gonzalez-Torres’s boyfriend Ross died, it can be interpreted as a melancholic illustration of facing an empty bed.

“Billboard of an Empty Bed” can simultaneously be seen as the celebration of love. Since Felix Gonzalez-Torres did not hide his sexual orientation and even addressed it in his work, the billboards also show the love and intimacy of a gay couple. He himself said about the artwork:

“What I’m trying to say is that we cannot give the powers that be what they want, what they are expecting from us. Some homophobic senator is going to have a very hard time trying to explain to his constituency that my work is homoerotic or pornographic, but if I were to do a performance with HIV blood — that’s what he wants, that’s what the rags expect because they can sensationalize that, and that’s what’s disappointing. Some of the work I make is more effective because it’s more dangerous. We both make work that looks like something else but it’s not that. We’re infiltrating that look.“

He thereby subverted the heterosexual view of love, intimacy, and sexuality. Even though “Billboard of an Empty Bed” is not a sensational piece, it still sends a political message. It diverts the heteronormative view in a subtle way and makes gay love visible.

Felix Gonzalez-Torres’s hauntingly powerful artworks challenge the viewer, and they encourage them to think. With the necessary background knowledge, his minimalist pieces unfold a variety of possible interpretations that range from highly emotional and intimate stories to political critique. His works serve not only as comfort for people dealing with loss, illness, and death, but they also question social norms and can inspire political change.

Food Art: 10 Artworks That Will Make Your Mouth Water