HomeArtAn Introduction to the Arts and Crafts Movement

Dissatisfied with the rise of plain-looking and mass-produced items caused by the industrial revolution, the Arts and Crafts movement advocated the importance of decoration and beauty. 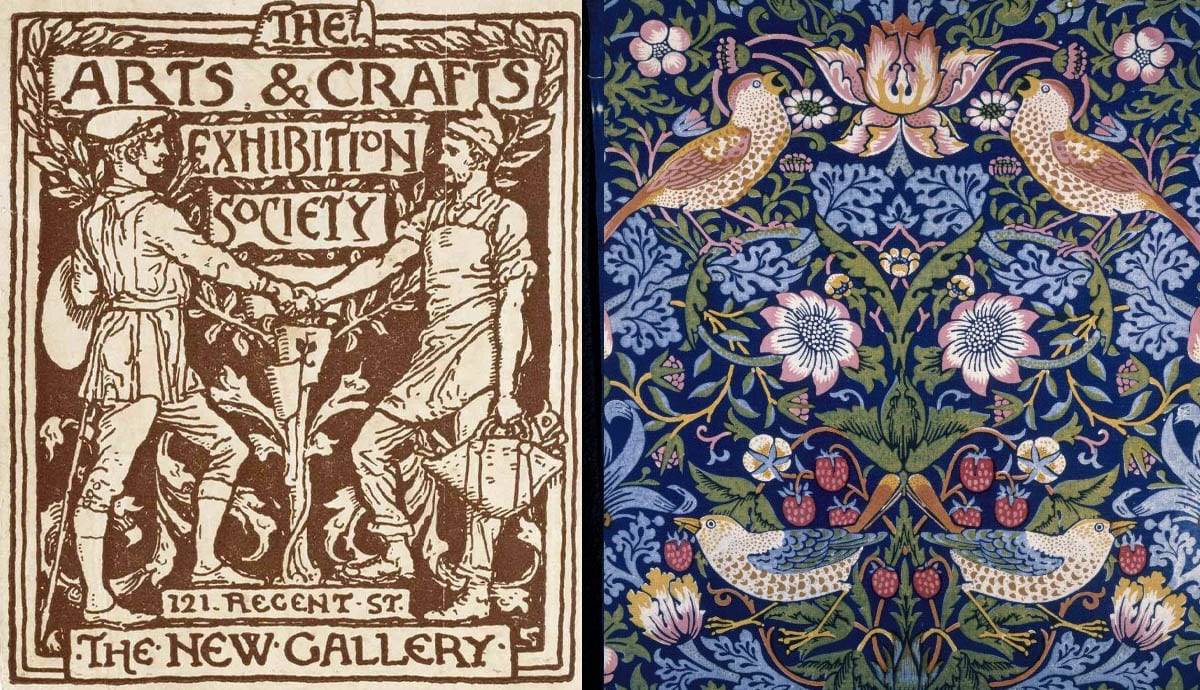 The 19th century was heavily influenced by the impact of the industrial revolution. Aspects such as work, production, everyday life, and art were all affected by the technical changes of the period. In the second half of the 19th century, a group of people was discontent with what they thought was a deterioration of design and manufacturing. This resulted in the Arts and Crafts movement, whose representatives promoted handicraft instead of mass production. They advocated the idea that objects should be useful as well as beautifully decorated and that handicrafts should have the same status as fine art. Here is an introduction to the influential 19th-century art movement.

Origins of the Arts and Crafts Movement

Some of the ideas that defined the Arts and Crafts movement can be traced back to the English architect and designer Augustus Welby Northmore Pugin. He was an important figure of the Gothic Revival style of architecture and lived from 1812 to 1852. Pugin was, like other advocates of the Arts and Crafts movement, unsatisfied with the design and architecture of his time. He described it as “the present decay of taste” and strove for gothic architecture that would represent the Christian values of the medieval period.

This notion of the Middle Ages as an ideal model for craftsmanship, design, and architecture would later become an important aspect of the Arts and Crafts movement. Pugin also wrote that design should have no unnecessary features that contribute nothing to construction or convenience. In addition, he mentioned that the purpose of decoration should be the “enrichment of the essential construction”. Both ideas can not only be found in the successive Arts and Crafts movement, but they were also important for the design theory of the 19th century.

In 1851, the Great Exhibition took place at the Crystal Palace in London. It was supposed to demonstrate Britain’s leading position in technology and design. Queen Victoria and Prince Albert organized the exhibition with the help of Henry Cole who played an important role in reforming industrial design. The designs shown in the exhibition were criticized as lacking a universal style, which The Times described by writing “The absence of any fixed principles in ornamental design is apparent in the exhibition.” Another point of criticism was the decadent use of decoration and the disregard for the material.

There were many problems that design faced during those times: industrialization and the related deterioration in quality and aesthetics, the lack of unity, as well as a low status compared to the fine arts. The Arts and Crafts Exhibition Society, a group that was founded in 1887 in London, wanted to change the public perception of design and elevate the status of crafted objects. Therefore, they organized their first annual exhibition in 1888. The Society did not only give the movement a name, but it also created a regular exhibition space for the underrepresented decorative arts.

The 19th-century art movement was named after the Arts and Crafts Exhibition Society, but other groups were part of it as well. A few examples of related groups were the Arts Workers Guild, the Exhibition Society, and other businesses concerning themselves with craftsmanship. Even though the movement consisted of different groups, they were united by some key ideas and concepts.

Objects Should Be Useful and Beautiful

One important feature of the Arts and Crafts movement was its aspiration to create items that were beautiful and useful. William Morris, an influential designer associated with the 19th-century art movement, once said: “Have nothing in your houses that you do not know to be useful or believe to be beautiful.“ The practitioners working according to this principle wanted people to be able to use the objects they keep at home in their everyday life, while simultaneously appreciating the item’s decorative nature. This resulted in the characteristically ornate shapes combined with the utility and good quality associated with the movement.

Critique of Machines and the Revival of Medieval Craftsmanship

Another key aspect of the movement, especially in Britain, was the members’ often negative view of machinery and the consequences of the industrial revolution. They criticized the repetitive conditions in factories and the “soullessness” of the machines and wanted to revive the relationship between production and creative craftsmanship. The medieval period served them as an ideal example of this relationship. Advocates of the movement wanted the maker to be a skilled craftsman who was involved in the creation of the object from the beginning. Instead of production taking place in large factories, the crafting process should be confined to smaller workshops.

The lack of unity, which was a point of critique in the Great Exhibition of 1851, was overcome by the Arts and Crafts movement. There was an emphasis on creating a harmonious interior. This meant that from architecture to tableware, the design would fit together. Many designers of the 19th-century art movement were therefore often active in more than one discipline and would for example design furniture as well as textiles. This variety in designed items can be seen in the works associated with the Arts and Crafts movement since they range from wallpaper and glassware to buildings and books.

Key Figures of the Arts and Crafts Movement

William Morris was one of the most influential members of the Arts and Crafts movement. He was born in East London, in 1834 and studied at Oxford University where he met the Pre-Raphaelite painter Edward Burne-Jones. Along with Edward Burne-Jones and other friends, Morris founded the interior firm “Morris, Marshall, Faulkner, and Company” with the intention to create handmade objects inspired by medieval craftsmanship. His work and company contributed immensely to the Arts and Crafts movement.

John Ruskin was another key figure of the Arts and Crafts movement. He was a philosopher and art critic who criticized the way of production in factories and its effects on society. Ruskin believed that the process of design and creation should not be separated, since he found this to be harmful to both society and the visual qualities of the object. His ideas had a great influence on Morris and the Arts and Crafts movement in general.

The Women of the Arts and Crafts Movement

The involvement in the 19th-century art movement was not solely restricted to skilled craftsmen. Students and beginners could also take part in the act of designing and making. This open atmosphere also made it possible for women to get involved. Even though women still faced many forms of discrimination, like their exclusion from the Art Workers’ Guild until 1964, they made up an important part of the movement.

May Morris was one of the women who were active during the movement. The English artisan was the daughter of William Morris and is especially known for her embroidery designs. She became the manager of the Morris & Co. embroidery department in 1885 when she was only 23 years old. During her time at the company, she created many designs, some of which were wrongly attributed to her father William Morris. Since women were not allowed to join the Art Workers’ Guild until 1964, May Morris founded the Women’s Guild of Arts in 1907.

Examples of the 19th-Century Art Movement

The architectural style of the time was significantly influenced by the Arts and Crafts movement. Architects like Philip Webb, Edwin Lutyens, and Charles Voysey created buildings that included historic as well as regional features. One example of the movement’s architecture is The Red House in Bexleyheath, designed by William Morris and Philip Webb. The uniquely structured asymmetrical building with gothic features served as a home for Morris and his family. Consistent with the movement’s aspirations, the architecture combines decorative elements with simplicity and functionality.

Horn Poppy Wallpaper by May Morris

Wallpapers and textiles decorated with floral ornaments are characteristic of the products associated with William Morris’ company. Even though the Horn Poppy Wallpaper was made by his daughter May Morris, the print was one of the designs that were sometimes falsely attributed to Morris himself. Many of May’s works were inspired by her father and his poems, as was this specific wallpaper design. In one of his poems, William Morris characterized the horned poppy as “thin and bright”, which could have influenced May’s depiction of the plant.

The armchair designed by Ernest William Gimson exemplifies the furniture that was produced in the Cotswolds during the Arts and Crafts movement. It also displays the movement’s emphasis on the combination of distinctive decoration and functional simplicity. The rounded, bead-shaped features of the chair were influenced by the bobbins used for textile weaving.

The decanter was designed by the English architect Charles Robert Ashbee, who was an essential member of the Arts and Crafts movement. The decorative and functional metal of the vessel displays marks of the hammer with which the object was made. This showcases the fact that it was crafted by hand. Many of the British members of the Arts and Crafts movement preferred handicraft over machine production. The visible signs of the artisan’s process can be seen as a testament to more traditional manufacturing.

Criticism of the Arts and Crafts Movement

The Arts and Crafts movement was sometimes criticized for having an outdated approach to modern problems. Some people doubted that its works were practical enough to survive in a society shaped by crowded cities and industrialization. Despite the criticism, this 19th-century art movement had a considerable impact and influenced other styles such as Art Nouveau.

Get To Know Edward Burne-Jones In 5 Works

The Case of John Ruskin vs. James Whistler