HomeStoriesThe Gothic Revival: How Gothic Got Its Groove Back

The Gothic Revival: How Gothic Got Its Groove Back

The Gothic Revival was a movement that imitated medieval Gothic architecture in the modern world. It began in 18th-century England, quickly spread across the world, and is still visible today. 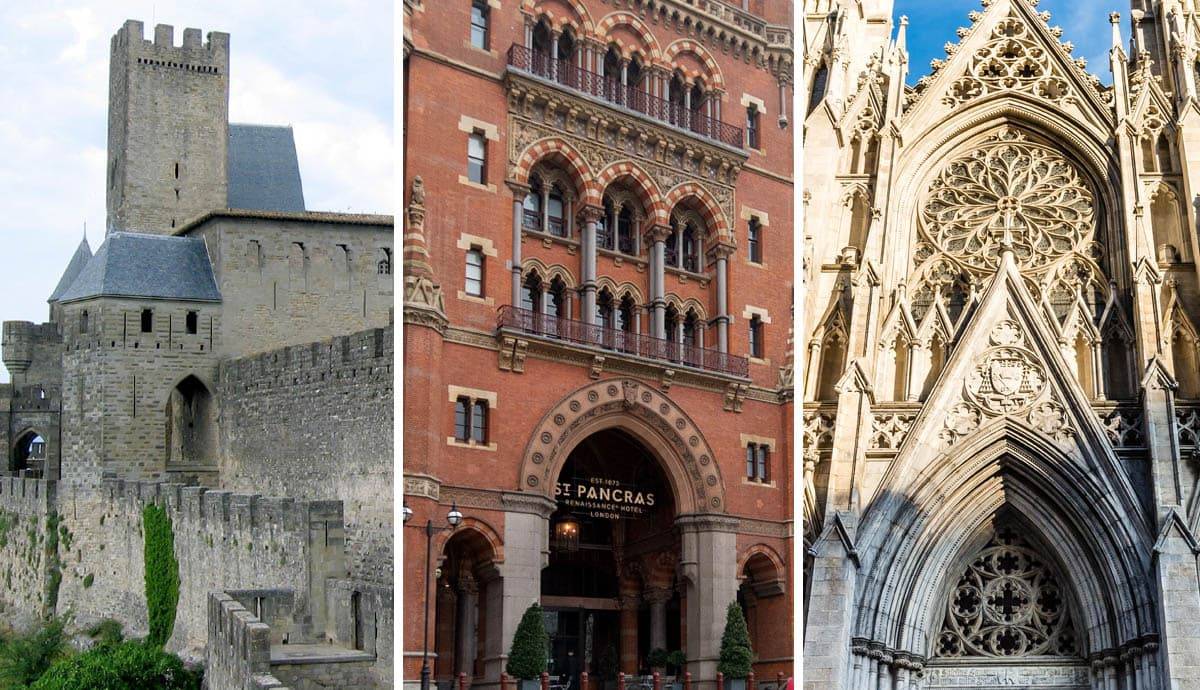 With its pointed arches, soaring vaults, quirky gargoyles, and stained-glass windows, the Gothic style of architecture was ubiquitous during the European Middle Ages. However, it went quite deeply out of fashion during the Renaissance and Enlightenment, replaced by a classically-inspired vocabulary that was better suited for those eras’ worldviews. Considered backward, superstitious, and unenlightened, everything to do with the medieval period generally fell into disfavor for several centuries. In 18th-century England, however, a group of thinkers began to appreciate the Middle Ages again. Their enthusiasm led to a full-scale Gothic Revival in art, architecture, literature, philosophy, and more. This revival spread throughout the world, and its results continue to shape our cultural landscape.

The Gothic Revival is closely related to Romanticism, an 18th and 19th-century movement embracing the subjectivity and emotion that had been suppressed under the rigorously-logical Enlightenment. To educated Europeans, the Middle Ages had long represented a time of ignorance and credulity that prioritized religion and superstition over science. To the Romantics, on the other hand, these qualities were seen as good things. It’s no wonder that people like Arts & Crafts proponent William Morris saw medieval handicraft traditions as the perfect antidote to the Industrial Revolution’s impersonal mass-production.

The British Pre-Raphaelites and German Nazarenes, two groups of 19th-century painters, similarly drew inspiration from medieval aesthetics and values. Moreover, the Middle Ages provide great examples of the Sublime and the Picturesque, two key components of Romanticism. The idea of a simpler and more honest medieval way of life could be decidedly Picturesque, while a dark and mysterious Gothic ruin could evoke terrifying Sublimity. For this reason, Gothic buildings often appear in Romantic landscape paintings, including works by Caspar David Friedrich and J.M.W. Turner.

The Middle Ages as Modern Nationalism

On the other hand, the Gothic Revival should not be understood solely through the lens of Romanticism. The rediscovery of medieval culture also coincided with a period of intense European nationalism in the 19th century. The revival’s origin amongst English tastemakers was closely wrapped up in a sense of “Englishness” that the style was perceived to represent. Although general consensus now considers France the birthplace of Gothic architecture, several other countries had wanted to lay claim to it.

England had a rich medieval history to tap into, one that also involved religious and political tensions between Catholics and Protestants. Some of the revival’s earliest proponents, including prolific designer Augustus Welby Northmore Pugin, belonged to England’s Catholic minority. On the other hand, members of the Protestant majority sometimes interpreted Gothic’s divergence from Italian classicism as proving the English church’s longstanding independence from Papal Rome. Many other European cultures also embraced their medieval pasts as icons of their unique national identities. This was especially true for the many groups seeking independence from outside rulers. However, revivals like those of medieval Celtic and Viking art, literature, and language became popular far beyond their own cultural groups.

The Gothic Revival and other medieval revivals had strong literary components, too. The Gothic novel, a forerunner of the horror movie and typically set in a foreboding Gothic ruin came about at this time. In fact, two of the Gothic Revival’s earliest advocates were authors. Horace Walpole (1717-1797) wrote the first Gothic novel, The Castle of Otranto while living in one of the earliest Gothic Revival mansions. Scottish author Sir Walter Scott (1771-1832) created the now-popular historical fiction genre through his Waverly novels. The Gothic Revival tradition also inspired still-popular Sublime masterpieces Frankenstein and Dracula, as well as painted equivalents like Henri Fuseli’s The Nightmare. Literature factored into the nationalistic angle as well. Medieval art and architectural revivals coincided with a renewed interest in Shakespeare sparked enthusiasm for British, Celtic, and Scandinavian myths, and inspired the medieval Germanic operas of Richard Wagner.

Cultural context aside, Gothic Revival is best known, and most visible today, as an architectural style. Its buildings take on many different appearances, from essentially modern constructions with sporadic Gothic elements to elaborate structures borrowing closely from surviving medieval buildings. Some remain faithful to their Gothic predecessors, while others marry Gothic with local or modern aesthetics, materials, and motifs to create something new from an old architectural vocabulary. While a few examples may manage convincing airs of antiquity, most betray their relative youth in one way or another. Gothic Revival buildings tend to reflect 19th-century views of the Middle Ages, which don’t necessarily represent the Middle Ages itself.

The original Gothic took on slightly different characteristics in different nations, so Gothic Revival architects looked to France, England, Italy, and Germany for a variety of approaches to draw from. However, most Gothic Revival buildings include at least a few of the most recognizable Gothic elements. These include pointed or ogee arches, tracery, rose windows, rib or fan vaults (often with extra ribs for decoration), pinnacles, crockets, gargoyles, or grotesques, and other carved decorations. Yet so-called Gothic Revival buildings may also employ non-Gothic medieval motifs, including castle-like crenellations, fanciful towers and turrets, and Romanesque rounded arches or monumental masonry. In the United States, architect Henry Hobson Richardson started a taste for Romanesque-style public and private buildings, often termed Richardsonian Romanesque.

Inside, Gothic Revival buildings may include additional decoration in the form of stained glass, elaborate stone and wood carvings, decorative painting and textiles, and murals or tapestries showing medieval imagery and literary narratives. Heraldry, religious figures, grotesques, scenes from Shakespeare’s plays, Arthurian legend, and chivalric literature were all popular. Gothic Revival interiors, particularly in wealthy homes, could also feature Gothic Revival furnishings, though these dark wood pieces were typically based on Gothic architectural motifs, rather than on actual medieval furniture.

Viollet-le-Duc and Gothic Revival in France

In France, the nation that launched Gothic architecture in the 12th century, the Gothic Revival took a different turn. France had plenty of its own medieval enthusiasts, best exemplified by Notre-Dame de Paris author Victor Hugo, and the country obviously felt deeply connected to the Gothic style. However, the French generally focused on caring for their existing medieval patrimony rather than expanding it. Many French Gothic churches had remained in use up until this point, but most had either endured heavy modification or fallen into disrepair.

Eugène Viollet-le-Duc (1814-1879) devoted his life to studying and restoring Romanesque and Gothic buildings in France. He worked on almost every major Gothic church in the country, including Notre-Dame de Paris, Saint-Denis, and Sainte-Chapelle. Viollet-le-Duc’s knowledge and passion for medieval architecture should not be questioned. However, his heavy-handed methods of conservation have been controversial since his own lifetime. Modern-day art and architecture conservators aim to intervene as little as possible, but Viollet-le-Duc was more than happy to improve upon medieval originals as he saw fit. His reconstructions of sites like the Chateau of Pierrefonds and the walled city of Carcassonne were extensive and deeply rooted in his personal vision of the medieval past. They truly blur the line between medieval and medieval revival. Scholars often lament what has been lost through Viollet-le-Duc’s alterations, but many of these structures would not likely survive today without his efforts.

Gothic Revival spread quickly beyond its European origins, arriving in countries with no Gothic tradition of their own. It particularly flourished in places with cultural or colonial ties to the British Empire. One can find examples on practically every continent today. Because Gothic has always been most closely associated with churches, it became the go-to style for both Catholic and Protestant church construction throughout the world. Gothic also enjoys an association with colleges and other places of learning, because Europe’s earliest universities were founded during the same period that the Gothic style was current. The fact that Gothic remains emblematic of both Christianity and higher education is largely due to countless Gothic Revival examples of both institutions.

However, the Gothic Revival has also been used for many other functions, including public buildings, like libraries and train stations, and private homes both grand and modest. At first, only wealthy families could afford to live out their medieval fantasies in pretend castle or monastery mansions. Eventually, even homeowners of average means could live in houses with a few Gothic details. In the United States, wooden homes with Gothic decorative elements are sometimes called Carpenter Gothic. The style even appears in Grant Wood’s famous painting American Gothic, whose title comes from the single lancet window visible on the white wooden house.

The Legacy of Gothic Revival

Similarly, we continue to enjoy the movement’s legacy in pop culture, literature, academia, fashion, and more. We read historical fiction novels, watch movies set in the Middle Ages, study medieval history, adapt medieval European mythology into modern stories, and consume music and design inspired by medieval precedents.  Meanwhile, Gothic churches are some of Europe’s most popular tourist attractions. We owe all of this enjoyment to the Gothic Revivalists and other Romantics. They saw the value of medieval culture in a way that their ancestors had not.