Notre-Dame de Paris made the headlines in 2019 because of the fire that nearly destroyed the gothic cathedral. Read along to discover who reshaped the monument during the 19th century. 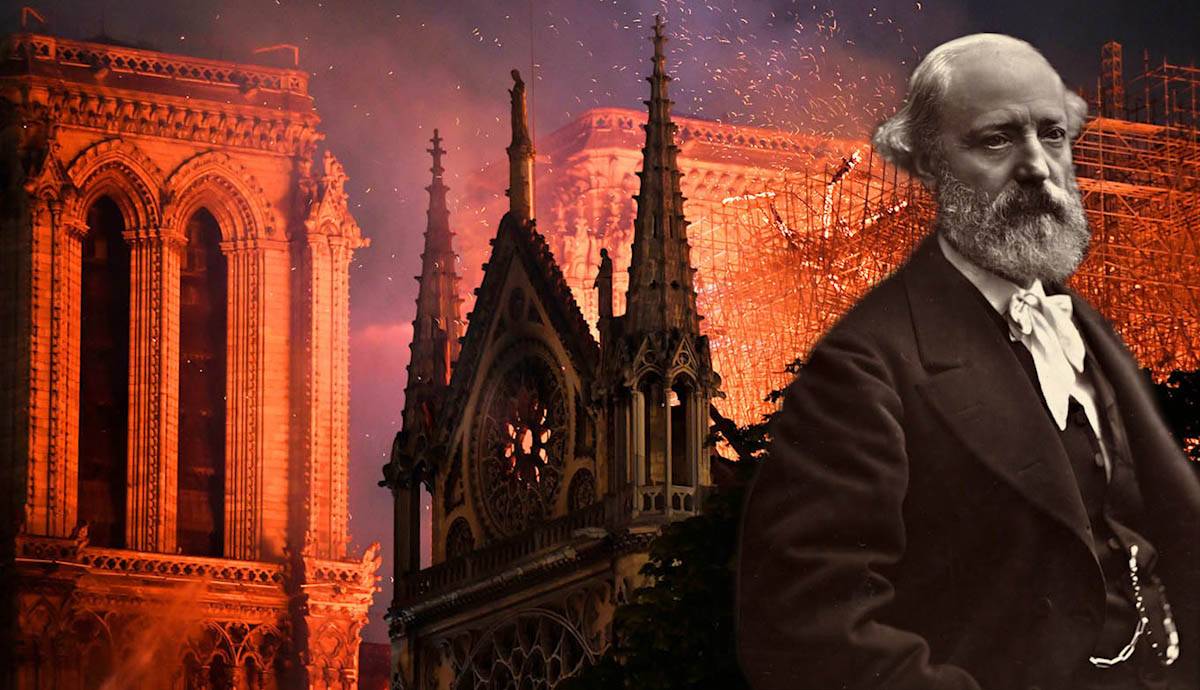 Notre-Dame de Paris, the famous cathedral, made the headlines in April 2019 because of the fire that destroyed its medieval roof. The distinctive appearance of the gothic cathedral dates back to the 12th and 13th centuries. However, not all the unique features of Notre-Dame are genuinely medieval.

Over the centuries, the monument suffered from pillage and destruction, especially during the 1789 French Revolution. At the beginning of the 19th century, Notre-Dame was in ruins. Parisian authorities chose the young architect Eugène Viollet-le-Duc to supervise the restoration. The architect not only restored but also reshaped the medieval cathedral.

Along with the restoration of Notre-Dame de Paris, Eugène Viollet-le-Duc is famous for other restoration projects he supervised, particularly those involving medieval architecture — his specialty. During the 19th century, the era of Romanticism and the glorification of the past, Viollet-le-Duc significantly contributed to creating public awareness of the importance of preserving and restoring France’s architectural heritage.

Eugène Emmanuel Viollet-le-Duc, one of the most famous French architects of the 19th century, was born in Paris in 1814. Eugène’s passion for architecture was rooted in his family. His grandfather was an architect, and his father was the Governor of Royal Residences in the Tuileries Palace.

Although his family pushed him to join the Academy of Fine Arts, Eugène refused and only conceded to start an internship with two architects. This internship made him discover architecture while spending his days on building sites. In his free time, Eugène traveled a lot with his uncle, Etienne-Jean Delécluze. While traveling on horseback, he explored France’s regions and its architectural heritage. He studied and made numerous drawings of the country’s best landmarks. With the same appetite for knowledge, Eugène discovered Italy’s treasures. As Viollet-le-Duc said himself: “to see is to know, to know is to create.”

Viollet-le-Duc was a genius in his field. He acquired an enormous amount of knowledge, which he used to plan his restoration projects thoroughly. He planned every detail carefully and monitored the builders’ work, making sure that everything followed his plans. Eugène designed everything, from prominent architectural elements such as spires to the small decorative details such as the junctions of parquet floors. He was a universal architect and did everything himself. He had a deep knowledge of all the various trades involved in a building site.

The 19th century marked a dawning public awareness of the need to preserve French architectural heritage. Following the 1789 French Revolution, and the ensuing pillage and demolition of landmarks and buildings all over the country, numerous personalities pleaded for the protection of historical monuments. It was also the era of the Romantic Movement, which glorified the past, especially the Middle Ages.

In 1830, the French authorities created a new job:  Inspector of Historic Monuments. The appointed person was in charge of inventorying France’s built heritage and allowing funds for their conservation and restoration. Archaeologist and historian Prosper Mérimée became the inspector in 1834 and he appointed Eugène Viollet-le-Duc to his first restoration project in 1840. Mérimée chose the young Eugène to work on the rehabilitation of Vézelay Abbey, today a UNESCO World Heritage Site located in the Bourgogne-Franche-Comté region in eastern France. With cracked walls and a collapsed tower, the abbey was in a poor state.

This first restoration project which lasted until 1859, allowed Eugène to develop the concepts that would form his architectural theory. He favored the architectural structure of the building over the decor and he banned the use of modern materials such as iron.

In his 1856 Dictionary of French Architecture From the 11th to the 16th Centuries, Viollet-le-Duc explained that: “To restore a building is not to preserve it, to repair, or rebuild it; it is to reinstate it in a condition of completeness which could never have existed at any given time.” This quote explains his theory well. Viollet-le-Duc’s goal was to reach his ideal of what medieval architecture was, regardless of whether the building had ever looked that way.

In 1842, Prosper Mérimée commissioned the restoration of Notre-Dame de Paris. The medieval cathedral that had hosted many historical French events, such as the coronation of Emperor Napoleon in 1804, was in ruins.

The gothic cathedral dates back to the 12th century. In 1160, the bishop of Paris, Maurice de Sully, oversaw the building of a larger sanctuary, replacing the older and smaller Roman cathedral. Several centuries were necessary to complete the construction.  Over the years, the monument suffered from pillaging and degradation, most notably during the 1789 French Revolution. During these troubled times, the cathedral lost its sacred function and became the target of revolutionaries who were searching for royal symbols to destroy. On top of that, Notre-Dame, like many other buildings, suffered successive clumsy transformations and restorations at a time when historical accuracy was not considered important.

Although it is unthinkable today, due to its poor state of conservation, Notre-Dame was about to be demolished. Thanks to certain personalities, such as Victor Hugo and his 1831 novel The Hunchback of Notre-Dame (Notre-Dame de Paris in French), the ruined gothic cathedral gained renewed interest in the public eye, and the authorities considered restoring it. Notre-Dame de Paris was saved!

Paris’ authorities chose the 28 years old Viollet-le-Duc and Jean-Baptiste Antoine Lassus to restore the cathedral. The two architects presented a thoroughly studied, detailed, and above all, extremely innovative project, winning the favor of the jury. A few years after the beginning of the work, Lassus died, leaving Viollet-le-Duc the only master of the restoration until its completion in 1864. The initial settled budget of 2,650,000 francs rapidly evaporated, and the work had to stop until further funds were granted.

Facing the Dilemmas of Restoration

Even today, restoration is challenging. Viollet-le-Duc and Lassus faced the dilemma of having to choose between different time periods for the construction. The cathedral’s 12th-century exterior had been heavily transformed during the 13th century, while the inside was remodeled during the 18th century. The architects had to make decisions about the preferred state of Notre-Dame.

Several decisions were difficult to make. For instance, innovative 13th-century building techniques allowed the builders to widen the windows, bringing more light into the dark building. A key question was whether the restorers should favor the cathedral’s original state or the 13th-century improvements. Viollet-le-Duc and Lassus decided to restore a few features of the 12th-century cathedral, such as the rose windows. They had the same dilemma with the 13th-century flying buttresses, which did not exist in the early years of the cathedral. The architects chose to keep them. Viollet-le-Duc and Lassus mainly favored the rayonnant style of the 13th century, instead of the original roman style.

As thorough as the restorers’ study of the cathedral’s history had been, they made a few mistakes due to incorrect facts conveyed in the literature. For example, since the 13th century, it was common knowledge that the sculpted figures standing on the gothic cathedral’s front wall, between the two towers, represented the kings of France. This was a common mistake. These sculptures actually portrayed the Kings of Judah. Due to this misunderstanding, the sculpted kings became targets during the Revolution, wrongly seen as a symbol of the French monarchy.

Among Viollet-le-Duc’s most remarkable achievements from the restoration of Notre-Dame are the sculpted replicas of the numerous missing medieval sculptures. Based on a few low-quality engravings and existing examples on other French cathedrals, Viollet-le-Duc made drawings of more than a hundred statues. Along with his team of great sculptors, they achieved a nearly perfect reconstruction of the medieval sculptures. Viollet-le-Duc gave the sculptors detailed instructions to follow and closely overlooked their work. The architect even gave his own features to one of the copper statues that used to stand on the cathedral’s roof: Saint Thomas, the apostle.

Yet, Notre-Dame de Paris is famous mainly for its gargoyles and chimeras. Although the gargoyles — the sculpted, beast-like gutters typical of gothic architecture — are medieval, the chimeras are one of Viollet-le-Duc’s additions with no archeological base. The chimeras served a decorative purpose and referenced the fascination with legendary beasts during the Middle Ages. Eugène designed the sculptures mainly based on Honoré Daumier’s caricatures and an illustrated version of The Hunchback of Notre-Dame. The chimeras, which became a huge hit, exemplify Viollet-le-Duc’s creative genius, although they are an aspect of his work that is often criticized.

The Notre-Dame fire in April 2019 brought Eugène Viollet-le-Duc to the center of the discussions about the cathedral’s restoration. The same dilemma he faced almost two centuries ago, the authorities now have to face again, saddled with the difficult task of choosing which of the different states of the cathedral’s history should be restored. What about Viollet-le-Duc’s restoration and additions? Viollet-le-Duc has both admirers and detractors. For over a century, Viollet-le-Duc’s work was scorned. He restored French heritage in an interpretative way, and people often criticized his work.

In the case of Notre-Dame de Paris, the public and experts blamed Viollet-le-Duc for his restoration work, criticizing him for copying only the 13th-century cathedral, alienating the building’s older past. People should bear in mind that when he began the restoration, the building had been left to decay for over a century. They did urgent work so it would not collapse. The available historical sources at his time were not equivalent to today. Unlike his predecessors, Viollet-le-Duc tried as much as possible to work with materials used by medieval builders. Furthermore, his extensive research and countless drawings allowed him to acquire considerable knowledge about medieval architecture. He based his work on this knowledge to achieve a result worthy of medieval splendor, at least in his opinion.

Viollet-le-Duc should not be seen as an architect who only made up elements and details that never existed, driven only by his imagination. While discovering Italy, Eugène explained in a letter to his father that before changing or embellishing monuments, the architect should carefully study architectural elements of the past with an objective eye. It perfectly sums up his thirst for knowledge. It was only during the 1980s that Viollet-le-Duc’s methods and the 19th century, in general, were partly rehabilitated.