HomeStoriesHere’s How Honoré Daumier Was a Satirical Realist Lithographer

Here’s How Honoré Daumier Was a Satirical Realist Lithographer

Honoré Daumier’s political satire exemplified not only the tone of the Realist movement but the overarching distaste towards the Monarchy of the French people during the time. 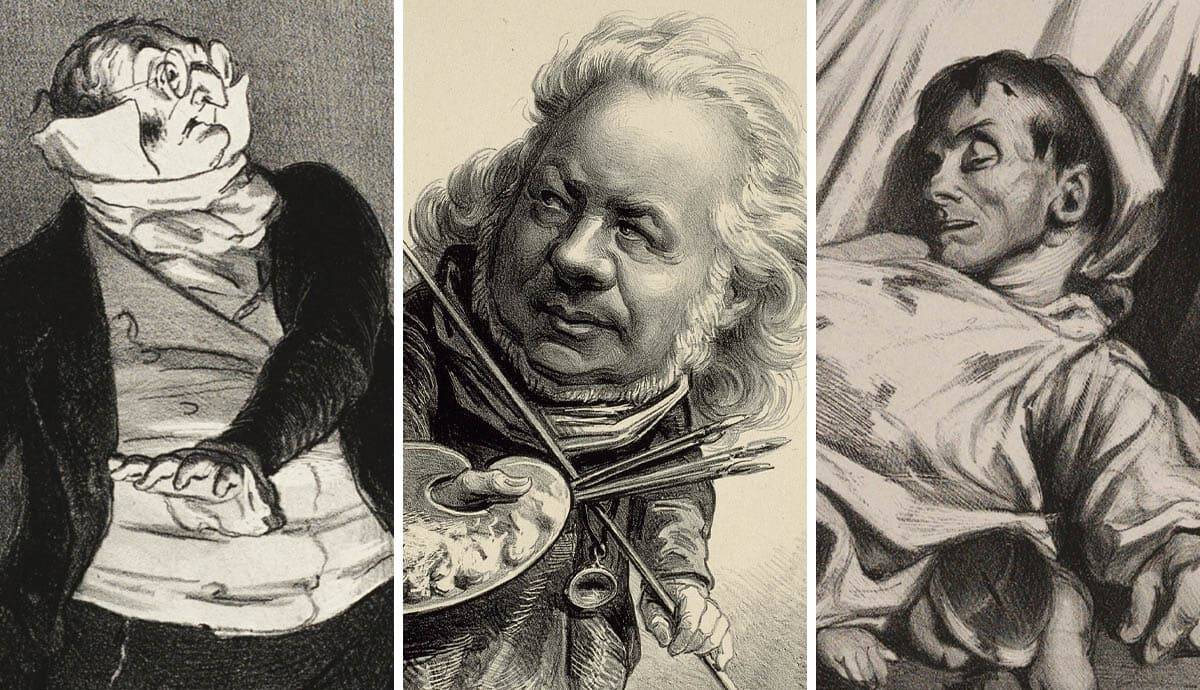 Honoré Daumier took it into his hands to spread the honest truth about the world around him. As an artist who came into himself during the Realist movement, it was inevitable that he too would take up proverbial arms against oppressors, as he grew up watching the gap between the wealthy and poor grow bigger and bigger. His own family was a by-product of the July Monarchy, and he too grew up without an excess of wealth. In addition, he was able to create during the era of publication allowing his work to sicken, inspire, and outrage a larger number of people than ever before. His lithographs were his rebellion against the government and everything that it stood for.

In the Realist Manifesto (1855), written by Gustav Courbet, it was said that the goals of an artist were to translate the customs and ideas of the era and show the ways in which the artist perceived them. Courbet was the leading advocate of Realism and believed that painting was a concrete form of art, and should only show representations of real and existing things. He tended to emphasize the life of the impoverished, from young to old, in order to suggest that during this era if you are born impoverished it was predetermined you would die as such.

A fine example of such is Courbet’s piece The Stone Breakers, an extremely concrete piece that accurately conveys the subject matter in an almost photo-realistic manner, without any sensationalism or romantic landscapes, which the artist avidly despised. His intense attention to detail really shows how laborious and intense the job was. It was thankless and dangerous. Stone-breaking involved breaking stones and rocks in order to get materials, to pave roads for example.

Regardless of how important the job was, the workers were still paid very little and were impoverished from youth to old age. Their tattered clothing and insufficient lunch that sits in the dirt on the roadside that they’ll have to eat in the blazing sun vividly gives insight into the lives that these two and those like them led. This painting is a critique of the July Monarchy and emphasized how Louis-Philippe’s policies were creating a bigger gap between the rich and the poor.

What Was the July Monarchy?

The July Monarchy was an important phase in French history because of the rise and expansion of the middle class as well as the beginning of socialism in France. Socialism is a political ideology that initially focused on the poverty brought about during the industrial revolution and the capitalist system it brought about.

In the summer of 1830, Louis-Phillipe was crowned the “King of the French” and it wasn’t by divine right like his predecessors. He was made king due to popular acclaim. His eventual downfall stemmed from the government’s failure to attend to the needs of the impoverished lower classes, most notably the would-be growing urban working class. During this time, the explosion of printed images, from books to newspapers, and magazines did not go in Louis-Phillipe’s favor. Not only was the written word becoming more accessible but art too represented something that even the illiterate could understand.  The fall of the monarchy was inevitable. People like Honoré Daumier were now able to spread not just their opinion on socio-economic policy, but the facts as well.

On Honoré Daumier and His Artistic Journey

Honoré Daumier, a native Marseillais, was the son of an ambitious glazier and frame maker. He aspired to be a poet and moved his whole family to Paris for all of his exploits to fail. Due to his negligence, Daumier ended up working as a book dealer’s assistant and he ran errands for firm attorneys at the age of twelve. As a young teenager, Daumier began to show an affinity towards drawing, but due to a lack of funds in his household, he was unable to get formal training.

However, considering the direction his work went in, and how innovative it was, it can be said his lack of formal training was fortunate. Honoré Daumier took it upon himself to practice sketching sculptures at galleries and attended Academie Suisse. It is said that by the age of fourteen, the artist began experimenting with lithography. His technical training came from working at a commercial printer at the age of seventeen.

From 1829, onward, he began producing his own lithographic caricatures and imitated the styles of popular artists such as Nicholas-Toussaint Charlet (1792-1845), Charles-Joseph Travies (1804-1859), and Henry Monnier (1799-1877), France’s best-known caricaturist. Despite this, he remained unrecognized during a period where the art world was saturated with Realist artists. However, what eventually made Daumier stand out as a lithographer was his innovative use of satire, comic genius, and penchant for monumental stylization, which is what made him such a popular political satirist.

Together with Charles Philipon, who published humorous journals that featured political caricatures and social satire, Honoré Daumier developed the most satirical emblem of the July Monarchy: la poire (the pear). Charles Philipon was the director and main writer for La Caricature in 1830 but was soon forced out of business due to the treasonous nature of the imagery of Louis-Philippe. Daumier’s pears were based on a sketch by Phillipon where he depicted Louis-Philippe with accent jowls.

With continued adjustments, the king’s face began to look like full-blown pears, which you can see in the progression of the sketches above. The depiction of the king as a poire was taken as such an insult because the imagery around the pear is owed to its potency to its slang meaning: moron which caught on very quickly with the monarchy and aristocracy. The same year the advent of Masks of 1831 and more depictions of dirty politicians and King Poire were published.

Honoré Daumier’s lithograph, Masks of 1831, was posted in La Caricature and displayed Louis Phillipe as a “phantom poire” surrounded by his newly appointed ministers. One way of interpreting the phantom poire is that Louis was no more than a figurehead: faceless, voiceless, and completely out-ruled by his ministers. The ministers are depicted as masks to convey their true selves. Honoré Daumier emphasized the hypocritical nature and deceitful ways of those who ruled in the name of the king by displaying them as masks and not men. Masks of 1831 is very much a representation of his early work which almost exclusively featured portraiture. Daumier did not only create caricatures for Philipon but also made a point to create political cartoons like Gargantua.

Daumier created political cartoons with malicious intent that Philipon and, on occasion, Daumier were accused of libel and were summoned to appear in court. All of this happened before the reintroduction of censorship in 1835. Daumier and Philipon actually ended up imprisoned and it was for the lithograph above, Gargantua. This lithograph is packed full of insults and critiques against the crown, the government, and how it was run. Louis-Phillip and other government officials were so insulted by the piece that La Caricature was even banned due to it.

Honoré Daumier disliked the idea that the state is the king, as per the thoughts of Louis XIV, and decided to convey that by making Louis-Philippe a disgustingly overweight creature who is engaging in defecation and gluttony. Louis-Philippe’s pear-headed countenance is swallowing bags of money that was taken from the poor by his ministers. The poor are depicted at the foot of the plank handing one of his ministers what little wealth they have. The heavy-bodied giant sits atop something that seems like a chair but is actually a toilet of sorts. Daumier is crudely stating how recklessly Louis-Philippe gave out positions of state. In the inscription, it states that the documents that the king is defecating are letters of nomination and appointments to special government positions.

At the bottom of Louis-Philippe’s posh toilet, there are little fat “favorites” who collected the items that fall from Louis-Philippe in contrast to the starving and thinner lower class people on the right. Gargantua is a shining example of the government spending money on itself, even going so far as to give the king a salary, and never on the people. Louis-Philippe’s salary was more than eighteen million francs, which was thirty-seven times the amount of Napoleon Bonaparte, and almost one-hundred-and-fifty times the amount of the US president.

The Association Mensuelle published the lithograph, Rue Transnonain, April 15, 1834, which conveys the events of April 15, 1834. The government was unable to stop its publication because it was not inherently debasing, even though the lithograph itself is a critique of the government and the actions of the French soldiers on this day. In an attempt to hide their actions and avoid accountability, the French government purchased as many of the periodicals that it appeared in, in order to destroy the sad and disturbing image.

To give some context, a rioter shot a well-known army officer and as revenge, the soldiers went from home to home indiscriminately killing everyone. The people, the republicans, and socialists began rioting against the July Monarchy. The government sent troops to quiet the rioting which ended in a bloodbath instead. The night became known as The Rue Transnonain Massacre.

Honoré Daumier’s lithograph was inspired by Romantic painter Francisco Goya’s painting The Execution of the Rebels on the Third of May,1808. Daumier even made a point to date his piece in the title just like Goya. The work gives off the same sense of helplessness. Unlike Goya, Daumier stuck to ambiguity when it came to the soldiers in his lithograph but still showed their overwhelming, indiscriminate executions. The middle subject is a father, crushing his baby, while to the left lies his dead wife and to the right, perhaps, his elderly father. The soldiers, at the whim of the government, had no qualms about massacring entire families to quiet the unrest instead of just listening to and helping people.

Goya made it extremely clear that they could not be protected by their government nor their soldiers, they were on their own and they had to take action, or they would continue to be impoverished and killed at the whims of the government. The people in the lithograph were not even rioters, they were just a family of people who were killed when the soldier decided to open fire on a building during this tragic event.

10 Famous Lithographs You Must See