These six buildings, all famous examples of the Gothic Revival, pay tribute to the Middle Ages, or at least modern ideas of it. 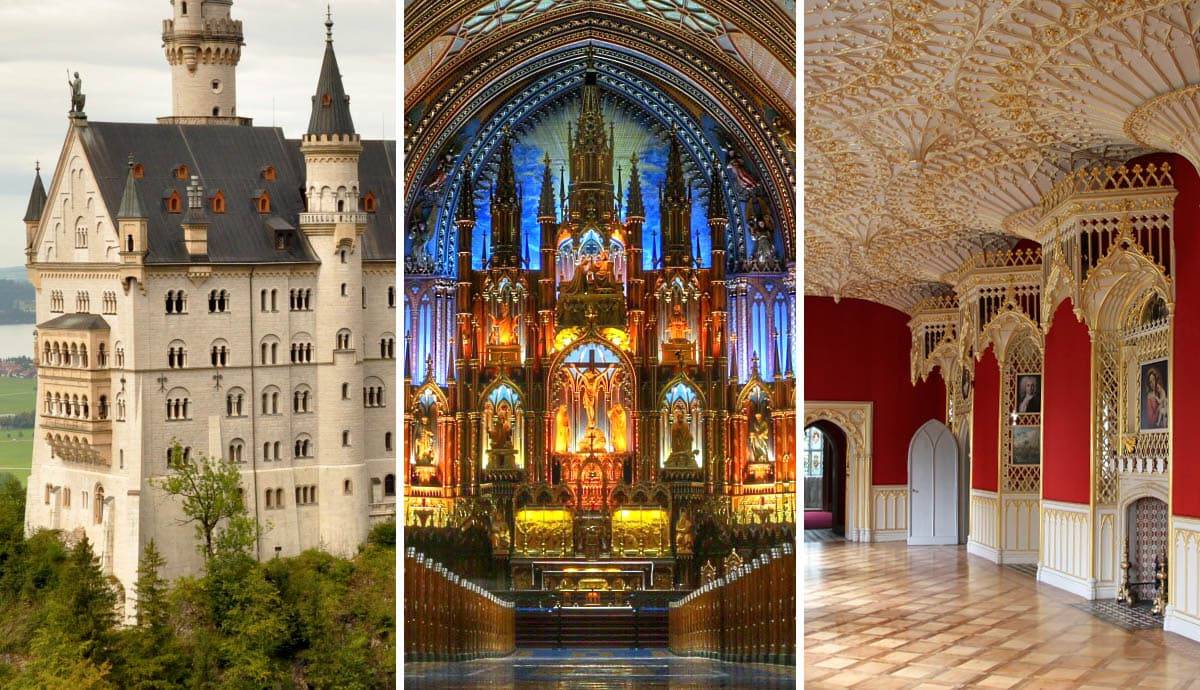 From 18th-century England to 19th-century Germany and 20th-century America, the Gothic Revival began in Britain but quickly spread across the world. These six buildings in five countries show many diverse sides of the Gothic Revival. Whimsical homes, fairytale castles, dignified churches, and even train stations, the buildings in this article demonstrate six different ways to evoke the Middle Ages in the modern era. Read on to learn more about Gothic Revival Masterpieces.

Located in a suburb of London, Strawberry Hill was the home of English author and politician Horace Walpole (1717-1797). Walpole was a Gothic enthusiast before it was fashionable. His The Castle of Otranto, written while residing at Strawberry Hill, was the world’s first Gothic novel, a horror story set in a foreboding medieval castle. He was also a great collector of medieval artifacts, and he commissioned his very own Gothic Revival castle to house them.

Unlike the sublime, threatening castle of his novel, Strawberry Hill is a cozy, picturesque fantasy. It’s a rambling building punctuated with pointed or ogee arched windows, quatrefoils, crenellations, and towers. On the inside, the structure is filled with Gothic decorative details like elaborate fan vaults, blind arches on the wood paneling, and lots of gilt tracery patterns. Genuine Medieval and Renaissance stained glass fills the windows. Specific details of surviving Gothic buildings inspired Strawberry Hill’s motifs, though these designs were often adapted to far different contexts from the originals. For example, the design of a Gothic choir screen might become a bookcase, or elements of a Gothic Revival chimney might be inspired by something seen on a medieval tomb.

Walpole was an influential tastemaker, and his home did almost as much to popularize the Gothic Revival as did his novels. Strawberry Hill was one of the very first Gothic Revival houses, and it helped to set the fashion for British people of means to build their own fake castles or monastery homes. Walpole’s collection of medieval art was disbursed after his death, but Strawberry Hill remains. Recently restored to the way Walpole would have known it, as extensively documented through contemporary writings and artworks, the house is open to visitors.

Notre-Dame de Montreal is a Catholic cathedral in Montreal, Quebec. It was Canada’s first Gothic Revival building. The nation would later acquire numerous others, including the Parliament buildings in Ottawa. The original church was established by a religious order called the Society of Saint Sulpice in the early 1640s, at the same time as Montreal’s foundation. The current church was designed by New York architect James O’Donnell (1774-1830) and built in 1824, though the towers and decoration took several more decades. It replaced the original Baroque church that had become too small for an expanding congregation.

Although Montreal is in French Canada, Notre-Dame de Montreal takes a decidedly English approach to the Gothic Revival, with double galleries, relatively low vaults, a horizontal emphasis, and a square choir. The entry façade, with its symmetrical square bell towers, trio of arched portals, and location facing a plaza may call to mind Notre-Dame de Paris (though with different proportions), but its resemblance to the more famous cathedral ends there. The interior decoration, extensively revised in the late 19th century, pays tribute to the Sainte-Chapelle in its profuse painting and gilding.

The interior focal point is a massive, Gothic Revival carved wooden altarpiece that includes sculptures of the Crucifixion, Coronation of the Virgin, and other religious figures within pointed arch-shaped niches with elaborate pinnacles. The cathedral also has early-20th century stained glass windows depicting episodes from the early settlement of Montreal and the establishment of the first version of Notre-Dame de Montreal. They were commissioned to celebrate the Gothic Revival structure’s centennial in the 1920s. Very much an active church, Notre-Dame de Montreal is an important site for weddings and funerals, as well as concerts and light shows. However, many people know it best as the site of Celine Dion’s wedding ceremony.

The Palace of Westminster: Gothic Revival and British National Identity

The current Palace of Westminster, home to the British Parliament, was constructed starting in 1835/6 to replace the medieval structure lost to fire in 1834. Charles Barry and Augustus W.N. Pugin won the commission to design the new complex in a competition that required a Gothic or Elizabethan aesthetic. Barry (1795-1860) was the main architect, but he was better known for his classicizing constructions. By contrast, the enthusiastic young Pugin (1812-1852), who was principally responsible for the elaborate decorative scheme, would become the Gothic Revival’s foremost proponent. He designed Westminster’s interior down to the tiniest details of carvings, stained glass, encaustic tiles, metalwork, and textiles. Pugin put ornaments everywhere, but he did so thoughtfully and with purpose.

The choice of Gothic Revival, specifically late Gothic, harmonized with the surviving surrounding buildings, such as Westminster Abbey and Hall. However, it also reflects the perceived connection between the Gothic style and the glory of Medieval Britain. Accordingly, the interior décor prominently features heraldry, symbols of the British monarchy and its dominions, patron saints of the kingdom, and motifs from Arthurian legend.

Mural paintings and statues by a selection of prominent British artists depict monarchs, Prime Ministers, and scenes from British history and literature. For example, William Dyce’s frescoes in the Royal Robing Room portray episodes from Le Morte d’Arthur. The use of Gothic Revival is typically associated with a pro-monarchy view, but fittingly, this meeting place for Parliament depicts a cross-section of events, including the English Civil War and the creation of the Magna Carta. Sections of the Houses of Parliament, particularly the House of Commons chambers, had to be rebuilt or restored after World War II, as the building took numerous hits during the Blitz.

King Ludwig II (1845-1886) was the ruler of Bavaria until it was conquered by the Prussians in the Austro-Prussian War. To cope with the indignity of being forced into a subordinate role, he retreated into a fairytale version of absolute monarchy. To that end, he commissioned three castles, including the now-iconic Neuschwanstein Castle. Ludwig was a huge fan of German composer Richard Wagner, and Neuschwanstein was supposed to be something out of Wagner’s operatic visions of medieval Germany, such as Tannhäuser and the Ring cycle. The castle has also been seen as an idealized recollection of Ludwig’s childhood since his father had also been a patron of fantasy castles.

Although nominally Gothic Revival, Neuschwanstein’s exterior recalls the solidity of the Romanesque more than the airy vaults of the Gothic. Inside, the décor references multiple visions of the Middle Ages; Ludwig’s bedroom is Gothic, the throne room is inspired by Byzantium’s Hagia Sophia, and the Romanesque minstrels’ hall re-creates a setting from Tannhäuser. Paintings throughout the castle depict scenes from Wagner’s operas. So great was Ludwig’s commitment to the Wagnerian fantasy that he hired theatrical set designers to work at Neuschwanstein. Ludwig’s medieval vision, however, did not extend to a Medieval standard of living. Neuschwanstein included central heating, hot and cold running water, and flushing toilets from the very beginning. Unfortunately, the castle was incomplete at the time of Ludwig II’s suicide in 1886, just after he was declared insane and committed by the state. The towers were added after his death, and the interior was never fully finished.

Due to its associations with absolute Germanic power, Neuschwanstein was appropriated by the Nazis (as was Ludwig’s beloved Wagner). It was one of the locations where Allied forces found caches of stolen art after the war. On a more positive note, Neuschwanstein was also Disney’s inspiration for Cinderella’s Castle. Neuschwanstein was first open to tourists soon after Ludwig’s death, and it remains so today. Although not Medieval at all, it is one of the most popular “Medieval” castles in all of Europe.

Gothic Revival architecture abounds in the city of Mumbai, India. It’s the legacy of British colonial rule in India, particularly in the Victorian era, when British rulers wanted to build up the area into a European-style port city and commercial center. In fact, Mumbai (then Bombay) was once known as the “Gothic City” for this very reason. Surviving buildings in this style include the University of Bombay, court buildings, and the church of St John the Baptist, but Chhatrapati Shivaji Terminus is the most famous.

As a train station, the terminus is an example of the Gothic Revival being used for a decidedly non-Medieval building type, as is also the case with the more famous St. Pancras Station in London. The Terminus’s Victorian-Indian Gothic Revival mode combined iconic Italian Gothic motifs, including tracery, stained glass, and polychrome masonry, and traditional Indian elements, like cusped arches, and turrets, Islamic-style domes, and carved teak wood. Architect F.W. Stevens worked with Indian engineers Sitaram Khanderao and Madherao Janardhan, as well as Indian craftsmen, to create this fusion. The building even has a suite of gargoyles and other carvings depicting local plants and animals; they were carved by students at the nearby Sir Jamsetjee Jeejebhoy School of Art. This marriage of Gothic and Indian architectural elements may have been intended to visually reinforce the legitimacy of British rule in India.

Although the use of the Gothic Revival in Mumbai can be seen as a symbol of British imperialism, an attempt to Christianize and Westernize India, the Chhatrapati Shivaji Terminus remains a celebrated building in post-colonial India. It is particularly admired for its successful fusion of European and Indian aesthetics. Along with an array of other Gothic Revival and Art Deco buildings in Mumbai, the station is now a UNESCO World Heritage site. It is one of the nation’s major transportation hubs. Named Victorian Terminus when completed in 1888, the Terminus was renamed in 1996. It now honors a 17th-century Indian ruler associated with the fight for independence.

The Washington National Cathedral is the Episcopal cathedral of Washington D.C. and also the United States’ official national church. Although the United States government is officially separate from all religions, the cathedral is still the site of Presidential state funerals and other such ceremonies. Martin Luther King Jr. preached there shortly before his assassination. Begun in 1907 and completed in 1990, the long duration of its construction would rival many genuine medieval cathedrals.

With large windows, a transept, an English-style rib vault with decorative extra ribs, and flying buttresses, George Frederick Bodley and Henry Vaughan’s Gothic Revival church takes a very traditional approach to Gothic. Like the great medieval Gothic churches, Washington National Cathedral abounds in stained glass and carvings. Here, these decorative elements adapt Gothic art forms to 20th-century American iconography rather than imitating medieval antecedents. In particular, the cathedral’s 112 gargoyles and grotesques retain the weird and quirky spirit of Gothic gargoyles but feature modern imagery. One even depicts Darth Vader! Some of the gargoyles, including Darth Vader, were designed by ordinary Americans of all ages through design contests. Interior sculptures depict U.S. Presidents as well as people like Mother Teresa, Helen Keller, and Rosa Parks.