American artist Frederic Edwin Church’s greatest landscape may not be a painting at all. Many believe it’s the real-life scenery he designed at Olana, his Hudson, New York estate. 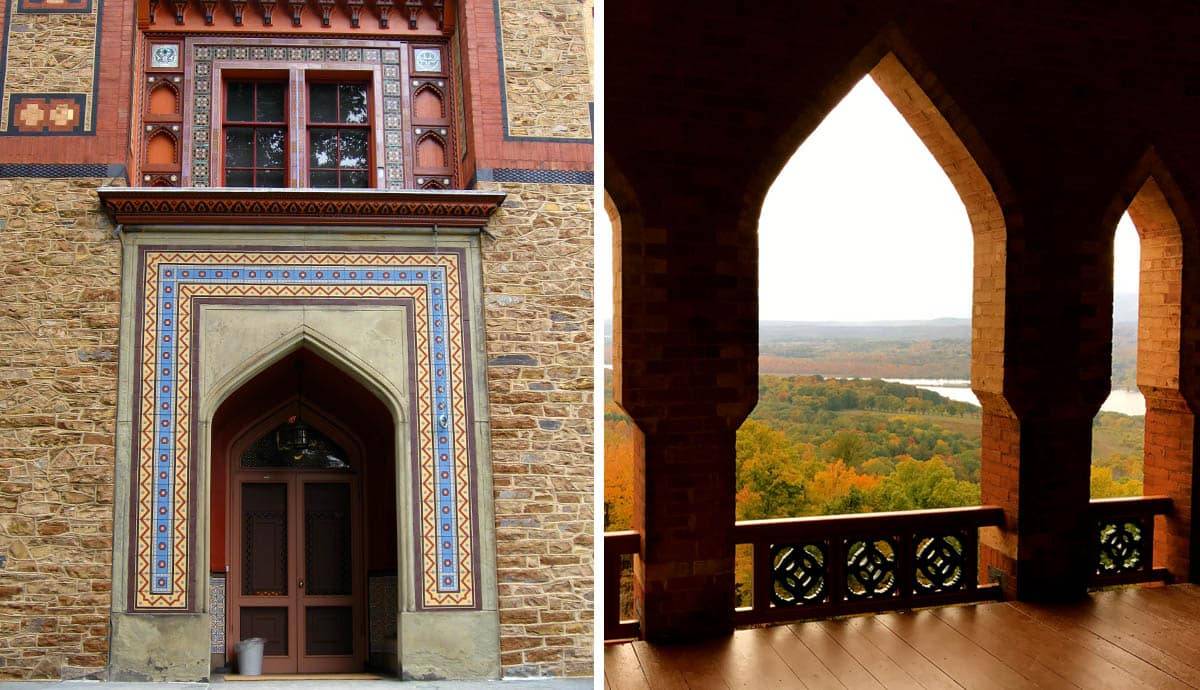 Hudson River School painter Frederic Edwin Church purchased a large piece of farmland in upstate New York in 1860. Several years later, Church and his wife transformed it into an artistic and cultural retreat. The eclectic, Persian-inspired villa, lush landscaping, and sweeping views were all designed by the artist himself. Many scholars consider Olana to be the culmination of Church’s career, an immersive, three-dimensional storehouse of everything he had learned through a lifetime of art and travel.

Frederic Edwin Church bought 125 acres in Hudson, New York, not far from the former home of his mentor, Thomas Cole, shortly before his marriage to his wife, Isabel. It’s likely that he chose it for its grand views from the very beginning. The property would later amount to 250 acres, including the steep hill on which the home was eventually sited. The Churches initially inhabited a modest cottage on the property, designed by Beaux-Arts architect Richard Morris Hunt.

It wasn’t until the late 1860s, after the Churches had weathered the Civil War, traveled Europe and the Middle East, and lost two young children, that they created Olana. This elaborate home, whose name refers to an ancient Persian castle, was inspired by their recent trip to the Holy Land. They had visited Jerusalem, Lebanon, Jordan, Syria, and Egypt. Both deeply religious people, Frederic and Isabel Church have been seeking to bring a little bit of Jerusalem home with them. Although the Churches were devout Christians, they felt no hesitation to base their house on Islamic precedents.

The home and studio at Olana represent an eclectic Victorian take on Islamic or Persian art and architecture. Picturesquely sited on the summit of a hill, Olana is an asymmetrical building with a central courtyard (enclosed in deference to New York climate), lots of balconies and porches, and a tall bell tower – all characteristic Middle Eastern attributes. Both the interior and exterior are covered in exuberant decoration designed by Frederic Edwin Church himself and approved by his wife. We still have his working sketches. Some of it was inspired by what the Churches had seen on their travels, while others relate to popular pattern books. Colorful flowers, geometric patterns, pointed and ogee arches and Arabic script fill nearly every available surface. These patterns appear in the floor and wall tiles, on the wallpaper, carved and painted into the woodwork, and more.

Frederic Edwin Church evoked Middle Eastern-style window screens by adding elaborate paper cutouts to amber glass windows. In keeping with Islamic traditions, the decoration of Olana is non-figurative, though the art on display within it is not. For assistance in turning his vision into a reality, Church partnered with architect Calvert Vaux (1824-1895), who is best known as the co-designer of Central Park. There are no clear answers about exactly how much of the home and grounds should be attributed to Vaux and how much to Church.

Olana is filled to the brim with the art and antiquities that the Churches acquired on their travels. The collections of South American and Persian art are particularly vibrant, although objects from Europe and Asia also appear. The home also contains Church’s art collection, comprised of minor old masters and works by his fellow American landscape painters. Because Olana remained unchanged for so long all of the Churches’ furnishings, books, collections, and personal possessions still inhabit the house. That’s why Olana contains so many significant Frederic Edwin Church paintings and sketches. The most famous is El Kahsné, a striking composition depicting the famous archaeological site in Petra, Jordan. Church painted it for his wife, who had not accompanied him to this dangerous area, and the work still hangs above the family fireplace.

Although the home and studio at Olana are elaborate and artful, they’re not really the main event. That honor would go to the grounds and viewshed (views beyond the property), which have been seen as Frederic Edwin Church’s most masterful artwork of all. As a landscape painter, there’s no question that Church designed his own property with a view toward cultivating painting possibilities. He certainly picked the perfect site on which to do this. From the house on high, there are 360-degree views that reach into Massachusetts and Connecticut.

The vistas include the Catskill and Berkshire Mountains, the Hudson River, trees, fields, and even weather and cloud formations in the broad stretch of the sky above the lower-lying areas. The beauty of Olana’s hilltop site is that the viewshed encompasses a much broader area than Frederic Edwin Church actually owned. It’s difficult to tell where the property ends and the rest of the world begins, but it doesn’t really matter. Church took the concept of viewsheds even further by strategically positioning Olana’s numerous large windows and balconies to frame and highlight the best views, curating the sights for visitors. Once ensconced at Olana, the former world traveler did not have to leave home to find subject matter. He enjoyed a deep well of commanding views from his windows that he captured in thousands of paintings and sketches.

Frederic Edwin Church composed his physical landscape in much the same way he would one of his paintings, creating a foreground, middle ground, and background for every vista. On 250 acres he actually owned, he did some serious landscape design to create these compositions. In addition to the working and non-working farms, he added winding roads, orchards, parkland, a kitchen garden, woodlands, and an artificial lake. He carefully situated five miles of roads to set up the views he wanted people to see from them. Traveling down a pathway inside a densely wooded area, you might suddenly find yourself looking out across a broad, descending stretch of grass that reveals a sweeping view across miles of the landscape below.

Frederic Edwin Church even designed benches, reproductions of which now serve in their place, from which to contemplate the most impactful scenery. Church’s landscape interventions could be quite significant, necessitating dynamite on occasion. In recent years, the Olana Partnership, a non-profit organization that currently maintains Olana, has fought serious battles to preserve Church’s viewshed against threats of development far beyond Olana’s official boundaries. It has also worked to return the landscape within the property to its original design and to re-establish its farm.

The Fight to Save Frederic Edwin Church’s Olana

After the deaths of Frederic and Isabel Church, their son and daughter-in-law inherited Olana. Louis and Sally Church maintained the home and grounds very close to their original condition. They also preserved much of Church’s art and papers, though they donated some of his sketches to the Cooper Hewitt. Unlike many other historic homes in the United States, Olana still has all its original contents.

After the childless couple died, Louis in 1943 and Sally in 1964, the closest Church heirs were more interested in a lucrative sale than in preserving the family legacy. About a hundred years after its creation, Olana was in real danger of being demolished and its contents auctioned off. Why? Because nobody cared about Frederic Edwin Church anymore.

Frederic Edwin Church, like many other 19th-century artists, had been forgotten and devalued amidst the 20th century’s modernism madness. The blatant Victorianism of Olana didn’t help its esteem, either. Luckily, though, not everybody had forgotten, David C. Huntington certainly hadn’t. An art historian who had chosen to specialize in Church when it was deeply unfashionable to do so, Huntington mounted a campaign to save Olana. One of the few scholars to have visited at this time, Huntington was struck by the home’s original state and the wealth of information surviving inside it. It was clear to Huntington that he needed to preserve Olana in some fashion. His first plan was simply to record it and its contents for posterity, but he quickly started campaigning to create a foundation that could purchase it instead.

Huntington used his contacts in the museum and cultural worlds to raise awareness and support for his cause. Although his committee did not raise enough money to buy Olana, its efforts are undoubtedly the reason the estate was eventually saved.  For example, their advocacy sparked a major article in Life magazine’s May 13, 1966 issue, entitled A century-old refuge of art and splendor: Must this Mansion be destroyed?. There was also a slew of publications and exhibitions that raised Church’s public profile around this time.

It was the State of New York that finally purchased Olana and its contents in 1966. Frederick Edwin Church’s self-designed mansion and grounds have been a New York State Park and popular tourist attraction ever since. Frederic Edwin Church’s refuge is now a paradise for countless visitors. With tours of the villa, acres of nature to enjoy, and educational programs about Church, the Hudson River School, and environmental preservation, it’s well worth a visit.

How the Fourth Crusade Was Aimed at Jerusalem but Hit Constantinople