Frederic Edwin Church was the most famous member of the 19th century Hudson River School in the United States. Here are some of his masterpieces. 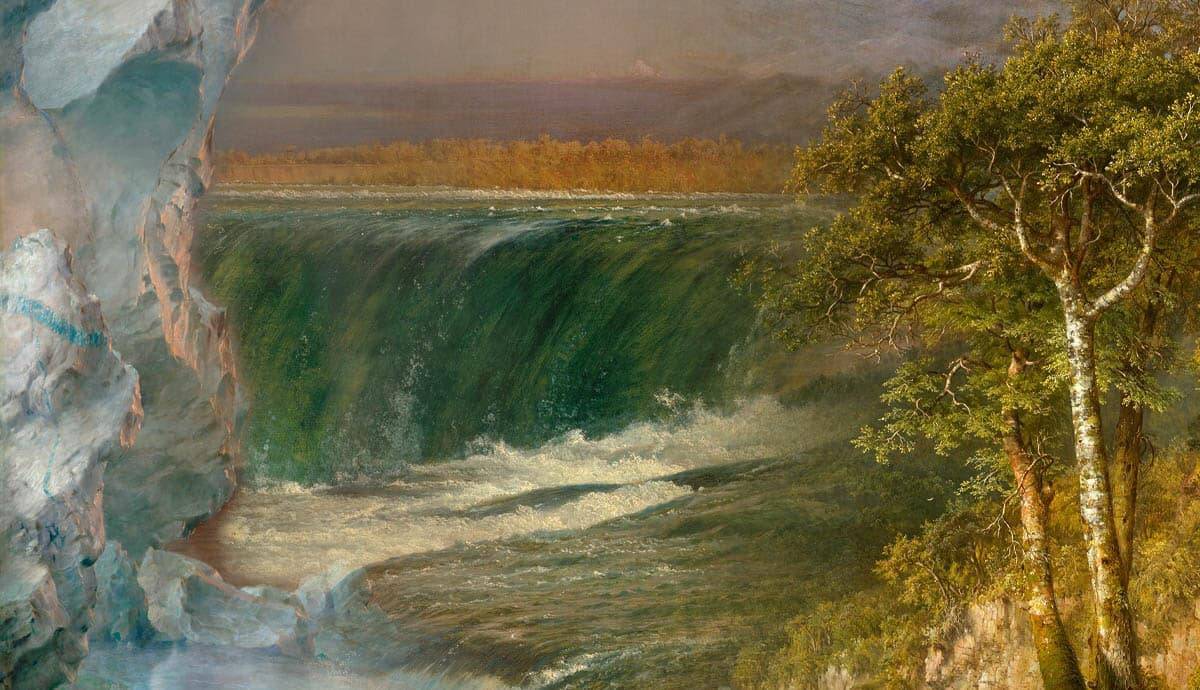 Frederic Edwin Church (1826-1900) was 19th-century America’s most successful artist, and possibly the nation’s first artist celebrity. Born and raised in Connecticut, he was a member of the Hudson River School, which turned landscape painting into an expression of national identity. Church was the only pupil of the unofficial Hudson River School founder Thomas Cole (1801-1848). However, he went above and beyond his fellow American landscape painters by elevating his work to an international blockbuster event.

In addition to painting the American northeast, Frederic Edwin Church was a consummate world traveler. He visited South America, Jamaica, the Arctic, Europe, and the Middle East. He sketched, painted, and studied the scenery as he went. After returning home to New York, he translated his experiences into monumental paintings. A smart businessman, Frederic Edwin Church displayed his works in single-painting exhibitions hosted at galleries in the United States and sometimes Britain. People lined up around the street to view them. The 25-cent admission price also gave visitors access to a pair of opera glasses to see all the paintings’ little details and an explanatory pamphlet.

Church’s art pairs meticulous observation of the natural world with a Romantic sense of the grand and theatrical. The artist faithfully studied and recorded all the details of everything he saw during his travels, but he combined those features into collage-like compositions that do not reflect any single vista in the real world. His art condenses the essence of a place into a single painting, bringing together its noteworthy features for maximum impact. Church’s union of art and science derived in part from his admiration of Prussian naturalist, explorer, and writer Alexander von Humboldt (1769-1859).

Humboldt was an intellectual star, and Church was among countless educated people who avidly read his many published works. Humboldt was as big a fan of landscape painters as Church was of Humboldt. The scientist encouraged painters to study nature in service of their art and also to seek out subject matter beyond the traditional European haunts. Frederic Edwin Church took both these pieces of advice very much to heart. Here are some of his best know works.

Church’s first blockbuster painting depicts a North American natural wonder, Niagara Falls. A series of three waterfalls, Niagara straddles the United States-Canada border in the state of New York and the province of Ontario. It was North America’s first natural attraction, popular with tourists long before white settlers had any idea about the natural wonders out west.

In his panoramic canvas, Frederic Edwin Church was the first artist to depict Niagara on such a grand scale, as well as the first person to convey its appearance with such detail and faithfulness. Additionally, he heightened the drama through his compositional choices. He must have stood safely back from the rushing water to create his many preparatory sketches. However, his final composition gives a very different impression, suggesting that the viewer is standing at the very edge of the water, at risk of getting swept away into the chaos. This certainly adds excitement to the already-dynamic composition and frothy white rapids.

This version of the Niagara scene, which depicts the falls from the Canadian side, attracted more than 100,000 viewers in New York alone. It is now at the National Gallery in Washington D.C. A later Niagara Falls painting by Church – this one an even larger one showing the view from the American side – is now at the National Galleries of Scotland. It is one of only a few Frederic Edwin Church paintings in museum collections outside of the United States.

2. Heart of the Andes

Frederic Edwin Church’s undisputed masterpiece, Heart of the Andes built on the reputation he had acquired from Niagara and took it up several levels. Like that earlier blockbuster, Heart of the Andes is a monumental painting of a New World wonder. This one depicts South America. Heart of the Andes is the result of Church’s two journeys to Colombia and Ecuador in 1853 and 1857. Both trips were inspired by Humboldt, who had visited the region and memorialized it in his magnum opus, Cosmos. Church planned his itineraries to follow in Humboldt’s footsteps. Once back in New York, Church worked his observations into this massive composite painting, which juxtaposes several viewpoints and locations from his travels. By merging diverse Andean ecosystems into a seamless image, Church emulated Humboldt’s scientific illustrations in the grandest possible fashion.

Standing in front of Heart of the Andes is like looking out a window and seeing the Andes unfold beyond you. Early versions of its frame, complete with curtains, were designed to sustain this illusion. The composition is packed with so much detail that some visitors to its sensational debut exhibition reported feeling overwhelmed by it. Unfortunately, one of the few people who didn’t get to see it was Humboldt himself. Frederic Edwin Church had planned to ship the work to the elderly Humboldt in Germany, but the great scientist died just as Church was finishing the final details.

Although Church never returned to South America after the 1850s, he continued to mine his countless sketches from the trip to paint South American scenery for the rest of his career.

3. Twilight in the Wilderness

The artwork Twilight in the Wilderness is smaller and less famous than the previous two paintings, but it’s even more dramatic. The painting depicts a setting in Maine, near Mount Kahadin, but the mountains, trees, and lake take a backseat to the colorful and expressive sky. Streak-like red clouds dominate the dark blue sky and turn the lake below blood red, as the brilliant yellow Sun sets over a distant mountain. The surrounding landscape is shrouded in the falling darkness.

The grandeur of the sunset had long been a favorite motif of Sublime artists, but historical context renders this example particularly poignant. It was painted in 1860, the year before the start of the American Civil War, and most Americans would have already realized that war was on the horizon. Church’s teacher, Thomas Cole, had been a big fan of allegorical landscape painting, designing and populating fictional landscapes to overtly convey messages. Although Frederic Edwin Church did not generally favor this approach, the grander and more emotional motifs of his Civil War-era paintings may reflect his own, subtler take on his mentor’s practice.

After the success of Heart of the Andes, not to mention the taxing travel that preceded it, most artists would have taken it easy for a while. Not Frederic Edwin Church, he took a trip to the Arctic instead, making more than a hundred sketches of icebergs offshore of Canada. The resulting painting, The Icebergs, shows Church at his most Sublime. This large canvas depicts massive icebergs, some tinted an eerie shade of green, surrounding an Arctic sea. There are no signs of human, animal, or plant life, except for the ominous appearance of a broken ship’s mast in the foreground.

Sublime landscape painting gets its power from suggesting the potential for human peril in spectacular scenery. Here, Frederic Edwin Church provided an overt, and all-too-realistic, suggestion that this harshly beautiful location has already claimed lives. The 19th century was the age of Arctic exploration, and real-life adventurers like Sir John Franklin sometimes disappeared in the endeavor. Interestingly, Church did not add the mast until two years after the painting’s United States debut, although it does appear in some of his preparatory drawings.

The Icebergs made their public debut less than two weeks after the start of the Civil War. Ticket sales went to support the Union cause, and Heart of the Andes would later go on view to support Union troops as well. Originally called The North, a title with obvious double meaning, Church changed its name to a more politically neutral The Icebergs for the tour’s British itinerary two years later. He added the broken mast around the same time.

In the midst of the Civil War, Church created Aurora Borealis, another ominous Arctic scene. It was based on the sketches and experiences of his friend Isaac Israel Hayes, an explorer who had been stranded in the Arctic a few years earlier. Rendered primarily in shades of grey, the frigid landscape of Aurora Borealis looks even more desolate than that in The Icebergs, although the presence of an upright ship references Hayes’s successful rescue. The painting’s focal point, however, is the colorful and otherworldly lights dancing across the sky. The Northern Lights are now understood as a scientific phenomenon, but they had all kinds of spiritual and superstitious attributions in Church’s time. This was especially true during the upheaval and uncertainty of the Civil War. As in Twilight in the Wilderness, Frederic Edwin Church added a touch of allegory and contemporary commentary into his war-era landscape paintings.

The Legacy of Frederic Edwin Church

By the end of Church’s life, the popular taste had already moved away from his large-scale, detailed landscape paintings. Interest in Church’s art quickly declined after his death and remained that way for several decades. Fortunately, a subsequent reassessment in the second half of the 20th century brought him back into the esteem he deserves. Paintings by Frederic Edwin Church, minor, monumental, domestic, and exotic, can be enjoyed at many art museums in the United States, particularly on the east coast. Olana, Church’s self-designed home, is now a New York State Park. Olana owns and displays many of Church’s paintings and sketches, while art historians consider the home and grounds to be Church’s greatest artistic creation yet.