The Hudson River School was the first movement unique to American art. This landscape painting tradition tapped into an important feature of early national identity: pride in the natural scenery. 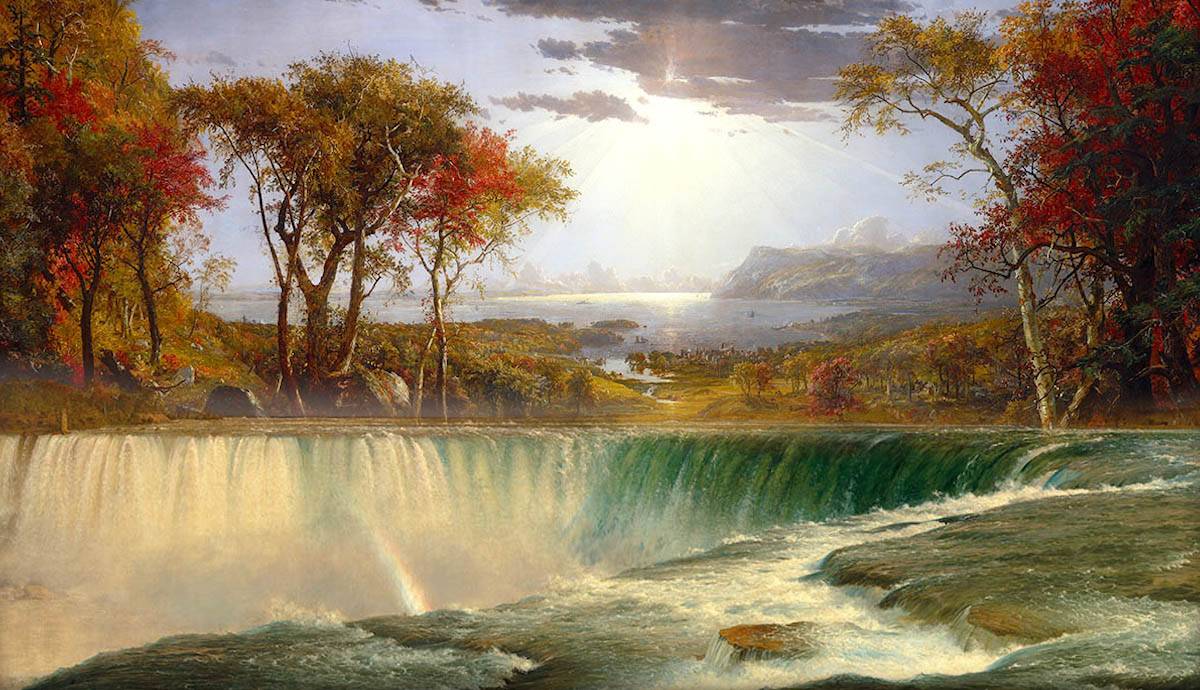 Active for most of the 19th century, the Hudson River School celebrated the American wilderness in landscape paintings of American art. This loose movement depicted ordinary rivers, mountains, and forests, as well as major monuments like Niagara Falls and Yellowstone. The associated American artists painted local scenery for its own sake, rather than as part of a wider narrative. This tied in perfectly with the early American idea that the nation’s wilderness was as worthy of celebration as the very best of what Europe had to offer.

In the late 18th and much of the 19th centuries, the United States of America had a bit of an inferiority complex. Although justifiably proud of its democratic politics and hard-won independence, the new nation felt that it lagged behind Europe in terms of cultural and artistic achievements. Unlike France, Italy, or England, it lacked romantic ruins, impressive monuments, literary or artistic heritage, and dramatic history. At this time, Americans had little interest in the long Native American history that had played out on the lands they now inhabited.

The early years of the American nation coincided with the movements of Neo-Classicism and Romanticism. One valued the order, reason, and heroism of the classical past. The other prized picturesque ruins, high emotion, and the Sublime. Both relied heavily on the history, achievements, and physical remnants of societies that came before them – status symbols the United States found itself lacking. In other words, America seemed like a cultural backwater to both American citizens and European observers.

Soon, however, thinkers such as Thomas Jefferson and Prussian naturalist Alexander von Humboldt (the original United States superfan) identified one major advantage that the North American continent had over Europe – the abundance of its wild and beautiful nature. In most European nations, inhabitants had been exploiting and generally altering the natural landscape for centuries. Areas of true wilderness were few and far between.

The Americas, on the other hand, abounded in wilderness, with existing human interventions on a much smaller scale. The United States had sweeping forests, rushing rivers, clear lakes, and abundant flora and fauna, not to mention sensational natural monuments. The United States may not have the Roman colosseum, Notre-Dame de Paris, or the works of William Shakespeare, but it did have Natural Bridge in Virginia and Niagara Falls in New York. Here was something to celebrate and take pride in. It’s no wonder that artists followed along, memorializing this wilderness in paint on canvas.

Despite its name, the Hudson River School was more of a loose movement than any sort of cohesive entity. There were several generations of Hudson River School painters – mainly men, both also a few women – from roughly the 1830s until the turn of the 20th century. Although earlier American painters had depicted their local environment, consensus names British-born painter Thomas Cole (1801-1848) the movement’s true founder. Except for making landscape paintings of the American scenery, the associated artists did not share any common style or subject matter. Many lived and worked in the northeastern states, specifically the titular Hudson River Valley in New York. Most participants also painted abroad.

Cole was the only Hudson River School artist to include narrative and moralizing elements in his landscape, resulting in dream-like paintings such as The Architect’s Dream and The Course of the Empire series. Asher Durand painted in meticulously observed detail, often filling his works with dense vegetation. Frederic Edwin Church, Cole’s only official student, became famous for monumental paintings of dramatic scenery that he saw on his world travels, such as Niagara and Heart of the Andes.

Jasper Cropsey’s colorful renditions of the autumnal foliage, which is particularly vibrant in some areas of the United States, caught Queen Victoria’s attention. A subset of painters called the Luminists was particularly focused on the effects of atmosphere and light, often in marine scenes. Albert Bierstadt, Thomas Moran, and others introduced easterners to the natural wonders of the American West, such as Yellowstone, Yosemite, and the Grand Canyon.

Hudson River School artists had a few other things in common, however. All were keen to observe nature, and most considered ordinary forests, rivers, and mountains worthy subjects for their own sakes, rather than as vessels for a larger narrative. As such, this American art movement paralleled a contemporaneous French movement. The Barbizon School, made famous by the likes of Camille Corot, also prized en plein air painting and rejected narratives or moral lessons as necessary in landscape paintings. However, Hudson River School paintings are rarely faithful snapshots of places as they actually appeared. In fact, many are composites of multiple related areas or vantage points.

In 1836, Thomas Cole wrote Essay on American Scenery, which was published in American Monthly Magazine 1 (January 1836). In it, Cole argued for the psychological and spiritual benefits of experiencing and enjoying nature. He also justified, at length, America’s pride in its landscape, detailing how specific mountains, rivers, lakes, forests, and more compared favorably to the most celebrated European counterparts. Cole’s belief in the human benefits of enjoying nature, though antiquated in its deeply moralizing tone, still resonates strongly with 21st-century ideas about mindfulness and the value of returning to nature.

Even at this early date, Cole already lamented the increasing destruction of the American wilderness in the name of progress. Yet although he chastised those who despoiled nature “with a wantonness and barbarism scarcely credible in a civilized nation”, he clearly saw it as an unavoidable step in the nation’s development. Nor did he go quite so far as to put the American wilderness on par with man-made European culture, as Humboldt and Jefferson did.

Rather than believing that the majesty of the American landscape made it worthy of unqualified celebration, he instead suggested that it be viewed in terms of its potential for future events and associations. Seemingly, Cole couldn’t quite get past the perceived lack of (Euro-American) human history within American scenery. Other American artists, including Hudson River School painters Asher Durand and Albert Bierstadt, also wrote essays in celebration of the native landscape and its place in American art. They weren’t the only ones to pick up their pen to defend the American wilderness.

One might think that citizens would have taken great pains to preserve these wild landscapes they were so proud of. However, Americans were surprisingly quick to dismantle their natural environment in the name of agriculture, industry, and progress. Even in the early days of the Hudson River School, railroads and industrial chimneys quickly encroached on the scenery presented in paintings. Sometimes this happened when the paint was barely yet dry. The despoiling of the American landscape was a great concern for many Americans, and it quickly sparked a scientific, political, and literary movement to counteract it.

The Conservation Movement sprang up in mid-19th-century America to protect natural landscapes, monuments, and resources. Conservationists spoke out against human destruction of the natural environment, such as deforestation, the pollution of rivers and lakes, and the overhunting of fish and wildlife. Their efforts helped to inspire the U.S. government to enact legislation protecting certain species and lands, especially out west. It culminated in the establishment of Yellowstone as America’s first National Park in 1872 and the creation of the National Park Service in 1916. The movement also inspired the creation of New York City’s Central Park.

Prominent members of the Conservation movement included celebrated writers, such as William Cullen Bryant, Henry Wadsworth Longfellow, Ralph Waldo Emerson, and Henry David Thoreau. In fact, a special genre of nature essays came out of this tradition, of which Thoreau’s Walden is just the most famous example. The American nature essay was related to the 19th-century popularity of travel writings, which often described the environment, and to Romanticism’s celebration of nature more broadly. Hudson River School art fits perfectly into this milieu, regardless of whether the artists actively participated in the movement.

It wasn’t just artists and writers who wanted to save the American wilderness. Crucially, the Conservation Movement also included scientists and explorers like John Muir and politicians like George Perkins Marsh. It was an 1847 speech by Marsh, a Congressman from Vermont, that gave the need for conservation its earliest expression. President Theodore Roosevelt, an avid outdoorsman, was another key supporter. We can think of these Conservationists as early environmentalists, advocating for the land, plants, and animals before concerns like trash in the oceans and carbon footprints had entered the general consciousness.

American Art and the American West

American pride in its landscape only increased as the nation pushed further west, discovering spectacular natural monuments like the Yellowstone, Yosemite, and the Grand Canyon. In the middle decades of the 19th century, the government commonly sponsored expeditions to recently acquired western territories. Led by and named after explorers like Ferdinand V. Hayden and John Wesley Powell, these voyages included botanists, geologists, surveyors, and other scientists, as well as artists to document the discoveries. Both painters, notably Albert Bierstadt and Thomas Moran, and photographers, including Carleton Watkins and William Henry Jackson, participated.

Through broad reproduction in periodicals and collectible prints, their images gave countless easterners their first glimpses of the American west. In so doing, these artists helped to inspire western migration and drum up support for the National Parks System. With their towering mountains and plunging cliff faces, these paintings really can’t be topped as examples of the Sublime landscape in American art.

Legacy of the Hudson River School

In their celebration of the landscape in American art, Hudson River School artists had something in common with their 20th and 21st-century kin – contemporary artists concerned about their environment and how we treat it. Their modes have certainly changed. Naturalistic landscape painting is no longer a particularly fashionable artistic genre, and modern artists tend to be much more overt in proclaiming environmental messages. However, the Hudson River School and Conservation Movement ideals about the importance of nature couldn’t possibly be more relevant today.