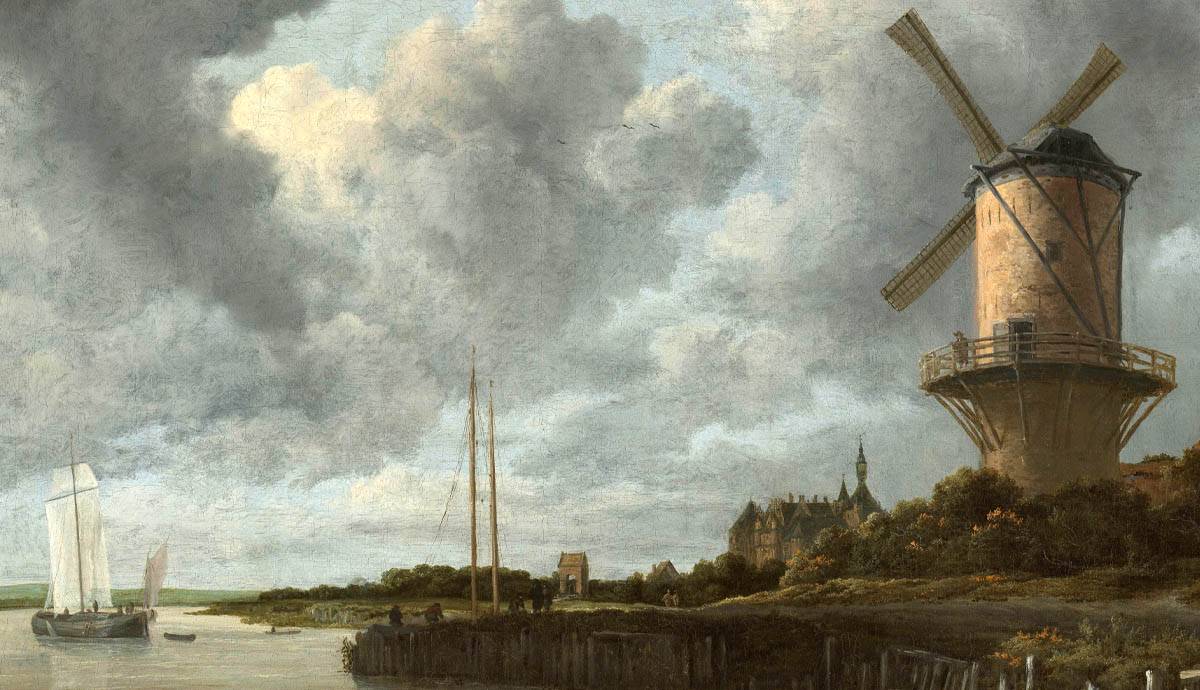 Jacob Isaaksz van Ruisdael (1628/9-1682), a 17th-century Dutch painter, is considered one of the first artists to have made landscape painting into its own genre. Although landscapes had appeared in the backgrounds of earlier paintings, they had not been featured in their own right since classical antiquity. Although Ruisdael did not employ any of the historical or literary content that his contemporaries did elsewhere, his paintings are full of symbolism and meaning. Discover these messages, and how they relate to the ways in which other artists portrayed landscapes elsewhere, through Ruisdael’s celebrated work, Jewish Cemetery.

Ruisdael was one of many now-famous artists who worked during the so-called Dutch Golden Age. (Rembrandt van Rijn, Johannes Vermeer, and Frans Hals were three others.) This was the period in which the Netherlands won independence from Spain and flourished as a prosperous mercantile nation. Because their country was a Protestant republic, without extravagantly-decorated churches or a noble ruling class, Dutch artists did not rely on elite religious or secular patronage like their colleagues in France or Italy. Instead, they painted for an early version of the art market. Their mainly middle-class buyers did not share other Europeans’ interest in highbrow history paintings. Instead, they were more likely to purchase landscape painting, still life, and genre scenes. It’s no coincidence that all these genres flourished during the Dutch Golden Age.

Ruisdael’s French counterparts Nicolas Poussin (1594-1665) and Claude Lorrain (1600-1682) infused their landscape paintings with elements of Biblical stories, classical history, and myth, in order to make them desirable to learned audiences. By contrast, Ruisdael and fellow Dutch landscape painters, including his uncle Salomon Ruysdael, allowed the natural world to take undisputed center stage. They particularly flourished when portraying scenes of the native Dutch landscape, playing into their nation’s pride in its recent prosperity and independence.

In fact, this connection between nationalism and landscape painting would reoccur throughout art history. Common motifs in Dutch Golden Age landscape painting include the Netherlands’ flat topography, windmills, bleaching fields (fields where the dampened cloth was laid out in the sun), and iconic Dutch city landmarks like the church of St. Bavo in Haarlem. While these features don’t have symbolism per se, we should read them as manifestations of Dutch nationalism. However, Ruisdael painted all sorts of different landscape paintings, not just calm scenes of Dutch cities and countryside. He employed all different settings, moods, seasons, and more. He made snowy winter scenes, populated city scenes, paintings of wheat fields, rustic cabins in the forest, ships on the water, old castles, and more.

Jewish Cemetery, one of Ruisdael’s most famous paintings, is full of drama and symbolism. The painting depicts the Beth Haim cemetery, which still exists today, near Amsterdam. However, Ruisdael heavily manipulated its appearance to create a more impactful image. In reality, only the tombs are faithful to those at Beth Haim; all the rest of the scenery was invented. Although the idea of Sublime landscape painting was not yet current – the term wouldn’t even enter common parlance for another century – it’s difficult not to think of that word when faced with this imposing and ominous painting. It’s no wonder that Ruisdael became an inspiration for later Romantic landscape painters.

Since the painting features a series of tombs within a crumbling cemetery, it’s fairly obvious that death and decay are big themes in Jewish Cemetery. Many of us are familiar with the idea of vanitas in still life painting. In brief, this is the inclusion of transient and sometimes decaying objects in still life paintings, which call to mind the impermanence of life and the frivolity of its worldly cares and preoccupations. We’re less likely to think of vanitas in landscape painting, but that’s exactly what we find in this painting. This should not come as a surprise, however, since vanitas in still life was an invention of the Dutch Golden Age.

Jewish Cemetery isn’t simply a graveyard, as though that weren’t a symbol of mortality enough. It’s a graveyard that is being reclaimed by nature. The tombs are falling apart, and their pale marble has become discolored. Trees, grass, and shrubs have begun to overtake these monuments, perhaps showing humanity’s helplessness in the face of natural phenomena. However, some of the trees are dying, even as they overcome the graveyard. In particular, notice the broken tree trunk in the center of the composition and the bare, pale tree in the right foreground. The twisted or dying tree became a favorite of Sublime landscape painters, but it also appears as a vanitas element in less dramatic scenes.

In landscape painting, natural features like trees, mountains, streams, and waterfalls are ripe for symbolic and allegorical meanings of different sorts. Nature can embody many moods. This powerful, inevitable, and disconcerting version isn’t its only possible interpretation. In contrast to Jewish Cemetery, nature might appear idyllic instead. Ruisdael’s near contemporaries Poussin and Claude evoked an idea of a peaceful, timeless, gently-wild landscape in their classically-inspired historical landscapes.  This view of nature as a bucolic paradise was also popular in the 19th century. During the Industrial Revolution, when the British and American landscapes, in particular, were being ravaged to build factories and run train tracks, landscape painting was eager to capture and sentimentalize what was being lost.

For example, British artist John Constable elevated landscape painting to a monumental genre through his depictions of the disappearing English countryside. Constable was influenced by Ruisdael and even copied several of his works. Like his historical mentor, he is considered one of the most influential landscape painters even. Meanwhile, artists of the 19th century implied all sorts of emotional and transcendental meanings into the natural world, from the heightened awe and terror of Caspar David Friedrich to the mystical spirituality of George Inness.

The inclusion of a church is perhaps an unusual choice for a painting with the word “Jewish” in its title. It clearly means something, since it was one of the many elements that Ruisdael added to the scene that is not present near the real Beth Haim cemetery. The church towers above the tombs, but it’s in an even worse state than they are. Most scholars see the ruined Christian church and decaying Jewish cemetery as analogs for each other – evidence that members of every religion are equally susceptible to mortality and the ravages of time. The church has also been read as symbolizing the downfall of Catholicism in favor of Dutch Protestantism.

Ruined, or at least ramshackle, buildings feature prominently in several of Ruisdael’s works. They create feelings of melancholy and even nostalgia for times gone by. They have also featured heavily in the works of many other landscape painters since then. Most common of all are the classical ruins that dot generations of landscape paintings throughout Europe and America. In later generations, this sort of motif might be characterized as Picturesque, a Romantic idea involving elements of wildness and disarray. It was halfway between the ideal pastoral and horrifying Sublime. However, the very concept of the Picturesque was at least a century away in Ruisdael’s time.

In contrast to these symbols of loss, some commentators have also read hope into the symbolism of this landscape painting. They particularly point to the rainbow, signifying the end of a storm, and the stream, representing a constant cycle of movement. We should also notice that for all the dark and stormy weather on the painting’s left and right, the left-central section of the sky shows hints of light. It seems as though the darkness is about to pass, and the sun will soon come out.

Constable, who was known for his scientific attention to clouds, in particular, called the sky “the chief organ of sentiment”. He almost could have been describing this painting with that statement. While few artists put as much focus on their skies as Constable did, it’s certainly true that skies frequently set the tone of landscape paintings, often hinting at both the present conditions and what’s to come. Ruisdael’s sky seems to suggest the transience not only of life but also of death and despair. After death comes rebirth and renewal.

The Life Cycle of Landscape Painting

The cycle of decay and renewal symbolized in Jewish Cemetery is similar in many ways to the repeated cycle of decline and resurrection in the history of European landscape painting. Its first high point took place in the 17th century, with the Dutch Golden Age and the historical landscapes of Poussin and Claude. After that, it took until the 19th century, first with John Constable and J.M.W. Turner in England and then with French Barbizon School artists such as Camille Corot, for landscape painting to once again attain any real measure of acclaim.

Later on, modern artists such as the Impressionists and Post-Impressionists adopted the landscape as one of their favorite subjects. For them, symbolism and storytelling may have disappeared in favor of more purely visual concerns, but the expressive power of the landscape did not lessen. Perhaps that’s why the genre of landscape painting has persisted to the present day.