Frank Lloyd Wright is synonymous with modern American architecture. From Pennsylvania to Japan, discover ten of his most influential designs. 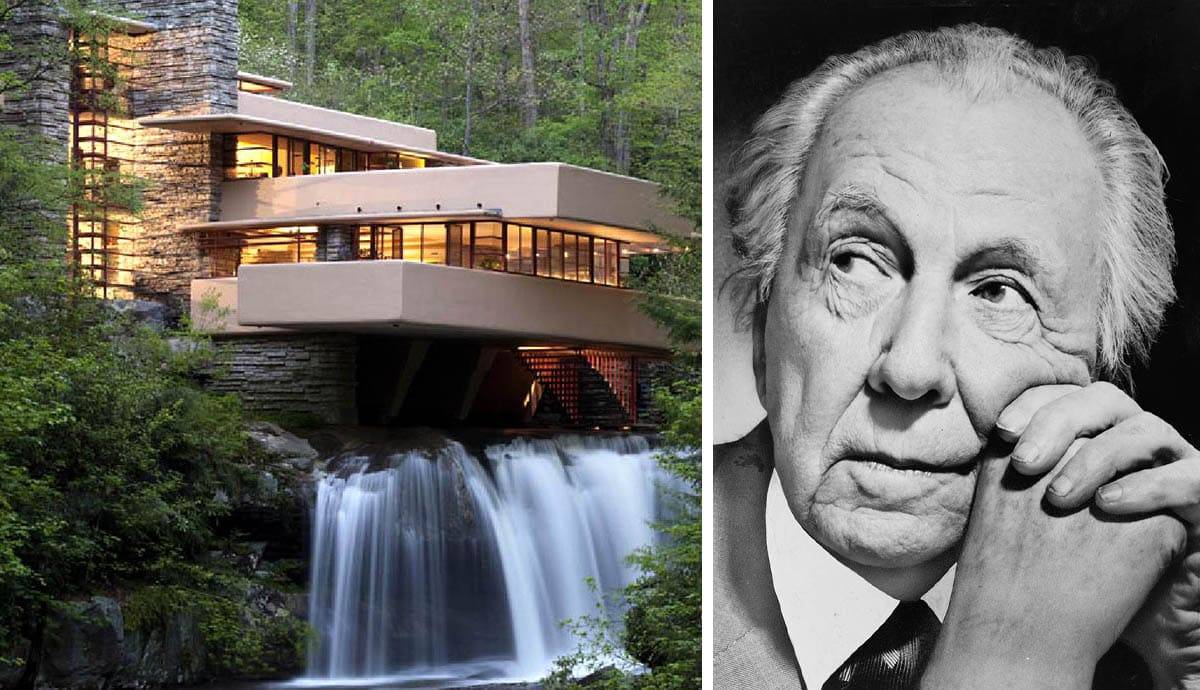 Frank Lloyd Wright once said “Every great architect is – necessarily – a good poet.” After overcoming a difficult childhood marked by poverty and abandonment, the 20-year-old Wright arrived in Chicago in 1887 with the dream of becoming an architect. He soon found employment as a draftsman at an architectural firm but was determined to work his way upwards. By 1893, Wright had opened a successful architectural practice of his own, putting to work not just his skills, but his truly poetic vision for what homes and buildings could accomplish. This marked the beginning of an over 70-year-long career that would result in over a thousand structures. These are ten of the most important and interesting homes that were designed by the famous architect.

Frank Lloyd Wright was just a young apprentice when, thanks to a loan from his employer, he embarked on the ambitious goal to design and build his first home in Oak Park, Illinois. The Frank Lloyd Wright Home and Studio began as a small home for Wright and his first wife. But over the course of several years, Wright transformed the home with various additions, including a drafting studio and a playroom for his children.

These additions, which occasionally involved the removal or replacement of interior walls and other major infrastructure, provided Wright the opportunity to explore and refine his approach to architecture, and to take away important lessons and insights for his commissioned work. Today, the Oak Park neighborhood, a suburb of Chicago, boasts several homes designed by the famous architect. Wright’s first home and studio remains much like it was when it was being used by Wright and his family and can be toured inside and out.

The Winslow House was Frank Lloyd Wright’s first major commission as an architect. Its apparent simplicity at first glance is deceiving. The subtle slope of the roof, and its unusually wide eaves, emphasize the monumentality and symmetry of the home’s façade. But the details throughout the exterior and interior, from the inclusion of an ornamental terracotta frieze to the asymmetrical floor plan circled around a fireplace, showcase the famous architect’s flair for experimentation, both aesthetically and functionally. Decades later, Wright reminisced about designing the Winslow House and referred to it as the “first prairie house” of his career.

Beginning around 1900, the Prairie School is considered to be the first uniquely American architectural style, and Frank Lloyd Wright is considered its leader. Inspired by the North American continent’s seemingly endless horizons and wide open plains, the Prairie School style emphasized horizontal lines instead of chasing vertical heights. The openness and vastness of this style also better facilitated modern American lifestyle, which moved away from formal conventions.

Wright’s Robie House in Chicago, which is known as the best example of the famous architect’s Prairie School residences, features a cantilevered roof and artistically designed glass windows that simultaneously provide privacy and fill the home with light and a sense of connection to the outdoors. Homes like Frank Lloyd Wright’s Robie House made the Prairie School style of architecture instantly popular across America.

The Martin House Complex was originally a large complex of several connected buildings that Frank Lloyd Wright believed was “a well-nigh perfect composition.” The complex, much of which has since been demolished and reconstructed, featured a gardener’s cottage, a conservatory, and a long pergola. The Barton House – a large residence with an open floor plan, monumental cantilevers, and a harmonious neutral color palette – was the first structure that Wright built for the Martin complex commission, and it led the way for the design of the rest of the buildings.

Nearly 400 art glass windows, with modern geometric designs and earthy colors, were designed by the famous architect especially for this complex, which is the most of any of Wright’s designs. Both the sheer volume of windows and their careful design that integrated into the whole interior scheme emphasize the sprawling openness of the floor plan and organically help connect the interior and exterior spaces within the complex.

At the top of a cascading waterfall, nestled in the lush forest of western Pennsylvania, sits Frank Lloyd Wright’s most famous work and arguably the most famous residential dwelling of the 20th century: Fallingwater. Aptly named for its ingenious limestone and concrete construction around the natural contours of the waterfall, Fallingwater was an immediate and sensational success for the famous architect and reignited his momentum in the final years of his nearly lifelong career.

With Fallingwater, Wright’s goal was to create a completely unified composition. To achieve this, the famous architect limited his color palette to an earthy ochre hue for the concrete, and a bright red for the steel elements. And, to take it a step further, Wright painstakingly unified the construction with the existing landscape itself – waterfall and all.

In contrast to the forested landscape surrounding Fallingwater, Taliesin West was built in the Arizona desert as Frank Lloyd Wright’s winter home and studio. It later housed a school, where the famous architect would enlist the help of his students to make repairs and creative adjustments throughout the house. In designing this property, Wright was inspired by the sprawling and sparse desert landscape and indigenous cultures of Arizona. Petroglyphs from millennia ago inspired Wright to design insignias for the property, and the sloping roof and masonry echo the angular red rock mesas around Scottsdale. This property is exemplary of his belief that architecture can and should reflect the landscape in which it is built.

Commissioned as a summer home for a wealthy sake brewer in western Japan, the Yodokō Guest House is cleverly built into a hilltop overlooking Osaka Bay, with one and two story sections functioning together like a giant staircase. The Yodokō Guest House is unique amongst the famous architect’s residences because the main entrance is located at the furthest end of the building from the road. This was on purpose—Frank Lloyd Wright wanted visitors to the house to experience an exterior view of the entire design before they even entered the front door.

Throughout the interior and exterior, the famous architect blended Western and Eastern aesthetic influences when designing this home, including locally-sourced Oya stone used in decorative blocks. Although the building has changed hands and suffered earthquake damage since its construction, it has been restored and reopened to the public as a museum.

A departure from his signature Prairie Style homes, Frank Lloyd Wright’s perhaps unexpected Mayan Revival period is best exemplified by the monumental Ennis House in the Los Feliz neighborhood of Los Angeles. Comprising 27,000 interlocking concrete block with precast relief designs, the Ennis House is the largest of several such concrete buildings designed by the famous architect throughout Los Angeles. The Ennis House demonstrates how Wright looked to the past, gathering inspiration from the temples of the Ancient Maya in Central America, and simultaneously to the future, creating a boundary-pushing new aesthetic that famously appeared in the futuristic 1982 film Blade Runner.

When Frank Lloyd Wright’s Hollyhock House was added to the UNESCO World Heritage list, it marked the first time a modern American building received that designation. The Hollyhock House in East Hollywood combined indoor and outdoor living spaces. The home’s seamless integration of living spaces, as well as the striking aesthetic of its architectural design, jump started a localized architectural movement. Other architects and their clients were inspired by Wright to build modern homes that functioned in tandem with the temperate climate and laid-back lifestyle that drew people to California.

When Herbert Jacobs challenged Wright to design and build a beautiful home with a budget of $5,000 (equivalent to about $98,000 in 2022), the famous architect delivered what is now known as his first Usonian building – a style that lay the foundation for the popular ranch-style home in mid-century America. The economical yet expertly designed Jacobs House, which was built for an ordinary family with limited means due to the Great Depression, utilizes minimalistic geometric forms, small spaces, and simple brick and wood materials. Despite its relative simplicity and small size, however, Wright carefully designed the home to integrate the interior and an outdoor terrace and garden, emphasizing the flow, using the limited space efficiently, and creating the illusion of more open space.