Japanese art today is bold, edgy, and adventurous, capturing the spirit of the zeitgeist. Here are 8 of today’s brightest Japanese artists. 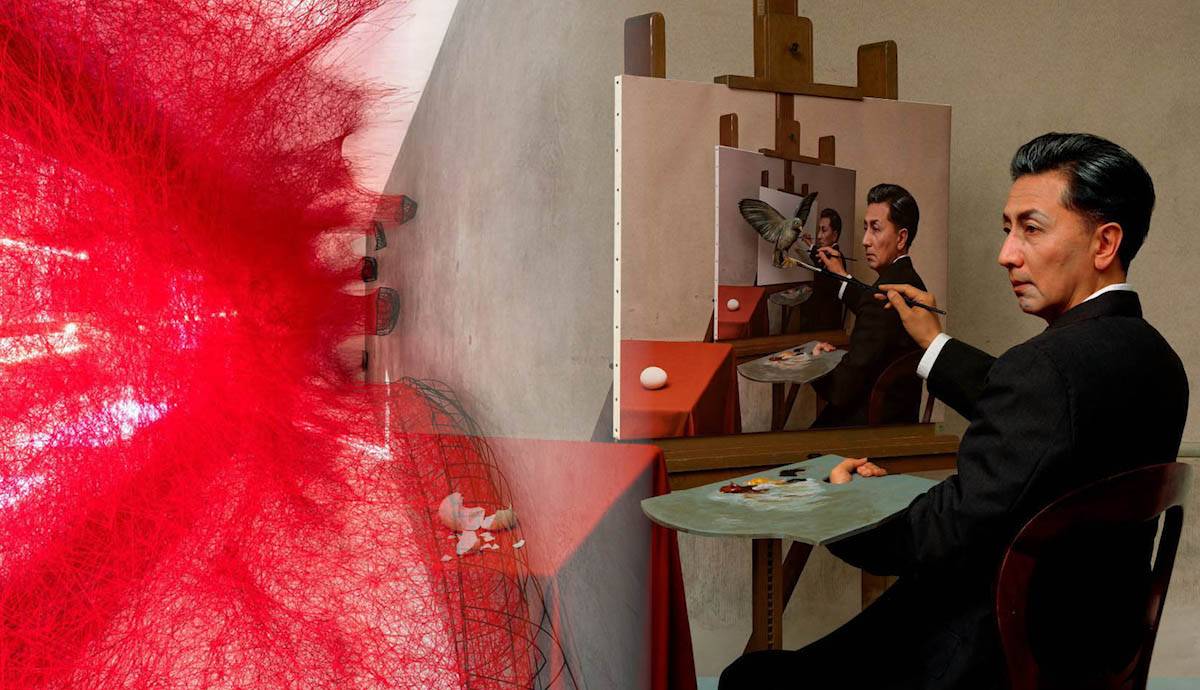 Japan is the birthplace for many of today’s most revolutionary artists; superstar names including Yoko Ono, Yayoi Kusama, Takashi Murakami and Yoshitomo Nara have taken the contemporary art world by storm in the past few decades. Peel back the layers and there are so many more Japanese artists to be discovered, whose voices are helping to shape the nature of today’s contemporary art. Artistic practices across Japan are thrillingly eclectic and diverse, responding intuitively and creatively to the ever-changing climate of Japan in an increasingly globalized world.

Japan has a long history of artistic innovation. From the 17th to the 19th centuries, the practice of ukiyo-e woodblock printmaking was at the center of Japanese visual culture, illustrating a huge array of subjects from beautiful women to actors, landscapes, heroes, and folk-tales, all rendered in a flattened, linear style. Themes of nature, religion, and East Asian philosophy were prominent, as demonstrated in the famous Ukiyo-e prints of Katsushika Hokusai that illustrate the vast and enduring presence of the Japanese landscape and Mount Fuji.

From the late 19th century onwards, Japan began trading with the West, and this shift allowed an exchange of ideas between East and West. Just as the French Impressionists took inspiration from the bold contours and cropped compositions of Japanese woodblock prints, Japanese artists similarly began emulating modernist ideas, such as oil painting and the portrayal of scenes from ordinary life. In 1897, the Tokyo School of Fine Arts set up a department of Western painting that taught Western art’s themes and techniques while encouraging artists to combine them with the legacies of ancient Japan.

In the 1950s, the radical Gutai Group emerged, charging through post-war Japan with rebellious painting performances and multi-media installations that anticipated the happenings of performance art in Europe and the United States. Their ideas placed Japan at the forefront of contemporary art, and this spirit has continued to evolve and grow ever since, from the subversive and eclectic postmodernism of Yayoi Kusama and Yoko Ono to the Superflat pop styles opened up by Takashi Murakami and Yoshitomo Nara. Let’s take a look at some of the most pioneering Japanese artists of today who are leading us into the future.

Japanese painter Hiroshi Sugito was trained in the Nihonga tradition, which involves painting with pigments made from naturally derived minerals, rocks, and shells onto sheets of paper. Although he later moved towards painting with acrylic on canvas, his paintings retain the same light, delicate quality of the Nihonga style, as seen in Pink Water, 2005. Sugito first emerged in the 1990s as a younger member of the Superflat generation led by Takashi Murakami, who sought ways of merging Japanese pop culture with fine art. Sugito translates the imagery of pop culture in a less direct way than many of his contemporaries. Still, his overtly sentimentalized landscapes in candy-sweet colors reference Japan’s role as a popular tourist destination while undercutting this “cuteness” with a brooding air of unease through eerie lighting effects.

2. Aya Takano: A Member of the ‘Superflat’ Generation

Japanese artist Aya Takano is widely recognized as a prominent member of Japan’s Superflat generation and is an active member of Takashi Murakami’s Kaikai Kiki contemporary art collective, who merge Japanese pop and cute kawaii references with the style of ukiyo-e woodblock prints. Takano’s artworks are dominated by women with huge eyes and skinny, elongated legs, recalling the cartoonish style of Japanese manga. Many of her artworks also reference Japanese woodblock prints with brilliantly colorful fabric and eye-catching arrangements of color, as seen in Every Day is a Carnival, 2012. But in contrast with the Japanese art of the past, Takano’s women are strident, confident, and sexually empowered, illustrating a new brand of Japanese femininity and perhaps even acting as reflections on Takano’s own identity.

Chiharu Shiota makes dazzling, visually arresting installations from yards and yards of humble thread, spread out across vast spaces to form intricate, complex, and all-encompassing webs that are as active and alive as the forces of nature. Bound into these huge installations are various found objects loaded with their own weight of human history, including keys, book pages, bed frames, and doors. These items have had another life elsewhere before being upcycled into her art. Uncertain Journey, 2016, was made for Gallery Blain Southern in Berlin, with a series of tessellated boat skeletons bound by the elemental sweeping forms of intense red thread. Chiharu trained in Japan, Australia, and Germany and now lives and works in Germany, but her practice is infused with the haunting poetry and ghostly spatiality of her Japanese heritage.

Japanese artist Chiho Aoshima is another prominent member of Takashi Murakami’s Kaikai Kiki Collective. Like many of her contemporaries, her art fuses references to Japanese popular culture with the stylized language of Japan’s woodblock prints. Aoshima uses the software program Adobe Illustrator to create fantastical, dream-like landscapes. These designs are then printed onto various surfaces, including paper, plexiglass, canvas, and aluminum. In Aoshima’s world, young girls, sushi chefs, and monsters nestle in among cherry trees or soaring artificially lit skyscrapers, transforming the Japanese land and cityscapes into surreal and otherworldly realms. References to anime, mythology, erotica, and surrealism are blended into one in her strangely haunting arenas, where cuteness teeters on the brink of evil.

Renowned contemporary Japanese artist Tabaimo creates introspective, haunting video installations that reflect on universal themes of isolation, contagion, and insecurity. Her video installations feature intricately hand-drawn elements inspired by the language of Ukiyo-e woodblock prints, anime, and manga. They are then projected across multiple walls or onto historical Japanese objects such as cabinets, as seen in Two, 2016, creating a sensory and all-encompassing experience. Strange, isolated figures populate her world of desolate trains, public restrooms, and bathhouses as if struggling to find their place in the world.

Japanese photographer Hiroshi Sugimoto has been recognized internationally for his uncanny ability to capture the mystical properties of objects and places that exist beyond the naked eye. This effect is achieved through extended exposure times that pick up microscopic detail and create dramatic, theatrical lighting. One of his most famous series’ which he has been developing since the late 1970s, focuses on empty movie theatres around the world. He photographs for an exposure time that lasts the entire duration of the film on show, leaving behind only a glowing white screen and its cast light effects on the space around it, as seen in Teatro Carignano, Turin, taken in Italy in 2016. Sugimoto was awarded the Hasselblad Foundation International Award in Photography in Sweden in 2001, and they praised his innate ability to merge what they called “Eastern meditative ideas with Western cultural motifs.”

Yasumasa Morimura is one of Japan’s most celebrated contemporary artists whose work centers around an elaborate form of self-portraiture. With the extensive use of props, make-up, costumes, and digital manipulation, he sets up theatrical scenarios based on iconic imagery from Western art history and popular culture, posing himself at the center of it all. Some of the most famous figures he has emulated include Vincent van Gogh, Frida Kahlo, and Marilyn Monroe. In doing so, Morimura reflects on the Japanese obsession with Western culture. He also encourages us to consider the complex relationship a viewer has with a work of art, each seeing it in their own individual way.

Daido Moriyama is one of Japan’s leading street photographers, recognized for making astute observations of contemporary Japanese society and culture. He rejects precision for an informal, grainy quality, and takes the majority of his photographs on a compact camera that allows him to make snapshots of ordinary life as it happens. Japanese cities are his playground, and he observes, “The city has everything: comedy, tragedy, eulogy, eroticism.” Pretty Woman, 2017, is part of a larger series that documents the overcrowded city streets of Tokyo, where billboard images of idealized young women tower over the throng of people below.

Today’s most adventurous Japanese artists showcase their work in a wide variety of exhibition spaces well beyond Japan, including much of Asia, Europe, and the United States. Many of the world’s museums now house extensive collections of Japanese art. Because of this, the influence of Japanese art past and present can be clearly seen in countless leading contemporary artists, including the graphic, linear, and surreal paintings of Inka Essenhigh, the dreamy erotica of Lisa Yuskavage, and the contemplative, spatially aware art of Julie Mehretu. In Japan, a suite of relatively new exhibition spaces, including The National Museum of Modern Art in Tokyo, Taka Ishii Gallery in Roppongi, and Misako and Rosen Gallery in Tokyo, are dedicated to supporting and promoting contemporary Japanese art. But perhaps most importantly, they place the work of leading Japanese artists alongside cutting-edge practices from across the globe, allowing for the fluid and borderless exchange of ideas.