Yoshitomo Nara’s sad, malevolent characters speak universal truths about human anxiety. These are his most powerful and emotive artworks. 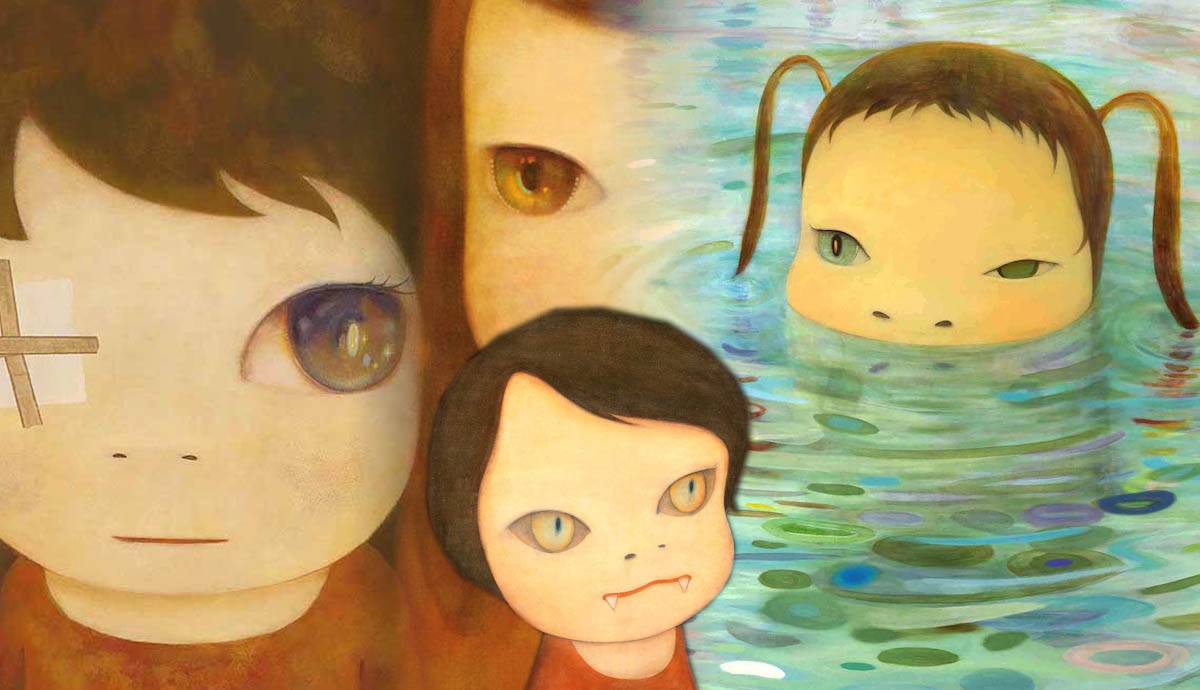 Contemporary Japanese artist Yoshitomo Nara has a curious ability to blend cute with creepy, capturing doe-eyed children who set fires, bear fangs, and hide weapons behind their backs. The complex duality of Nara’s art, hovering between childish innocence and the violence of adulthood, reflects the pervasive unease he felt growing up in post-war Japan, a time when fear and paranoia ran rife. However, it also captures the universal angst at the core of the human condition, particularly in today’s fragmented world, where a fragile and defensive inner child lurks within us all.

The widespread popularity of Yoshitomo Nara’s contemporary Japanese art today is a testament to its egalitarian nature, which encourages us to look within ourselves and reflect on the inherent frailties that make us who we are. Art critic Roberta Smith notes of Nara’s universal appeal, “He seems never to have met a culture or generation gap, a divide between art mediums or modes of consumption that he couldn’t bridge or simply ignore.”

The artist Yoshitomo Nara was born in 1969 and raised in a rural community near Hirosaki in Japan. The post-war Japan in which Nara grew up was trying to heal from the economic shock of war. Thus, Nara’s parents were part of a generation who worked hard to heal the Japanese economy. This meant Nara was often left home alone for long periods of time, and he developed a sensitive, loner personality, feeling more at ease communing with animals than people. He also immersed himself in contemporary culture, reading Japanese Manga comic books, American cartoons, as well as rock and punk music, all of which would later color his art as an adult. He was particularly taken with the album covers of punk records, which were his first introduction to the rebellious nature of contemporary art. “There was no museum where I grew up,” he remembered, “so my exposure to art came from the album covers.”

Nara enjoyed drawing and sculpture from a young age. He studied a Bachelor of Fine Arts at the Aichi Prefectural University of Fine Arts and Music in Nagakute, followed by a Master’s degree there two years later. In 1988, Nara studied for six years at the Kunstacademie in Dusseldorf. Here he adopted an Expressionist style of painting, taking influence from German Expressionism and the anarchic spirit of punk music. Nara’s time in Germany was marred by loneliness, echoing the isolation of his childhood. He remembered, “I felt the city’s cold and darkness, just like my hometown, and the atmosphere there reinforced my tendency to seclude myself from the outer world.”

This palpable discomfort was instrumental in helping Nara find his signature aesthetic as an artist, teaching him how to look inwards and accept parts of himself that might otherwise be hidden away. “I found my style only after living in solitude,” he explained. Nara’s art that emerged following this difficult spell documented young, child-like figures influenced by the Japanese “kawaii” culture of cuteness, the huge-eyed style of manga, and the “superflat” art of Takashi Murakami. But into this Japanese pop realm, Nara also introduced qualities of menace, threat, loneliness, and self-reflection, considering the individual’s isolated role in the industrialized world. Let’s take a closer look at Nara’s incredible paintings as they have evolved over the years.

In Yoshitomo Nara’s painting Sleepless Night (Cat), 1999, a cloak of darkness descends behind this curious child, who seems to be transforming into a vampiric creature of the night. Alone in the darkness, he or she is at once both innocent and menacing, hinting at the inherent complexities that underlie the human character. Something is troubling and unsettling about seeing the purity and vulnerability of a young child disrupted in this way, and Nara hints at the darker, wicked side of childhood that is sometimes overlooked. However, he also encourages us to think about the childish spirit lurking within ourselves as adults, one which is tinged with both fragility and a rebellious streak of malevolence.

Knife Behind Back, 2000, is one of Yoshitomo Nara’s most famous paintings. Strikingly simple, a young girl scowls at us from the painted canvas, one arm concealed from view. The title implies this girl is hiding a weapon behind her back for some unknown purpose, which could be vengeful or malicious. Adding this hint of violence into an image of a young girl stirs up some complex psychological issues, particularly the notion that someone apparently innocent, naïve, or powerless might have hidden strengths lurking within. But Nara also suggests there is often paranoia and fear behind a façade of sweetness in both children and adults, highlighting the perpetual unease and danger of contemporary living. “Look at them,” he writes of his children, “Do you think they could fight? I don’t think so. Rather, I kind of see the children among other, bigger, bad people all around them, who are holding bigger knives.”

In Yoshitomo Nara’s print Star Island, 2003, the artist explores an abstract, cartoonish language, with the disembodied heads of various characters floating in a star-filled blue sky. As in his earlier contemporary Japanese artworks, the apparent simplicity of the work conceals greater complexity within. The characters float separately from one another in empty space, much like individuals searching for their own place within an increasingly isolated world. Nara’s characters’ varying expressive faces reinforce this sense of dislocation, as each creature responds to their circumstances with highly individualized reactions, ranging from cynicism and delight to deep, meaningful introspection.

Deeper than a Puddle, 2004 has a strangely captivating quality as a child’s head emerges from a pool of glistening water and looks cautiously out at the world beyond. Nara made this painting in collaboration with his contemporary Hiroshi Sugito, as part of a large series of 35 paintings inspired by the 1939 Metro-Goldwyn-Mayer musical The Wizard of Oz. A Dorothy-like character peeks out from the scene with slim, wet pigtails. Both artists bring their own trademark styles into the image – Nara’s stylized, cartoonish character is merged with Sugito’s dreamy, prismatic light effects. This combination between figure and setting creates a dream-like scenario where the girl hovers between the real world and the mystical one below the water’s surface. On the one hand, this gateway between one world and another references the fantastical escapism in The Wizard of Oz story. Still, it also has a more profound and universal meaning, balancing the pressure to brace the real world against a deeper desire to melt into a puddle and disappear.

Yoshitomo Nara’s drawing Sorry Couldn’t Draw Right Eye, 2005 demonstrates the artist’s increasing preoccupation with huge, reflective eyes and their potential to express complex human emotions. The jagged cross covering one of this child’s eyes hints at violence, pain, and suffering, while the other gazes at us in soulful contemplation. Nara increases the inherent vulnerability of the child by adding this suggestion of injury. But curiously, the title of the work has a self-effacing quality, the artist admitting his own struggles and failure. In doing so, the child becomes a symbol of Nara himself, that vulnerable innocent who can’t quite measure up to perfection, and Nara encourages us to see and embrace those qualities in ourselves too.

Yoshitomo Nara’s painting Midnight Surprise, 2017 is typical of his most recent work, which has a deeper, contemplative quality than his earlier paintings, invoked through the power of penetrating, emotionally complex eyes and atmospheric color. Various jarring life events stirred up this change in Nara’s style, particularly the Great East Japan Earthquake in 2011 and the death of his father. In this work of contemporary Japanese art, we are drawn deep into the inner world of this enigmatic character, whose glassy, penetrative eyes meet ours in a direct and unflinching stare. In earlier works, Nara attached adult emotions of anger and rebellion to his children, but in paintings like this one, children are given more grown-up qualities of self-reflection and awareness. Although the young person here is less angry, there is still an inquisitive anxiety bristling just below the surface, as if she is still trying to figure out her place in the world.

Yoshitomo Nara is one of today’s leading contemporary Japanese artists, and his art reaches astronomical prices in the international art market. This widespread publicity has made him a hero amongst the contemporary Japanese art world, and various artists reveal the influence of his work. These include Mariko Mori, who similarly merges Japanese pop culture with a spiritual and transcendental quality, Chiho Aoshima, who merges Japanese ukiyo-e traditions with darkly satirical references to contemporary life, and Aya Takano, who merges the cuteness of kawaii with images of adult sexual empowerment. Further afield, American Inka Essenhigh reveals Nara’s influence with bold, flat areas of color inspired by Japanese cartoons, merged with sinister elements of Surrealist narrative.