As members of 'the Lost Generation,' Gertrude Stein and Ernest Hemingway both emigrated to Paris at the beginning of the 20th century to write, each developing their own unique style. 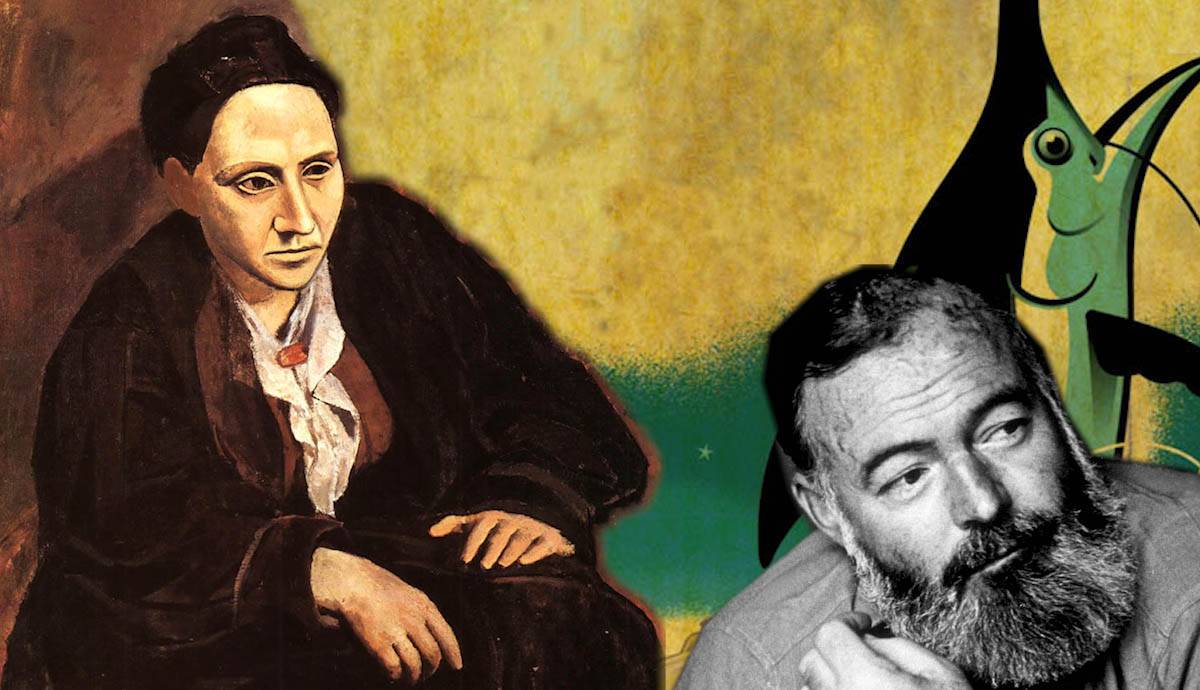 Gertrude Stein moved from California to Paris in 1903 with the aspiration of becoming a writer. She is best known for her art collection, plays, and novels, which involve radical experiments in language and the use of “stream-of-consciousness.” Once settled in Paris, she built up an art collection while living with her brother Leo. Stein also hosted parties and gatherings for other writers and artists and soon became a kind of matriarch and an influential advocate of the avant-garde.

Ernest Hemingway arrived in Paris in 1921. Hemingway was working as a journalist at the time but also aspired to write novels. He soon came into contact with Gertrude Stein, who mentored him and encouraged him to pursue his own autobiographical writing, aside from journalism.

Read on to discover the incredible lives of these two authors, and find out what happened when their paths crossed in the beautiful and avant-garde city of Paris.

American writer Gertrude Stein was born in Pittsburgh, Pennsylvania in 1874 and grew up in California. When she moved to Paris, she primarily began writing novels but soon became an art collector and an influential supporter of emerging art movements. To support the development of new movements and styles, Stein often mentored other writers and artists. She developed her own idiosyncratic writing style, which often involved repetition, humor, and the disruption of conventional syntax. Some of her most unusual lines can be found in her poetry:

“The change of color is likely and a difference a very little difference is prepared. Sugar is not a vegetable.”
A Substance in a Cushion

Gertrude Stein valued experimentation and the development of new forms of expression in order to break free from the past. As a student at Harvard University, she developed an interest in psychology, which she would later apply to her writing. Gertrude Stein was influenced by the theories of American psychologist William James, especially his concept of “stream-of-consciousness,” which is a kind of automatic writing that reveals an individual’s thoughts and perceptions in a flowing state.

Stein was considered a difficult writer because of her complex vocabulary and her peculiar approaches to writing. Aside from her work, Gertrude Stein had a reputation as a self-confident, quick-witted, and outspoken woman who valued her own intelligence and creativity.

Stein also helped launch the careers of several Cubist and Fauvist painters, including Pablo Picasso, Henri Matisse, and Juan Gris. Aligned with emerging developments in the visual arts, Stein sought in her writing to achieve an “exact description of inner and outer reality,” while the Cubists looked for “an integral truth” beyond subjective experience. Both strands of thought wanted to move away from 19th-century conventions of subjectivity and towards something closer to scientific objectivity.

Gertrude Stein’s unique method of writing, taking influences from psychological “stream of consciousness” as well as the artistic avant-garde, can be seen especially in her poem A Carafe, that is a Blind Glass:

“A kind in glass and a cousin, a spectacle and nothing strange a single hurt color and an arrangement in a system to pointing. All this and not ordinary, not unordered in not resembling. The difference is spreading.”

The Lost Generation in Paris

“The Lost Generation” was a term adopted by Gertrude Stein to refer to the dispirited generation of people who had lost sons, brothers, husbands, and fathers in the First World War. However, it also encompassed more broadly those who felt displaced or disillusioned following the War, which included many American writers and artists who had emigrated to Paris in the 1920s. According to Stein, the term une generation perdue was used by a French mechanic who fixed Stein’s car while she was staying at Belley’s Hotel Pernollet in Paris. The French chef and hotelier, Monsieur Pernollet, later used the phrase, which Stein overheard and then adopted for her own writing.

For Stein, the Lost Generation characterized an entire generation of people who had suffered the consequences of a global war and who had not had the opportunity to be “civilized.” The term was essentially a compassionate description, not only referring to the young men who had died fighting in the First World War but to those who had to forge a way forward in the bloody aftermath.

Along with many other expatriates who had arrived in Paris from elsewhere in the first few decades of the 20th century, Gertrude Stein and Ernest Hemingway were in good company. Other members of the Lost Generation transplanted in Paris included many writers and painters, such as F. Scott Fitzgerald, Sherwood Anderson, and Pablo Picasso.

In Paris, Gertrude Stein lived at 27 Rue de Fleurus on the Left Bank, and it soon became a social hub for emerging avant-garde painters, writers, and artists. Stein lived there with her brother Leo, and together they established an art collection and organized many soirées. She hosted a salon where artists and writers could meet, socialize, and exchange ideas while perusing her art collection. Some of the art movements Stein influenced and was directly involved with include Cubism, Fauvism, Modernism, and Primitivism.

Throughout much of her early career, Stein’s writing was not commercially successful, and critics dismissed her as being incomprehensible. However, her work and her role as benefactor and mentor did capture the attention of several other American writers living in Paris at that time, which included Ernest Hemingway.

Ernest Hemingway seemed to be Gertrude Stein’s polar opposite, both in terms of writing style and in way of life. While Stein collected art and hosted soirées, Hemingway was a war veteran, a sportsman, and a journalist. However, there were similarities between the two Parisian expatriates since both had great confidence in their own abilities. When they met in Paris, Hemingway was strongly influenced by Stein’s writing.

Ernest Hemingway similarly used the term Lost Generation, as an epigraph in his novel The Sun Also Rises, published in 1926. The book tells the story of expatriates who attend the running of the bulls and the bullfights in Pamplona, Spain. In the novel, Hemingway emphasizes the resilience and strength of the so-called Lost Generation, who, despite their troubles, can bounce back and can begin to live again.

While Stein’s writing is playful, humorous, and experimental, Ernest Hemingway developed a simple, concise, and vigorous writing style. Moreover, his writing was colored and informed by his own lived experiences as a war veteran, a boxer, and a traveler.

Ernest Hemingway was best known for his novels, though he also wrote short stories and poetry. The writer Frederick J. Hoffman describes Hemingway’s style as an “esthetic of simplicity” that concerns a “basic struggle for absolute accuracy in making words correspond to experience.”

Although much of Ernest Hemingway’s work is fictional, it often draws on his own adventures and serves as an exploration of his own identity. For Hemingway, words were similar to objects in that he chose each word carefully and believed that each one served a use. He valued the utility and clarity of writing and its capacity to establish a reality based on lived, tangible experience.

After leaving school, Hemingway worked as a journalist for the City Star in Kansas. It was there that he was advised to use simple, straightforward language in his articles, including brief paragraphs. The paper also advised him to “use vigorous English” and to “be positive, not negative.” He adopted these rules to his writing throughout his career and believed firmly: “the writer’s job is to tell the truth.”

Allegedly, when Hemingway struggled to write, he would remind himself that writing one single true sentence would allow him to move forward. As a writer, his life and work were intimately related, and two of his most well-known novels draw on his own experiences as a First World War veteran, The Sun Also Rises and A Farewell To Arms.

Despite their differences, it was inevitable that Gertrude Stein and Ernest Hemingway would come into contact. In 1921, Hemingway married Hadley Richardson and started working for The Toronto Daily Star as their European correspondent. He moved to Paris with Hadley, first settling down in a basic bare-bones apartment without running water.

Before leaving Chicago for Paris, Hemingway had met Sherwood Anderson, an established American writer. Anderson had given Hemingway a letter of introduction addressed to Gertrude Stein. After meeting, Stein introduced Hemingway to the emerging art scene which she helped foster during the soirées in her salon.

In Paris, Gertrude Stein guided Ernest Hemingway during his early career as a novelist and through his transition from journalism to fiction. However, their relationship was often strained and included a falling-out following the publication of The Sun Also Rises. In the end, Hemingway was deeply inspired by Stein’s writing and valued her as a mentor, though they later grew apart, each venturing their own way in the literary arts.