The Gorbachev Era: Glasnost & Perestroika Pre-Fall of the Soviet Union

The reforms of Mikhail Gorbachev, known as the “Perestroika” (restructuring) and “Glasnost” (openness), brought dramatic changes to the Soviet Union and eventually hastened the fall of the Soviet regime. 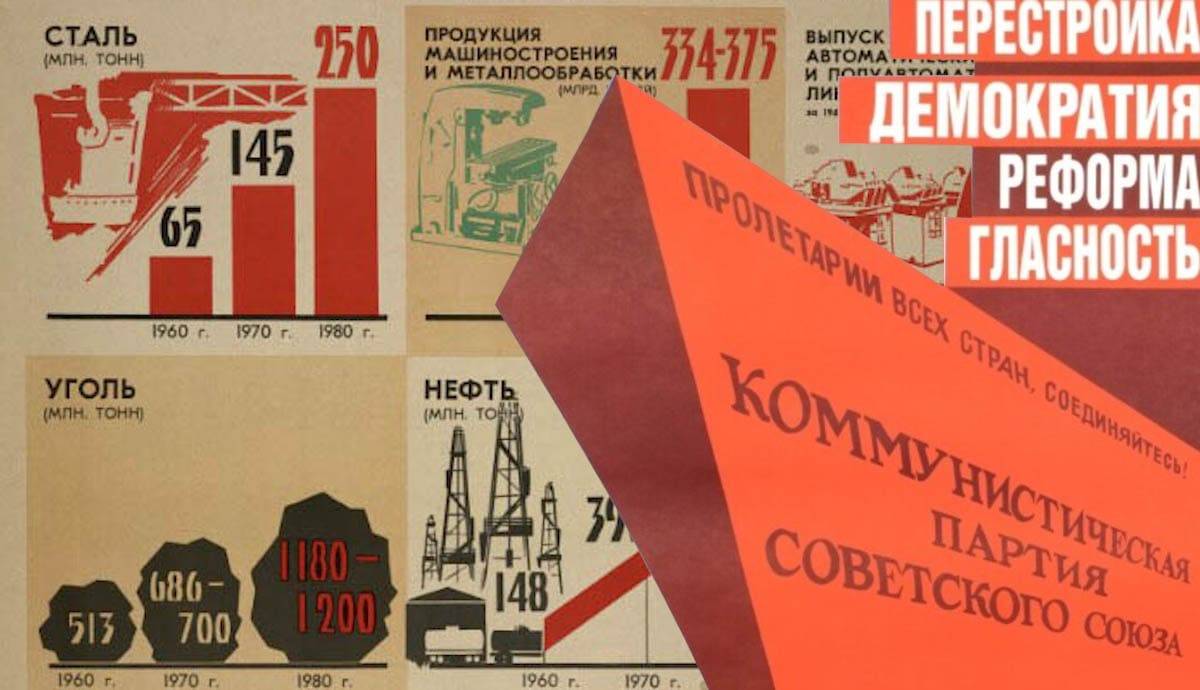 From the mid to late 1980s, the newly appointed General Secretary of the Communist Party Mikhail Gorbachev implemented revolutionary reforms of the Soviet Union: Perestroika (restructuring) and Glasnost (openness). The reforms were linked to the “new thinking” and were adopted following a decade of economic stagnation, declining production, major shortages, and poor living conditions in the USSR. Gorbachev believed that with the existing degree of centralization and bureaucracy, the Union could not develop and achieve economic revival.

The Soviet Union Before Mikhail Gorbachev

After the death of Joseph Stalin, Nikita Khrushchev became the new leader of the Soviet Union in 1953. Khrushchev elaborated a new foreign policy paradigm intending to reestablish relations with the Great Western Powers: The United States, the United Kingdom, and France. The central goals of the altered Soviet foreign policy were to decrease the militarization process of the Cold War and to act more freely in an international arena. However, the new strategy did not exclude the Soviet Union’s imperial aspirations. The spread of communism worldwide remained a priority. Consequently, Khrushchev’s foreign policy actions overseas did not reflect his aspirations for peaceful coexistence. During his rule, the USSR fought with the United States over Berlin and Cuba and threatened nuclear war. These actions had an opposite effect: relations between the superpowers were the tensest they had ever been during the Cold War.

Between 1964 and 1982, the focal point of the next Soviet leader, Leonid Brezhnev, was foreign and military affairs. To support the spread of communism internationally, he developed the Brezhnev Doctrine, which stated that any threat in any country of the Soviet Union was a threat to all the bloc members and therefore military intervention to assist communist forces was justified. The doctrine was promulgated to justify the Soviet invasion of Czechoslovakia in 1968 to overthrow the local reformist government.

During the 1970s, Brezhnev elaborated the strategy known as Détente to restore relations between West Germany and the Warsaw Pact while also easing tensions with the United States. Simultaneously, he expanded and modernized the Soviet Union’s navy and military capabilities. The Soviet army remained the largest worldwide. Under his leadership, the Union attained strategic nuclear parity with the United States, and its space program surpassed that of the United States.

In addition, Brezhnev backed “national liberation battles” in emerging nations by providing military help to left-wing groups and regimes. In December 1979, the Soviet Union invaded Afghanistan to support a collapsing communist government. Brezhnev’s efforts to suppress internal opposition within the USSR were similarly relentless. However, Brezhnev’s continuous expansion of defense and aerospace sectors deprived other areas of the economy of resources. As a result, Soviet agriculture, consumer goods industries, and healthcare services deteriorated during the 1970s and early 1980s. The outcome was production shortages and the failing living conditions of the Soviet population.

As a Communist Party politician, Mikhail Gorbachev took power in 1985. He inherited a stagnant economy and fragile political system. In addition to the economic and political chaos that Gorbachev encountered when he took office, the Soviet regime had already created the Soviet citizens’ reliance on their leaders, meaning that major changes and reforms could only come from above- from the leaders themselves. The impetus to “reform from above” compelled Gorbachev to introduce two sets of reforms- Glasnost and Perestroika. The main goal was to make both the central government and the Soviet economy more efficient.

Perestroika (“restructuring” in Russian) was aimed at economic reconstruction, while Glasnost introduced transparency and Soviet Regime liberalization, such as freedom of expression and information sharing.

Gorbachev acknowledged the stagnant Soviet economy and poor living standards when he became the Soviet leader. Soon after, he introduced a report to the Congress of the Communist Party stating the inevitability of revolutionary changes: Uskorenye (acceleration- modification of central planning), Perestroika, and Glasnost.

The political foundation of the economic reform (Perestroika) was presented later on in 1987, during the plenary session of the Central Committee of the Communist Party, when it became obvious that with the existing degree of centralized planning and bureaucratic control, an economic revival was impossible. The same year, the Law on State Enterprise was passed.

The law stated that state businesses could set output levels depending on consumer and other enterprise demands. Enterprises were required to fulfill governmental demands, but they were free to dispose of the rest of their output as they saw appropriate. However, the state retained control over the means of production for these companies, restricting their capacity to adopt full-cost accountability. Enterprises purchased input from suppliers at predetermined contract rates. Enterprises became self-financing under the law, which required paying.’ expenditures (wages, taxes, supplies, and debt payments) with profits.

It also allowed the different industrial and agricultural ministries to take on the responsibility of international commerce in sectors within their jurisdiction, rather than having to work through the bureaucracy of trade ministry entities. Furthermore, regional and municipal organizations and individual state companies were authorized to engage in international commerce. These modifications attempted to correct a key flaw in the Soviet foreign trade regime: the absence of communication between Soviet users and providers and their foreign counterparts.

The Law on Cooperatives passed in May 1988 and was probably the most dramatic of Gorbachev’s economic changes. The law allowed collective ownership of enterprises in the services, manufacturing, and foreign-trade sectors. Cooperative restaurants, stores, and manufacturers became a part of the Soviet landscape due to these provisions. With Perestroika, Gorbachev wanted to make socialism a real alternative to capitalism.

The second component of Gorbachev’s reforms is known as Glasnost. Glasnost removed media and information constraints that had been a part of Soviet society since Joseph Stalin. In English, Gorbachev’s understanding of “Glasnost” is best summarized as “openness.” While associated with freedom of speech and expression, the major purpose of this strategy was to make the Union’s administration transparent and loosen the bureaucracy.

It represented Gorbachev’s views, interpreted as enhanced openness and transparency in Soviet institutions. Gorbachev embraced public criticism as well as a certain degree of media exposure with decreased censorship and greater freedom of information sharing. Information on the reportedly greater quality of life in the United States/Western Europe and western popular culture was conveyed to the Soviet population. “Glasnost, criticism and self-criticism are not just a new campaign. They have been proclaimed and must become a norm in the Soviet way of life,” said Gorbachev.

The policy of greater openness, i.e., Glasnost, was political in reality and reflected the realpolitik of the Soviet leader: the block needed dramatic changes with high-level corruption and a collapsing economy. For Gorbachev to gain public support for his reforms, the Soviet leadership had to let people see the problems previously hidden from public view.

As a result, in the mid-1980s, Glasnost was launched as a risky experiment to enable more freedom while attempting to keep party control over what may be made public and what would be kept secret.

The Soviet Union Under Perestroika and Glasnost

The revolutionary reforms of Gorbachev, Perestroika and Glasnost, produced dramatic changes not only internally, but it influenced the foreign policy of the Soviet Union as well. Being transnational, these two reforms marked the beginning of the end of the Cold War.

Internationally, to successfully achieve the ambitious goals of Perestroika and Glasnost, Gorbachev had to limit the USSR’s foreign commitments and reduce military spending to slow the country’s economic downfall. This led to the reopening of nuclear armament talks with the United States in 1987 and forming closer ties with the European Union. In the same year, the president of the United States, Ronald Reagan, stood near the Berlin Wall and gave probably the most prominent speech of his presidency: “Mr. Gorbachev, tear down this wall.”

At the same time, Gorbachev halted the Soviet engagement in other regions of the world: retreated from Afghanistan, put pressure on the Vietnamese to abandon Cambodia, reestablished Sino-Soviet relations, withdraw support for Ethiopia and Cuban troops in Angola, cut off economic aid to Cuba and removed Soviet troops from the island, restored diplomatic relations with Israel, and denounced Iraq’s invasion of Kuwait. Concerning the former satellite states of the USSR, Gorbachev’s strategy of disengagement would be much more pronounced in Europe, bringing freedom to Soviet satellites later on.

Despite Gorbachev’s efforts, implemented changes did not achieve the desired results. Glasnost and Perestroika, although appearing to be mutually beneficial, were irreconcilable. The Communist party and hence state socialism rested on unquestioned obedience, which was questioned by Glasnost. Perestroika was a reorganization of state socialism/the Communist Party and required the central government’s strength and authority to function. Glasnost posed a challenge to party rule, and Perestroika could not exist or operate without it.

Gorbachev’s reforms within the policy of Perestroika and Glasnost weakened the central government and shifted the balance towards local and regional bodies of the Soviet bloc. As a result, Gorbachev himself lost support within Communist Party and the Soviet population. In August 1991, a coup led by reactionaries linked with certain KGB personnel tried to overthrow Gorbachev. He remained in power, but only temporarily. On December 25, 1991, Gorbachev resigned.