Sigmar Polke was a German Artist, famous for co-founding the Capitalist Realism art movement. The fundamental ideas of this movement recurred throughout his career, adjusted for the progression of capitalism. 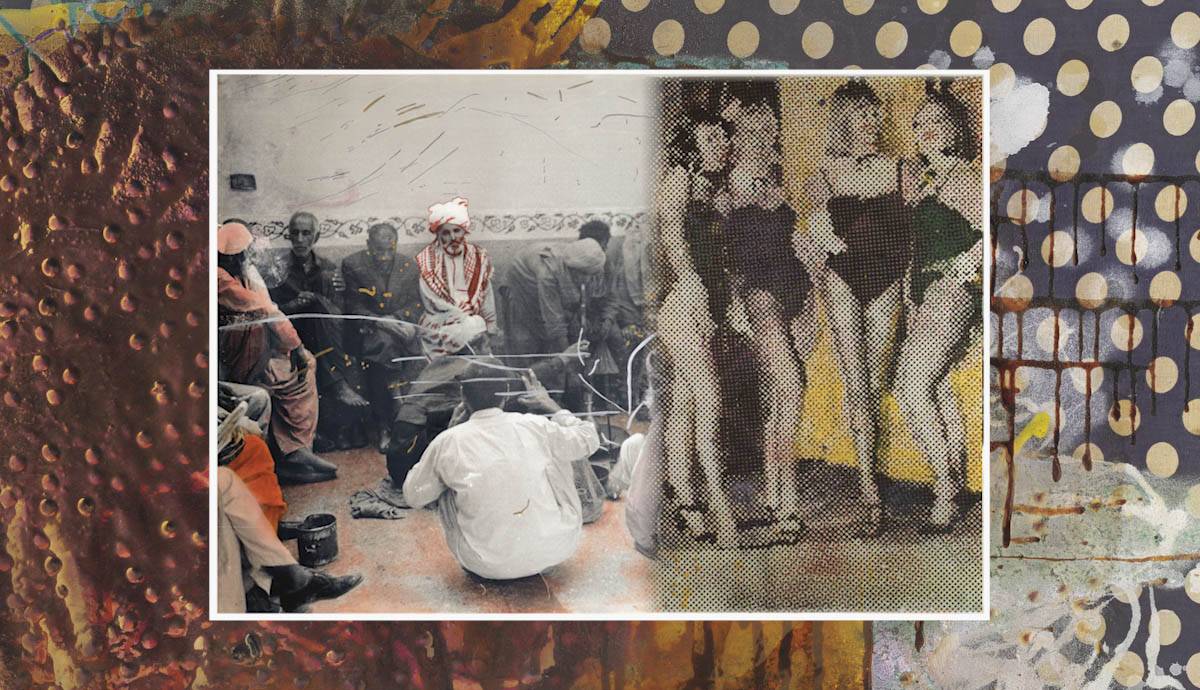 Sigmar Polke was a German artist, active from the 1960s until his death in 2010. Early in his career, he helped found the German art movement called Capitalist Realism. Polke worked across a number of mediums, but his most enduring accomplishments relate to the tradition of painting. For his entire career, Polke was at the forefront of painting’s theoretical upheaval throughout the second half of the 20th century.

Sigmar Polke first came to prominence in the early 1960s as a co-founder of the Capitalist Realism art movement alongside Gerhard Richter and Konrad Lueg. Capitalist Realism is often understood as a German iteration of Pop art, which was gaining recognition in America around the same time. This comparison holds up in regards to the general subject matter of these movements, but there are notable distinctions between the two. While Capitalist Realism also involved pop-cultural imagery as well as the aesthetics of mass production and advertisement, these subjects were contextualized in a different manner than in pop art.

The name of Capitalist Realism suggests it as a counter to Socialist Realism, the official artistic style of the Soviet Union. Polke and Richter had both fled from East to West Germany and were thus sensitive to the differences in attitude towards art between the Soviet Union and the capitalist world. Pop art, in contrast, existed in America, away from the tension between these two worlds and their philosophies. Perhaps, for this reason, the American Pop artists’ work appears more amiable, or at least less overtly critical, of the aesthetics and production methods of capitalism.

Meanwhile, the art of the Capitalist Realists is highly critical. It recognizes both the stifling of expression under the doctrine of Socialist Realism as well as the dire state of the art under capitalism as an increasingly consumerist enterprise. Though the works of these artists are not strictly realism in the traditional, aesthetic sense, they do truthfully reflect the hollow landscape of capitalism and aesthetics driven by the profit motive. Though Polke’s work, of course, evolves throughout his career, a lot of the concerns, first articulated in the founding of Capitalist Realism as a movement, persist. He reckons, in a variety of ways, with the ever-increasing weight of capitalism on art in general and painting specifically.

The Hand-Made and the Mechanical

Sigmar Polke’s work in the early 1960s is characterized by the mimicry of commercial, mass production aesthetics. A number of his paintings from this time depict foodstuffs or other consumer goods and many of the works are rendered with the dot patterns of commercial printing, with bits of color struggling to homogenize into a coherent image. The American Pop artist Roy Lichtenstein famously reproduced commercial printing methods to great effect in his own paintings based on comic book illustrations.

Polke’s works are, however, quite a bit messier than those of his Pop contemporaries in America. These paintings of Polke’s do not demonstrate the same precision as the works of Roy Lichtenstein’s or Ed Ruscha’s, which successfully obfuscate the artist’s hand. Rather, Polke is very willing to reveal his personal involvement in the creation of these images, and their translation into paintings.

In his 1965 painting, The Couple (Das Paar), the mechanical regularity of the dot pattern is interrupted by Sigmar Polke’s splotchy application of paint. Blown up to this size, the image cannot seem to coalesce towards a representation. Instead, we are left to mire in abstraction, threatening to become expressive. Where Lichtenstein speaks to neatness and precision in his appropriation of the printing pattern, Polke indulges the underlying uneasiness, the imperfection of the mechanical image, which he reproduces and expands until the seams split.

Sigmar Polke’s work relies on the tension between the mechanical coldness of his reference imagery and the aesthetics of mass production and advertising, opposed to the inherent expression of a traditionally painted canvas. Even in his prints, which are more direct reproductions of the source imagery, Polke tends to blow the image up to a point of near abstraction, degrading the already cheap dot-printing process into something that begins to suggest expressive gesture by way of its inconsistencies.

Following his artistic blossoming in the 1960s, Sigmar Polke took the next decade to travel. Over the 1970s, Polke went to Afghanistan, Brazil, France, Pakistan, and the U.S. During this time, he shifted his focus from painting and printmaking to photography and film. Polke’s touch remains evident in the works from this era, as does his interest in painting and mark-making. His photographs are scratched, colored, layered, or otherwise manipulated to create unique visual effects.

In the often impersonal medium of photography, Polke allows his authorship to remain evident. Take, for example, Untitled (Quetta, Pakistan: Tea Ceremony), where Polke dashes ink and paint with varying regard to the composition he is defacing. The ground, as well as a few figures, have been lightly toned, and two have been traced over with markers, while a number of seemingly unrelated marks swirls about. It is his tinkering with the image, rather than the image itself which is the focus of these pieces. Moreover, this relates back to his work in traditional mediums in terms of the breakdown of reproducible imagery into something individualistic and expressive.

What would follow for Sigmar Polke, in the late 1970s and 1980s, was a period of intense experimentation with and deconstruction of painting. During this time, Polke made paintings with a variety of non-traditional materials, such as synthetic fabrics, lacquers, artificial resins, and hydro-sensitive chemicals. These works coincided with the arrival of Postmodernism and its incorporation into visual art. Certainly, this stage of Polke’s career is relevant to the Postmodern project of questioning structure and category. Kathreiners Morgenlatte, a piece from 1979, has Polke literally taking apart the canvas and its wooden support, collaging them together.  The imagery in this work recalls Polke’s earlier pop-adjacent paintings, making this function as a reflection on his own previous, modernist work and marking the beginning of a new stage in Polke’s career as an artist.

Though pop imagery never left Sigmar Polke’s practice entirely, moving forward, he would produce many works of pure abstraction. Often, these abstract paintings have the appearance of several paintings, quickly begun and abandoned, layered over each other. In this way, these paintings embody the frightening state of painting in the Postmodern era, as a medium where the space for innovation was seeming to dry up to nothing. As a response, Polke’s works seem to court their own inconsequence, unable or unwilling to completely and coherently articulate any thought out of a sense of purposelessness, eager instead to deny any potential for meaning in the first place.

Certainly, Sigmar Polke’s output from this time exhibits notable differences from his earlier endeavors, however, these works can also be understood as a continuation of Capitalist Realism. In the 1960s, Polke examined the aesthetics of western capitalism through the medium of painting. As of the 1980s, he instead seems to examine the conditions of painting and avant-garde art under capitalism.

For the art world, Postmodernism represented the reckoning of traditional art forms with their increasingly evident incompatibility with the demands of a capitalist system. Easel painting was a relic of a previous order and could only survive as long as it had innovations to make. Modernism sustained itself by this promise of newness. By the mid-20th century, however, newness was running out. The peak of formal abstraction had been mounted, and Pop art was the last frontier: a reconstruction of mass-produced imagery in the form of traditional art. After this, where else could Sigmar Polke go as a painter?

The breadth of material experimentation in Polke’s work at this juncture is an exaggeration for the capitalist demand for novelty;  the cuteness of experimentation restated as a form of knowing kitsch. This is Capitalist Realism in the sense that it is a vision of the terminal logic of Capitalism pressed into art; the unsustainable demand for more, for the new, and for innovation all pile until art cracks beneath them and is immediately devoured. Sigmar Polke’s work at this stage seems to be digging through those picked-at scraps of art, rendered by capitalism.

Starting in the late 1990s, Sigmar Polke would begin to directly incorporate the techniques and methods of capitalist production into his artwork, rather than reproducing their effects by hand. For instance, he produced a number of digitally printed “machine paintings” in the early 2000s, as well as a series of “lens paintings,” where the image is composed of vertically oriented ridges, producing a lenticular motion effect, a common technique in commercial printing. These last works of Sigmar Polke suggest the next insidious stage of art under capitalism, as it becomes, to a greater and greater extent, a mere apparatus of the market, subject to the same incentives and production methods as everything else.