A close look into the life and career of Roy Lichtenstein, legendary POP Art painter and pioneer of comic-book style poster art. 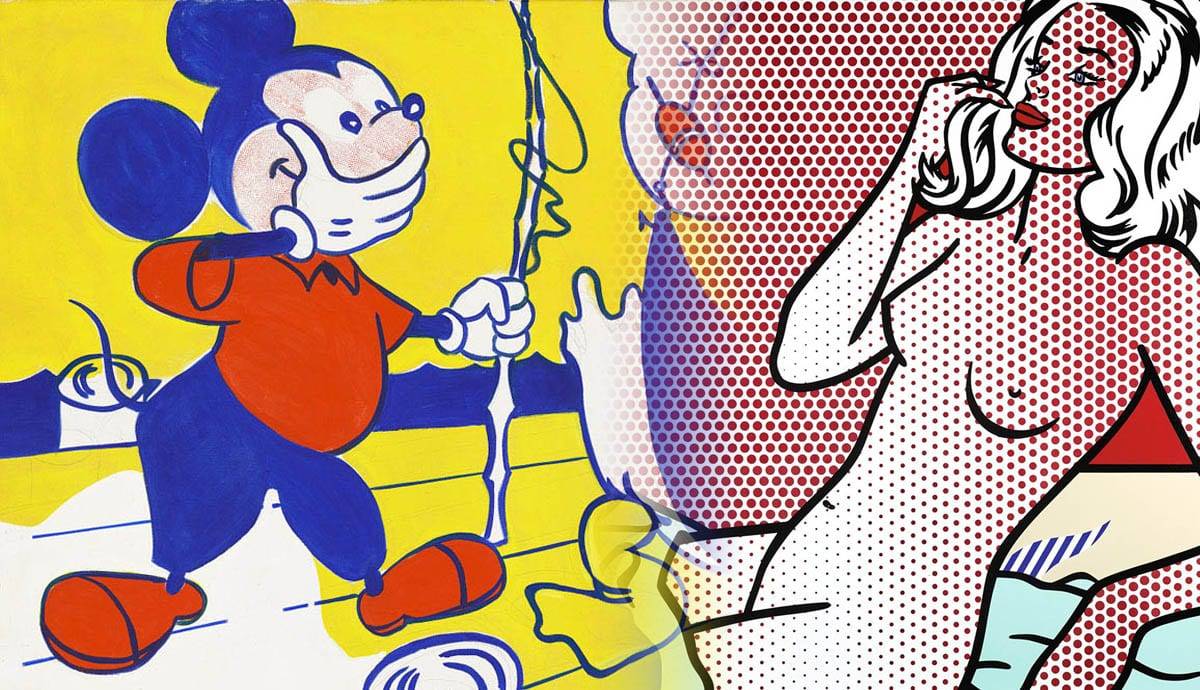 Roy Lichtenstein is known alongside Andy Warhol and Keith Haring as one of the most prolific artists of the POP Art movement. However, his style was subjected to intense scrutiny and criticism at the time of its conception. The lowbrow, popular culture influences of POP Art were relatively unprecedented during its time, sparking debate about the true definition of ‘art’. Today, the movement is remembered as a revolution that changed the function of art and accessibility in society. Below are 10 facts about Lichtenstein, the artist who brought comic-book, Ben-Day dot art into the mainstream.

Lichtenstein developed his love for the arts and creativity during his childhood and was a frequent visitor to the Museum of Modern Art (MoMA) in New York. He also had a lifelong fascination with airplanes and spent much of his time building mini models of them. He then trained as a pilot for World War II but never flew a plane in battle.

He was also musically talented, playing both the piano and the clarinet and starting a jazz band during his high school years. He experimented with drawing during this time and produced several still lifes of his instruments.

Lichtenstein Had An Artistic Education

Lichtenstein grew up on New York’s Upper West Side, where he attended public school until he was twelve years old. He then attended Dwight School, an independent preparatory school in New York, until graduating in 1940. It was during his time that his interest in art began, and he enrolled in summer courses at the Art Students League in New York, where he studied under Reginald Marsh. He also took painting classes during his high school years at the Parsons School of Design. Lichtenstein then attended Ohio State University where he undertook a degree in Fine Arts, studying subjects including design, drawing, literature and history.

He Was Drafted Into The Army

In 1943, after completing three years of study at Ohio State University, Lichtenstein was drafted into the United States Army. He studied engineering as a part of his training at DePaul University in Chicago and then served as infantryman across Europe. He was honorably discharged in 1946 and he returned to finish his Fine Arts degree at Ohio State University, where he then also attended a graduate program and became an art instructor. His war service greatly influenced the subject matter of his work and several of his works, notably Whaam! (1963), depict army aircrafts.

After graduating from Ohio State University, Lichtenstein had his first independent exhibition in New York at the Carlebach Gallery. The show featured three-dimensional assemblage works made of wood, metal and found objects. During this time, his work included Cubist and Expressionist elements. After moving to Cleveland for six years, he then returned to New York and began teaching at the State University at Oswego. This period saw a marked shift in Lichtenstein’s art and the incorporation of Abstract Expressionism in his work.

He also became fascinated with German Expressionism later in his life, mimicking themes and iconography from the Der Blaue Reiter expressionist group and paintings by Otto Dix. He also experimented with woodcut paintings, a medium used by Emil Nolde, Ernst Ludwig Kirchner and Max Pechstein.

His Son Inspired His Signature Style

Lichtenstein’s work is known for its Ben-Day dots and comic-inspired aesthetic and iconography. His first work in his signature style is the painting Look Mickey (1961) which features the characters Mickey Mouse and Donald Duck. It is said that Lichtenstein produced the painting after his son compared his work to a comic book with Mickey Mouse, saying, “I bet you can’t paint as good as that, eh, Dad?”

His work lived in the gap between highbrow and lowbrow art, navigating unprecedented territory by utilizing elements of popular culture. This proved highly controversial and yielded scathing reviews from art critics and the general public, calling him a plagiarist rather than an artist. LIFE magazine released a particularly inflammatory profile on the artist with the title “Is He the Worst Artist in the U.S.?”

Lichtenstein defended his artistic style, however, saying that his comic-book inspirations were what made his pieces resonate with the public. “The closer my work is to the original,” he said, “the more threatening and critical the content.”

He Used Commercial Techniques In His Work

Lichtenstein’s work was also criticized for its lack of artistic flair and creativity. However, this was a deliberate choice by the artist. He used commercial techniques to make his work look as if it was ‘printed’ like a comic book. This included Ben-Day dots and a restricted, four-tone color palette, which was used by comic and poster printers, to get his desired effect.

His developed artistic process included drawing the subject by hand on a small scale, then projecting the subject onto a larger canvas. He then outlined the work and colored it in with his Ben-Day dots, color palette and thick, comic-style outlining.

His Work Grew To Popularity In The 1960s

During his time teaching at universities, Lichtenstein had met and befriended other resident artists such as Allan Kaprow and George Segal. After he began to work in his signature style, Kaprow, recognizing the radicalism in his paintings, introduced Lichtenstein to prominent art dealers and galleries in New York. The most notable among these was the Leo Castelli Gallery, which was a leading contemporary art dealer. Despite initial reservations, Castelli chose to represent Lichtenstein, and he was exhibited alongside Andy Warhol, George Segal and James Rosenquist among others. The show sold out and made Lichtenstein notorious in the contemporary art world.

He Invented The Rotating Easel

In order to make commercial commissions easier, Lichtenstein created a rotating easel. This allowed him to paint at any angle and helped him maintain continuity in his monumental style pieces. His easel design was the first of its kind, becoming the prototype for the many styles of rotating easels that exist today.

His Most Expensive Painting Was Done In The Cubism Style

While Lichtenstein was known for his signature comic-book style and Ben-Day dots, he also produced prominent works in other styles. His painting Woman with Flowered Hat (1963) done in the Cubism style sold in 2013 for an astonishing $56.1 million, making it his most expensive piece ever purchased. It was inspired by Dora Maar au Chat (1941) by Pablo Picasso and was painted in a typically Cubist composition. However, its block primary color palette is characteristic of Lichtenstein’s other comic-inspired pieces.

He Made A Film

Lichtenstein collaborated with filmmaker Joel Freedman to produce a film entitled Three Landscapes (1971) in Los Angeles. The film was a three-screen installation that included painting, comic strips and collage and focused on a series of landscape works done by Lichtenstein between 1964 and 1966. It originally aired at LACMA’s 1971 Art and Technology show and was re-exhibited at the Whitney Museum in its original 35mm style in 2011 and then again in 2013 at the Tate Modern.

His Work Expanded Later In His Career

During the 1960s, Lichtenstein began to experiment with different artistic mediums. He incorporated external materials and elements into his work including Rowlux and Plexiglass. He also worked with ceramics and sculpture, producing massive-free standing brushstroke pieces in a cartoon style.

The subject matter of his work also saw more variation. He began to produce nudes in his signature style. He also duplicated masterpieces originally by artists including Paul Cézanne, Piet Mondrian and Pablo Picasso. These were done in his technique and with his color palette, including stylistic details typical of his other works.

During the 1970s-80s, Lichtenstein also became associated with the Pop-Surrealism movement. His piece Pow Wow (1979) is notable among these, as well as a series of paintings created between 1979-81 feature Surrealist elements and Native American thematic inspiration.