HomeArtistsGuillaume-Joseph Roques: 10 Things To Know About The French Artist

Guillaume-Joseph Roques: 10 Things To Know About The French Artist

The work of Guillaume-Joseph Roques captures the tension between Neoclassicism and Romanticism which characterized 19th century art. 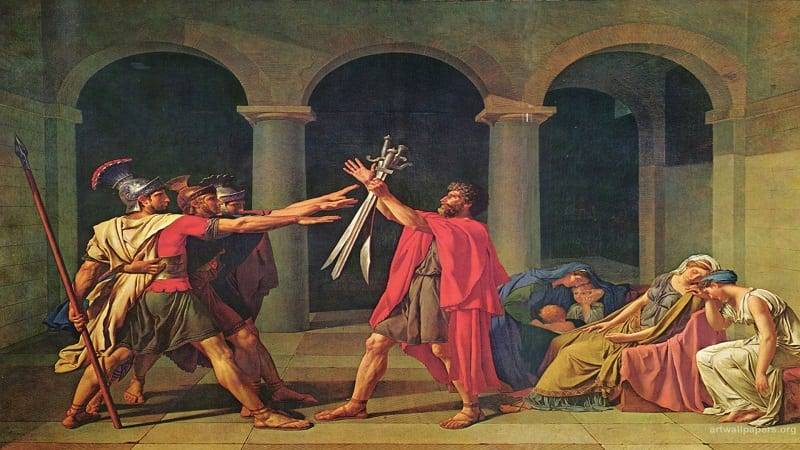 10. Guillaume-Joseph Roques Lived Through One Of History’s Most Turbulent Periods

Roques’ country went through huge political and social change during his lifetime, inspiring some of France’s most compelling artwork. Born in 1757, he witnessed the final years of the French monarchy as a young man. Then the French Revolution began in 1789, when he was 32, and caused huge social upheaval and radical cultural change.

Soon after, Roques found himself living under the new and short-lived French Empire ruled by Napoleon. After the Emperor’s defeat came the Bourbon Monarchy, and then the July Monarchy, which came to an end only a year after Roques’ death in 1847. The range of different constitutional and ideological influences asserted by these governments generated a wealth of new ideas and emotions in the work of France’s artists.

The French Revolution drew much of its inspiration from the principles of the Roman Republic, which had also played a great role in the American Revolution of the previous decades. Likewise, Napoleon deployed classical imagery as a political tool, attempting to legitimize his empire by reflecting the great leaders of the ancient world.

As a result, antiquity began to feature more and more heavily in the period’s art. French paintings started to evoke the values of classical art which had re-emerged during the Renaissance, specifically the emphasis on balance, symmetry, harmony and proportion. This influence, which eventually became the Neoclassical movement, appears in Roques’ work, particularly his depiction of architectural structures, which reflect the buildings and design of the ancient civilizations.

Romanticism grew alongside, and in contention with, Neoclassicism during the late eighteenth and nineteenth centuries. The Neoclassical movement represented and valued the ancient ideals of simplicity, harmony, and balance, and therefore came into conflict with the contemporary Romantic movement, which conveyed bold and striking passion.

Although Roques’ early paintings demonstrate a tendency towards the former, later in life his style developed, becoming less ordered and more detailed. This change is most clearly conveyed by his female portraits, such as Portrait de Madame Sermet. Here the woman sits in a relaxed posture, gazing nonchalantly at the viewer while the top of her dress slips down. The fabrics around her are not formally draped or hanging cleanly but are instead gathered randomly so that the light reflects off of the opalescent material.

7. Roques Was Inspired By The Artists Of Toulouse

Roques was born in the city of Toulouse, where he lived for most of his life. Removed from the political and cultural epicenter of Paris, there was nonetheless a local painting tradition to inspire the young artist. In 1726, the artist Antoine Rivalz had opened the city’s first drawing school, which was later transformed into the Royal Academy of Painting, Sculpture and Architecture of Toulouse.

Rivalz taught at the Academy, which began to send an increasing number of students to Paris and Rome, where many won prestigious art prizes. Jean-Baptiste Despax, another professor at the school, worked with Rivalz on a number of great pieces, including the stunning paintings inside Toulouse’s Carmelite Chapel. Although Despax died while Roques was still in his teens, the aspiring artist would undoubtedly have been familiar with the local masterpieces around his city.

6. Roques’ Paintings Were Greatly Praised During His Lifetime

Roques exhibited his work in many of France’s notable salons and was awarded the coveted first prize at the Royal Academy in Toulouse. This honor meant that he received a trip to Rome to pursue his artistic endeavors, funded by the Académie, which he took in 1778.

Back in Toulouse, he was later commissioned to paint a series of works depicting the life of the Virgin Mary for the basilica of Notre-Dame de la Daurade. Roques spent ten years on this project, and in 1820 the pieces were finally placed on the choir walls in the ancient church. In a travel journal from 1832, a visitor describes the work:

‘The choir is superb, and surrounded by the most beautiful pictures, illustrative of scenes in the life of the Virgin Mary. The execution and designs of all these paintings are truly admirable, and in that of the Annunciation, particularly, the figure of the Virgin is perfectly lovely’.

Jacques-Louis David, perhaps France’s most famous painter at the time, had produced The Death of Marat in 1793, showing the murdered revolutionary Jean-Paul Marat. Later that year, the city of Toulouse held a commemoration for Marat and enlisted Roques to create a new and original painting of the assassination.

The similarities in David and Roques’ depictions lead art historians to believe that the latter traveled to Paris to view the former’s masterpiece in detail. Yet, despite the similarities, they show, Roques’ work is far more natural and realistic. He does not romanticize or stylize the murder but shows the corpse slumped and yellowing, blood floating on the surface of the shadowed bathwater.

4. Guillaume-Joseph Roques Was An Early Exponent Of Pastels

Scholars believe that Roques was one of the French artists to help bring pastel color into the mainstream. Pastels had been used in Renaissance Italy, but sparingly to add highlights to chalk drawings, and although there had been an increase in their appearance across the sixteenth and seventeenth centuries, there remained an emphasis on line and form over color in drawings.

During the eighteenth century, however, the art of drawing became more widely appreciated, winning a status closer to that of paintings, and thus pastels came to be appreciated as a means of bringing life to this medium. In fact, in 1701 the Royal Academy at Paris accepted its first ‘painter in pastels’. Roques is thought to have continued this trend and exhibited several works of pastel in France’s salons, although critics have not been able to ascertain the exact number.

3. Roques’ Greatest Legacy, However, Lies With His Students

Although a highly competent artist himself, Roques’ greatest work can be said to have been his teaching. After studying there, he worked as a professor at the Academy in Toulouse, a choice that his father seems to have disapproved of, telling him to die there!

Despite this inauspicious start, Roques’ career as a teacher was hugely successful, largely thanks to his most famous student, Jean-Auguste-Dominique Ingres. The young Ingres inherited Roques’ admiration for the artists of the Renaissance, notably Raphael; his influence would later be apparent in Ingres’ paintings, as he went to become the symbolic head of the Neoclassical movement.

2. Roques Encouraged And Trained A Number Of Young Artists, Including His Own Son

A document from 1797 records that Roques arranged for his own son, Guillaume, to accompany Ingres on a trip to Paris. While there, the two young men were to study under the era’s most famous painter, Jacques-Louis David, whose Death of Marat Roques himself had been inspired by earlier in his career. It appears that the son followed in the father’s footsteps by becoming a painter, although only two pieces can be attributed to him for certain. A third, depicting a peach, is speculatively assigned to the younger Roques.

Roques was also responsible for the artistic education of a number of other painters, including Pierre-Roch Vigneron, Charles Brocas and the superbly-named Jean-François-Etienne-Joseph Victor Cazes. The work and renown of these men, however, was largely limited to the city of Toulouse and Ingres undoubtedly stands out as Roques’ star pupi.

Roques’ extant oeuvre is small, and is held almost entirely by the Musée des Augustins in his native city of Toulouse. Despite its limited size and fame, the paintings capture an important moment in the history of art, bridging the gap between the two defining movements of the age: Neoclassicism and Romanticism.

Moreover, Roques’ greatest legacy lies not in his own renown or wealth, but in the inspiration, he offered to his pupils, in particular the young Ingres, who would go on to become one of France’s most famous and lauded artists. Later in life, Ingres would recall the moment that he saw a copy of a Raphael painting made by Roques. He stated that it was ‘like a star that had fallen from heaven’.

Barbara Kruger: Politics and Power
By Rosie Lesso, in Artists
What Type of Artist Was Pierre-Auguste Cot?
By Idalis Love, in Artists