One of the Nazi Party’s most powerful military commanders, Hermann Goering positioned himself as a major art collector, once boasting of having the largest private art collection in Europe. 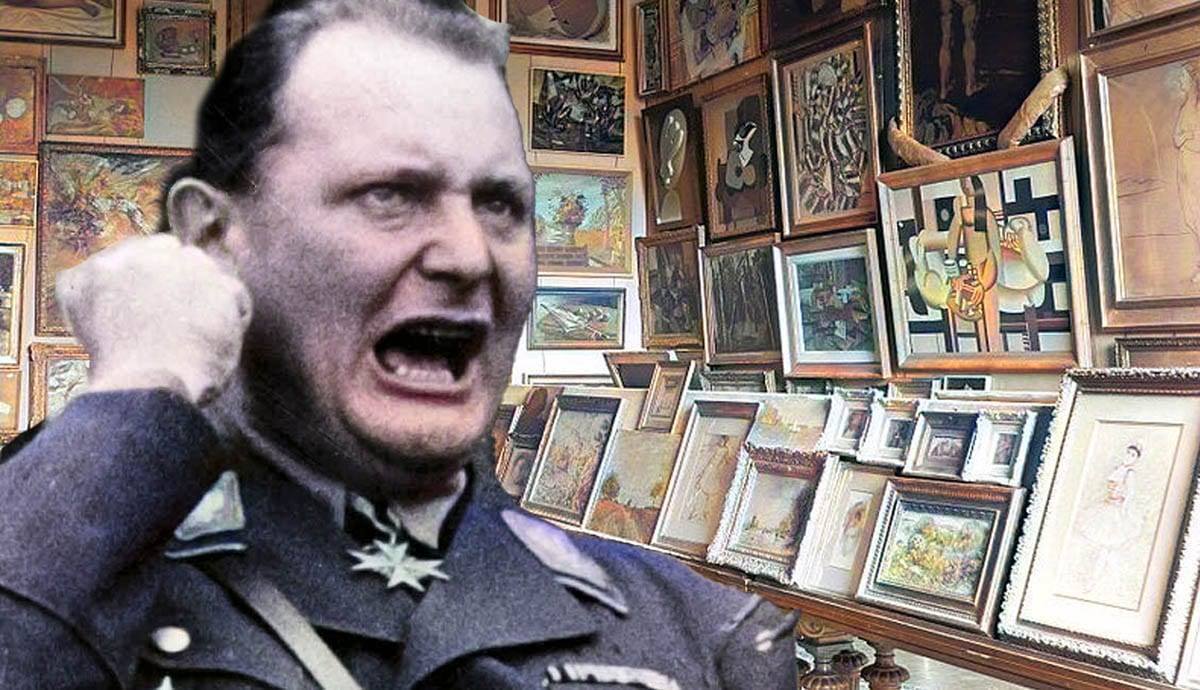 The organized looting of art and other works from conquered European territory was a strategy deployed by the Nazi party, of which Hermann Goering was a chief proponent of. In fact, at the height of Nazi power in the early 1940s, a genuine power tussle between Hitler and Goering developed. Read on to learn more about the art looting done by the Nazis.

It is known that Hitler himself was denied admission to the Vienna Academy of Fine Arts early in his life, but saw himself as a connoisseur of the arts. He viciously attacked modern art and its dominant trends of the time – Cubism, Dadaism and Futurism, in his book Mein Kampf. Degenerate art was the term used by the Nazis to describe many artworks created by modern artists. In 1940, under the aegis of Adolf Hitler and Hermann Goering, the Reichsleiter Rosenberg Taskforce was formed, headed by Alfred Rosenberg, a chief ideologue of the Nazi Party.

The ERR (as it was abbreviated in German) operated in much of Western Europe, Poland, and the Baltic States. Its chief purpose was the cultural appropriation of property – innumerable works of art were either irretrievably lost or burnt in public, though the Allies were able to return many of these pieces to their rightful owners.

Goering Was A Man of Expensive Pursuits

Raphael’s Portrait of a Young Man that was looted by the Nazis from the Czartoryski Museum is regarded by many historians as the most important painting missing since World War II. Raphael was not the only famous artist sought by Hitler’s second in command. Hermann Goering zealously guarded and treasured masterpieces by Sandro Botticelli, Claude Monet, and Vincent Van Gogh.

When the Nazis were defeated, Goering attempted to load all of the booty at Carinhall into trains towards Bavaria, blowing Carinhall behind him. Though a lot has been permanently lost or destroyed, Goering’s handwritten catalog listing almost 1,400 works was stored in his country home near Berlin. A conservative estimate pegs Hermann Goering to be acquiring at least 3 paintings a week. In 1945, the New York Times estimated the worth of these works to be two hundred million dollars, a whopping 2.9 billion dollars in today’s money!

In general, Hermann Goering lived a life of extreme luxury and opulence. He was fond of the ‘finer things’ – from jewels to zoo animals, and a heavy morphine addiction. Every year on his birthday, the 12th of January, Hitler, along with the Nazi top brass, would shower him with art (and other expensive items). Such was the scale of his collection, that they lay around carelessly in his hunting lodge without regard for presentation or origin or appreciation. They had been acquired from the museums and private collections of Western European nations, particularly those owned by the Jewish community.

Upon his cross-examination at Nuremberg, Hermann Goering claimed to be acting as a cultural agent of the German state, rather than for personal gain. He also admitted to his passion for collection, adding that he wanted a small part, at least, of what was being confiscated (a mild way of putting it). His own expansion in tastes is a marker of the simultaneously expanding power of the Nazis. A study of the Hermann Goering ‘art catalogue’ points to a dominant interest in European Romanticism, and the nude female form, which soon paved way for hungry acquisitions of the artworks. It is worth noting that two other people in his life were strong forces behind his artistic zeal – his wife Emmy (who was obsessed with French Impressionists like Monet), and the art dealer, Bruno Lohse.

Lohse has acquired the notorious distinction of being one of history’s chief art looters. Swiss born Lohse was a strapping young SS officer, fluent in French, and had obtained a doctorate in art history. He was a confident trickster, a manipulator, and schemer, who caught Hermann Goering’s attention upon the latter’s visit to the Jeu de Pume art gallery in Paris in 1937-38. Here, they developed a mechanism wherein the Reichmarschall would select those artworks looted from the French Jewish community. Goering’s private trains would take these paintings back to his country estate outside Berlin. Hitler, who thought that modern art and its dominant forms were ‘degenerate’, would have the best artwork kept aside for himself by Lohse, while several artworks by artists like Dali, Picasso, and Braques were burnt or destroyed.

The Jeu de Paume became Lohse’s hunting ground (Goering himself personally visited the museum some 20 times between 1937 and 1941). Van Gogh’s ‘Langlois Bridge at Arles’ (1888) was one of the several priceless artworks sent by Lohse, from the Jeu de Paume in Paris, via private train to Goering’s country home.

Though Lohse spent a brief period arrested after the defeat of the Nazis, he was released from prison in 1950, and became a part of a shadow network of former Nazis who continued to deal stolen artworks with brazen impunity. These included masterpieces of dubious origins, that were lapped up by American museums. Hermann Goering was so eager to have a Vermeer, that he traded 137 looted paintings in exchange

After Lohse’s death in 1997, dozens of paintings by Renoir, Monet, and Pisarro were found in his bank vault in Zurich, and in his Munich home, worth many, many, millions.

The manifold effects of the Nazi plunder cannot be underestimated. To start with, the cultural appropriation and the urgency of acquisition and destruction serve as a reminder that forces like the Nazis seek to conquer the realm of art and culture. This cultural appropriation is also an attempt at owning history and possessing the elusive through war and violence.

Secondly, a chronological documentation, like Hermann Goering’s written art catalog, points to the changing shift in Nazi power on the outside. The acquisitions became increasingly associated with the ‘great’ artists of Western Europe, especially the art that was developed during and after the European Renaissance between the 14th and 17th centuries. It also sheds an interesting light on the private opulence and excesses of the Nazis, especially the elite.

Third, the effects on contemporary art and scholars, especially Jewish academic art historians like Erwin Panofsky, Aby Warburg, Walter Friedlaender, to name a few, were profound. This led to a ‘brain-drain’, with some of the most prominent Jewish scholars and intellectuals fleeing to foreign institutions. In this process, the US and the UK were the biggest beneficiaries, as their universities offered generous gestures of welcome in the form of grants, aids, scholarships, and visas. Financiers too fled across the Atlantic, and the birth of bigger movements in the visual world, like Hollywood, commenced as a result in the 1940s.

Finally, it would be fair to argue that Hermann Goering was a plunderer and looter, rather than an art collector. As second-in-command to Adolf Hitler, he oversaw innumerable horrific campaigns on the cultural wealth of Europe, and the pillage of entire facets of crucial and irretrievable history. This, of course, is in addition to the bloodshed under his leadership waged across the expanse of Western Europe, and the millions of lives lost as a consequence.

By Tejus MenonBA (Hons) Political ScienceTejus is a contributing writer and performance artist based in India and has a BA Hons in Political Science from the University of Delhi. He is a Butoh dancer and theatre maker with a focus on making interdisciplinary work. He enjoys the outdoors, from sailing in the Arabian Sea to hiking in the high Himalayas.