HomeArtistsFemale Artists in the Spotlight: Exhibitions, Auctions, and More

Female Artists in the Spotlight: Exhibitions, Auctions, and More

There has long been a popular misconception that historical female artists did not exist in any meaningful way. Now, we are (belatedly) realizing that this simply isn’t true. 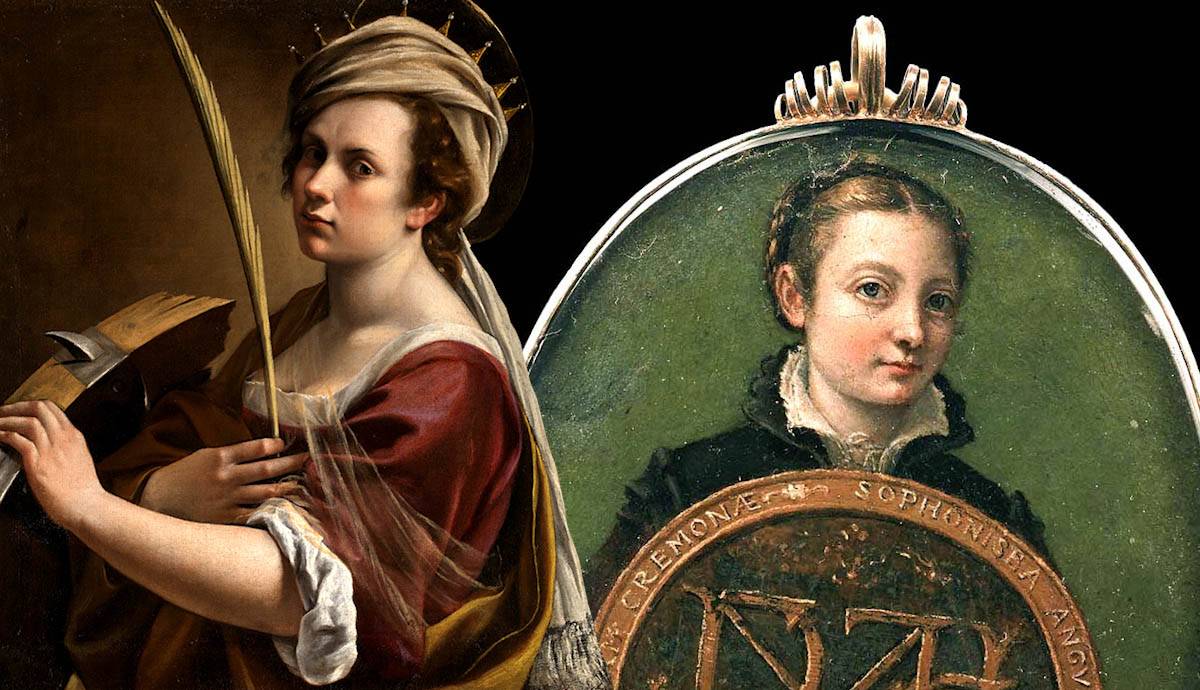 In the past, historical female painters, sculptors, and printmakers rarely appeared in museums, college courses, or art history books.  However, recent scholarship on historical female artists, an increasingly popular field of study, has challenged these assumptions and led to a re-assessment of how women fit into the art historical conversation. It turns out that there have been more, and more significant, female artists than we knew. Research projects are uncovering forgotten artworks languishing in storage, re-attributing works mistakenly given to male artists, redefining what we know about careers, and even resurrecting once-successful artists entirely missing from the history books.

In 2019, conservators at London’s Simon Gillespie Studios found Artemisia Gentileschi’s signature on a David and Goliath painting that had previously been attributed to a male artist. Three major museums held much-talked-about solo exhibitions of historical female artists. Researchers resurrected the career of Florence nun and painter Plautilla Nelli, as well as numerous others. Scholars have recently published new volumes on Baroque prodigy Sofonisba Anguissola and Venetian portraitist Rosalba Carriera. They have also recognized Giovanna Garzoni and Fede Galizia for their prominent roles in Italian still-life painting.

Writers and illustrators collaborated on graphic novels about African-American sculptor Edmonia Lewis (Seen: Edmonia Lewis) and Japanese contemporary artist Yayoi Kusama (Kusama: The Graphic Novel). New biographies of female artists, from well-known to obscure, abound. While gender parity in the art world is still, unfortunately, some way off, there’s no question that historical female artists are enjoying prominence like never before.

Despite the pandemic, 2020 was a surprisingly good year for historical female artists. To honor the centennial of the 19th Amendment which gave American women the right to vote, the Baltimore Museum of Art in Maryland pledged to purchase only works by women in 2020. Most of Baltimore’s 53 acquisitions were contemporary, but numerous other museums have begun to acquire and display more works by female artists of all time periods.

Both the Metropolitan Museum of Art and the Frick Collection received gifts of artworks by women. The Met acquired three by Italian nun and painter Maddalena Orsola Caccia. Two of them, a pair of silhouette-like still lifes, now appear in the recently-rehung Old Masters galleries. Caccia has been little known up until now, but her inclusion in such a major museum will surely change that.

Around the same time, the nearby Frick Collection received two pastel portraits by Venetian artist Rosalba Carriera. Carriera is also the subject of a new book. Angela Oberer’s The Life and Work of Rosalba Carriera (1673-1757): The Queen of Pastel (Amsterdam University Press, 2020) is the first-ever volume on Carriera to be published in English. The Frick’s two new works by Carriera appear for the first time in the museum’s temporary installation in the Breuer Building on Madison Avenue. In honor of their debut, the Frick featured its two new pastels on the March 26, 2021 episode of the museum’s wildly popular YouTube series Cocktails with a Curator.

Amsterdam’s celebrated Rijksmuseum announced earlier this year that it will add works by 17th-century Dutch artists Judith Leyster, Gesina ter Borch, and Rachel Ruysch to its Gallery of Honor, home to long-celebrated masterworks by the likes of Vermeer and Rembrandt. These are not new acquisitions. Ruysch’s Still Life with Flowers in a Glass Vase entered the Rijksmuseum’s collection all the way back in 1814, and Leyster’s The Serenade joined it in 1908. Their display might be belated, but its significance cannot be overstated. Every time a museum chooses to include a female artist in its galleries, whether in the permanent collection or as part of a special exhibition, it not only introduces artists and their work to the museum-going public but it also makes convincing arguments for these women’s place in art history.

The J. Paul Getty Museum in Los Angeles purchased Artemisia Gentileschi’s Lucretia in March 2021. However, it was the acquisition of another Artemisia painting, Self-Portrait as Saint Catherine of Alexandria, by London’s National Gallery in 2018 that inspired one of the 2020s most talked-about exhibitions. Artemisia was the artist’s first major show in the United Kingdom, and it included works from collections all over the world. Despite being delayed due to the pandemic, the Artemisia exhibition opened in late 2020 to great acclaim. Through the exhibition and catalog, curator Letizia Treves helped promote the view that Gentileschi’s art is worthy of its own attention and should not be overshadowed by the story of her rape trial.

Gentileschi was already well known, no doubt in large part because of the dramatic details of her life. The subjects of two other recent critical and popular hits, on the other hand, may have been less familiar to most viewers. These were 20th-century figurative painter Alice Neel, subject of the Met’s 2021 retrospective Alice Neel: People Come First, and spiritual abstract painter Hilma af Klint in the Guggenheim’s 2018-19 Hilma af Klint: Paintings for the Future. Klint was meant to have another exhibition in Australia earlier this year, which did not get to open due to the pandemic. There is still hope for the New Zealand leg of its agenda.

Many more exhibitions featuring historical female artists are scheduled to take place in the near future, pandemic permitting. For example, the Wadsworth Atheneum in Hartford, Connecticut recently opened By Her Hand: Artemisia Gentileschi and Women Artists of Italy, 1500-1800. The exhibition includes another recently-rediscovered Artemisia painting, Mary Magdalen in Ecstasy, alongside other works by Artemisia, Sofonisba Anguissola, Rosalba Carriera, and others.

Even auction houses are starting to highlight female artists. So far in 2021, both Sotheby’s and Christie’s have curated entire sales of works by diverse female artists. Sotheby’s held (Women) Artists in London on May 27, 2021, which featured 57 artworks from the 16th-century to the present. Christie’s had Women in art in Paris on June 11, 2021, which included letters and manuscripts by George Sand, Edith Piaf, and Marie Curie in addition to artworks by 18th through 20th-century female artists and designers.

Even as early as 2019, Sotheby’s was promoting The Female Triumphant, a grouping of works by historical women within the January 30 Old Masters sale in New York. This event included a mixture of relative stars and lesser-known names: Angelica Kaufman, Artemisia Gentileschi, Elizabeth Vigée-le-Brun, Giulia Lama, Michaelina Wautier, Marie-Victoire Lemoine, and Fede Galizia. It is unclear whether such sales and promotional efforts actually increase the prices female artists achieve at auction, but they certainly point to collectors’ increased interest in purchasing works by these artists.

Many of the past few years’ headlines about female artists have stemmed from an Italian group dedicated to art conservation. The Advancing Women Artists Foundation (AWA) worked for over a decade to bring the historical women artists of artistically rich Florence back to light through restoration efforts. At its inception, AWA leaders identified thousands of artworks by women artists in the storage rooms of Florentine museums. In many cases, the existence of these works was news to the museum curators responsible for them. Because AWA expressly aimed to get works by female artists into the public eye, any institution to benefit from its efforts had to promise to put the conserved work on permanent display afterward.

Philanthropist Jane Fortune’s discovery of nun and religious painter Plautilla Nelli (1524-1588), and her subsequent dismay over the poor condition of her surviving works, inspired her to found AWA. The foundation restored several of Nelli’s works and helped to carve out her rightful place in art history. Most significantly, AWA restored her large Last Supper, which is the earliest known example of a female artist’s interpretation of this complex and religiously significant subject.

About 70 successful restorations later, most recently two large paintings by Violante Ferroni in the atrium of the hospital of San Giovanni di Dio, AWA disbanded in June 2021. However, its work and advocacy continue to have an impact. In fact, Save Venice, a group that has sponsored art restorations in Venice for the past fifty years, has just announced its intention to run a similar program.

It’s important to recognize the socially imposed limitations women have historically faced in becoming successful and recognized professional artists. However, there is now plenty of evidence to suggest that quite a few were able to rise above these challenges. It is no longer valid to say that there weren’t really any historical female artists, or that none achieved any mainstream success. It isn’t true that the only way to include historical female artists in art history and museums is to go far outside the conventional canon of media and styles.

Historical female artists did make great work, completed important commissions and both participated in and influenced the wider art world. In fact, they did it as early as the 16th century. For obvious reasons of opportunity and the limitations of social conventions, we are never going to find as many top-notch historical female artists, or even historical female artists of any rank, as male ones. However, we are discovering quite a few who can easily fit onto any list of great artists. There are quality examples of women working in nearly any artistic style you might enjoy. Finding them is getting easier every day.