Spiritual ideas and occult movements played an important role in Hilma af Klint’s abstract art. Her paintings served as a depiction of her spiritual knowledge, research, and experience. 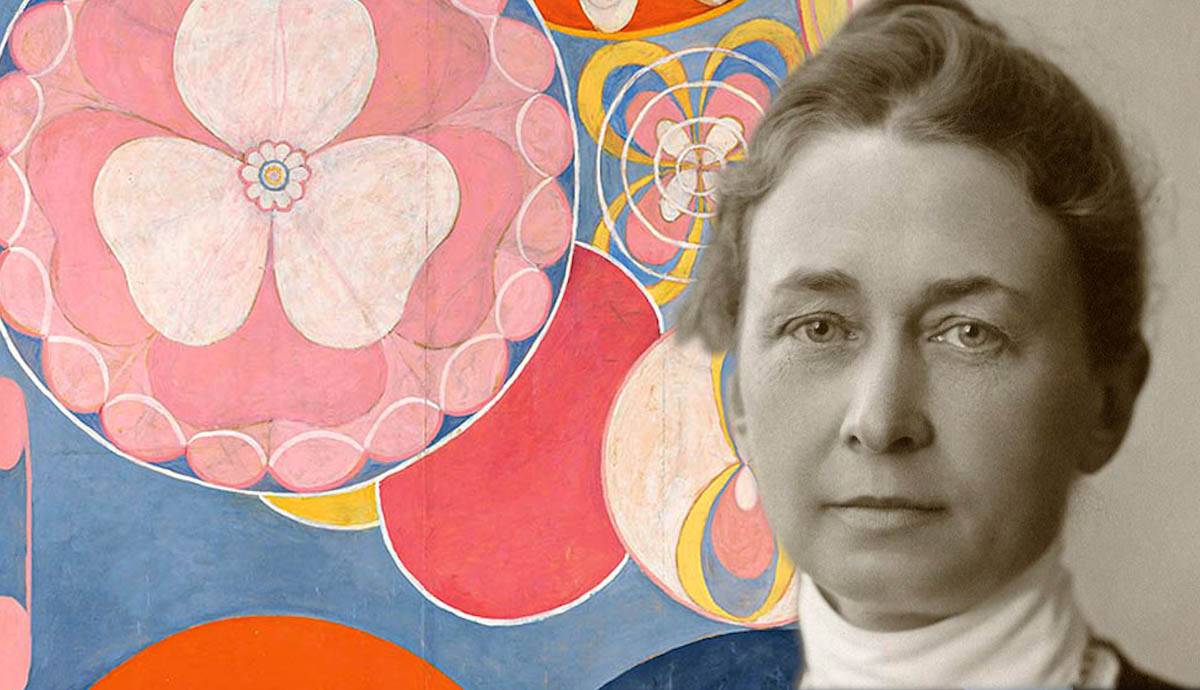 Spiritual and occult movements were very popular in late 19th and early 20th century Europe and America, especially among artists. New inventions and scientific discoveries such as X-Rays made people question their everyday experience and look for something beyond the limits of ordinary sensory perception. Hilma af Klint was no exception. Her paintings were heavily influenced by spiritualism. Af Klint’s work is not only one of the first examples of abstract art, but also an illustration of various occult ideas, spiritual movements, and her own experiences during séances.

Hilma af Klint was born in Stockholm in 1862. She died in 1944. When she was only 17 years old, she participated in her first séances during which people attempted to communicate with the spirits of the dead. After her younger sister Hermina died in 1880, af Klint became even more involved with spiritualism and tried to contact her sibling’s spirit. The artist joined several spiritual and occult movements during her lifetime and studied some of their teachings intensely. Her art was greatly influenced by her connection to the Theosophical movement and she also drew inspiration from Rosicrucianism and Anthroposophy.

The Theosophical movement was founded by Helena Blavatsky and Colonel H.S. Olcott in 1875. The word “theosophy” comes from the Greek terms theos – which means god – and sophia – which means wisdom. It can therefore be translated as divine wisdom. Theosophy supports the idea that there is a mystical truth beyond human consciousness that can be accessed through a transcending state of the mind, such as meditation. Theosophists believe that the whole universe is one single entity. Their teachings also represent the thought that humans have seven stages of consciousness and that the spirit gets reincarnated. Hilma af Klint depicted all these ideas in her abstract art.

Rosicrucianism has its roots in the 17th century. It was named after its symbol, which depicts a rose on a cross. Members of the movement believe that ancient wisdom was passed on to them and that this knowledge is only available to Rosicrucians and not to the general public. The esoteric movement combines aspects of Hermeticism, alchemy, and Jewish as well as Christian mysticism. The influence of Rosicrucianism on Hilma af Klint’s work is documented in her notebooks. She also used symbols of the Rosicrucian movement in her abstract art.

The Anthroposophical movement was founded at the beginning of the 20th century by the Austrian philosopher Rudolf Steiner. The movement’s teachings postulate that the human mind can communicate with an objective spiritual realm through the intellect. According to Steiner, to perceive this spiritual world the mind must achieve a state free from any sensory experience.

Hilma af Klint and The Five

Hilma af Klint and four other women founded a spiritual group called The Five in 1896. The women met regularly for sessions during which they would communicate with the spirit world through séances. They performed their sessions in a dedicated room with an altar exhibiting the Rosicrucian symbol of a rose in the middle of a cross.

During the séances, the women allegedly made contact with spirits and spiritual leaders. They called the leaders high masters. Members of The Five documented their sessions in several notebooks. These séances and conversations with the high masters eventually led to the creation of af Klint’s abstract art.

The Paintings for the Temple

During a séance in the year 1906, a spirit called Amaliel allegedly commissioned Hilma af Klint to make paintings for the temple. The artist documented the assignment in her notebook and wrote that it was the largest work she was to perform in her life. This series of artworks, called The Paintings for the Temple, was created between 1906 and 1915. It features 193 paintings that are divided into various subgroups. The general idea of The Paintings for the Temple was to depict the monistic nature of the world. The works should represent that everything in the world is one.

The spiritual quality of the series is also apparent in Hilma af Klint’s description of its making: “The pictures were painted directly through me, without any preliminary drawings, and with great force. I had no idea what the paintings were supposed to depict; nevertheless I worked swiftly and surely, without changing a single brush stroke.”

The paintings of the group Primordial Chaos were the first of Hilma af Klint’s extensive series The Paintings for the Temple. They were also her first examples of abstract art. The group consists of 26 small paintings. They all depict the origins of the world and the Theosophical idea that everything was one at the beginning but was fragmented into dualistic forces. According to this theory, the purpose of life is to reunite the fragmented and polar forces.

The shape of a snail or spiral visible in some of the pictures of this group was used by af Klint to illustrate evolution or development. While the color blue represents the female in af Klint’s work, the color yellow illustrates masculinity. The use of these predominant colors can therefore be interpreted as the depiction of the two opposite forces, such as spirit and matter, or male and female. Hilma af Klint said that the group Primordial Chaos was created under the guidance of one of her spiritual leaders.

Instead of being guided by the high masters, like when working on her previous group Primordial Chaos, af Klint’s creative process became more independent during the making of The Ten Largest. She said: “It was not the case that I was to blindly obey the High Lords of the mysteries but that I was to imagine that they were always standing by my side.”

Paintings in the group The Ten Largest represent different stages of human life by illustrating childhood, youth, maturity, and old age. They also illustrate how we are connected to the universe. Hilma af Klint displayed different states of human consciousness and development by painting bright geometrical shapes. The artist explained the works in her notebook: “Ten paradisiacally beautiful paintings were to be executed; the paintings were to be in colors that would be educational and they would reveal my feelings to me in an economical way…. It was the meaning of the leaders to give the world a glimpse of the system of four parts in the life of man.”

Paintings in the group The Ten Largest show various symbols that are characteristic of af Klint’s art and her involvement with spiritual ideas. The number seven, for example, refers to the artist’s knowledge of Theosophical teachings and is a recurring theme in The Ten Largest. In this series, the symbol of the spiral or snail is a representation of the physical as well as the psychological human development. The almond shape that occurs when two circles intersect, like in the painting No. 2, Childhood, symbolizes a development resulting in completion and unity. The shape is a symbol from ancient times and is also called vesica piscis.

The Altarpieces are the last works of Hilma af Klint’s series The Paintings for the Temple. This group consists of three large paintings and was supposed to be placed in the altar room of the temple. Af Klint described the architecture of the temple in one of her notebooks as a round building with three stories, a spiral staircase, and a four-story tower with the altar room at the end of the staircase. The artist also wrote that the temple would exude a certain power and calm. Choosing to place this group in such an important room in a temple shows the significance of her Altarpieces.

The meaning behind the Altarpieces can be found in the Theosophical theory of spiritual evolution, which is characterized by a movement running in two directions. While the triangle in No. 1 of the Altarpieces shows the ascension from the physical world to the spiritual realm, the painting with the triangle pointing downwards illustrates the descending from divinity to the material world. A wide golden circle in the last painting is an esoteric symbol of the universe.

Spiritualism and occultism had a significant impact on Hilma af Klint’s abstract art. Her paintings show a very personal representation of her spiritual journey, her beliefs, and the teachings of the various movements that she followed. Since af Klint felt that her art was ahead of its time and could not be fully understood until after her death, she stated in her will that The Paintings for the Temple must not be exhibited until twenty years after her death. Despite the fact that she did not receive acknowledgment for her abstract art during her lifetime, the art world eventually recognized her vitally important achievements.

Hilma af Klint: 6 Facts About A Pioneer In Abstract Art

Hilma af Klint: 6 Facts About A Pioneer In Abstract Art