HomeArtists5 Key Motifs in the Art of Pierre-Auguste Renoir

5 Key Motifs in the Art of Pierre-Auguste Renoir

Pierre-Auguste Renoir painted everything from flower arrangements to the human figure. Here are his five main artistic subjects. 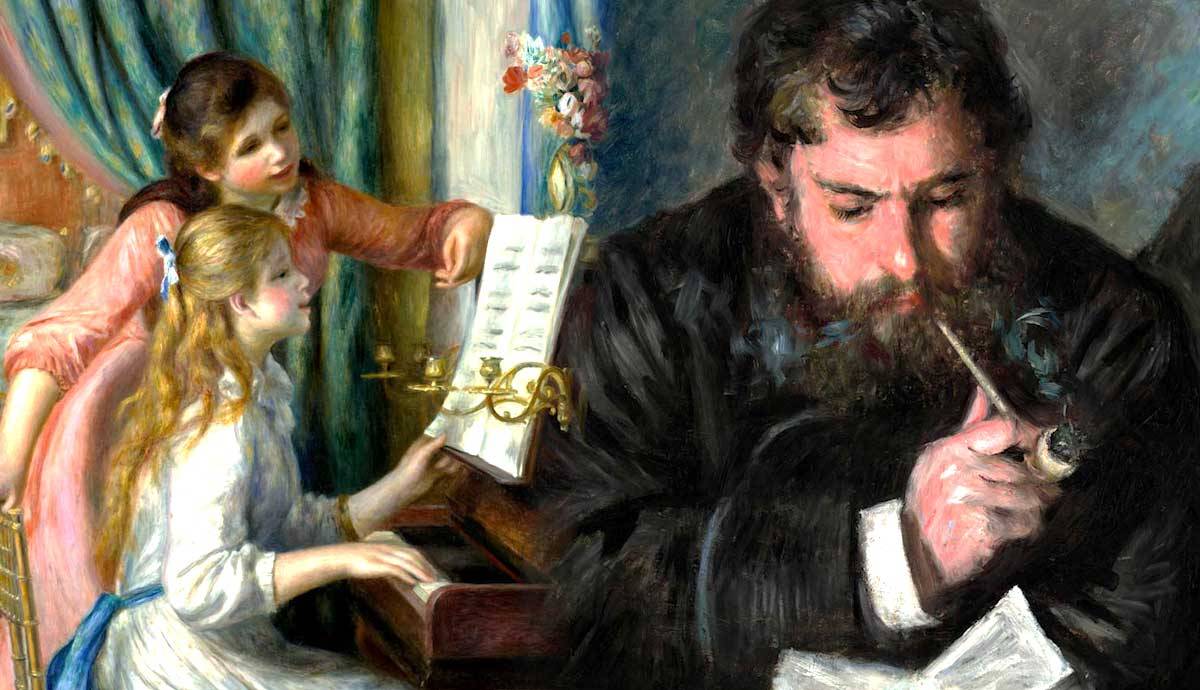 Impressionist master Pierre-Auguste Renoir (1841-1919) tried his hand at almost every genre known to European painting. Alongside the Impressionist standbys of landscape paintings, still-life arrangements, and scenes of modern Parisian life, Renoir’s love of painting the human figure set him apart. His success in portrait painting earned him spaces at several Paris Salons, while his explorations of the female nude kept him closer to the academic tradition than most of his modernist contemporaries. He was a modern update on the Old Masters, with softer brushwork and modern subject matter. Although Renoir was not the only modern artist interested in bringing aspects of classicism to modern painting, he did so in a style entirely his own.

Pierre-Auguste Renoir and the Human Figure

Renoir’s fondness for depicting the human figure always set him apart from the other Modernists. This is not to say that he was the only modern artist to include human figures in his compositions. His fellow French artists, including Edgar Degas and Edouard Manet, also painted many people within the scenes of modern life they were so famous for. These figures appear at ballet rehearsals, racetracks, opera houses, cafés, dance clubs, and more. Even Monet painted people on occasion.

However, Renoir focused on the human form for its own sake, not simply for its relevance to the modern scene. He became particularly interested in figure painting after visiting Italy in the early 1880s, where he was influenced by classical and Italian Renaissance art, both of which heavily featured the male and female nude. He largely abandoned the softer, undefined mode of suggesting human figures he had used over the prior decade and became one of the few Impressionist artists to follow the time-honored tradition of sketching from nude models. His paintings are full of people, both clothed and nude.

Renoir was the only Impressionist to work significantly as a portrait painter, an area in which he was prolific. His portraits even gained him entrance into several Paris Salons, prestigious annual art exhibitions that typically excluded most of the Impressionists on account of their unconventional tendencies. It seems that Renoir was not as happy with the role of an artistic rebel as were his friends. He still considered Salon success a necessity, writing in 1881 that “In Paris, there are barely fifteen collectors capable of liking a painter without the backing of the Salon. And there are another eighty thousand who won’t buy so much as a postcard unless the painter exhibits there.”

Renoir started painting portraits and other figure paintings in the 1860s, and they gave him his first Salon successes before his association with the Impressionists. A period of Salon rejections led him to exhibit at several of the first Impressionist exhibitions, but Renoir was back in the Salons by the late-1870s with portraits like that of Madame Georges Charpentier and her two children. A series of portrait-painting successes provided Renoir the financial security to travel, experiment, and eventually break from Impressionism. Some of this security came from the patronage of banker and diplomat Paul Berard starting in the late 1870s. In addition to completing commissioned portraits for Berard, Renoir grew close to the family and even spent summers with them, when he painted all six family members both formally and informally.

Not all of Renoir’s paintings showing people were necessarily portraits, or at least not commissioned ones. His oeuvre includes countless images of well-dressed, middle-class French people, predominantly women and girls. They appear either singly or often in pairs and enjoy activities like reading, music, or sewing. Although officially anonymous, scholars have identified many of the models as the artist’s friends and neighbors. Several of these pleasant, reassuring scenes of friendship, leisure, and home life number among Renoir’s most iconic paintings. They follow in the long tradition of domestic genre scenes that dates all the way back to the Dutch Golden Age, but Renoir updated it for 19th-century France.

In addition to Renoir’s aforementioned paintings of anonymous young women, he also made many images of the female nude. They often appear in some stage of the bathing process, whether drying themselves off in their homes or bathing in outdoor streams and lakes. The idea of painting bathers or other nudes in a landscape was not unique to Renoir. It has occupied a place in art history all the way back to Giorgione and Titian (artists Renoir admired in Italy) and had been more recently seen in the works of Gustave Courbet and Edouard Manet. Paul Cezanne would take it up as well, despite its associations with conventional European painting.

It was in his images of bathers that Renoir ventured the closest to being a traditional, academic artist. These works demonstrate an increased emphasis on academic-style drawing, tighter brushwork, and careful planning. They stray quite far from the Impressionist aesthetic of rapid paintings conveying ephemeral moments. However, Renoir’s continued use of brilliant colors, looser handling of background elements in distinct contrast to the figures, and inclusion of outdoor lighting effects keep these paintings at least broadly connected to the Impressionist camp. Unlike the glossy, highly-finished academic nudes of the time, his brushstrokes almost always remain somewhat visible, even in the figures themselves.

One of the major influences on Renoir’s nude paintings was Peter Paul Rubens with whom Renoir shared love of color and a habit of painting voluptuous female bodies. Renoir’s portrayals of female nudes are not to everybody’s taste. The later ones, in particular, tend towards being exaggerated, oddly proportioned, and lumpy. Fellow Impressionist Mary Cassatt certainly didn’t like them, calling them “enormously fat red women with very small heads.”

In contrast to the timeless motifs of bathers and portraiture, Renoir was equally prolific in the decidedly modern genre of paintings depicting groups of bourgeois Parisians at leisure. The idea of middle-class people having the time and money to enjoy cafes, dance halls, parks, and operas was still quite new in 19th-century Paris, and Renoir’s enthusiasm for the subject was among his most progressive attributes. These paintings include fashion, parties, dancing, flirting, and boating, and they often focus on relationships and interactions between the various figures. Renoir painted such scenes at all phases of his career and in all iterations of his style. Everyone always seems to be having a good time, which is undoubtedly a big part of why his popularity has proven so enduring.

Despite their modern subject matter, these paintings hark back to 18th-century paintings of charming frivolity by artists like Watteau, Fragonard, and Boucher. Renoir had admired all three painters since his early days haunting the Louvre at the beginning of his career. Like those Rococo paintings, Renoir’s are mainly set outdoors. Although he painted them en plein air, he certainly did not create these large, multi-figure compositions in a single sitting. These paintings often feature dappled sunlight as it is filtered through trees and shrubs. Renoir painted these evocative lighting effects better than just about anyone else.

Like most Impressionists, Renoir painted soft and colorful still life and landscape paintings. For Renoir, still-life was a vehicle for trying new things. He said of these works, “When I paint flowers, I feel free to try out tones and values and worry less about destroying the canvas. … I would not do this with a figure painting since there I would care about destroying the work.” It’s difficult to know whether Renoir didn’t particularly value flower paintings, if so, he made a surprising number of them, or he simply realized that it was much easier to start over when there wasn’t a human model involved. Renoir’s still life arrangements included fruits and flowers, usually in simple but harmonious arrangements like those later taken up by Cezanne and Van Gogh.

For all that many of his greatest works involve nature, landscape painting did not form a major part of Renoir’s oeuvre, at least not compared to fellow Impressionists like Monet. He did, however, paint landscapes for their own sake, both in his native France and on his travels to places like Italy and the British Isles. More commonly, he included landscape elements behind and around his figurative subject matter.

The outdoors plays important roles in key Renoir paintings like The Large Bathers and Luncheon of the Boating Party. Even when grass and trees themselves don’t have starring appearances, natural lighting is often a key player in his paintings. Lacking the human figures Renoir was so enamored of, landscape paintings remained the most purely Impressionistic works of Renoir’s output. Although not as well-known as his figural scenes or even still life paintings, his landscapes are still lovely and well worth a look.