The Art of Pierre-Auguste Renoir: When Modernism Meets Old Masters

Pierre-Auguste Renoir might best be described as Impressionism’s answer to the Old Masters. He mixed modern subject matter and Impressionist brushwork with a more traditional approach to the human form. 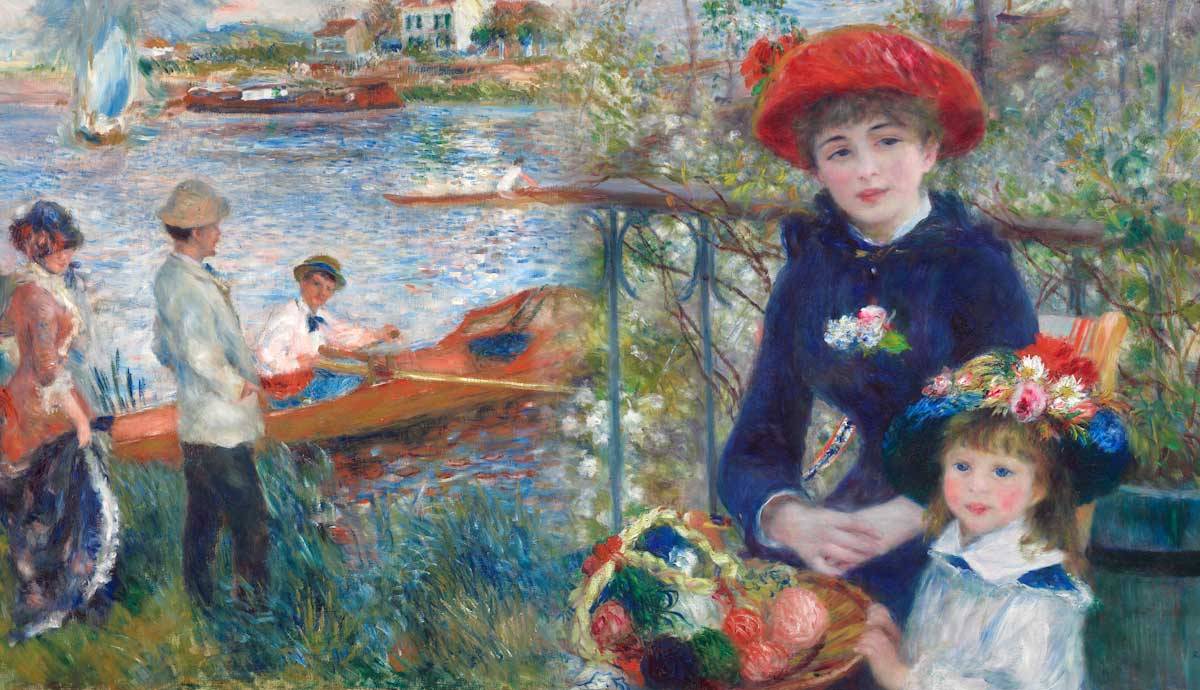 Pierre-Auguste Renoir (1841-1919) is one of the world’s most famous Impressionist painters. He was among the movement’s original members, exhibiting in the first Impressionist exhibition and several subsequent editions. Although he shared the style’s interests in light, color, and modern society, Renoir’s relationship to Impressionism was decidedly ambivalent. His passion for depicting the human form and reverence for the Old Masters both separated him from his Impressionist colleagues.

Pierre-Auguste Renoir began his career as a decorative painter in his hometown of Limoges, an area long celebrated for its production of decorative objects like porcelain and enamels. His first employer was a Limoges porcelain factory. Renoir was successful there but soon left to pursue easel painting instead. A regular visitor to the Louvre, Renoir was captivated by the great French masters, particularly 18th-century painters Antoine Watteau, Jean-Honoré Fragonard, and François Boucher. Like these Rococo predecessors, Renoir enjoyed painting charming scenes of attractive, well-dressed people flirting, interacting, and enjoying outdoor leisure. He also admired 19th-century French artists Eugène Delacroix and Gustave Courbet. Renoir’s love of the Old Masters would stay with him throughout his career.

The artist met his soon-to-be Impressionist compatriots Claude Monet, Frederic Bazille, and Alfred Sisley while studying at the Parisian atelier of Charles Gleyre. He began to paint outdoors (en plein air) with them, adopting their loose, sketch-like style of painting and interest in portraying natural lighting effects. When Monet painted his famous La Grenouillère in 1896, Renoir was right there alongside him, painting the same scene.

Such images of middle-class Parisians at play would become a staple of his oeuvre. Renoir’s paintings from the late-1860s and 1870s are his most strongly Impressionistic, yet he always kept one foot in the more traditional world of academic painting. He continued to value the human form above optical effects, and some of his works were even shown at the Paris Salons. Still the premier French art exhibition at this time, most artists associated with Impressionism struggled to have their works accepted by the Salon. Renoir was sometimes rejected too, which is why he joined the alternative Impressionist exhibitions, but he had several Salon successes.

His portrait subjects included numerous prominent French men and women, including literary hostess Madame Charpentier, pastry chef Eugène Murer, banker Paul Berard with his family, and fellow Impressionist Claude Monet. Alongside his commissioned portraits, Renoir depicted males and females of all ages, including countless children, in more casual paintings. The sitters were often friends and neighbors, and favorite models appeared again and again. Some of Renoir’s most iconic paintings depict well-dressed, middle-class women and girls sitting around, playing the piano, sewing, or reading. They appear singly or in groups, indoors or in nature.

The Crisis of Impressionism

After exhibiting in the first few Impressionist exhibitions, Renoir broke away from the movement around 1878. He began to feel that Impressionism was too fleeting, too insubstantial, and too far removed from the great art of the past to be a viable style over the long term. He famously said that he had reached the end of Impressionism. He wasn’t the only artist to feel this way. The sense that Impressionism had taken things too far is sometimes called the Crisis of Impressionism; it spawned the pointillism of Georges Seurat and the formal experiments of Paul Cezanne, to name just two. While those artists responded by innovating further, Renoir looked back to the past, to those Old Masters he had loved during his early days visiting the Louvre.

Renoir’s decision to turn away from pure Impressionism grew even stronger after his 1880 visit to Italy. There, he was inspired by classical art, like the surviving frescoes at Pompeii, and by Renaissance masters like Raphael and Titian. He would also add artists like Rubens and Goya to his list of heroes after subsequent travels. Renoir’s paintings of the late-1870s already appear tighter than those made earlier in the decade, but those he painted after his time in Italy even more obviously looked back to tradition. His figures became more three-dimensional and solid, as opposed to the undefined masses they had previously been.

Renoir also began to paint the female nude. Drawing and painting from nude models had been a significant component of European artistic practice since the Renaissance, but some modernists downplayed or abandoned the habit. For Renoir, however, images of nude women, often shown during or after bathing, joined his more casual paintings of well-dressed, middle-class women and girls. As he was increasingly interested in a more naturalistic representation of the human body, some of Renoir’s nudes and other figure paintings can scarcely be considered Impressionist artworks aside from the style of their backgrounds.

The Art of Composition

Studying Italian art also inspired Renoir to utilize more-carefully planned and balanced compositions. The Impressionists typically eschewed such traditional compositions in favor of cropped, off-center, snapshot-like compositions inspired both by photography and Japanese art. In typical Impressionist fashion, these seemingly-haphazard compositions were meant to mimic real-world viewing experiences, which are rarely balanced or symmetrical and scarcely provide optimal sightlines. Never perhaps as committed an adherent of this practice as someone like Degas, Renoir moved even further from it after his time in Italy.

Residual Impressionist aspects such as brilliant colors and sketch-like brushwork belie the planning that went into Renoir’s later paintings. They seem much more casual than they truly are. Despite painting en plein air, few of his major works were completed in one sitting. He even made preparatory sketches for multi-figure paintings, achieving carefully-controlled compositions that often still appear spontaneous.

Despite his newfound commitment to artistic tradition, Renoir by no means became a conventional academic artist. He is probably more accurately described as Impressionism’s answer to the Old Masters, bringing a modern aesthetic and subject matter to time-honored painting practices. Renoir always shared the Impressionist interest in portraying modern life, though he tended to present an altogether brighter and more optimistic side of modernity than artists like Edouard Manet.

A lover of human interaction, many of his best-loved paintings depict well-dressed Parisians enjoying each other’s company at leisure in restaurants, dance parties, and boating excursions. This was itself quite modern since the idea of the middle classes having the time and resources to enjoy leisure activities was still a novelty at the time. Renoir was always keen to portray the fashionable and cheerful in 19th-century French life, including friendship, conversation, and flirting. He is also famous for his numerous paintings of well-dressed Parisian girls and women, either alone or in pairs, shown while playing music or sitting in gardens.

His nudes as well, although they continue an ancient tradition, are rather ordinary French women at their baths instead of aloof classical goddesses. Even when set in a landscape, as in his multi-figure bather compositions, Renoir managed to avoid both the classicizing air of academic nudes and the scandal of modern nudes like Manet’s The Luncheon on the Grass and Olympia. Though solitary, these figures seem alone but not lonely, and the tone stops just short of voyeuristic, once again setting Renoir’s art apart from that of other modern Impressionist and Post-Impressionist painters of his generation.

Additionally, Renoir’s treatment of non-figurative subjects like landscape and still life paintings, as well as background elements in his figurative scenes, remained soft and Impressionistic. There is a clear difference between his tight, volumetric portrayal of the human form and the looser treatment of everything around it. This contrasts with the works of his Impressionist period, where everything received the same painterly treatment. Regardless of all other stylistic considerations, Renoir’s stunning depictions of light in his outdoor scenes always make his Impressionist ties clear. Nobody has ever done a better job of capturing the appearance of tiny spots of sunlight making their way through a full canopy of tree cover than Renoir in countless outdoor paintings. This bright, intense sunlight contrasts strikingly with intense blue and purple shadows, which are characteristic Impressionist features.

Renoir was a prolific painter, working late into his life despite physical disabilities. He even made a few sculptures in his last decades. This means that his works fill museums all over the world and they tend to be visitor favorites regardless of their subject matter. He is still such a well-received artist today because his works are colorful, pleasant, and visually appealing. His paintings are easy to look at and generally depict accessible and uncontroversial subjects. For this reason, he is an artist who is easy to underrate and many people don’t realize his true significance in seamlessly blending the modern with the established in European painting. In doing so, he became an inspiration for future generations of artists, including those as significant as Pablo Picasso and Henri Matisse.