HomeArtFrench Rococo: The Iconic Works of this Movement

The French Rococo encapsulated playfulness, frivolity, and the fleeting nature of beauty. Rococo art is best represented in the works of Jean-Honoré Fragonard, François Boucher, and Maurice-Quentin de la Tour. 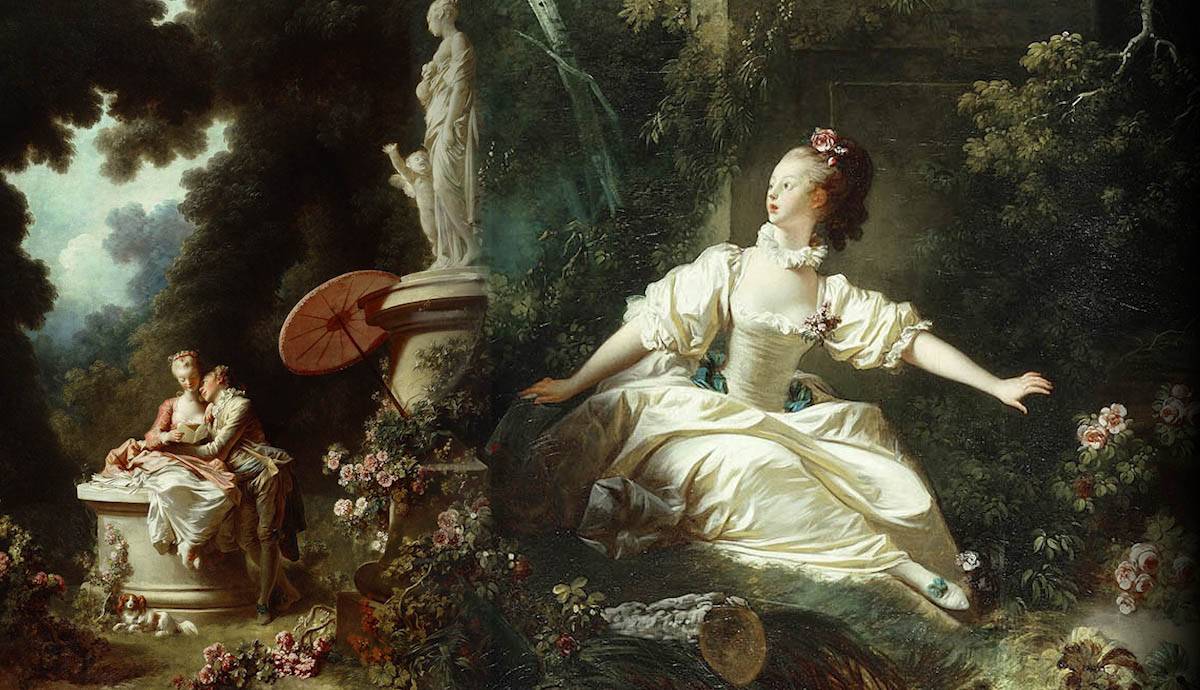 The French Rococo focused on the sumptuous and facetious nature of the French aristocracy and bourgeoisie. Each artist took an aspect of the Rococo movement that could be considered foundational. While these pieces differ greatly from one another they each contributed to the foundation and innovation of the Rococo art movement. From frivolity to elegance, from eroticism to playfulness, each piece that we will see here epitomized all of which one would expect from Rococo.

The Emergence of French Rococo art

During the reign of Louis XV, from 1715 to 1774, the French upper-class was able to experience new social and intellectual freedoms. Wealthier bourgeois and the members of  the aristocracy were now able to focus more on play and pleasure than those during the previous reign of Louis XIV. The sovereignty of Louis XIV was built around the stifling control he had over the French aristocracy— even dubbing himself the Sun King and maintaining a belief in the famous sentence L’etat, c’est moi – The State, it is I.

The frivolous nature of the Rococo art comes from the higher class French people now being able to loosen up and indulge in licentious pastimes instead of the typical staunch and oppressive nature of high society during Louis XIV’s reign. The Rococo also took place during the period of Enlightenment that now led people to question the truths of their time as well as their faith and religion. This allowed the people to loosen up more and have less fear of divine and imperial retribution.

Jean-Honoré Fragonard’s works were almost like the benchmark for the French Rococo art movement. He painted the playful lives of the aristocratic youths. He focused on frivolity and the fleeting nature of beauty. The artist became a master of rendering fabrics, such as velvet and silk, stone, and the time-favored rose.

The Progress of Love series was commissioned by Madame du Barry, one of Louis XV’s mistresses. This series as a whole can arguably be considered the backbone of Rococo art. However, The Meeting is arguably the most popular painting in the series.  The Meeting was the second piece after The Pursuit. Fragonard’s frequent subjects were lovers. The Meeting is set on the estate of the young lady’s parents. The young man we see scales a ladder to visit her. The young couple meets in a hidden grotto on the estate secretly, the girl looking around anxiously to check if she was followed.

The background is brushed with loose strokes creating a more feathery appearance for the trees and fluffy clouds adding to the playful nature of the piece. The lighter pastels add a youthful glow to the young man and woman while also creating another layer of support for the flirty and youthful tones. There are also hints of intense color like the red jacket the man is wearing that is supposed to evoke a sense of passion. We could also look at the blue ribbon on the young lady’s shoes that breaks up the pastel and brightens the piece. His palette and technique exemplify what is expected from the Rococo pieces.

The lovers are surrounded by roses to create somewhat of a love nest while under the watchful eye of Eros and Venus. Eros argues with Venus and wants his arrows back as she confiscates them for allowing the occurrence of forbidden love. Fragonard was known for using allusions to mythology in his works as well as pushing the limits of propriety, which can be seen in Venus’ reaction to Eros’ decision to strike the young lovers. Venus’ confiscation could also convey the hesitancy in the young man as the one who initiated the forbidden dalliance. The Meeting alone can arguably be the example of what makes a piece of Rococo.

Love Letters is another piece from the Progress of Love. In fact, it is the final piece. The Rococo art tended to be theatrical in nature, yet this piece feels like a simple glimpse into an intimate moment. It feels more natural whilst being the perfect stopping point for the tale of young love. The youthful couple sits in remembrance of their courtship, reading the letters they exchanged with one another. They share the same color palette as the flowers creating a sense of mutual love, unlike the different palettes of the two lovers we saw in The Meeting.

Fragonard shows the warmth and intimacy of such liaisons instead of the fear that comes with youthful rebellion. He conveys that courage in love leads to true fidelity that is represented through a dog painted delicately beneath the couple’s feet. Love Letters epitomized the French Rococo as it conveyed the softer, less frivolous side of the movement.

The two pieces spoken of prior do not convey all of the different facets of Fragonard’s Rococo pieces as much of his work tended to be extremely suggestive. The Swing is one of those pieces. It was commissioned by Baron de St. Julien as a portrait of his mistress.

In the painting, the Baron, the man in the foreground, is illuminated by his mistress. He is enamored as he reaches out to her. In the shadows of the right side of the piece lies the mistress’ husband, who was originally intended to be the bishop but that idea was scrapped for it was too scandalous. De St. Julien told Fragonard to put a focus on the woman’s legs. Her legs remained covered, but she is painting kicking one of them out playfully.

On the far left, Eros holds his fingers to his lips symbolizing the secrecy of the affair. The cherubs symbolize the inexcusable nature of the infidelity shown, with one scowling and the other in shock. The mistress’ shoe being carelessly kicked off is an additional bit of playfulness, taking the seriousness out of the indecent encounter.

The light gives the mistress a seductive glow, making her the object of enticement as it filters through the trees. Her husband being covered in shadows conveys his own ignorance about his wife’s affair with de St. Julien. Fragonard romanticized unscrupulous dalliances and adulterous relations often in his early works. Such amorous subjects were frequent during the French Rococo art. Fragonard did not invent the depiction of cheating in art but he certainly made it something worth daydreaming about.

François Boucher: The Ideal and the Odalisque

François Boucher is the most risqué artist out of the three that we are mentioning here. He was suggestive like Fragonard but he favored eroticism much more. If Fragonard was pushing the limits of propriety, Boucher ran straight through them. Furthermore, he made the foundation for the idyllic escapist fantasy of a simple pastoral life in Rococo art. That was something that was not present in Fragonard’s works.

In The Gracious Shepherd, a courtship is taking place between a shepherdess and a shepherd. At least on the surface. Upon looking at the two subjects there is something striking and out of place about them – their clothing! Boucher created fantasies for the upper class in his works, realism was inconsequential when catering to the wiles of the wealthy, outside of the realistic Dutch brushwork that he adopted.

It can be argued that Boucher’s most titillating piece is his Odalisque. An odalisque was a Turkish harem girl. It was a trend of the nineteenth century to depict these ladies. They were also a frequent subject during and after the Orientalist Movement. This style of painting catered to the sexually repressed European culture. Europeans were excited by the idea of a world that was not afraid to explore sexuality in a different way.

The model of this Rococo painting is extremely flirty and inviting as she looks to the viewer, hoping to entice a response. She is not looking directly to us in hopes of maintaining somewhat of an innocent demeanor despite her prone state and the flush of her cheeks and her bottom. This piece lacks the youthful countenance of Fragonard but holds an eroticism that enticed and inspired many during the French Rococo. The work shows Rococo’s famous rich blues and lush fabrics.

La Tour’s Use of Pastel in the Rococo Art

Maurice-Quentin de la Tour was known as one of the most accomplished and celebrated pastel portraitists of the 1700s. After being apprenticed as a painter, he became attracted to the immediacy and rapidly-paced technique of pastel works. It is speculated that this switch may have also happened due to the pastellist Rosalba Carriera who visited Paris in 1719. Carriera was a Venetian painter whose works were also a part of the Rococo art movement.

Maurice-Quentin de la Tour specialized in miniature portraits. During the late 1720s, he finally made his way into the Parisian art market and by 1735 he established a reputation as a portraitist due to his pastels showing Voltaire. Due to his success, he received commissions from a variety of peoples: the royal family, the court, the bourgeoisie, and members of the artistic and intellectual world.

De la Tour’s pastels of Voltaire have very playful gazes with soft intentional renderings. These pieces went on to inspire several copies of this portrait, from engravings to paintings. His use of pastel was extremely casual and informal in nature which contributed to the overall lighter tone of the piece expected of the Rococo art. By the time the artist had a better grasp of Voltaire’s features, he was able to give an even more rendered and almost darling rendition of this multifaceted man. His gaze entices in its own way, tempting one to seek the newly allowed knowledge and understanding of the sovereignty of Louis XV.

His more formal Rococo pastels gave off the same regal look. Portraiture remained an important aspect of French Rococo art. This piece is not necessarily theatrical or frivolous but it is very telling. Madame de Pompadour was Louis XV’s leading mistress and a well-known courtesan of the time. She had the opportunity to entertain great men of the Enlightenment era such as Voltaire and Diderot. She was known for her beauty, talent, and intelligence. She was well versed in the arts, literature and was even known as the arbiter of good taste. Portrait of the Marquise de Pompadour gives off the opulence and detail expected of the French Rococo.

Inside the Brothel: Depictions of Prostitution in 19th Century France