The painting Springtime by Pierre Auguste Cot is considered his magnum opus, representing a culmination of his career as an artist. 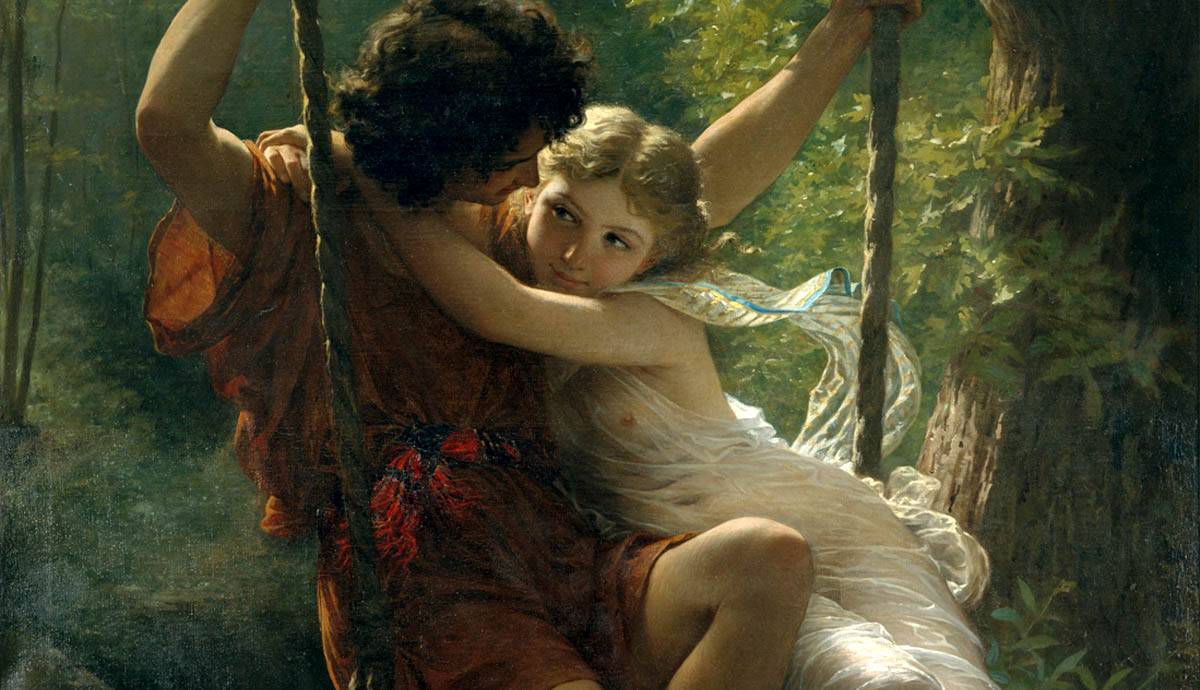 Pierre Auguste Cot created a work that exemplifies everything that people appreciate about spring. From romance to the abundance of nature’s fruits to the warmth, Springtime calls for the viewer to experience the intimacy and beauty of spring. Only with understanding Cot as an artist and the context by which he was creating this wonderful painting can you truly appreciate Springtime. Read on the find out more about this fascinating artwork!

Who Is Pierre Auguste Cot?

Pierre Auguste Cot is a French Academic artist who was best known for his portrait works. However, during his prime years as an artist, he created two works for Catharine Lorillard Wolfe called The Storm and Springtime. Springtime was commissioned first and it was one of his greatest successes as an artist. Working alongside like-minded artists, Pierre Auguste Cot tended toward Classical subjects matters and themes, inspired by Greek subjects and even Shakespearean works. Through his portraiture, he sought to tell stories subtly, but with Springtime he was able to really push the limits of visual metaphor.

Upon first viewing Cot’s Springtime, it can be assumed that you’re looking at a scene of two young people in love. Enjoying the freshly sprung fruits of spring partaking in each other’s attention. It is very easy to infer that their relationship is innocent in nature with the use of the daisy below them, the daisy being a symbol of purity and innocence. First love blooming in spring seems to be the simplest and most surface-level interpretation of this beautifully intimate scene, but with a further understanding of Pierre Auguste Cot, the Academic movement, and how Cot tackled human psychology within his works, Springtime becomes something far more layered than you would think.

The Meaning of Spring and Its Influences

Spring itself has many connotations in the art world: renewal, fertility, purity, youth, beauty, love, and even frivolity. Within Cot’s Springtime, many of these messages come through. In Springtime most of these aspects of spring shine through literally and symbolically. In Cot’s painting, there is another layer that seems to give credence to the Grecian Goddess of Spring Persephone. It should be specified that the Academic movement was a combination of the Neoclassical and Romantic movements. The importance of the Classics shone through which is why we could assume that Greek mythos had a role to play in even this painting.

While it is not completely clear, Benjamin Robert Haydon’s work Heracles and Persephone, despite not being dated, appears to be from the Neoclassical movement. Haydon was actually a known Romanticist, but considering the subject matter of the work and his active years, it can be inferred that he dabbled in the Neoclassical style as well.

If you look to Persephone, you can find similarities to our young lady in Springtime. The blonde hair, the pale skin, and the thin translucent material of her Grecian clothing align extremely well. It could have easily been a coincidence but considering his active years versus Haydon’s, it doesn’t seem too far-fetched that this is where the inspiration came from for his young woman who seems to be a representation of spring.

During the nineteenth century, the roles of women were more defined than ever due to the Napoleonic Code which created further gender inequality amongst the bourgeoisie. A woman’s role was strictly within the family now. Women’s obligation was to take care of their husbands and children, but a woman’s husband came first and foremost. Not only that, women were considered to have “erotic power [that] would disturb masculine and rational space[s],” so they no longer dressed to entice and accentuate their assets. They now dressed like the above, as they were “slaves to social conventions” and their clothing embodied that ideology. During this era of art, this surely began to show through.

The feminine nude form was still definitely desired within the arts, especially within the Academic movement which coveted the study of the nude form. However, due to the more conservative nature of the eighteen-hundreds, there was a specific expectation when displaying the nude female form. Those expectations were the following: they would be of age, they were goddesses or mythical beings of some sort, and they were not being displayed in a lude way, sensuality had to be tasteful. So, when looking at Springtime you will notice that a few of these rules were broken, particularly at first glance.

The young girl is not fully clothed in Springtime, wearing a sheer garb that hugs her body, allowing her bare body underneath to be shown. This girl is obviously younger and doesn’t look like the usual adult woman. Pierre Auguste Cot does not display her in a manner that is untoward, but such a thing was still considered quite scandalous. However, if you look at the girl beyond the surface, why Cot made such a decision will make more sense.

The Influence of the French Rococo, Neoclassicism and Romanticism

The Neoclassical movement definitely contributed to the overall construction of the figures in this piece. From the male form so reminiscent of Eros to the whimsical nature of the fabrics surrounding the girl to the feminine arch of her feet, it just screams Neoclassic! There is also the overall draftsmanship which is expected due to Academicism’s emphasis on Neoclassical draftsmanship. However, that is until you look at the piece as a whole with its use of Romantic coloring, as expected from Pierre Auguste Cot as someone who studied Academicism. There is also the warm intimacy and flirtation displayed by the youths that the French Rococo was so fond of.

The abundance of greenery in Springtime is provided by the French Rococo first and foremost as it has a direct correlation to youth and fertility. You can see the parallels in Boucher’s Spring with abundant greenery and loving youths. Coinciding with the coloring that the Romantic movement prided itself in, and that used to represent a quintessential aspect of the Academic movement, the piece is extremely well rounded.

Another artwork that we must mention here is the Romantic painting called The Bathing Pool by Hubert Robert, which shows the type of nature-focused scenes that Pierre Auguste Cot would have studied and used as inspiration for what many consider to be his magnum opus. Unlike how Haydon felt like speculation, Robert feels more seeped in realism, it seems even more plausible that Pierre Auguste Cot would have been interacting with Robert’s work. The Bathing Pool’s coloring feels very similar to Cot’s Springtime because the Romantic movement had specific standards for the colors used, and with scenes like this you get more idealized yet realistic depictions of nature, unlike the Rococo which is idealized in an extremely frivolous and floaty way, with its feathery textures and abundance of flowers.

The Academic Movement Through Cot’s Eyes

Pierre Auguste Cot believed in symbolism and visual metaphors. Cot wanted his paintings to be more than just what a person saw on the surface. He wanted his works to go into the psychology of the subject matter, be it through the lens of an individual to an idea.

His Ophelia and Mother with two children are examples of such. The artist wanted the viewer to really empathize with the subjects instead of just viewing them. Not only that, he wanted you to be able to infer based on the details that he gave you. This is why it can be stated that there is so much more to Springtime because Pierre Auguste Cot’s work has proven that there is always more.

After seeing Pierre Auguste Cot’s Springtime for all of its individual parts it is even clearer that there is more to it than a pretty scene with two beautiful people. With knowing the context and understanding of Cot’s work, there is an even deeper interpretation of this seemingly whimsical piece. Springtime is indeed about youth, love, and renewal, but it is also about youth’s relationship with spring itself.

The young woman that the young man is interested in seems to be a representation of spring. Why could we assume this? Well, because of how she is so scantily clad and the robes billow around her, the wind appears to not interact with the young man. The young girl is depicted in a goddess-like manner which leads us to believe that she is mythical in nature, making her scant clothing less inappropriate. She embodies the beauty and warmth that was so often associated with spring at the time. The young man interacts intimately with her as he has no choice because spring brings this out of all, but most definitely the young. He is completely consumed, while she looks back at him lovingly, inviting him to partake in all of what spring has to offer.

Women’s Fashion: What Did Women Wear In Ancient Greece?

The Genius of Antonio Canova: A Neoclassic Marvel