HomeArtFemale Nudity In Art: 6 Paintings And Their Symbolic Meanings 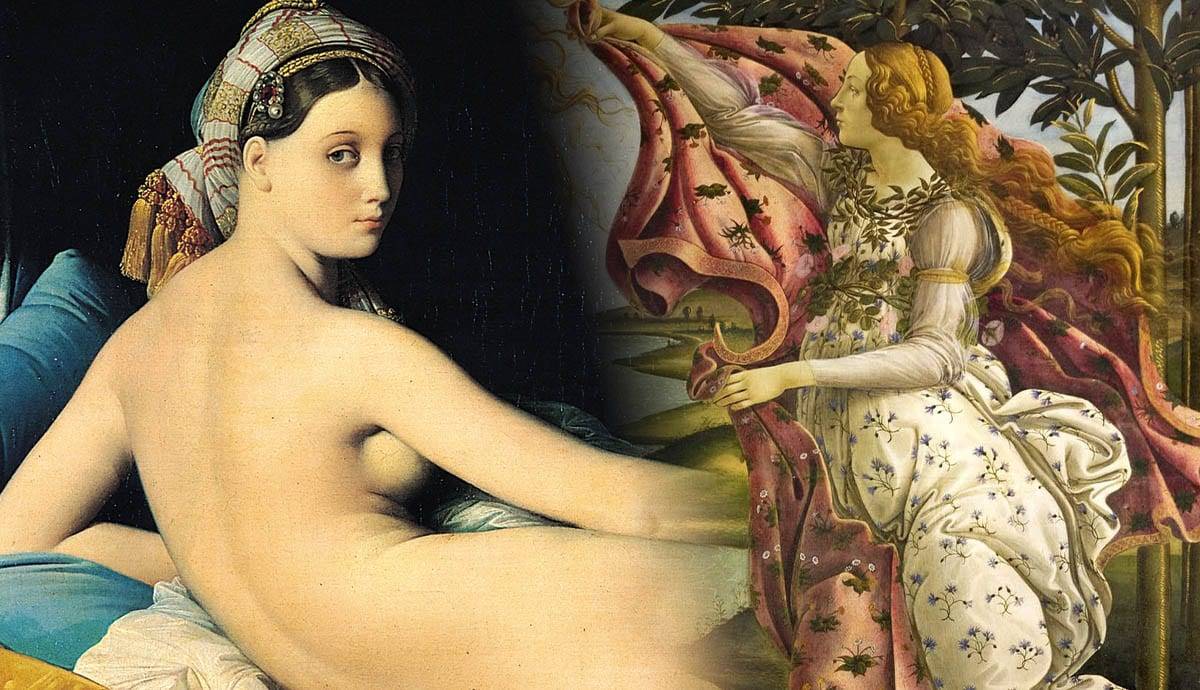 Nudity and art have been connected since the beginning of humanity. Female nudity in art, divine or mortal, became a fascinating and shocking symbol. For centuries, artists have been accused, absolved, marginalized because of the subjects but at the same time gained admiration, glory, and acceptance. Take a look at these six seminal paintings of female nudes and find out more about why they became so important for the history of art.

Female Nudity In Art Over Time

In ancient times, artists weren’t allowed to paint nudity in art, unless they were depicting mythical figures or supernatural beings. Until the 19th century, it became a rule that the female nudes in painting should have a prototype. The naked human body provided the key link between a set of ideas, beliefs, and values. The artist could, therefore, use the nude form as a pretext to aspire to feminine beauty or reinforce dominant ideologies of modern society.

“As female nude, woman is body, is nature opposed to male culture which in turn, is represented by the very act of transforming nature, that is, the female model or motif, into the ordered forms and color of a cultural artifact, a work of art.”

Venus of Urbino is one of Titian’s best-known paintings and a reference to the Sleeping Venus of Giorgione, which was created two decades earlier. However, Titian chose to transfer his Venus into a scene of everyday life, creating a connection between the figure of a goddess with that of an everyday woman. The painting was commissioned by the Duke of Urbino, Guidobaldo Della Rovere, as a present for good luck for his bride.

In the period referred to as the High Renaissance, depicting a naked woman in a painting was very provocative unless she was an ancient goddess. What demonstrates this painting’s influence is its ability to inspire some of the greatest artists. The Venetian master paints the female nude in a manner that recognizes the desires of the male beholder. In this artwork, Titian, indeed, established new compositional rules for the female nude, revealed the role of sexuality in art, and promoted social and political messages.

Titian places his Venus in an everyday setting in a splendid palatial interior. This way he connects the idea of a divine woman with that of an ordinary woman. The figure represents the Venus of marriage. She is the perfect representation of the classic renaissance woman that symbolizes love, beauty, and fertility. Seems rather calm and confident in her nudity, as a symbol of both sexuality and innocence. Resembling the pose of Venus Pudica, she keeps the left hand covering her groin.

Many elements in this painting relate to nuptial imagery and decorations of bedrooms after weddings.  The rose flowers in the hands and the myrtle in the window is an allegory of married life; the dog, curled into her feet symbolizes fidelity, while the rounded feminine belly is the eternal symbol of childbirth and the continuation of life.

Let’s see how Ingres showed female nudity in art! The painting was originally commissioned by Caroline Murat, Queen of Naples and sister of Napoleon, as a gift to her husband. The artwork itself is seen as a departure from Neoclassicism. What’s most important for Ingres is the sensuality of the figure, showing female nudity in art in a new way.  At first glance, it seems that he is following the tradition of the reclining nude, like Titian’s Venus of Urbino. Although Titian painted a nude woman in a classical setting, Ingres painted a woman in a lush Orientalist one. The odalisque functions as a French fantasy inspired by North Africa and the Middle East.

He changed the theme of the mythological nude to an imaginary oriental one. This we can see through the silk draperies, the peacock feather fan, the turban, the hookah pipe, the enormous pearls, and the cool palette tones. The elongated features, like the long arms and back, reveal a mannerist influence, in an attempt of the painter to give a sense of grace and elegance. The subject matter of the painting is the odalisque – a concubine of a rich man in the East. By placing the woman within an Oriental setting, Ingres was able to depict a European nude with frank eroticism that was made acceptable by the context seen in the painting.

Dutch master Rembrandt van Rijn created his mythological masterwork, Danaë, as an ethereal representation of female nudity in art.  Danae represents a Greek mythological figure that inspired artists from every period. According to the myth, she was a princess of Argos and her father locked her away in a tower to make sure she would remain a virgin. The mystery created around Danae’s outstanding beauty appealed to Zeus who impregnated her by transforming himself into a shower of gold.

In Rembrandt’s painting, Danäe is depicted very naturally, lying on the bed naked. She becomes aware of the divine presence, which takes the form of a warm golden Eros. Rembrandt rendered the scene as naturally as possible, to draw attention to the leading figure. The intimacy of the atmosphere echoes the stylistic influences of the Italian Baroque.

Rembrandt’s version represents the picture of a naïve and enchanted woman anticipating the arrival of her beloved. He rejected the ideal beauty in favor of a more realistic form of a woman. Thus, his Danaë appears nobler and finer than the ideally formed nudes of other masters. He chooses to emphasize her enchanted glow and the charm of her femininity, her curvy body, and round belly. The painting represents Rembrandt’s conception: the sexual woman is neither a saint nor sinner, a victim nor seductress, but a participant in full humanity.

The emergence of the female nude as a genre begins with the Renaissance. An icon of the Italian Renaissance and one of the most renowned and universally loved paintings – Birth of Venus by Sandro Botticelli. During that period, depicting a woman in full nudity, except for Eve, was very innovative. The figure of the naked Venus in this work, who is born into the real world as a woman, is not chosen in terms of symbolism to emphasize the humility of the body, but to state the externalization of female eroticism, which combines idealism and sexuality.

In the middle of the painting, the goddess of love rises from the water. In fact, the painting doesn’t show the birth of Venus but rather her arrival in a colossal scallop shell. The positioning of her hands conveys her modesty. The goddess is shown in the position of Venus Pudica, covering her nudity with her hands and long hair. The painting is open to many symbolic interpretations. For example, the connection between the birth of Venus from the waters and the birth of the soul from the water of Baptism. Also, Venus is seen as the personification of the Mother, the feminine principle, which manifests itself in its nakedness, a symbol of purity. Botticelli’s Venus enhances the Neoplatonic view that physical beauty equals spiritual beauty. The contemplation of physical beauty lifts the mind, and so does the extraordinary beauty of Venus in the viewer’s minds.

Jean Fouquet is considered one of the most important French painters from the period between the late Gothic and early Renaissance. Fouquet’s painting “Virgin and Child surrounded by Angels” is considered a masterpiece of the 15th century. Within an abstract setting, the painter depicts Virgin Mary, in white tones, seated on a throne with baby Jesus in her lap. The Virgin’s left breast is left uncovered, while her son is completely naked. The pale tones came in contrast with the bright red and blue hues of the angels surrounding the Virgin. At that time, female nudity in art was only accepted in portrayals of Mary breastfeeding Jesus.

There is a geometrical approach to the figure of the Virgin, with her oval head and perfectly rounded breasts, which refers to the iconography of the nursing Madonna. The elongated forehead, the drawn coiffure, the pointed chin, the sensual neck, and the bare breast are idealized forms that reflect courtly fashions of the time and the emphasized sexuality. However, the Virgin’s face is believed to be an idealized portrait of the mistress of King Charles VII of France, Agnes Sorel. Known for her extraordinary beauty and wit, she overshadowed the king’s wife, Mary Anjou. The painting seems to reconcile the two realms of divine and mortal existence through the depiction of the nude, which at that time was only limitedly applicable.

The French painter expresses his style and interest through his revolutionary painting, The Luncheon on the Grass. Like most Impressionist works, this artwork features an everyday scene: two female and two male subjects sharing a picnic in a forest. Throughout the times, female nudity in art was represented in the form of mythological figures or idealized beauties.

In this painting, Manet depicts a naked woman, accompanied by two men, wearing modern clothing. She is a modern Parisian woman and not a divine Venus born nude naturally from the sea. It was considered vulgar for an everyday woman to be seen naked, showing that she could be dressed, but she decided not to. She seems naked and not born nude, taking into consideration her discarded clothing in the foreground. She looks directly at the viewer with her hand on her chin. Her body is minimally shaded, making her appear flat on the canvas.

By placing a naked woman in a contemporary setting, Manet broke the tradition of idealized female nudes like the Venus of Urbino by Titian or The Birth of Venus by Botticelli. He simply didn’t conform to the artistic norms. This is evident in another painting, in which he depicted the naked woman in a modern manner – Olympia. Manet’s nude is not an object as she’s not there to be stared at. She’s engaging with the audience, making them question the nature of their intentions and the role of female nudity in art. Manet illustrates his vision with this representation of beauty: to be beautiful is to be natural.

All in all, Τhere are different interpretations of female nudity in art, without any being able to capture a universal truth. For instance, the female model is sometimes presented with luxurious clothes and jewelry and other times naked with exuberant proportions. What is, perhaps, more valuable than interpretation is what an artwork exudes and what makes it timeless. Eventually, it’s worth wondering what matters the most: an artwork that conveys different messages to a single person or a specific meaning to different people.