HomeStoriesA History of British Island Territories in the South Atlantic

A History of British Island Territories in the South Atlantic

The British island territories of the South Atlantic have played an important part in British and world history. 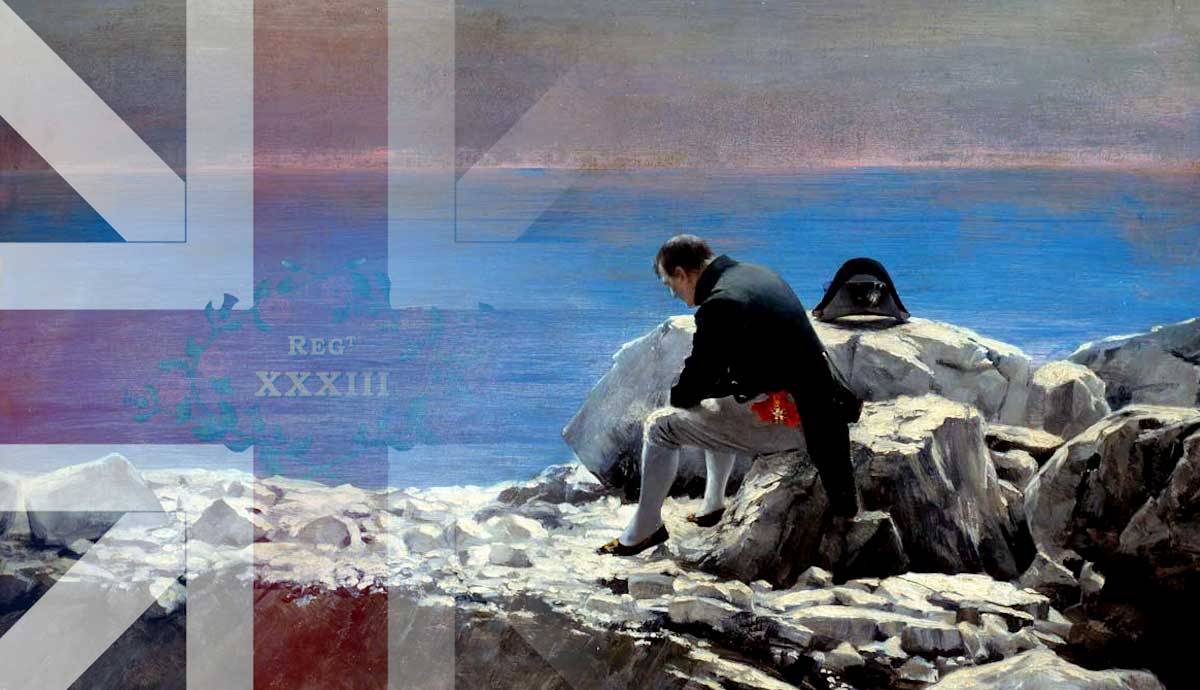 It was once said that the sun never sets on the British Empire. Although the Empire is long consigned to the history books, its geographical legacy persists in a number of forms. At its height and throughout its history, the British Empire was characterized by supreme naval dominance, which led to the exploration and settling of many islands dotted around the globe. Most of these islands are still territorial dependencies of the British Crown, so it can be said that the sun still does not set on the British Empire (or at least its political descendant). The islands in the cold South Atlantic were of great strategic importance and played a major part in shaping Britain’s ability to safely navigate the oceans. Some islands became important British colonies, while others were simply British island territories. Each island has its own unique history of colonization, and some have played significant parts in world history.

In the cold South Atlantic, the British island territory of the Falkland Islands (or Islas Malvinas, according to Argentina) was popularized in public memory in the early 1980s when Argentina tried to make good on its claim to the islands with the use of military force.

In prehistoric times, Fuegians from the southern tip of South America likely visited the Falklands, but until the European colonial era, the islands remained uninhabited. The first landing on the island since then was by English Captain John Strong in 1690. The French and British established the first settlements on the island in 1764 and 1766. They were unaware of each other’s presence, and when France ceded their claim to the Falklands to Spain in 1766, the Spanish discovered the British settlement and captured it. War was avoided, however, and the settlement was returned to Britain.

The Napoleonic Wars saw the islands evacuated of military presence. In 1816, the Spanish Empire was shrinking as its South American colonies started vying for independence. Buenos Aires laid claim to the Falklands, but in 1832, the British returned, officially declaring the islands a Crown colony in 1840.

The economy of the Falklands was based mainly on wool and the ship repair trade; however, the replacement of sail with steamships and the completion of the Panama Canal saw the British island territory become completely dependent on Britain.

The islands played a minor part in both World Wars, being a stop-off point for the British Navy. After the Second World War, the Argentine claim became a serious dispute, and the British considered handing the islands over to Argentine rule. Talks continued for many years, but the Falkland residents firmly opposed any transfer of rule. In April 1982, the Argentinians invaded the Islands, attempting to annex them. The British mounted an expeditionary response and defeated the Argentinians in a high-intensity conflict known as the Falklands War.

First sighted in 1675, it wasn’t until a hundred years later that Captain Cook circumnavigated the island of South Georgia. After making landfall, he claimed the islands in the name of the British Crown and named the main island “Isle of Georgia” in honor of King George III.

In the 1800s, a large whaling industry took hold of South Georgia, and seven whaling stations were founded on the island’s north coast. The industry thrived for a while until rock oil became the primary source for oil instead of whales. The last whaling station was closed in 1965. Sealing was also a secondary industry.

The famed explorer Ernest Shackleton is buried on South Georgia. During a disastrous Antarctic expedition, he and his crew had to sail to South Georgia to get rescued.

The Tristan da Cunha group of islands is the most remote inhabited archipelago in the world, and it lies midway between Cape Town, South Africa, and Buenos Aires in Argentina. Tristan da Cunha itself is an active volcano.

The main island was discovered in 1506 by Portuguese explorer Tristão da Cunha, who named the island after himself. The first landing is disputed. Some sources say a Portuguese explorer laid foot on one of the islands in 1520, but the first official record is that the Dutch East India Company first made landfall in 1643. The Dutch later claimed the islands, but no colony was ever established.

The British ignored the claim and considered the islands for the creation of a penal colony after the American Revolutionary War robbed the British of the ability to send convicts to the New World. No penal colony was ever established; however, American Jonathan Lambert arrived in 1810 with a crew and declared the islands his personal territory. Of the four men who originally settled there, only one survived the harsh conditions.

The territory was formally annexed by the British as a British island territory in 1816 to prevent anybody from using the island as a springboard to launch a rescue attempt of Napoleon Bonaparte, who was held prisoner on Saint Helena Island to the north. The island was garrisoned, and some of the soldiers decided to stay, forming the nucleus of a population that would slowly grow.

In 1885, tragedy struck the island when an iron bark arrived at the islands. Many of the island’s men rowed out to meet them amid choppy seas, but they never returned. Their fate is still unknown, with some stories saying they drowned and others claiming they were taken to be sold as slaves.

The population of this British island territory grew steadily during the 20th century. During the Second World War, the island was used as a listening post in the South Atlantic, and a few small industries were added to the settlement.

On October 10, 1961, the volcano on the island erupted, and the entire populace of 264 people evacuated. They left the island on fishing boats, were picked up by a passing vessel, and transported to Cape Town, whereupon the British fetched them and took them back to Britain. A year later, the island was declared safe again, and virtually all the Tristanians returned.

Forty kilometers (25 miles) to the southwest of Tristan da Cunha lie the Nightingale Islands, rumored to hold buried pirate treasure, and Inaccessible Island, which was briefly inhabited from 1871 to 1873 by Gustav and Frederick Stoltenhoff – two brothers from Moscow. They had intended to create a sealing business, but the inhospitable nature of the island broke their resolve. They were overjoyed to be rescued in 1873.

About 400 kilometers (250 miles) to the south of Tristan da Cunha lies Gough Island, home to a meteorological station run by South Africa (with British permission).

It is disputed when exactly the island was first discovered; however, the Portuguese made the discovery in the early 16th century. The Portuguese used the island for replenishment but did not make any efforts to colonize it. They (and the Spanish) stopped calling at the island due to the activities of Dutch pirates.

The Dutch officially claimed the island in 1633, but they lost interest in its usefulness after establishing the replenishment station at the Cape of Good Hope. In 1657, Oliver Cromwell granted a charter to the British East India Company to take control of the island. The following year, efforts were made to establish a colony, making it the first British colony outside the Americas or the Caribbean. The population grew despite hardships such as vermin, soil erosion, and drought. By the late 18th century, the colony entered a period of prosperity that also saw the importation of Chinese laborers who were integrated into the population.

In 1815, Napoleon Bonaparte was finally defeated and sentenced to spend the rest of his years on Saint Helena island. For the last six years of his life, this British island territory was Napoleon’s home until he finally succumbed to stomach cancer in 1821. As a result, various historical sites on the island are linked to Napoleon, which are important tourist attractions.

In the mid-1800s, the island was an important factor in the fight to suppress the slave trade in the Atlantic. As a result, many thousands of formerly enslaved people were settled on St. Helena. During the wars of the 19th century, Saint Helena played a small but not insignificant part. During the Second Anglo-Boer War, the island housed 6000 Boer POWS. During World War I, a prominent fiber industry arose.

In 2016, an airport was opened on the island, and Saint Helena now hosts regular flights to and from South Africa.

This isolated volcanic island, discovered in 1501, is the northernmost British island territory in the South Atlantic. It was used only as a source of food for passing vessels for 200 years. Habitation occurred in 1701 when 60 men found themselves stranded on the island after their boat sank. They were rescued two months later, and the island again went uninhabited until 1815, when the British garrisoned it for the same reason they did Tristan da Cunha – as a precaution to stop an escape attempt from Napoleon Bonaparte on Saint Helena. Unofficially, however, the island did see the residency of a Dutchman who had been marooned on the island in 1725 for the act of sodomy.

The island became a permanent refueling station for ships in the Atlantic, especially those of the West Africa Squadron, which patrolled the coast of West Africa, suppressing the slave trade.

Ascension Island was noted for being dry and inhospitable. Those who survived there did so by carefully maintaining water from a small spring. After a visit by Charles Darwin, who described this British island territory as an arid, treeless island, another botanist, John Hooker, set about changing the island habitat. A tropical cloud forest was planted on the highest peak, helping to retain more rain and enriching the soil.

During the Second World War, the Island was home to a US military presence and was the base from which several friendly-fire incidents took place, including the sinking of a British passenger ship. The Americans left after the war but returned in 1956 to conduct acoustic surveillance operations during the Cold War. The British also used Ascension as a staging post during the Falklands War.

Representing significant geographic positions in the South Atlantic, the British island territories between Africa and South America have storied histories including war, famine, shipwrecks, ecological disasters, piracy, and a host of other interesting challenges. They have also been places of success, creating life and civilization where there was none previously, helping to create and maintain the power of the British Empire throughout its centuries. Now the islands are each home to unique cultures that enrich the heritage of the South Atlantic.

Francisco Solano Lopez: Who Was This South American Napoleon?